← We are all Aquaman
The Batman and Superman blame game, Pt. 1 →

When we left off, Superman lost a village to an OMAC – a robot/cyborg created by Batman’s former (rogue) satellite Brother Eye, which Batman bought to spy on everyone. And Max Lord, the psychic baddie who commandeered Brother Eye, is psychically controlling Superman to make him do his bidding. There. You’re all caught up. So that’s why Superman’s a bit bummed out in Adventures of Superman #642-643, written by Greg Rucka and drawn by Karl Kerschl, Derec Donovan, Cam Smith, Sean Parsons, Carlos D’Anda, and Rags Morales. It’s for a good reason. Y’see, Max Lord made Superman try to kill Batman. He got pretty close. Click the pictures below for a larger version if you so desire.

Everything I’ve shown you is important, I promise. It all leads to a single poignant conversation about personal responsibility that’ll pierce the very vortex of your comic-book-loving heart (well, maybe not now that I’ve hyped it up so much). Look, Superman always does the right thing no matter what, no exceptions, because Superman is Superman and the most perfect physical, mental, and emotional being in fictional history. So when the writer wants Superman to do something murder-y, another separate force must take over the Man of Steel. Superman didn’t mean it! He was under Max Lord’s control! Which, while totally a legitimate excuse, doesn’t make these next few pages feel any better. 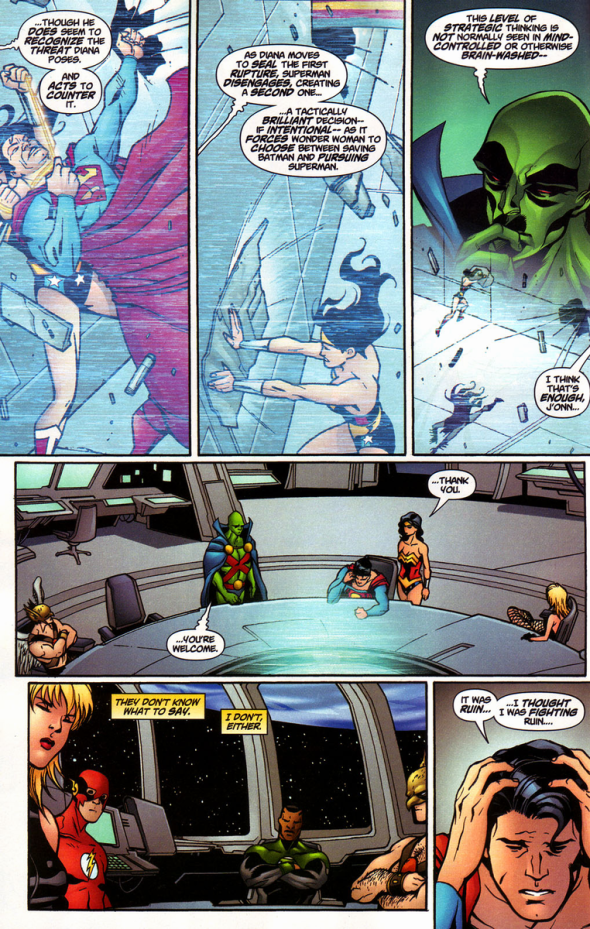 After this, he gets psychically taken over one more time for a brutal Superman versus Wonder Woman fight. Then Wonder Woman breaks Max Lord’s neck. And even after this whole Max Lord episode ends – both Wonder Woman and Superman in pretty terrible shape (and Max Lord dead) – our dear protagonist has to immediately save the world from a runaway missile. Crime never sleeps, especially not in a universe with fifty different series to fill every month. Oh, and in Superman’s thought boxes, he’s talking to Lois Lane (remember when those two used to be married?).

Brother Eye, who still operates for the most part even without Max Lord, doesn’t really get dealt with until Infinite Crisis (which occurs months after this), so the OMACs still run rampant. And most importantly, there’s a little secret about these whole OMAC creations that Superman doesn’t find out until right now. You know how I referred to them earlier as cyborgs? Turns out no one told the Man of Steel, so he has to find out the normal method – letting a tiny bit of his infinite power loose followed by immediate and overwhelming shame. 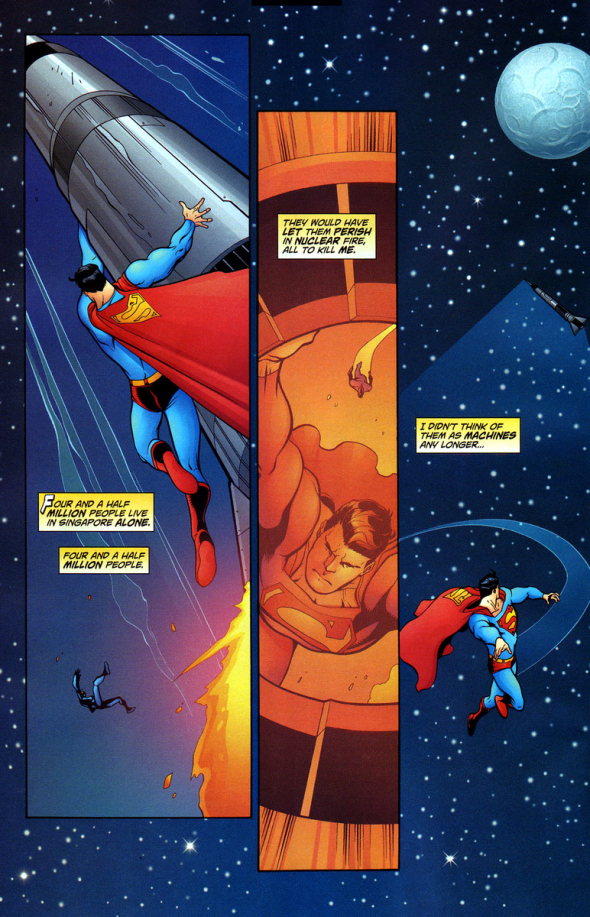 Finally, we reach our conversation. With the thirty-ish pictures you’ve read and everything I’ve explained, you should understand every reference and argument the two make. Will this all be worth the immense amount of time I’ve spent building up to this? Look, let’s not worry about that. It’s an important conversation with an important message at the end – a message that’s not brought up enough about both of the characters’ most glaring flaws.

Both of them are correct, of course. But since the DC universe walks the super thin line between spandex-wearing cooks punching moons and the actual moral quandaries of our real life world, we always get left with more open-ended questions than any sort of satisfying answers. The only thing I’m sure of is that if guilt was kryptonite, Superman’d be a dead man. I’m leaving with you with the final page of this issue, which consists of Superman sobbing into the arms of his loving wife. I know it’s a bummer. But it’s important for us to read. Right?

Something happy next time!

One Comment on “The Batman and Superman blame game, Pt. 2”