Everything you’re going to see today and tomorrow leads to a single conversation between Superman and Batman – all 40-ish pictures involving explosions and OMACs and betrayal and spying and mind control and missiles and everything else. We’ll weave five separate stories together in a coherent knot that eventually ends up on the complicated idea of personal responsibility. I know that’s not as exciting as missiles, but it’ll be more satisfying. Probably. Most likely. Let’s start with a scene from Superman #217, written by Mark Verheiden and drawn by Ed Benes. Superman and Lois are currently hanging out in Peru, helping people and reporting news and whatever else. Terrorists, already once foiled by Superman, threaten to blow up the local village’s dam. I want to proclaim that this looks like a job for you-know-who, but I cringe every time I start to write that. It’s an OMAC! Shortened for Omni Mind And Community, they’re crazy powerful robots/cyborgs. We like to think of a superhero’s job as beating up supervillains, but a more accurate description would be saving people from supervillains. The bad guys only exist as obstacles to prevent a superhero from accomplishing his chosen bloody career path. So think of OMAC as the jammed printer that’s preventing Superman from submitting his report on time. And then think of that printer being kicked repeatedly. 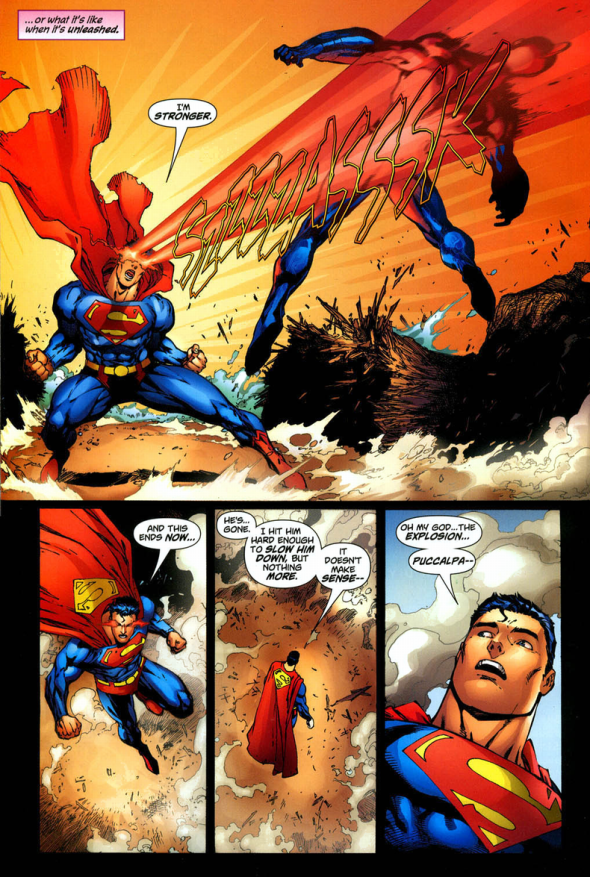 I know we don’t like mopey Superman. Batman doesn’t cry or be emotionally vulnerable like the Man of Steel. But, because Superman’s perfect, he must be as sensitive as he is masculine. A real man wouldn’t be ashamed to shed tears or sit in the dark sadly when he fails since a real man has no need to impress anyone. Hence for all of Superman’s embarrassing weeping, of course he cries. It’s just one more thing he’s better at than we are.

I’m upset too. We’re moving on to a scene from The OMAC Project #2, written by Greg Rucka and drawn by Jesus Saiz. Don’t worry, Batman doesn’t fail in this scene as that would be too difficult to believe. To understand the importance of what’s upcoming, we must jump back to the greatly hated DC event Identity Crisis. If I can be honest, while really dark, Identity Crisis wasn’t that bad. When Batman stumbled upon Zatanna and other members of the Justice League mindwiping the supervillain Dr. Light (to erase his knowledge of the superheroes’ secret identities), Zatanna had no choice but to mindwipe Batman as well. The Dark Knight only deals in black and white, y’know because he refuses to operate in that logical gray area of morality. In response to his friends’ betrayal, and in a move that’s a huge gray area, Batman builds a giant satellite that can spy on everything and everyone in the world, basically wiping out privacy.

Max Lord, psychic supervillain, stole the satellite. He also killed the Blue Beetle, hence why Booster Gold’s a bit upset. Note that before Blue Beetle died, he went to Batman with this information and Batman brushed him off, thus forcing Blue Beetle to confront Max Lord by himself. And Max Lord shot him, something he wouldn’t have been able to do if any of the Justice Leaguers had accompanied Blue Beetle. It’s complicated. But most importantly, Booster Gold makes a poignant observation: It’s a strange double-edged sword. Since we as readers get a full view of Batman’s life that the other superheroes don’t, we know that of course Batman takes blame for his mistakes. He takes all the blame to the point where it’s unhealthy (ex. Jason Todd’s death). But Batman also doesn’t have the emotional capability to show vulnerability. Or show emotion or have normal human feelings or trust others. Even Superman – arguably Batman’s best friend – doesn’t get the heart-on-the-sleeve Bruce Wayne. But also, of course Batman doesn’t take blame with the others around. He doesn’t have superpowers. He’s a normal dude hanging out with gods. So the first time he admits his mistakes, he acknowledges that his contributions to the Justice League (almost entirely his detective skills and information network) might not be perfect. And then Batman’s just a normal dude in a Bat costume and certainly not the perfection incarnates (Superman, Wonder Woman, Martian Manhunter) or powerful meta-humans (Flash, Green Lantern, Aquaman) that he has to always competing with.

But today’s connected by a single thread: OMACs. Brother Eye (Batman’s hijacked satellite) creates OMACs, and Max Lord controls Brother Eye, both of which are the pillars of despair that will define Friday’s article. It’ll make sense, I’m pretty sure. 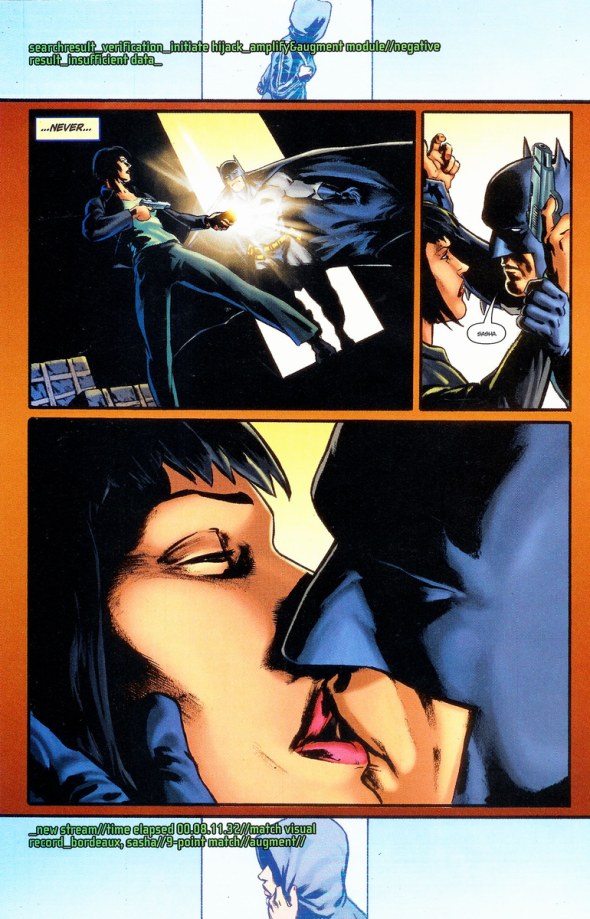 To be continued indeed! My convoluted conclusion next time!

3 Comments on “The Batman and Superman blame game, Pt. 1”