Ursa Major will maul your heart

Let’s cut to the chase today.  Why spew paragraph long introductions when I can simply show you? 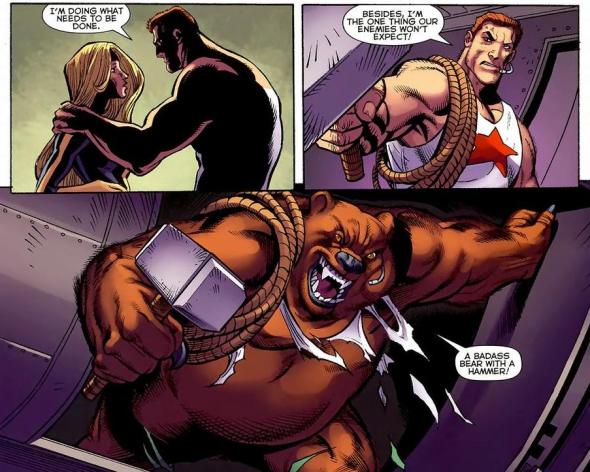 Russian superheroes have been around longer than you think.  Superspy Black Widow (played by Scarlett Johansson in The Avengers) first appeared in 1964.  The X-Men Colossus made his debut in 1975.  But unlike those two, Ursa Major never left Mother Russia and his superhero team Winter Guard is mainly used to antagonize more famous heroes over obvious political misunderstandings.

Luckily, he’s cocky and insane.  Which makes for a delightful combination anytime he shows up to claw The Hulk over a lost Cold War magic elixir or whatever.

The last panel brings up the entire reason for this post.  He takes out the robot made of a million bombs.  Boo-Boo pats him on the back.  And in his mighty victory, he announces:

About that.  I don’t mind trash talk on the battlefield or the basketball court.  It usually makes everything way better anyway.  Except Ursa Major is making a bold claim.  Sure, he’s a crazy foreign bear monster.  Yeah, he’s gone up against some powerful foes.  But always wins?   Hell, Superman constantly gets superpowers made up just for him and he still gets frequently outwitted by the Donald Trump of the DC universe.

So Ursa Major, the prosecution would like to present evidence at this time: 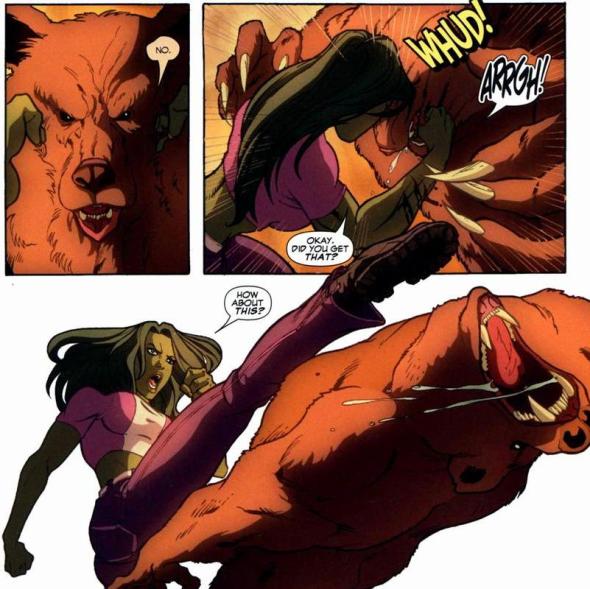 Fairly safe to say that his bragging may need to be tempered a tweak.  Now it’s not that he’s a terrible character or an awful fighter.  But when the series is called She-Hulk and you come lumbering up to smack her in the face, odds are not in your favor.  And despite the Animorph abilities of Russia’s finest, there’s really not much you can do with Ursa Major.  Will his bear strength be enough to take out the bad guys?  I hope so, because that’s his only angle.  He’s a fun character to have in an issue or two, but how many environmental terrorists or evil park rangers can he really fight?  At least Beast is a super genius.

As you’ve guessed, the poor guy is a joke in the Marvel universe.  He’s one of the first surviving mutants from the Soviet Union.  He’s loyally and fiercely fought for his country his entire life.  But unfortunately, he’s also a giant bear. 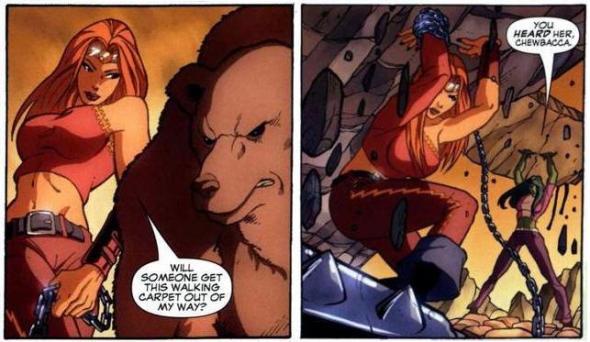 Even the Invisible Woman a few panels back made a crack at Ursa Major, and she’s a loving mother of two.  Thankfully, he and the Winter Guard are still alive and well, still fighting Russia’s enemies, and still available as a foil for any superhero who needs to pound the forest king.

Want to know what he’s been up to lately?  Oh, nothing much:

2 Comments on “Ursa Major will maul your heart”