Let’s jump right into this.  We’re going to talk about the Hulk.

What has made Hulk so popular can be boiled down to two major points:
a) The eternal inner battle between the meek scientist Bruce Banner and his avatar of rage Hulk.
b) Lots of smashing.

In 2006 and 2007, Hulk was shot into space and sent far away from Earth because y’know, he’s super dangerous.  Well, his spaceship made a wrong turn and instead of a happy planet full of flowers and butterflies, Hulk landed on a violent gladiator planet.  Because he’s the Hulk, he fought his way to the top and married a hot space alien (I guess?).  One day, his spaceship exploded, killing his wife.  But who sent him away in that spaceship in the first place?  Yeah – Iron Man, Dr. Strange, Black Bolt, and Mr. Fantastic.  They called themselves the Illuminati, along with Namor (who dissented to the Hulk launch) and Professor X (who wasn’t there).  So Hulk, pissed off, flies back to Earth to take his revenge on those that betrayed him.  Start the major Marvel event World War Hulk.

Since everyone has seen The Avengers movie, you know how strong the Hulk is.  Though what makes the Hulk so scary in the comic world is that he has no set level of strength.  The angrier he gets, the stronger he is.  Add that to a healing factor that rivals Wolverine, and he’s potentially the toughest being in the entire Marvel universe.

A three issue miniseries, World War Hulk: X-Men written by Christos Gage, follows Hulk as he goes to the X-Men mansion to have some “words” with Professor X (real name Charles Xavier).  And because you can probably guess how comics go by now, that means fighting all the X-Men.  Like all of them.  Versus Hulk.  And it’s awesome.

See?  This isn’t your dad’s Hulk.  He’s smart, armored, and hasn’t smiled in months.  Will the X-Men hand over Xavier like the green monster asks?  Of course not, because we have three issues to go.

First up, Hulk’s going to smack around the New Mutants.

Like the Avengers or Spider-Man villains, the roster is gigantic and you really only care about half of them.  I know you haven’t heard of these X-Men.  Y’see, when not fighting Magneto, the X-Men are essentially running a school.  And since all the original class are probably in their 30s now, a fresh crop of students is necessary.  Like the New Mutants.  They’re cool, trust me.  But it’s still the Hulk punching a bunch of teenagers (and Beast). 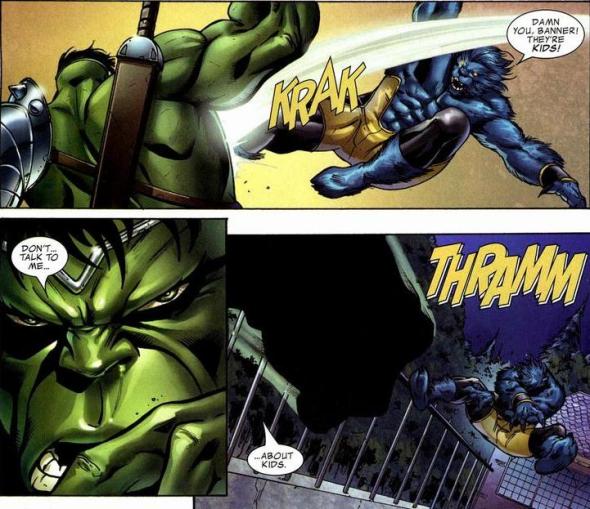 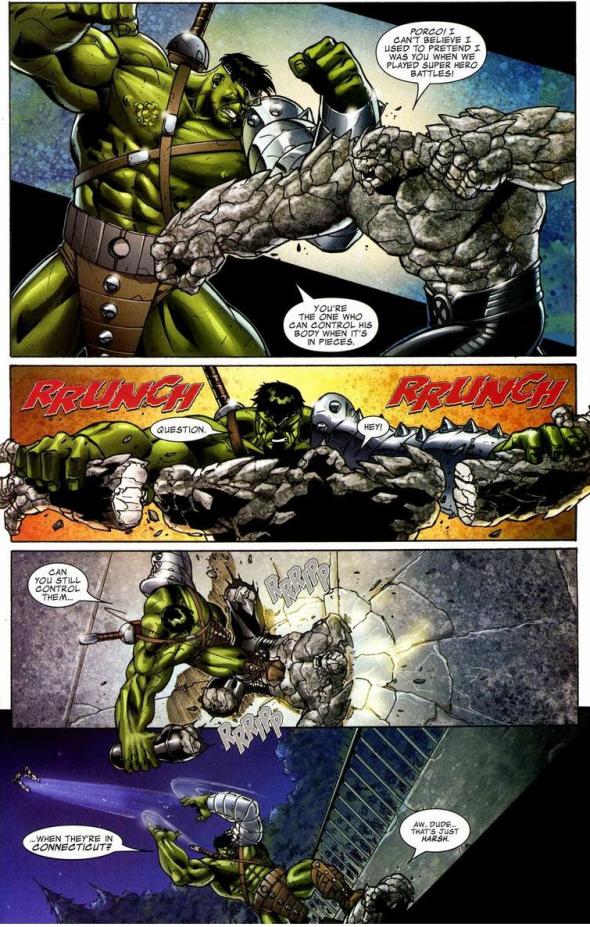 Professor X may be a bit of a dick (a recent revelation, unlike the movies where he’s charming James McAvoy with a full head of hair), but he’s still a good guy.  And you have to be a real douche to stand around while children are being ripped apart by the radiation monster who declared war on Earth.

By this time, the famous X-Men you know and love have arrived.  Xavier and Hulk have a little chat.

I’d be irresponsible to mention that this miniseries takes place about half way through the event.  Hulk and his army have already subdued Iron Man and Black Bolt.  He’s moments away from victory against both teams of Avengers and the Fantastic Four.  Being the super psychic genius Professor X is, he’s well aware of the consequences.  But Charles admits the truth.  Damn right he would have voted yes.  So y’know, round two: 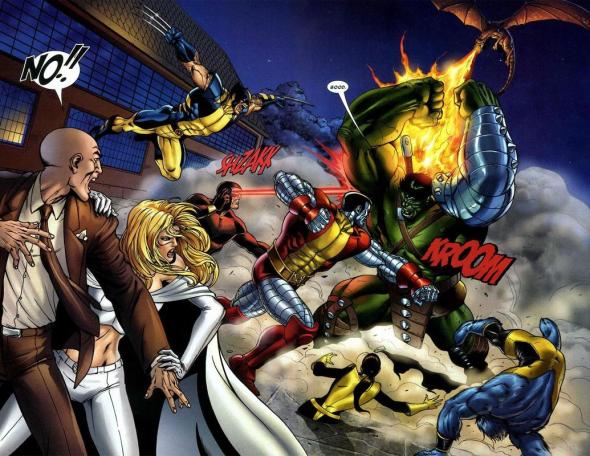 How’s the fight go?  Shall we find out? 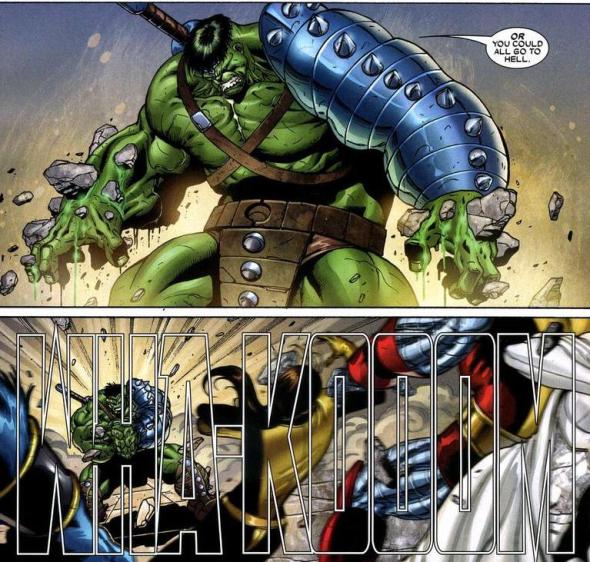 Not well.  Though one furry Canadian mutant is still left.  Y’see, Wolverine and Hulk have some history.  Wolverine’s first appearance in comics was as a Hulk villain.  Plus, Wolverine can heal, take massive amounts of damage, and his adamantium claws can actually pierce Hulk’s skin.  How do you deal with an enemy that can take everything you dish out?  Unfortunately, dumb Hulk disappeared years ago.

And round two goes to Hulk.  It wouldn’t be a stretch to say that Professor X saved many of these mutants from lives of society’s rejection and gave them a family they never thought they would have. Sure, he trains them to be soldiers, but if you could shoot fire from your hands wouldn’t you want to learn how to fight?

Luckily, the arc isn’t over yet.  One more team, one more round against the green gamma beast with fists as big as their torsos.

Don’t count the X-Men out yet.  I mean, there’s only Nightcrawler left, but he’s a tricky little mutant. And while kicks to the face aren’t going to faze Hulk, Nightcrawler can totally teleport the big guy. Hulk’s a bit too massive to warp farther than a few hundred feet, but that’s plenty of room for the classic Drop the Plane on the Raging Brute scheme.

Yay!  Call the ref and ring the bell, because this fight is over!  They X-Men can go back to their bunk beds and make s’mores and have the algebra test as scheduled tomorrow.  Oh, never mind. 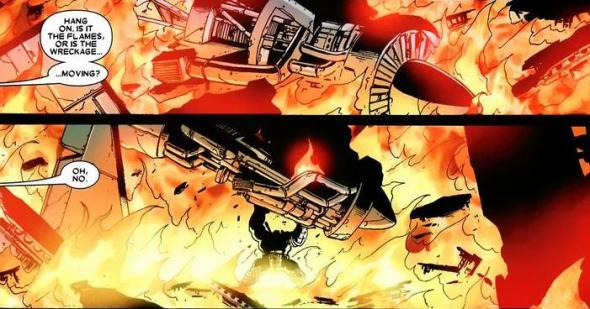 No more X-Men.  They ran out of reinforcements and looks like Professor X is going to Hulk jail.  Wait, what do you see out of the corner of your eye?  Is that the potential savior approaching the battlefield? Who possess balls enormous enough to challenge the Hulk after just beating down three squads of mutants?  Can he turn around the battle and redeem himself for the past mistakes and atrocities he’s committed?

But you see, in the timeline of comics, no group has suffered the discrimination and agony that the X-Men have endured.  Their past, present, and future have all been revealed as tragic, horrible struggles against the forces of hate and inequality.  You know who might be able to relate?  Yeah, Hulk.

Don’t forget that as many X-Men as he’s just punched, this all started because the happiness Hulk brutally fought for was taken away from him in a single vindictive, explosive flash.  Certainly, he has a right to revenge.  Except despite Xavier’s confession, he didn’t actually vote to send him away.  That and the entire history of the X-Men: 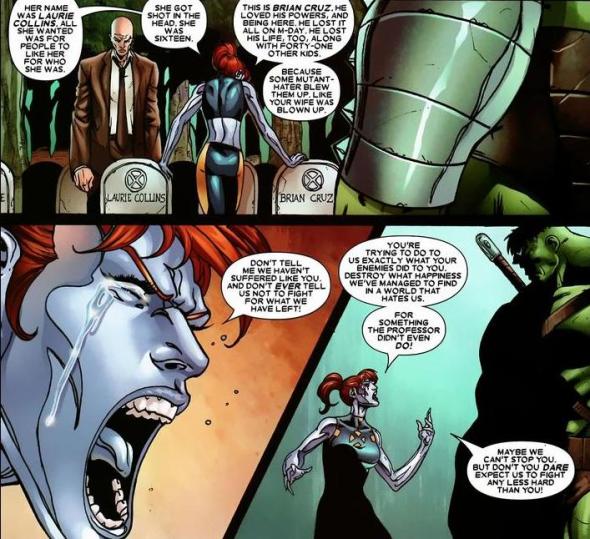