I love these two characters.  The blind ninja and the gun-toting vigilante.  Did you know they don’t get along?  Well, I mean, the Punisher doesn’t get along with anybody.  Plus, he probably smells like gunpowder and sewer mist.

In summary, the Punisher (Frank Castle) plans to kill a bunch of mobsters and Daredevil (Matt Murdock) wants to stop him.  Not because Daredevil likes mobsters.  Oh, he’s busted in plenty of mafioso skulls in his day.  But because he’s a superhero, Murdock has to work his butt off to make sure people don’t die.  That’s just part of the job description.  Even criminals.  So in the Daredevil vs. Punisher miniseries, written and drawn by David Lapham, the two brawl over that whole jail vs. grave debate.  Also, don’t you want to see who wins?

The Punisher has a mob boss in his sniper sights.  His weeks of recon and planning are finally going to pay off.  Except for a flying billy club blowing his position.  Well, that and the man it belongs to. 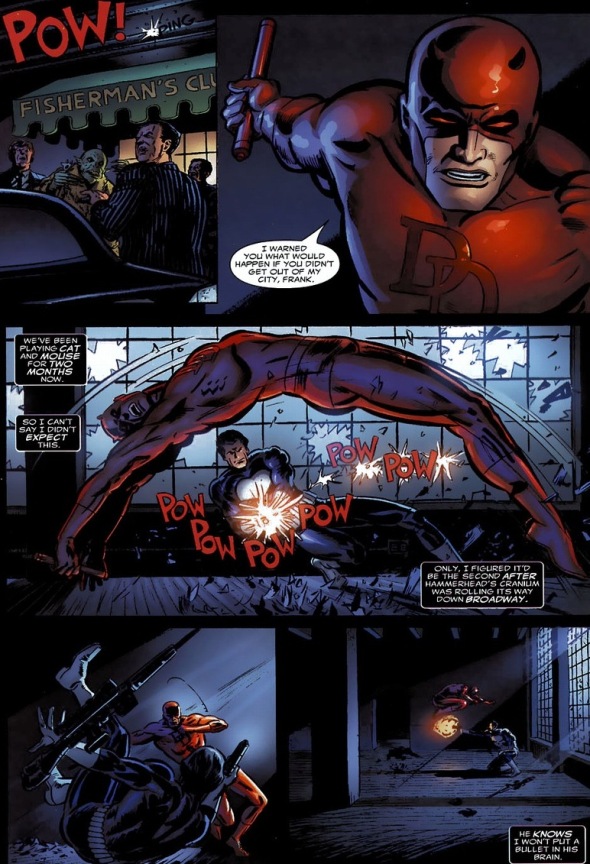 Daredevil is a phenomenal fighter.  Not only does he get all those heightened senses, but he’s mastered almost dozen martial arts.  And frankly, the Punisher can’t compete with that.  Sure, Castle has decades of military training and hand-to-hand combat, but a flexible ninja gymnast he’s not. 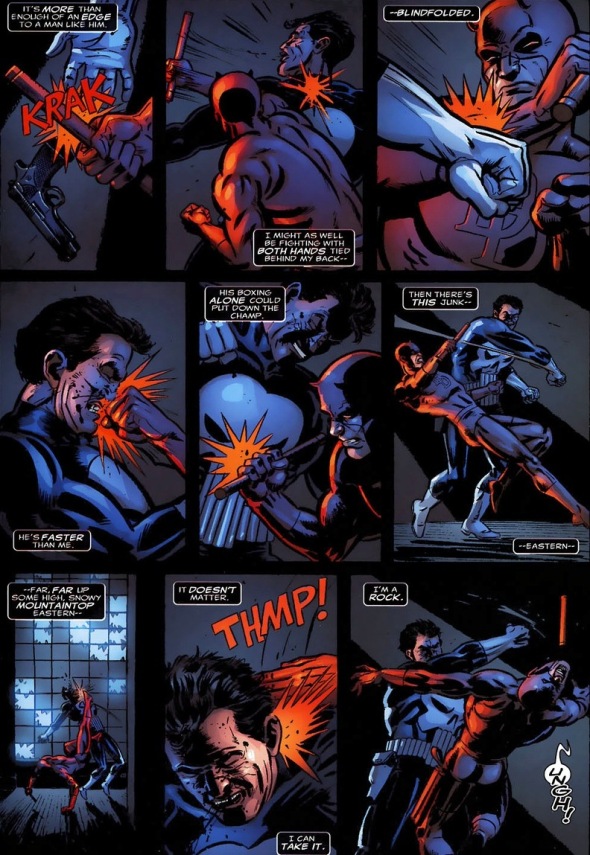 Though the Punisher does have one combat ability that may be better than any other Marvel street-level superhero.  He’s crazy tough.  As in his pain tolerance would make a doctor quit the profession: I’m talking a crapload of billy club whacks.

The Punisher ran, so I guess that’s a sort of win for Daredevil?  I guess not really.

Castle is just trying to go about his business and interrogate a bad guy before killing him.  Nothing new.  But once again, the hornhead has to interrupt the Punisher’s good time. 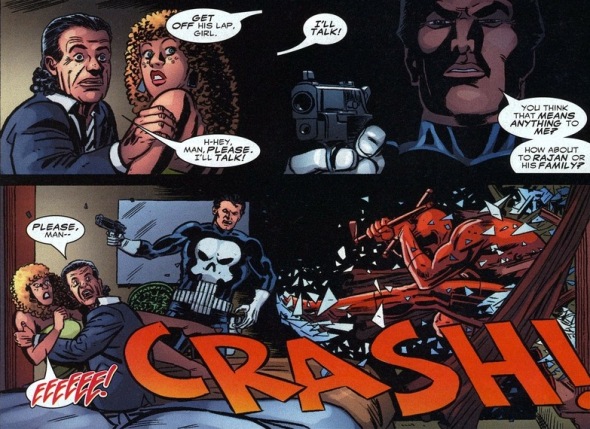 Who says the Punisher ain’t a sweetheart?  His black and white moral code won’t let him kill people who aren’t criminals.  Like Daredevil.  But luckily, there’s nothing in his morality that says he can’t beat Daredevil close to that.

Since Murdock happens to be a lawyer in his secret identity (New York State Bar certified and everything), he’s a big fan of using the law to put criminals in jail.  Sadly, before either of the two can use their preferred methods of justice, something interrupts their rumble. 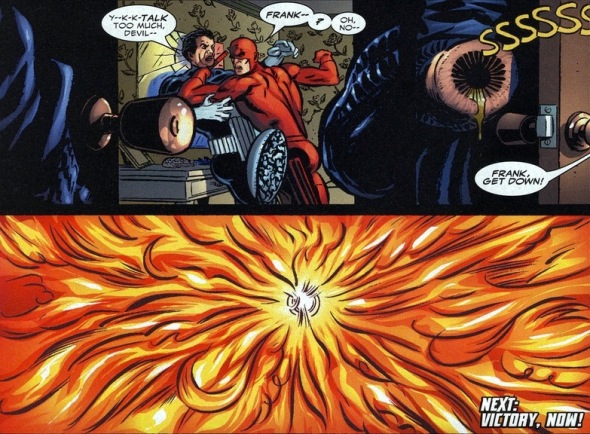 Flamethrowers always get in the way of fistfights.

This match goes down a little bit differently.  The Punisher, instead of getting jumped by Daredevil through an open window or warehouse rafters, sets a trap for Murdock (a van outside a gas station). With the battle on Castle’s terms, will he fare better?  Sorta.

Does he make the shot? 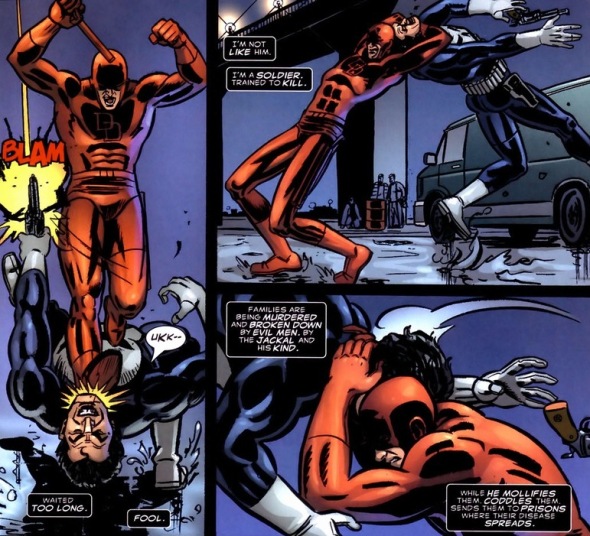 Nope, because we still have one more round after this.  Politically and morally, I could go in depth to discuss the psychological decision each one makes to deter crime.  I’m not.  Leave that to the professors and other dudes way smarter than me.  Because despite whatever reason gets the two together, they’re both highly-trained, highly-skilled fighters and it’s fun to watch them fight – like UFC with less humping.  Plus, whole messageboards are devoted to what-ifs like this. 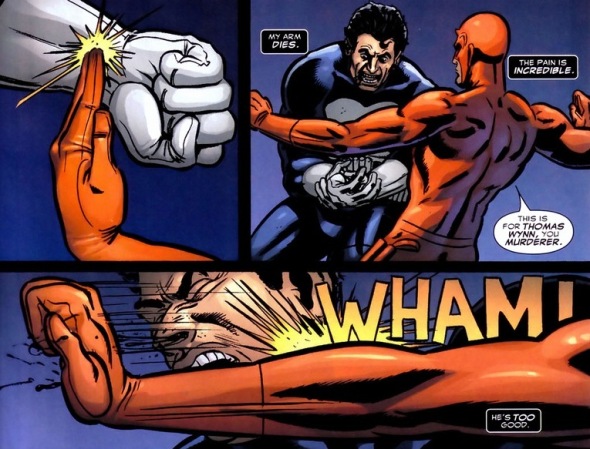 And now things go badly.  I’m not really spoiling anything by telling you that Daredevil’s going to claim victory.  But besides physically, can the Punisher also lose mentally?  All it takes is bad aim.

Here we go.  The climax of the mini-series.  Stay seated and buckled in.

Yup, not really a game anymore.  Don’t you love moments like these?  Neither are holding back and neither are going to stop until the other is, I guess, not able to walk anymore.  Oh, and enjoying the light-hearted Punisher commentary?  Did you know he doesn’t have any friends? 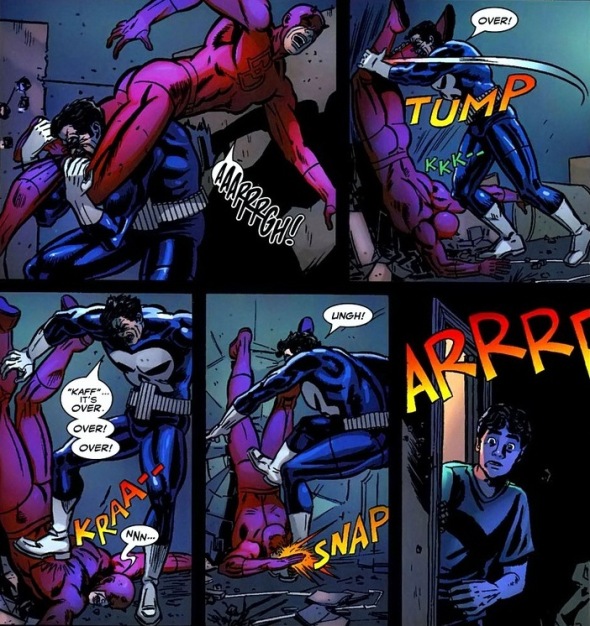 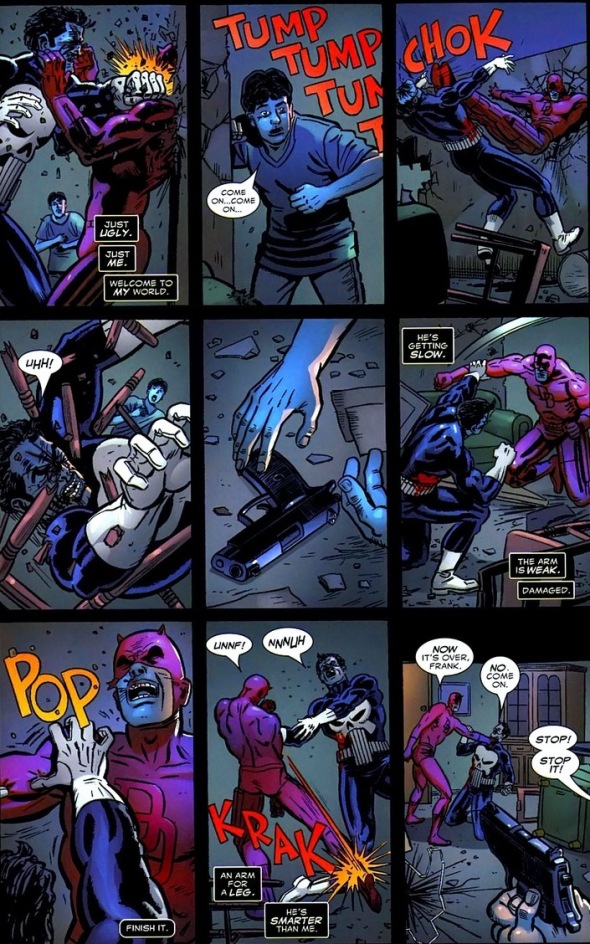 Right when you think the only winner will be the hospital bill collector, that boy you saw earlier?  He’s calling a brief ceasefire.  Y’see, I’ve skipped over all the stuff like plot or character development, but turns out the kid’s on the run from mobsters.  Who have been scaling the building the entire time the two warriors have been breaking each other’s limbs.

How could I pick a winner when most of their fights have been interrupted?  Because the battle’s not just how well one throws a punch (though that’s most of it), but also who does all the clean up.  Like the cops.  Who favor Daredevil. 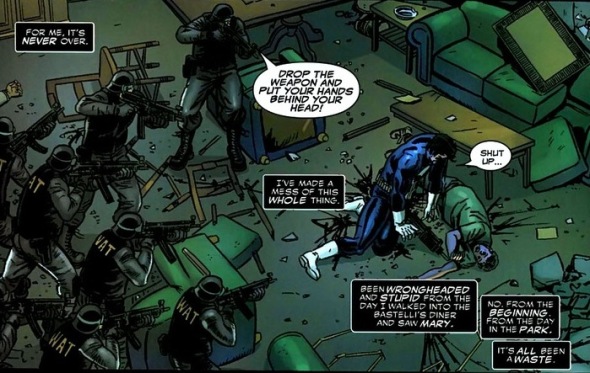 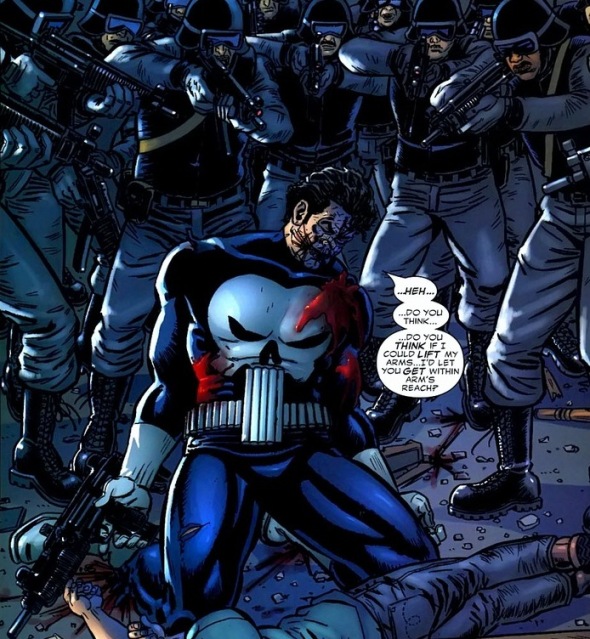 Feel good story of the year, right?  I claim victory for Daredevil, if only because at the end of the series, he doesn’t end up in jail.  Yet.  We’ll get to that story one day.

4 Comments on “Daredevil vs. Punisher”