I don’t know about other countries, but here in the United States, we suffer from a bad case of patriotism.  No matter how terrible our decisions, our government, and our schools, America is and always will be a super amazing, incredible country.  And no matter how insanely ludicrous that idea is, you’d be hard-pressed to find a citizen who disagrees.  To keep up with our ideals against the fiery backdrop of reality, our veins need to be pumped with constant inspiration, courage, and hope.  Well, how about having the captain try his hand?

Y’see, I have previously stated my two major opinions about Captain America (Steve Rogers).  First, he’s the moral center of the Marvel superhero world that all other superheroes aim to emulate.  And second, I don’t think non-comic book fans give Captain America the amount of respect he deserves.  If you’re of the latter, I present to you five different speeches in which I hope to change your mind.

Jump into Amazing Spider-Man #537, written by J. Michael Straczynski and drawn by Ron Garney. We’re in the middle of the superhero Civil War, with the good guys split over the government mandated registration of superheroes.  Spider-Man, in support of the act, revealed his identity to the world (oops).  He goes to Captain America for advice on the crazy backlash that followed.

Did you know Rogers isn’t know for his sense of humor?

As you may have realized, Captain America is the leader (because he’s the leader of everything he joins) of the underground resistance movement, fighting the government and former allies against the heinous law.  If you read the issue, he recites a very long Mark Twain quote, but the heart-pounding, fist-raising inspiration is after that: 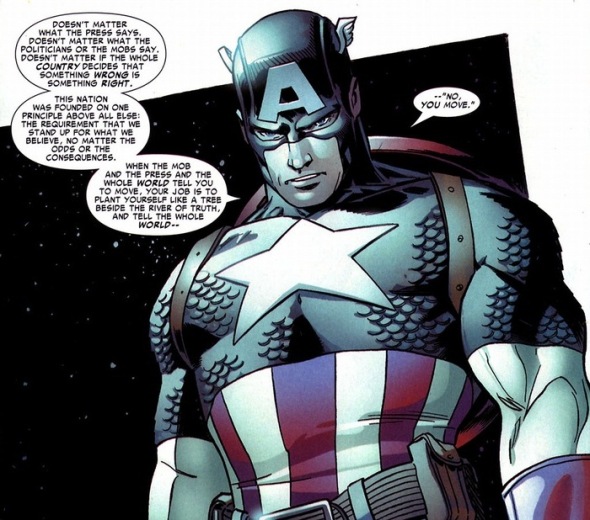 Sure, he eventually lost the Civil War, but there was no doubt in the readers’ mind that his side was definitely the good guys.

The good captain made his debut as a propaganda tool, that shouldn’t be shocking.  He punched and kicked his way through World War II with his personal team: two androids that could light themselves on fire, a flying ab-licious Atlantean, and the surprisingly deadly teenage sidekick.  But you saw the movie – he ain’t going to neglect all the normal, vulnerable-to-bullets soldiers.  Plus, it gives writers the chance to place him in the biggest battles of the war, like in the Dark Reign: New Nation one-shot, written by Brian Michael Bendis and Jonathan Hickman, and drawn by Stefano Caselli.

Because of an invulnerable shield and high-impact armor? 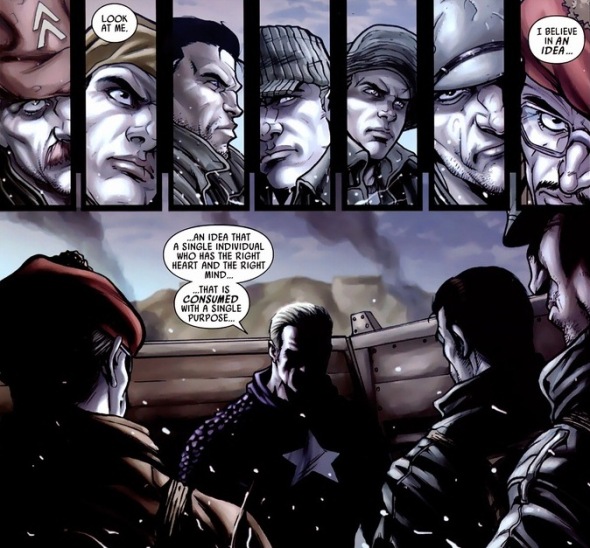 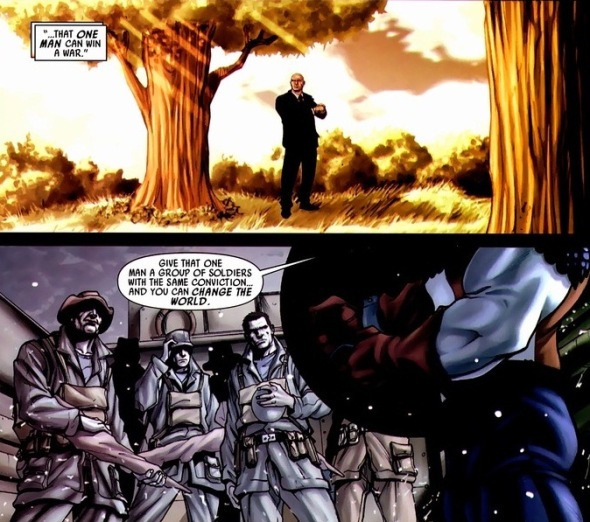 The captain isn’t even carrying a gun when he storms Normandy.  He’s going to take down the entire Nazi army with his fists.  Plus, the bright colors make him a fairly easy target.  Yet, he charges full-speed into the fray.  Yeah, he’s faster and can jump higher than the other soldiers, but he’s certainly not a god or Hulk.  And he fought in all the major battles of the war.  Rogers may look Aryan, but no one represents America better than this man.

Let’s do a short one.  More of a declaration than a full-blown speech.  Back in Captain America #16-17, volume 3, written by Mark Waid and drawn by Andy Kubert, his arch-nemesis (and Nazi) Red Skull, finds the cosmic cube that grants magical wishes or whatever to its beholder.  So now the evil skeleton can do this: 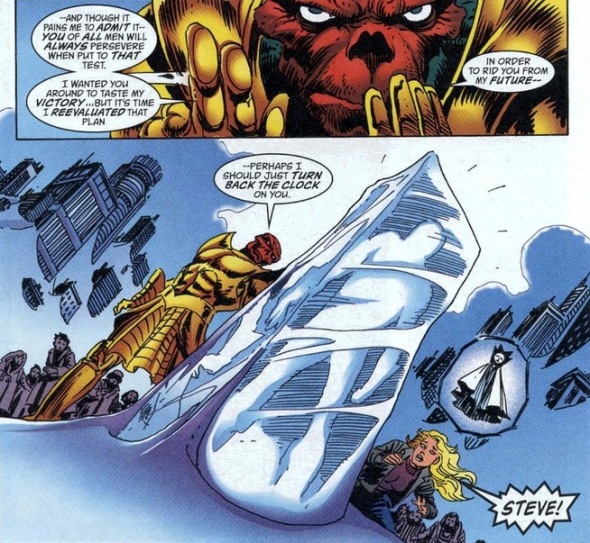 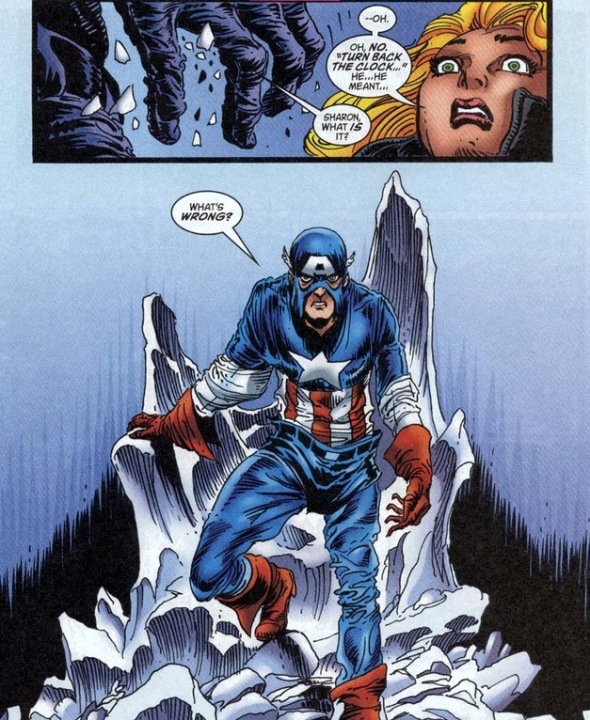 Uh oh.  Now all his super serum disappeared and he’s back to his tiny 97 pound original body.  The same body that was rejected from the army because of illnesses.  But c’mon, Captain America can still take on just one superpowered bad guy in this weakened form, right?  What other tricks could Red Skull possibly have?

Oh, a dinosaur army.  That’s not good.  How are you going to save us, Captain?

He uses that strength to kick Nazi butt.  Severely.  In the famous mini-series The Infinity Gauntlet, cosmic powerhouse Thanos gathers up the infinity gems and becomes an actual god.  And the superheroes are wiped out.  Finally, only Captain America remains and he stands up to Thanos, not because he stands any sort of chance of victory (he doesn’t), but because someone needs to.  Also, it makes the heart fuzzy and brave.

We’re jumping dimensions into the Ultimate universe, where this Captain America tends to be a little rougher around the edges than the normal captain.  Here, in Ultimate Nightmare #04, written by Warren Ellis and drawn by Trevor Hairsine, Captain America, Nick Fury, and the X-Men explore an abandoned Soviet Union science lab.  Right as we’re about to find out the juiciest of the secrets, a single man blocks the hallway.  A crazy man.  Oh, he can explain himself:

Now you can’t argue with me that after this, Captain America isn’t a gentleman: 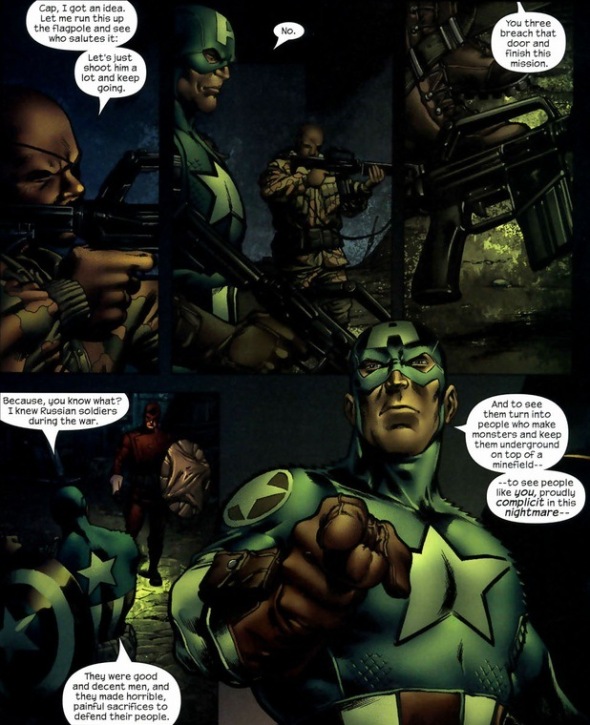 Spoiler alert: Captain America wins.  Y’see, Rogers can’t lose, because he’s the symbol of American strength and excellence.  Why do you think his rogue gallery is packed with Nazis and Cold War lingerers?  Because they were the forces that threatened America as a country.  And it’s up to our captain to protect us.  All I’m saying is that when Spider-Man fights Electro, the ego and reputation of an entire nation doesn’t hang in the balance.

Our final except today is from Captain America #7, volume 3, again written by Mark Waid and drawn by Andy Kubert and Dale Eaglesham.  A shape-shifting Skrull disguised himself as our hero and used his influence to cause a bunch of havoc and destruction.  In order to prevent something like that from happening again, Captain America sets the record straight on exactly what his role is in this wonderful country.  And I’ve never felt prouder to be an American. 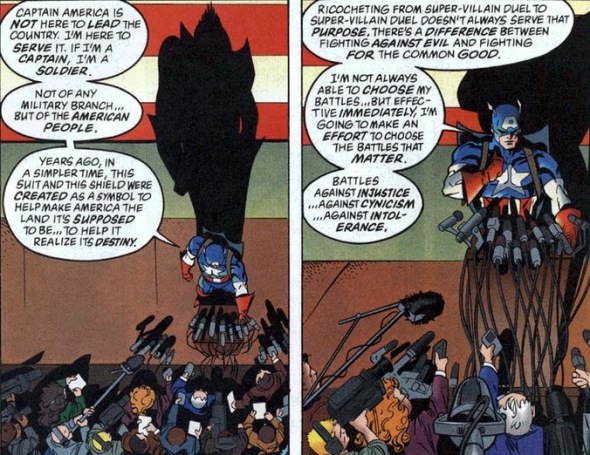 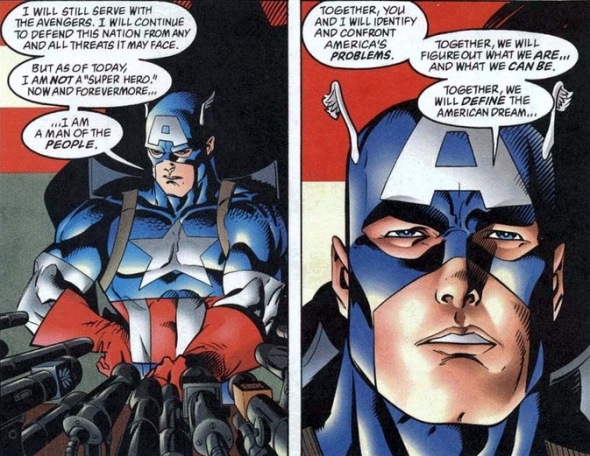 Feels good, right?  Because despite all of our problems (and there are a ton), America is held fast in its united belief that anyone from anywhere can come here and make something of themselves, regardless of previous background or experience.  And it’s nice to have someone (albeit fictional) watching our backs while we pursue our dreams.

Now if you’re a huge Captain America fan, you must have realized I’ve skipped one of the biggest, grandest, and most influential speeches he has ever said, the incredible and famous What If? #44.  I highly recommend you find that issue and read it yourself, but I’m not going to talk about it, because other websites like this and this have covered it far better than I ever would.  Go read about it there.

You agree that Captain America is awesome, right?  And that he deserves every ounce of respect you can squeeze from your patriotic brow, right?  Good, then I can sleep easy tonight.