We all know about Spider-Man (have you seen the movie yet?).  He’s silly, poor, a genius, and full of great responsibility/power.  Also, he just so happens to be single.  And looking at his past relationships, Spider-Man tends to prefer a certain kind of woman.  Attractive, yes, but in comic books, you’d be searching for a long time to find an ugly one.  I don’t know why only models get superpowers.

But most importantly, his women are sassy and tough.  Black Cat was so sassy and tough that their relationship became practically emotionally abusive for Peter Parker.  Though, and this is strictly my personal opinion, of all the superheroes running around, Spider-Man takes more beatings than really any of the others and maybe deep down, a small part of him likes it.  I, of course, have zero proof, no psychology training and my college degree is in English.  But y’know.

Anyway, cut to Ms. Marvel #34, written by Brian Reed and drawn by Paulo Siqueira and Adriana da Silva Melo.  Ms. Marvel, now just plain ol’ Carol Danvers, has been stripped of her powers.  Still, she ain’t going to let stuff like being vulnerable to bullets stop her, so she tries to get some package or something from a warehouse pier full of government goons.  Or something.  I skimmed the issue.

Luckily for her, our friendly neighborhood Spider-Man shows up. 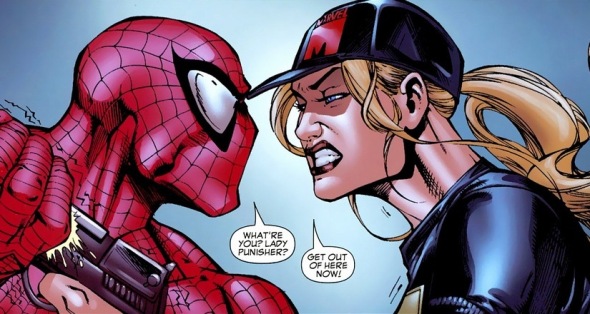 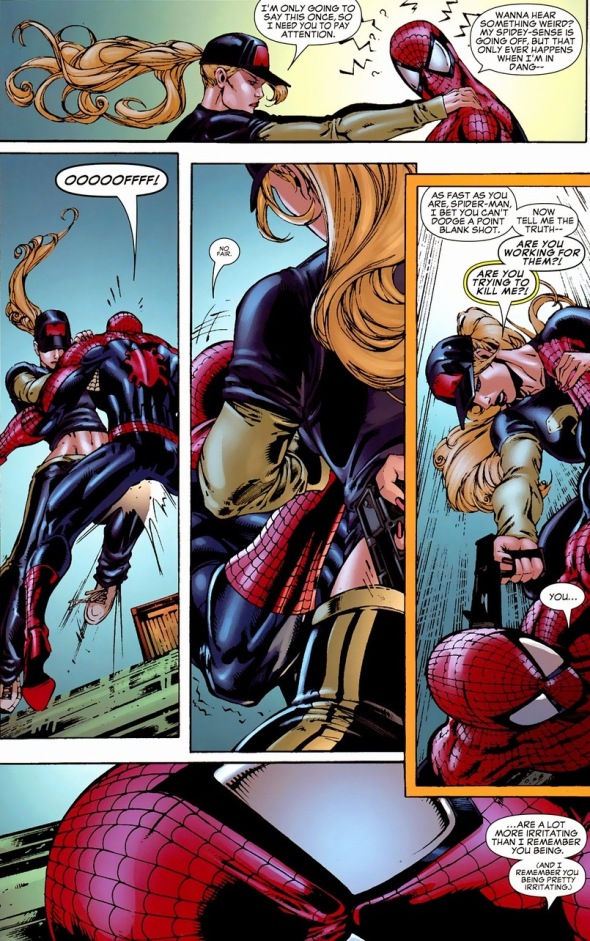 Despite her unfriendly welcome, the two team up and save the day.  The issue concludes with this adorable moment: 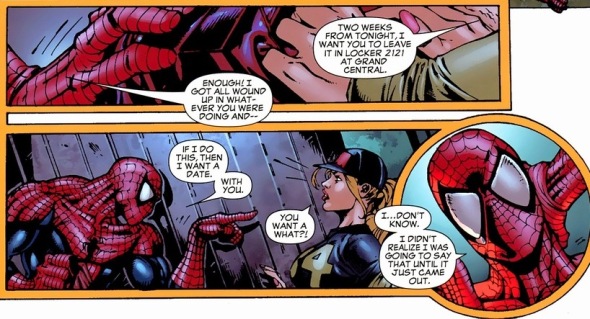 She agrees, and thirteen issues later in Ms. Marvel #47, we get to see The Amazing Spider-Date (actual title).  First though, they have to end their shift at work.

With Ms. Marvel’s powers back, I should probably tell you a little bit about her if you’re unfamiliar.

Danvers premiered in 1968 as an Air Force fighter pilot and spy.  She became friends with the alien Kree superhero Captain Marvel and during one of their missions, she got caught in a Kree device explosion – fusing her DNA into half-human, half-Kree.  Luckily for her, that also came with a bunch of cool new superpowers.  Though her years in comics have been fairly tragic.  She’s had lovers murdered, watched her mentor die of cancer, experienced an alien sexual assault/kidnapping, the X-Man Rogue stole all of her powers and memories, fought alcoholism, had her career ruined, and that’s just the tip of it.  But as I’ve said before, what kind of superhero would she be if not for tragedy?  All those powers come with a steep price.

And the extent of her powers?  They’re a doozy.  She’s crazy strong – about equal to The Thing, and unlike him, she still gets to retain her good looks.  Ms. Marvel can fly, possesses super-speed, has near invincibility, is able to shoot energy blasts, and she can absorb all types of energy.  A beastly powerhouse.  In comparison, Spider-Man is one-tenth as strong, cannot fly, and his projectiles are all gooey. Though their personalities are both fantastic.

And since Parker gets to be the girl, Danvers has to impress him.  The best society way society has told us how: showing off. 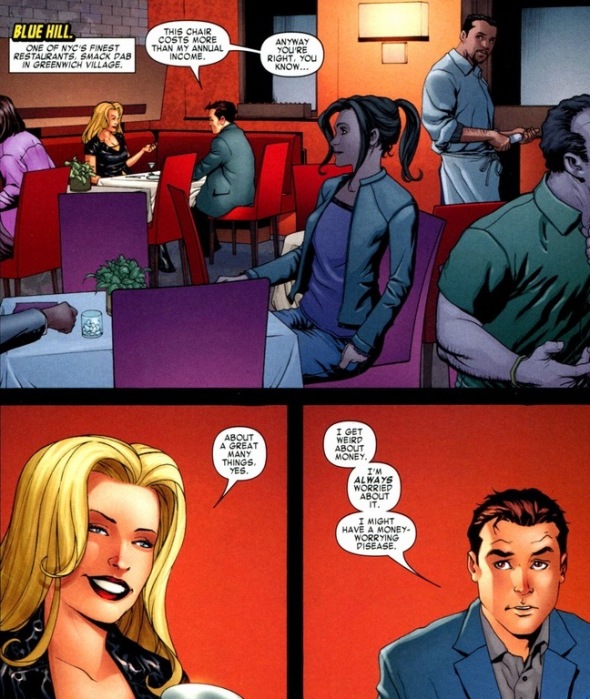 Did I forget to mention that Ms. Marvel’s rich?  She wrote a tell-all book about her time at NASA. Wasn’t a terribly complimentary book.

This story takes place during the Marvel event Dark Reign, where Norman Osborn (Green Goblin) became the head of national security and spent the better part of a year or so hunting down superheroes.  Thank goodness for secret identities.

You know Mystique, Magneto’s former buddy and troublemaker.  While the master of magnetism has reformed in the past decade or so, Mystique still causes a bunch of trouble.  She’s more in Wolverine’s rogue gallery nowadays anyway.

Keep in mind, this is an actual date.  Not a friends getting cotton candy together date, but a real date. The two banter together better than any other Avengers (maybe Hawkeye, but Ms. Marvel’s way prettier) and they get along magnificently.  But I don’t think I’d be wrong in saying that this is the first time the two of them have had any opportunity to talk to each other alone and not about strictly superhero stuff.  Let’s see how it goes.

Despite how bad the date’s going, we’re missing one vital part of every single superhero date in existence.  Did you say random attack by armed bad guys?  Because you’re right.

Write down that one-liner.  You’ll need it next time you’re ambushed at a restaurant.  Since they’re fugitives and their cover’s blown, the two have to cut their dinner short.  But now we finally get to see a real moment between Parker and Danvers.  One that’s genuinely sweet and not totally awkward. 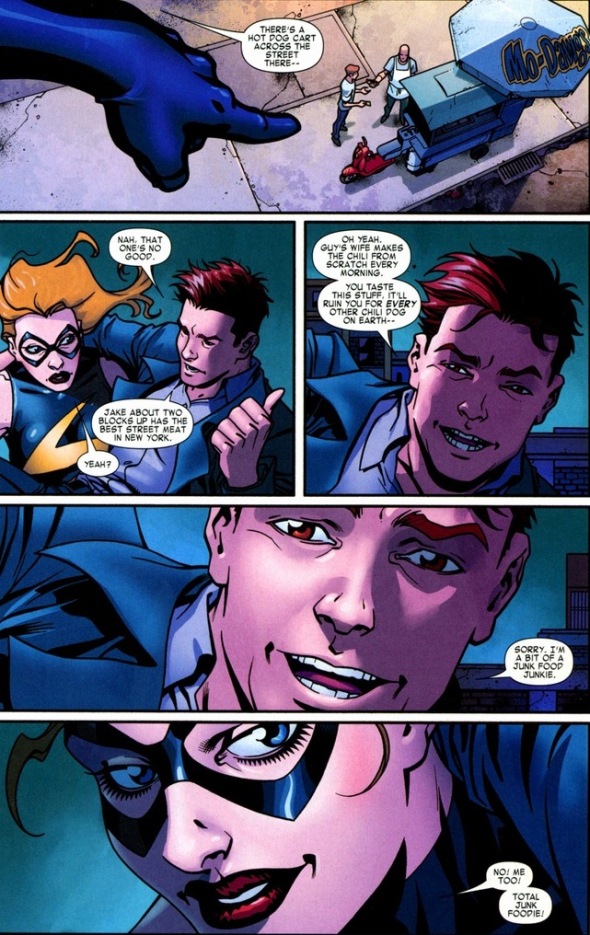 While this is more than enough for me to be satisfied with an article, I’d be a terrible person not to bring up the Siege: Spider-Man one-short that occurred six months later, also written by Brian Reed and drawn by Marco Santucci.  Siege was the finale of Dark Reign, where Norman Osborn and his group of bad guys attacked Thor’s home of Asgard (that floated next to a small town in Oklahoma). This issue was one of the many side issues that went along with the event. 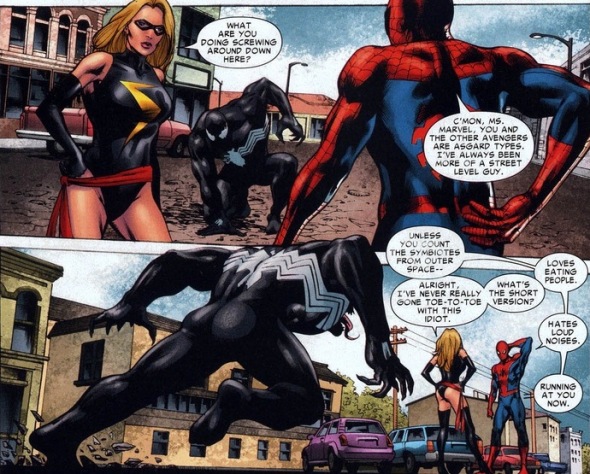 In the fight, Ms. Marvel gets sucked up by the Venom symbiote.  Happens a lot, actually.

But the most important reason for me showing you this issue is in the next few panels: 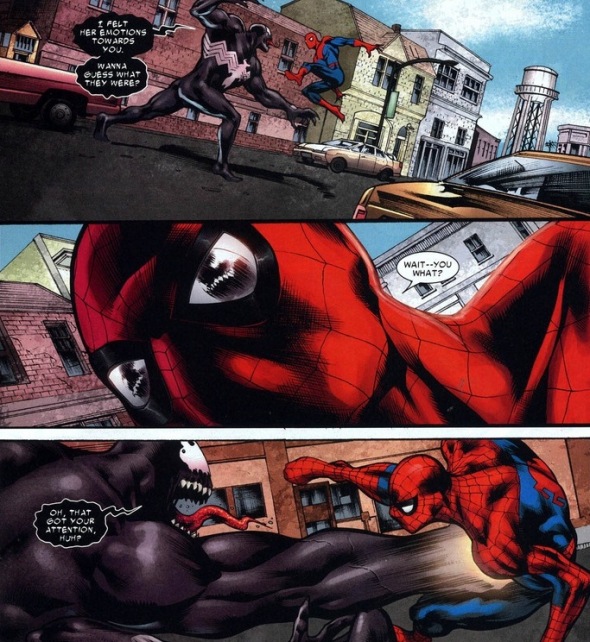 And Spider-Man’s little mention in the aftermath: 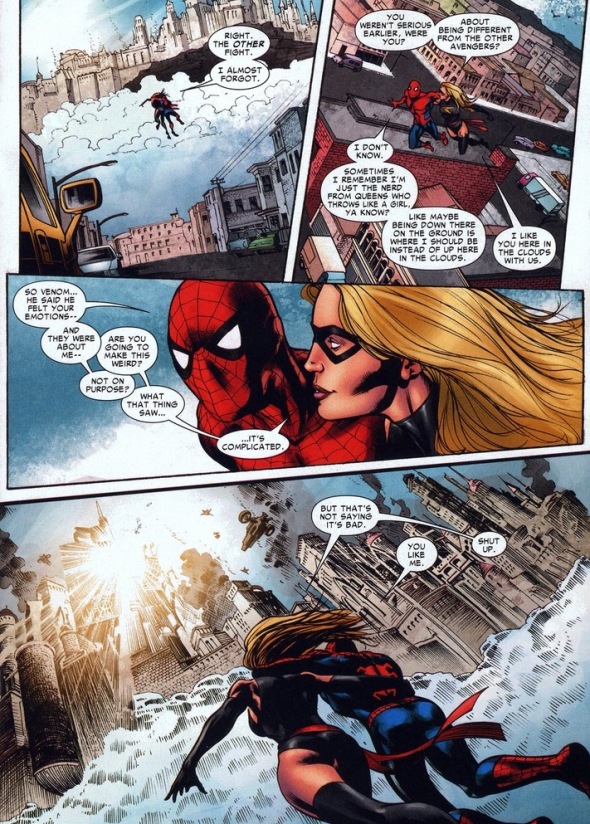 Truthfully, the chances of the two of them having a relationship are slim.  Spider-Man’s destined to get back together with Mary Jane, though that’ll probably take another five to ten years.  And Ms. Marvel just got a promotion to the new Captain Marvel, which should cost her most of her time.  But I promise you that if in the next few weeks or months Spider-Man and Captain Marvel make out, you’ll know.   And I’ll apologize.  A very small apology.