Unlike my previous article title with such a bold claim, this time I mean it.  And vice versa.  The two are fated to be together, because for all the self-loathing and frustration that comes along with Ben Grimm’s orange rock exterior, Alicia has forever been the permanent reminder that despite his ugly and bulky appearance, someone will always love him.  Though when we pick up in our story, they’ve broken up.  It happens, relationships are tricky.

Alicia Masters, a blind, gifted sculptress, has been a recurring character in the Fantastic Four comics since their 8th issue in 1962.  And she’s not just thrown in as a love interest for the Thing.  Nope, this civilian saved the entire world.  Y’see, Silver Surfer, the herald who travels to planets on behalf of Galactus (devourer of worlds), crashed into her apartment after a fight with the Fantastic Four.  There, Alicia convinced him of all the joy and goodness thriving on Earth and Silver Surfer switched alliances, fought Galactus, and saved the world from being eaten.  I’m serious: 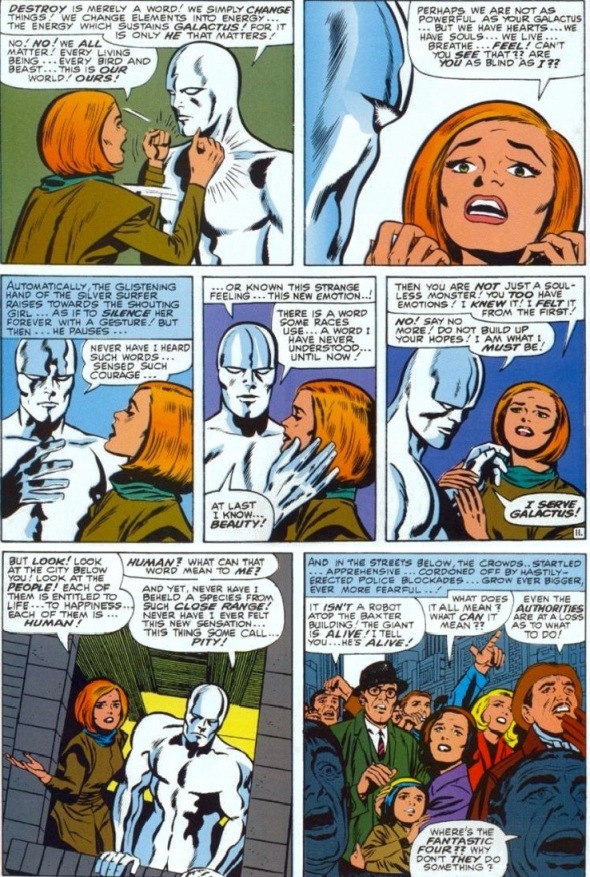 Anyway, Reed Richards (Mr. Fantastic and smartest man in the world) has been patenting, selling, and inventing for over a decade.  For every comically large bag of money thrown at him for creating the next world-changing device, he has to spend a fortune repairing the Baxter Building from attacks, covering every business expense, and making up for any revenue losses due to stuff like exploding Fantasticars and dimensional portals sucking in lab equipment.

Because Johnny Storm (Human Torch) and Sue Richards (Invisible Woman) are his brother-in-law and wife respectively, he has legal rights to plunder their bank accounts in case of emergencies.  And since they’re superheroes, emergencies are every other issue.  But he can’t touch Ben’s money, because “best friend” isn’t legally binding.  So when the Thing inquired recently as to exactly how much was in his personal bank account, he learned the exciting truth: he’s a billionaire.

Today, we’re going to take a look at Ben and Alicia during Thing #1-8, volume 2, written by Dan Slott and drawn by Andrea DiVito and  Kieron Dwyer.  Unfortunately, the series only lasted eight issues, but if you get a chance, it’s a delightful read.

Despite the break up, Ben and Alicia have moved on.  Alicia’s dating a sensitive, brilliant artist dude: 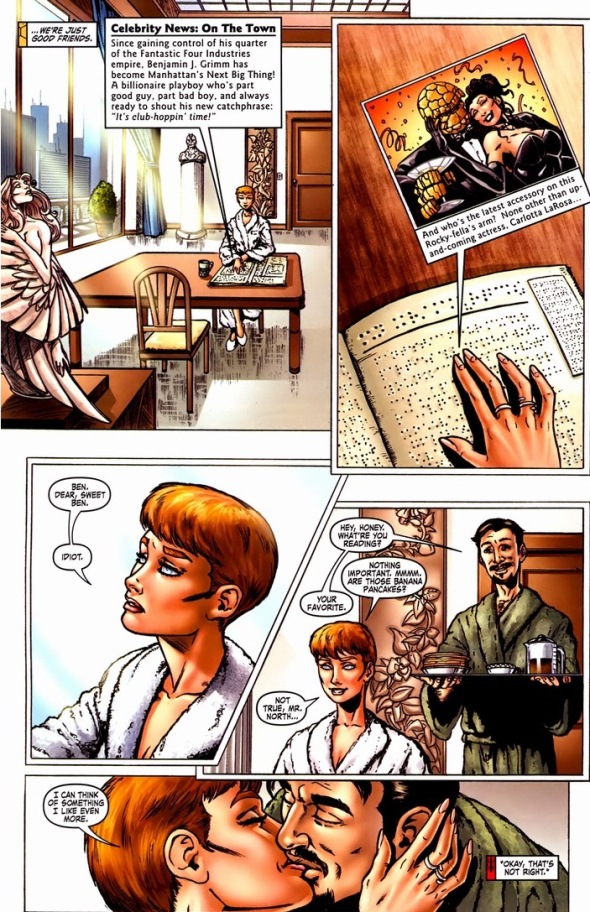 And the Thing’s dating a beautiful movie starlet: 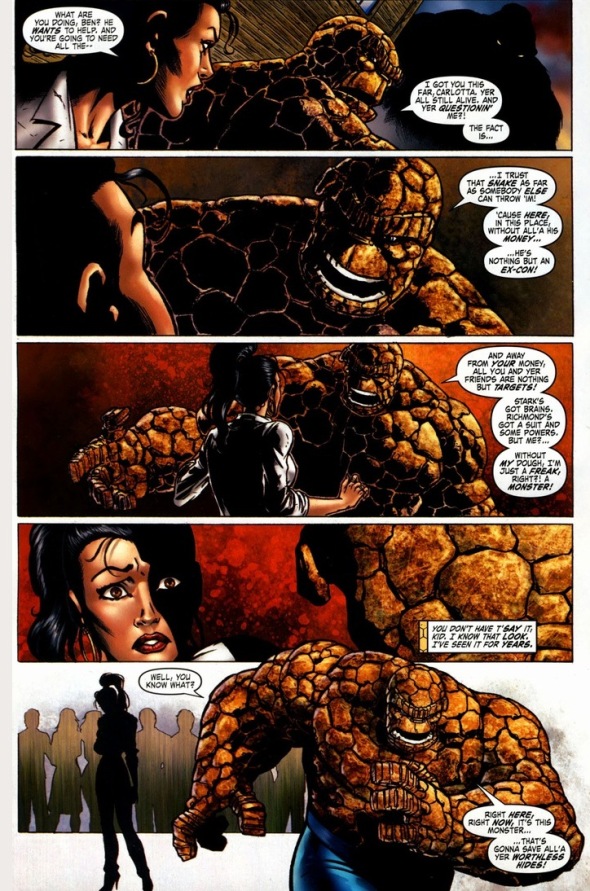 Or was dating a beautiful movie starlet.  Heaps of money comes with many rewards, like financial stability, unbelievable luxuries, happiness, peace of mind, envy of those around you, a personal chauffeur, and a few dozen more I’m missing, but let Tony Stark tell you, it doesn’t buy love.

Oh, probably forgot to mention the two of them were kidnapped with the other guests at a party and brought to the supervillain Arcade’s murderous amusement park island.  My bad.  But they’re freed now, because of Alicia (and Daredevil).

To take Ben’s mind off his lady problems, he decides to put his money to good use, building a recreation center in his old neighborhood off Yancy Street.  It’s a tough place, where thugs with hearts of gold who just desire a better life angrily stroll the street with spraypaint and tiny melee weapons. But to build this place, he’s going to need a professional, and with his wealth, he can afford the best in town. Well, when he’s done reminiscing. 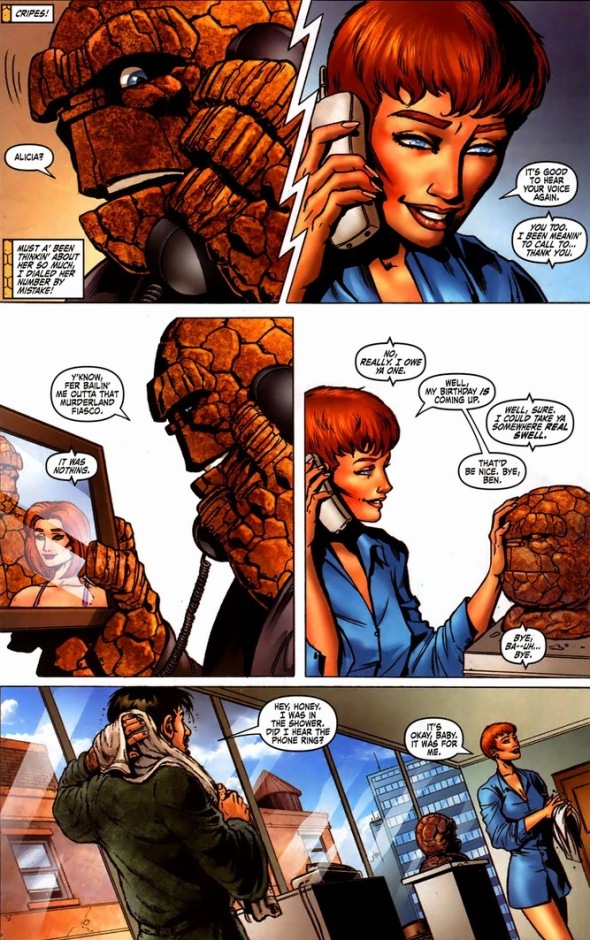 What did we learn in those above pages?  Yes, the Thing misses Alicia, but more importantly, he has no idea Arlo and Alicia are dating.  Not one little clue.  Intelligence is mainly Mr. Fantastic’s role on the team.

And just because Arlo sounds like he came out of the musical Rent, he’s not going to lead on Alicia’s ex-boyfriend/giant rock monster. 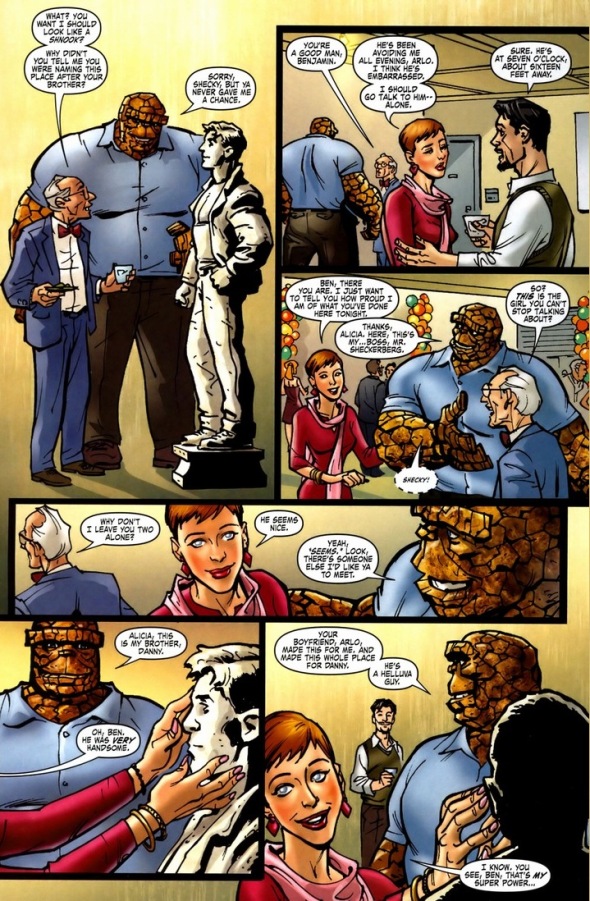 While Ben can’t let go of his feelings for Alicia, at least he’s happy that she’s happy, which is far more than I can say for most of the relationships I’ve seen unfold on Facebook.  But he’s also not going to give up.  As you read in an earlier page, her birthday’s coming up, and he promised he’d take her out. If Alicia’s going to dump Arlo, this would be the last chance.  Ben’s gotta go big.  Oh, and he now has a giant teleporting dog.  It lives on the moon.

So where do you take her that’ll wow her into changing her relationship status?  How about traveling to the past by dusting off that ol’ time machine Reed Richards keeps in a spare room?  If Arlo thinks a mini Venus de Milo can win her over, what chance does he have against the real thing? 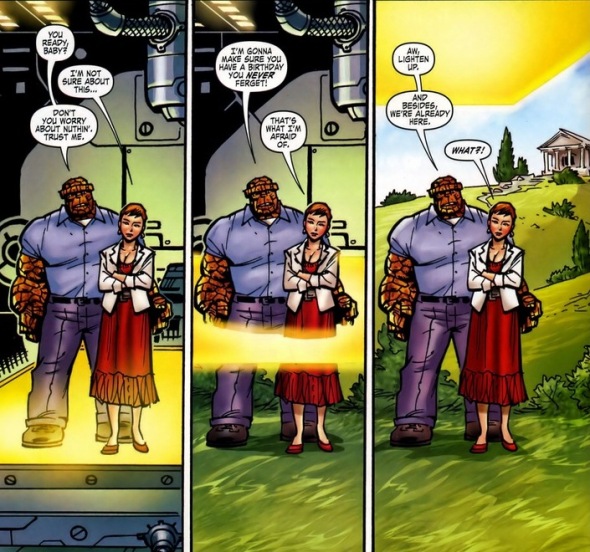 Hercules!  They’re drinking buddies 2,000 years in the future.  But unfortunately, not now.  To be fair to Herc, he sees a lovely young lady arguing with a seven-foot tall monster and he decides to step in. Also for a more perverted reason I’m not sharing with you.

They brawl for a while.  Heavy hitters are fun to watch fight, because readers don’t have to worry about stuff like grace or acrobatics.   I love crazy, complicated battles, but sometimes there’s nothing better than a simple exchange punches from dudes who can lift medium-sized airplanes

Oh, and that statue Hercules knocked the Thing into?  Yeah, you don’t need a detective for that.  Despite their rocky history (sorry), it’s not hard to believe why Alicia loved Ben in the first place:

Do they get back together?  Of course they do, and not with some sort of poetry or chasing her down at the airport, but because Ben uses his brain.  Sneakily.  Romantically sneakily.

Told you, they’re fated to be together.  I’d show you the rest of the issue and the series’ ending, but I actually already covered it in a previous article.  Still, nice to see a happy ending once in a while, isn’t it?  Always a pleasure to see the rock monster find real love.  That and billions of dollars.

I hope this satiated your emotional comic needs, because heads up, the rest of this week is a sucker punch to your tear ducts.  Oh, and Aquaman.  Lots of Aquaman.