Superman and the Supermen war, Pt. 1

The most powerful hero in the DC universe!  So strong!  So handsome!  So righteous!  And he just made a huge mistake.

One day, Braniac (the super intelligent alien) attacks Earth and Superman saves the day.  As he always does.  But among Braniac’s trophies was the shrunken Kryptonian city of Kandor, neatly placed in a bottle.  Well, not anymore.  Now back to full size, Kandor and its population got their own nice little planet on the other side of the solar system.  Good and bad news.  Superman now has a hundred thousand of his own people, thought forever lost in Krypton’s explosion.  But because they now also live among a yellow sun, they all get Superman’s powers.

For those not in the know, to explain how Kryptonians are normal people on Krypton yet have crazy powers on Earth, writers decided that it was the sun’s yellow solar rays the triggered all those abilities.  Y’see, Krypton has a red sun, which keeps them at civilian strength.

Well, just because there are a hundred thousand Supermen running around, Earth should be safe as long as some power-hungry vengeful supervillain doesn’t take control of New Krypton and start a war with our lovely blue planet. Oh, except that’s exactly what happened in War of the Supermen #1-4, written by Sterling Gates and James Robinson and drawn by Jamal Igle.

Meet General Zod.  Back when Krypton was not exploded, Zod served as military leader until he committed treason (by siding with Jor-El believing Krypton’s imminent destruction) and he was shipped off to the Phantom Zone.  It’s a weird dimensional place, like a prison, but where people sentenced there lose their physical attributes.  Like ghosts.  It’s complicated.  Anyway, because Zod was in the Phantom Zone, he survived the destruction of his home planet and now spends his life escaping his prison and trying to kill Jor-El’s son, Superman.  Strangely, Superman’s rogue gallery isn’t fairly well-known, but he’s definitely one of the bigger names that battle the Man of Steel.

So why are the New Kryptonians looking to destroy Earth?  Mainly General Lane (Lois Lane’s father) and Lex Luthor’s fault.  They’ve been trying to kill all the Supermen.  After a few successes (and killing a fifth of the population), time for Zod and the entire military to retaliate.  Oh, and duh, supervillainy:

A war between Earth and New Krypton is inevitable.  The casualties will be enormous, so being the superhero he is, Superman decides to prevent this from happening in the first place.  Gotta save both his original and adopted home.  Which means our armies are as follows:
Earth: 6,000,000,000
New Krypton: 80,000
Superman: 1

Before the war begins though, we should check back in on New Krypton itself.  There, Supergirl and her mother are interrogating one of Luthor’s supervillain henchmen they captured. 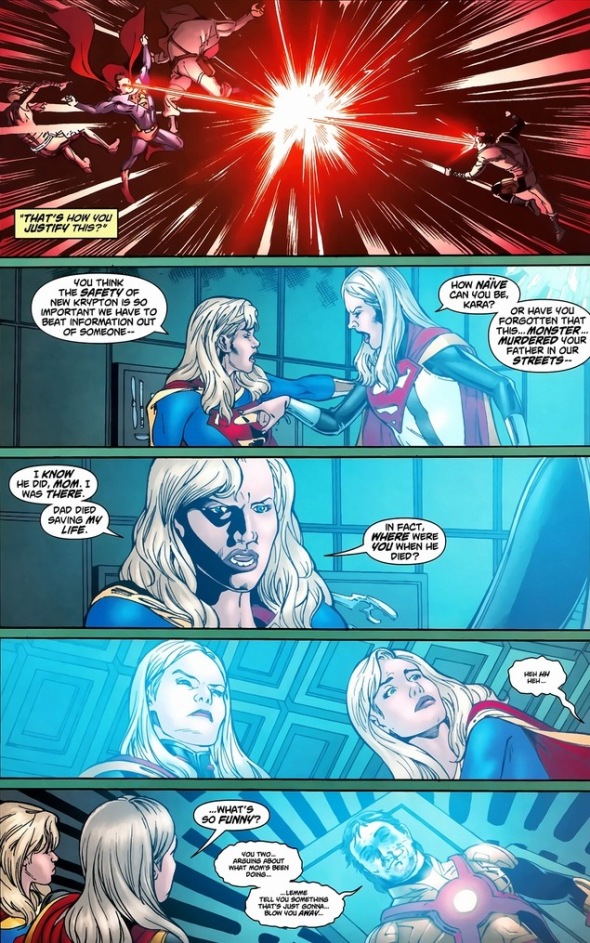 You can argue all you want that the Joker is a far more interesting and dangerous DC villain than Lex Luthor, but the Joker never did this: 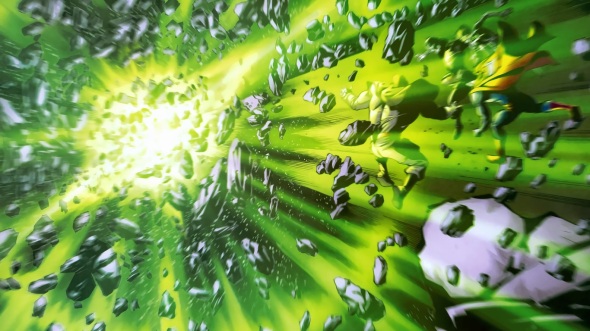 After this, doesn’t look like negotiations are going to solve the war.  Nope, Superman just got himself involved in a massive bloody rumble with zero hope of slowing down the momentum.  At least he does the responsible thing and goes to look for survivors.  I’m sorry, I meant survivor. 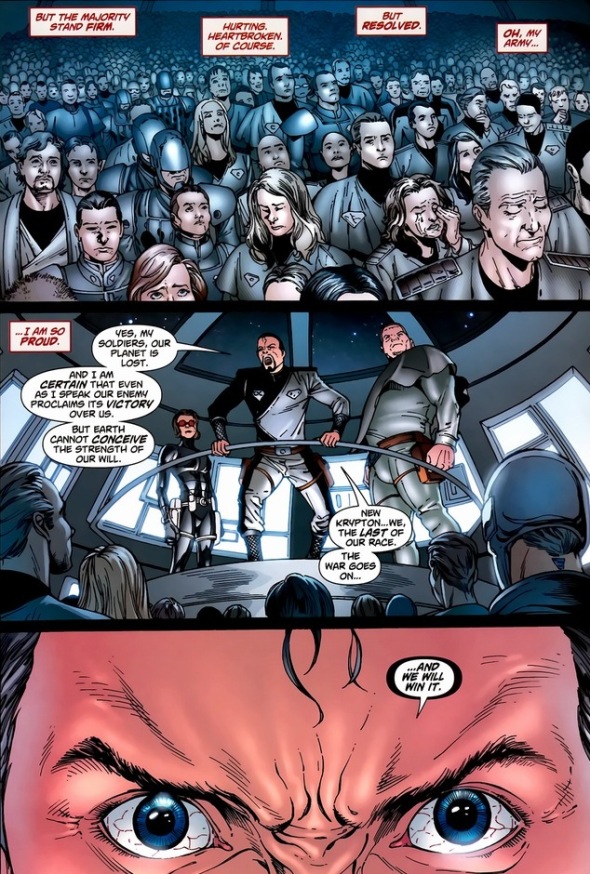 Tasked with a near impossible task, Superman at least isn’t alone.  Nope, because when you’ve been around for 74 years, you’re bound to pick up some superfriends.  Not the Super Friends.  These guys: 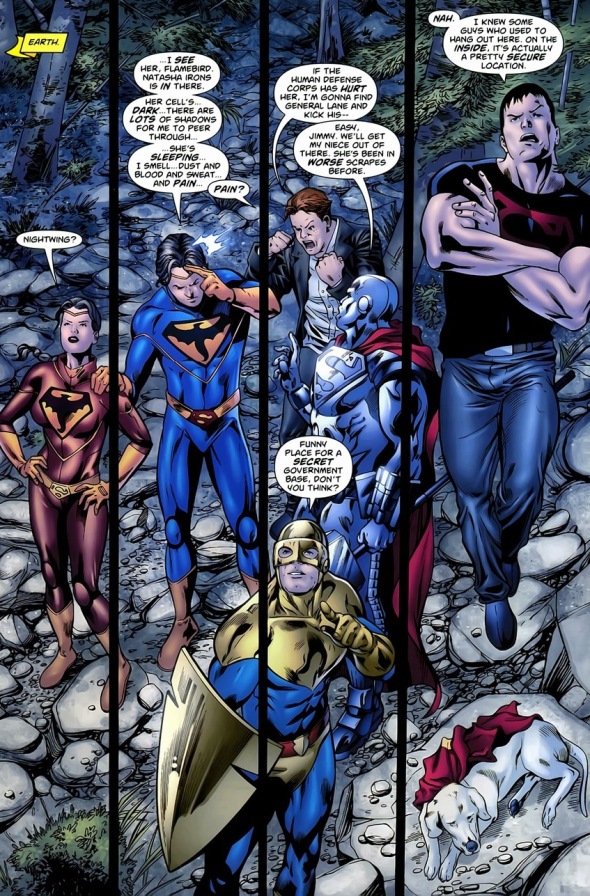 With the addition of, from left to right, Flamebird, Nightwing, Guardian, Jimmy Olsen, Steel, Krypto, and Superboy to our team of Superman and Supergirl, our armies are now as follows:
Earth: 6,000,000,000
New Krypton: 20,000
Superman: 9

Still not good odds.  Though 20,000 angry Supermen remains more than enough to take down Earth. And trust me, no holding back anymore: 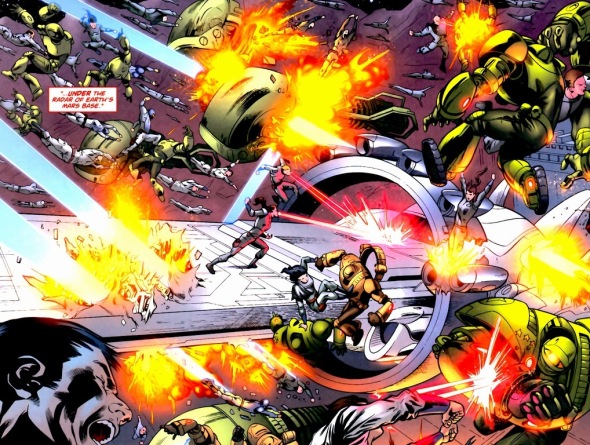 Now, Earth’s not stupid.  Trust me, as strong as the New Kryptonians are (very), Earth has a few trump cards up its sleeve.  Including one that’s downright cruel, horrific, and genocidal.  Y’know, the one Lex Luthor thought of. 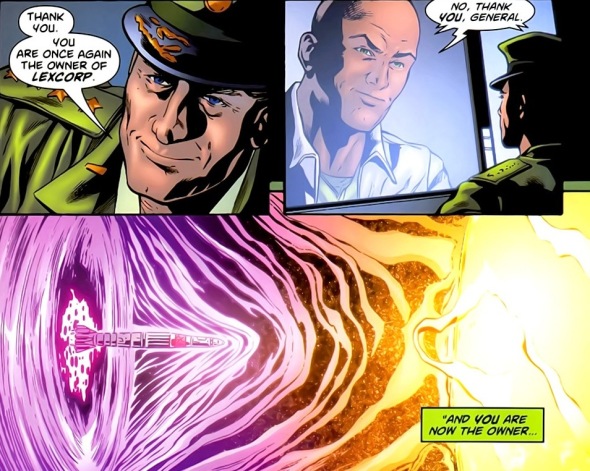 What a jerk!  But also, what a brilliant military move.  Are Superman and Supergirl doomed?  I still have 20ish images left, so we’re going to save the rest for tomorrow.  But don’t worry, because there’s plenty of punching to come.

One Comment on “Superman and the Supermen war, Pt. 1”