Hey everyone. Jason has kindly allowed me to make to make a guest post while he does other things related to his grown up life. Don’t worry, he’ll be back on Monday with new material so don’t fret just yet. So today, we are going to talk about one of my favorite comic series, Transmetropolitan. I tend to go with more words than pictures, so I hope you can be more patient with the bombardment of words.

This is Spider Jerusalem…

A former journalist that is forced through circumstances beyond his control to return to the place he hated. A mountain man in every sense of the word, you wouldn’t be able to notice his past life, the life that he decided to leave behind.   When he comes back to the City, immediately gets his old job back when asked for it, and goes to get ready at his new apartment, complete with a drug addled 3-D printer. 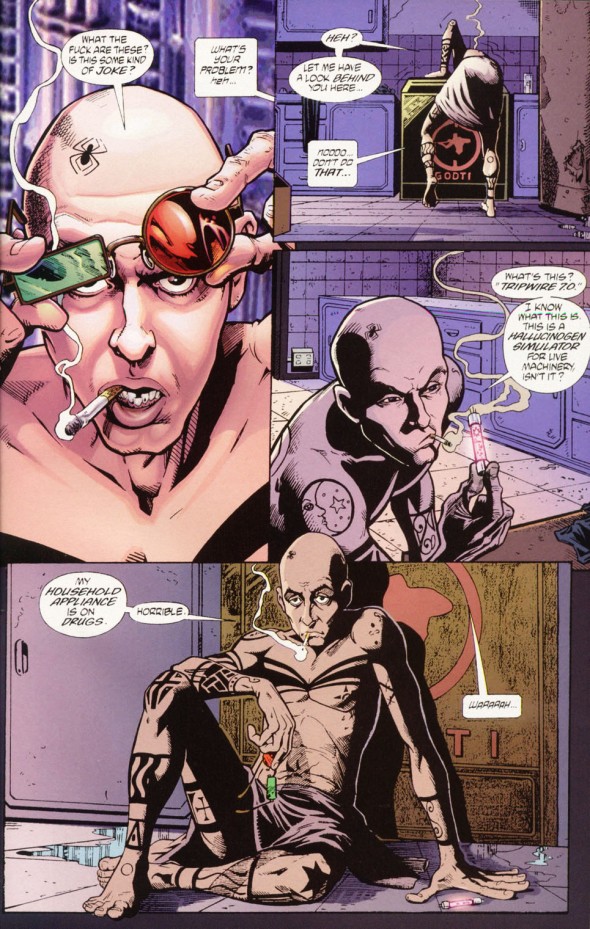 Of course, this does not fully highlight the level of insanity that he displays, this occurs much later at a religious convention. 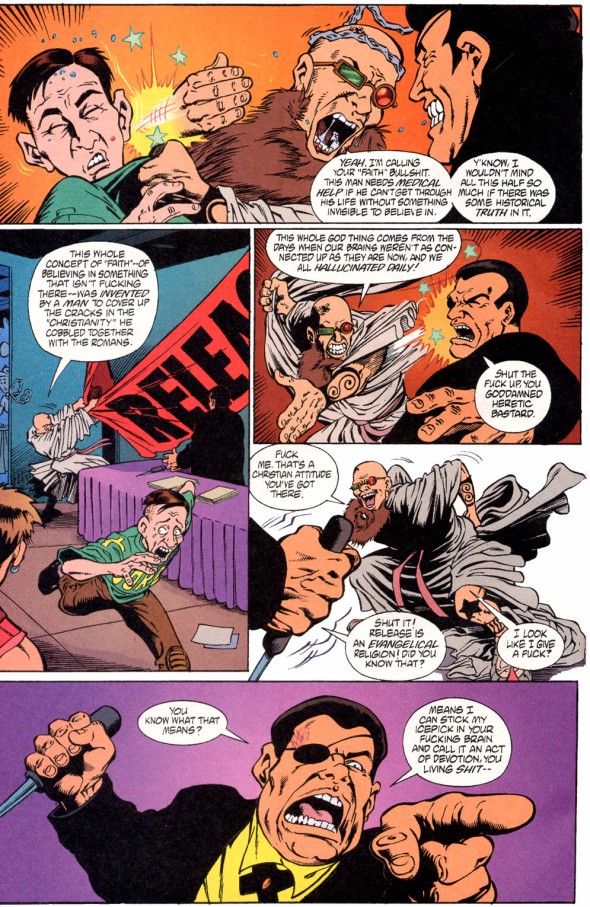 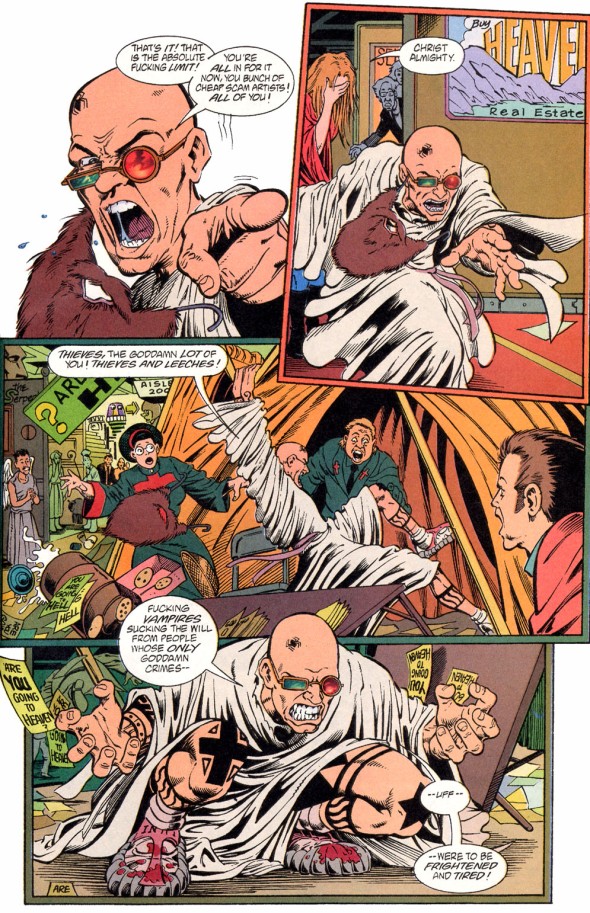 Yes, that’s Spider dressed as Jesus throwing a fit at a convention because he sees faith as nothing more than bullshit. Yes, it would be a terrible thing to see in real life. But a part of us, depending on our views, would love to see someone do that at a similar situation.

Now why would you want to be anything like him? He’s  a sociopath, seemingly drug addled,  and a menace to society at large. And yet, that is exactly the reason why one would be inclined to read the comic in the first place. Because we can live vicariously through his exploits and survive. We are going to talk about the dark and sinister feelings that one has towards the place they live in. And of course, these are the feelings that we are deathly afraid to show to other people, because it is a very good way to get arrested or ostracized. Because while we may feel compelled to do these very bad things, we know better than to do it.

The City itself is pretty ridiculous. But in its own way, it is very similar to the world we live in now. Sure, our robots don’t develop a drug habit and you don’t have trans-species surgeries to deal with, but even in its gross exaggeration, there are things that we can connect and relate to. And even if you leave a continuous 9-5 existence, you are, at the very least, exposed to the place you live in and it shapes you in some way or another. And in some ways, we hate it too. We hate authority, we hate other people for various reasons, and we hate the consistent and predictable lifestyle that we live in. So for the most part, we get pissed because John from Accounting is being a prick or because the boss told us we have to work overtime. Don’t you want to visit horrible and painful things for those people? If you do, you need help, but for everyone else that doesn’t have consistent fantasies of introducing your boss to a chainsaw, there are ways to be able to live out your own fantasies, and for a period of time, don’t think about your own life and how terrible it is. These fantasies help when taken into moderation. We can take another point of view and see what the person sees. Experience what they experience. We can be as clean and orderly as Superman or as dirty but honest as Spider Jerusalem. And that’s the beauty of it. We don’t have to get down and dirty with nasty things like Lex Luthor plan to send an artificial  tsunami to hit Metropolis and the implications that it brings. We can save the day.

There is this underlying theme of man struggling with the city as. Spider is hardly someone that meshes well with the city life. It is the attention that was placed on him, his integration that was occurring between him and the very City itself that made him opt to leave in the first place. And we can relate to that in some form or fashion. Granted, unless you are really unlucky, you won’t really have to deal with mass police brutality. Some of us get upset with authority just by getting a ticket or having to show up for jury duty. But our interactions with authority or with day to day life is frustrating and difficult to deal with. And depending on what happens to you or what shows up on the news, you can also feel a sense of outrage as well depending on the news item. There is a sense of  helplessness that comes with living in close proximity of so many people. And we can relate to it, because we’ve been there. We know what it is like to be completely drained by our jobs and our families and our friends. And to see someone fight against the very City itself, well to some comes a desire to do much of the same in our own way. And to see the protagonist win against all odds, since no one likes a sad ending.

And the comic even draws from the life of Hunter S. Thompson, a notable and celebrated journalist of his time, which goes to show that even our larger than life protagonist has real world connections. If you need any proof of this connection, there is an obituary that Hunter S. Thompson wrote on Nixon that should help connect the dots (1). Granted, he didn’t run around utilizing his own brand of vigilante journalism, but he hardly led a safe and easy life. And most of us, when given the opportunity to do what he did, wouldn’t do it because we are more than content to leave safe and boring lives. But that doesn’t mean that the excitement of such a life is unappealing either. We just want to experience it in the comfort of our basements.

In essence, this is the power of any media, but in particular, comics. They can show us far different worlds, help make the connections between the reader and characters, and allow us to consider other perspective, realize any feelings that we have. Media of any time and place help broaden and sharpen our perspectives. You may be at total odds with Spider Jerusalem’s way of doing things or his philosophy, but that also serves in setting a point where your values can run opposite of. And if you are cheering on Spider as he pisses off every single person of power, at least you can do it without being beaten and thrown to jail. Because, let’s face it, the vast majority of things that Spider does could lead you to a rather lengthy prison sentence.  Like for example, shooting a bowel disruptor at the sitting President.

And honestly, the fact that we can enjoy this sort of scene without being shot and killed in the process goes to show that comics are a safe medium to explore topics that otherwise would ensure a spot and a mention on the nightly news.

All images come from Transmetropolitan , written by Warren Ellis and drawn by Darick Robertson.