A magical ride with the Avengers

You ever heard of the Hood?  He’s been a big supervillain pain in the butt to our dear Avengers these past few years.  Rising from obscurity, he got control over some cool wizard stuff and became the new Kingpin of New York.  Like commanding hundreds of supervillains in a fun, little supervillain army. Then he joined with the losing side during the Battle of Asgard and got locked up in jail powerless and helpless.  Until he escaped, of course.

We join mid-adventure with Avengers #7-12, written by Brian Michael Bendis and drawn by John Romita Jr.

Now that you’ve met our shaggy antagonist, are you up to date on the Infinity Gems?  So important they’re capitalized.  Y’see, back in the day, the Elders of the Universe (space gods, I think?) created/gathered/found them one lovely Galactus-filled afternoon.  These Gems, each one of six godly powers, can do whatever the wearer wants them to do as long as they say the right magic words or press them against their soul or something.  Look, the Infinity Gems are a little before my time.

Anyway, another space god Thanos once gathered up all six and then instantly wished half of the universe’s population to disappear.  So if you’re wondering, one of the most powerful objects in the known universe in the hands of a magical street thug is certainly not good news.

Wondering why Mr. Fantastic has one of the gems?  How about why one of the gems were hanging out in an icicle palace to begin with?  I realize the magnitude of back story required.  I’ll go fast.

One day, the six most scheming, forward-thinking men in the Marvel universe (Iron Man, Professor X, Namor, Dr. Strange, Mr. Fantastic, and Black Bolt) realized that having a secret little club where they could subtly influence or make important world-changing decisions wouldn’t necessarily be a bad thing.  Like each members of their Illuminati taking one of the Infinity Gems and hiding them so no one could ever steal and abuse them.  Such as what they failed to do right now.

But for all his sneaking around, how does the Hood (real name Parker Robbins) alert the Avengers to his mischief?  Hint: it doesn’t involve a cookie bouquet. 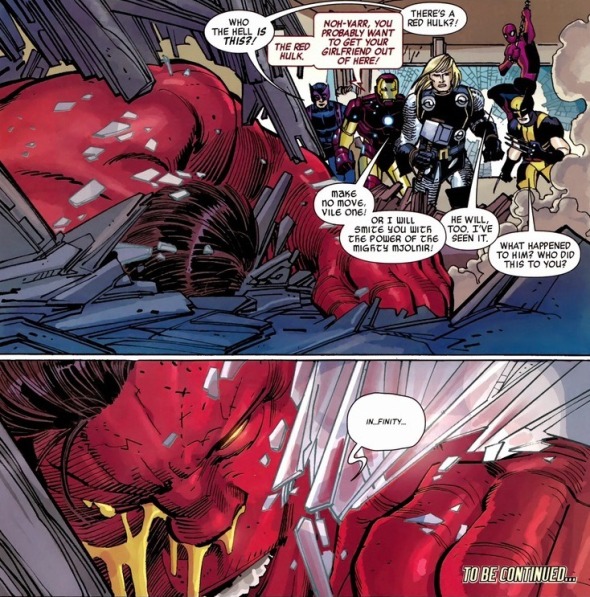 Can’t get less subtle than uppercutting a Hulk.  Unfortunately for the brain trust, their Illuminati tree house just got exposed.  You know who doesn’t like secrets?  People not told them, duh. 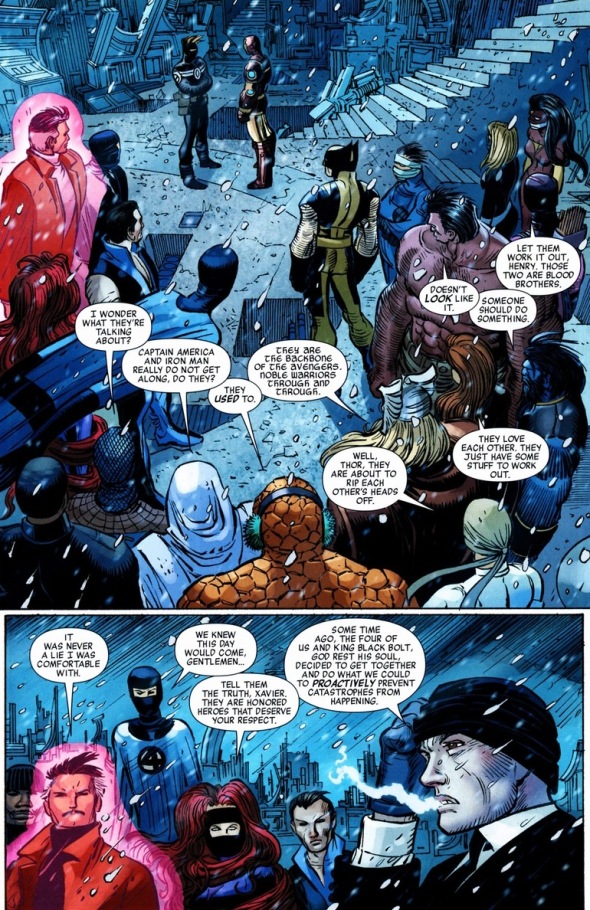 Since they’re all super cool heroes and stuff, the two or three dozen Avengers present form a plan:

Split up, gather the remaining Infinity Gems, put Robbins out of his misery.  Game over.  The best part of this upcoming montage?  I can totally show a bunch of scenes with zero context.

Sadly, because of some special connection the Gems have with each other, this happens: 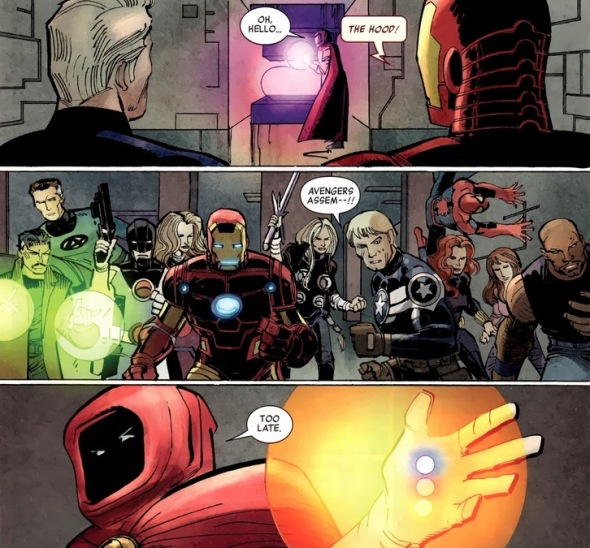 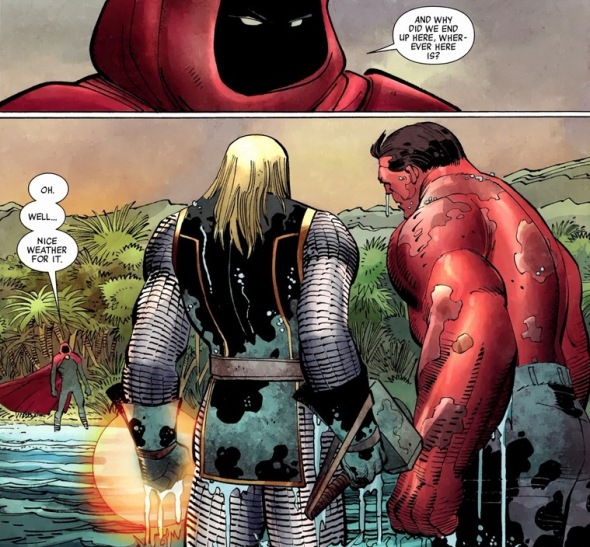 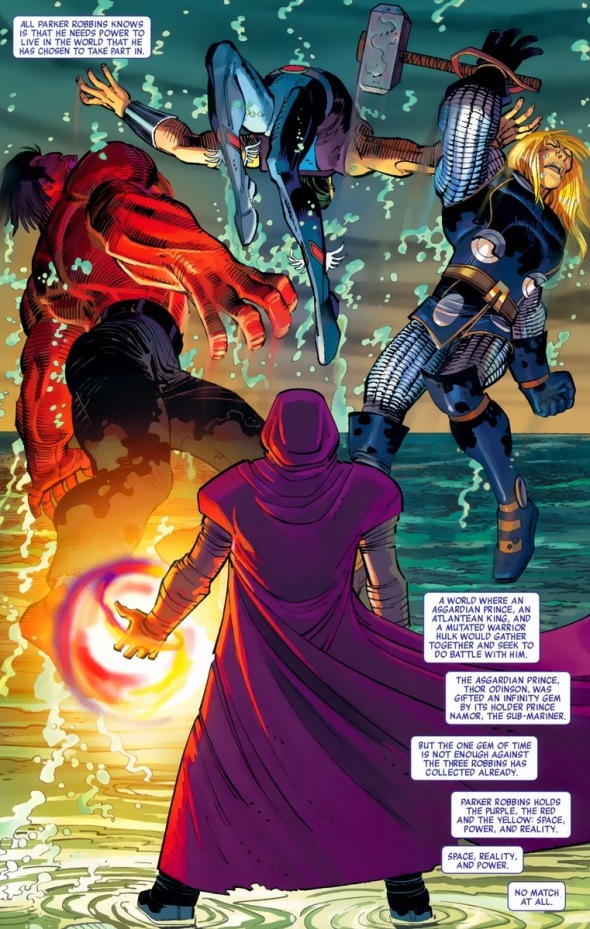 You read all that blue text?  Yes, with the power the Hood currently possesses, not a single superhero that has ever walked the planet stands a chance against him.  But he’s also a street thug given magical powers as a goof, so his creativity and talisman knowledge borders on the low side. The Hood allows Red Hulk a rare opportunity:

The fight ends there, but that Gem remains fairly important.  Plus, now the Avengers equal Robbins in gems.  Roll call!

The Hood can’t possibly win against the battalion of superheroes when it comes to magical equal footing.  Well, I mean theoretically, he could flip the odds. 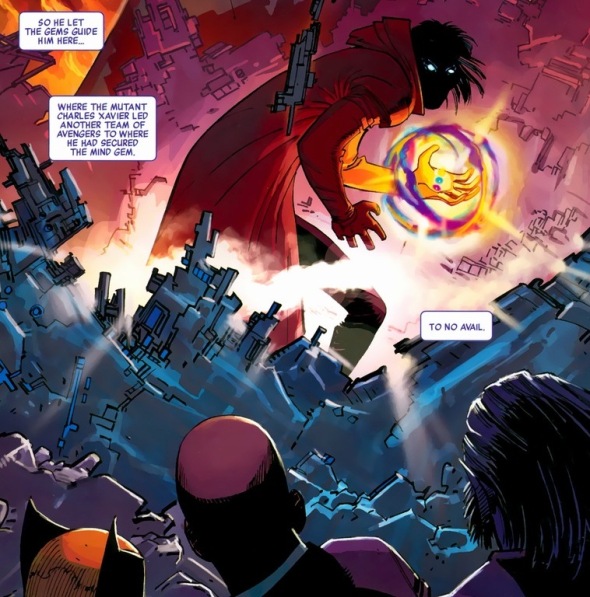 But like all good superhero stories, our climax takes place in the wizard dimension that the human brain can’t comprehend blah blah blah.  Oh, and how do you take down the most powerful supervillain currently in the world?  Did you guess punching? 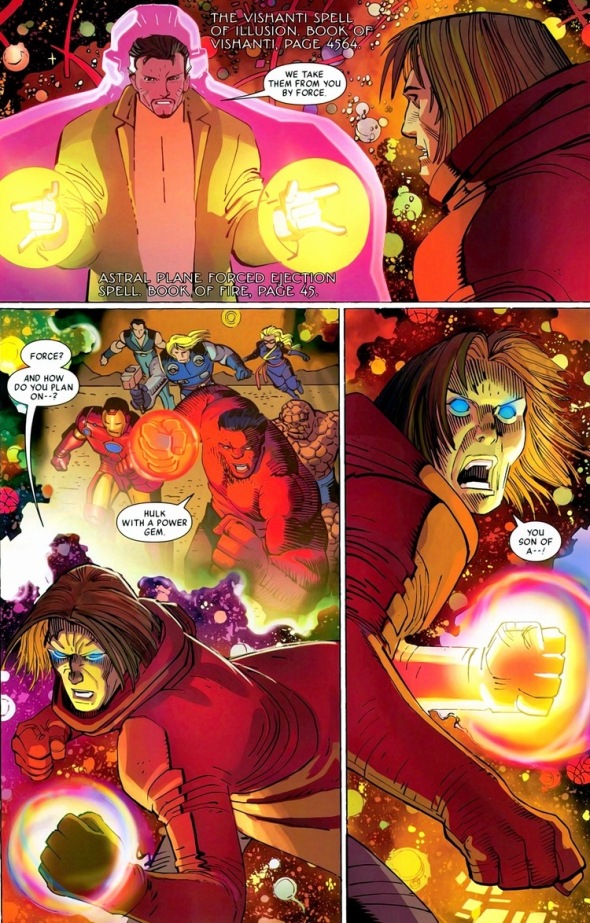 From this point, the fight goes badly for our antagonist, as most fights do against 30+ Avengers.

And Iron Man with complete control over every facet and dominion of everything ever?

That single tear rolling down your cheek because of no more secret meetings with secret superheroes?  Fear not, reader.  The Illuminati lives on.  Even the smartest, sneakiest of super-powered dudes need a poker night.

2 Comments on “A magical ride with the Avengers”