← Punisher: attack of the Jigsaws, Pt. 1
Punisher vs. Rampage →

Blood, wizards, and the Punisher

After the mess of Secret Invasion, the Punisher goes back to business as usual.  Even got himself a new tech guy, and this one’s all young and idealistic and not a former supervillain.  Less than a year later, everything goes badly.  Really badly.

We’re reading Punisher #5-10, written by Rick Remender and drawn by Tan Eng Huat.  The Marvel event Dark Reign just started as Norman Osborn takes control of the government’s defense and superheroes.  When the Punisher attempts to assassinate Osborn, the former Green Goblin gets rightfully angry and sends his buddy and current New York Kingpin the Hood after Castle. That same Hood from Tuesday’s post.

Luckily the Hood has a plan.  An evil, demonic plan.

You can click the above image for a much larger version of it.  So the Hood can resurrect the dead, though to be fair it’s demonic blood magic that requires a human sacrifice.  To kill the Punisher, sixteen supervillains should be enough, right?  Wouldn’t hurt to throw one more backup plan on the pile.  Meet Microchip:

The original tech dude.  From 1987 until 1995, Microchip served as the Punisher’s confidant, supplier, and dare I say, friend.  Except after a falling out, a bad guy blew up Microchip with a rocket launcher. Thank goodness the Hood can revive.

Before the craziness begins, Castle and his new tech guy Henry have a warm and fuzzy moment. 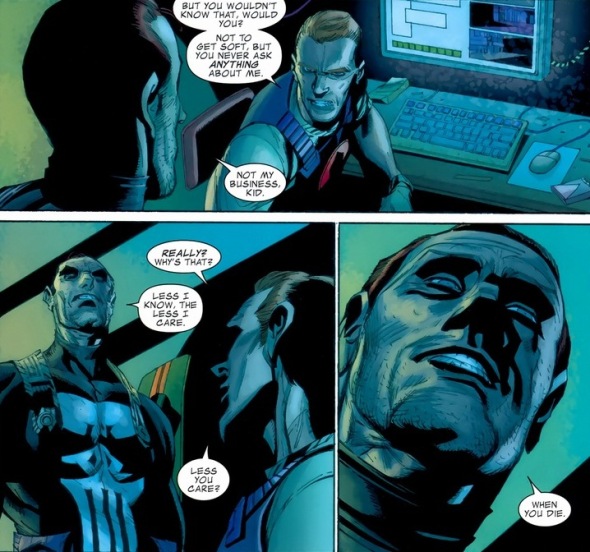 I know what you’re thinking.  How do these supervillains find the Punisher?  Well, you know who has always been really good at finding the Punisher?  And you know who might have just been recently married, found elusive happiness, and is finally satisfied with his place and lasting effect on the world?

While I’m not really going to cover his side story until all the paths merge in the climax, just know he’s about to have a really bad day (like seriously depressing).  In the main story, what follows are four or five issues of silliness, explosions, and the Punisher taking down his newly alive predators.  Have some highlights: 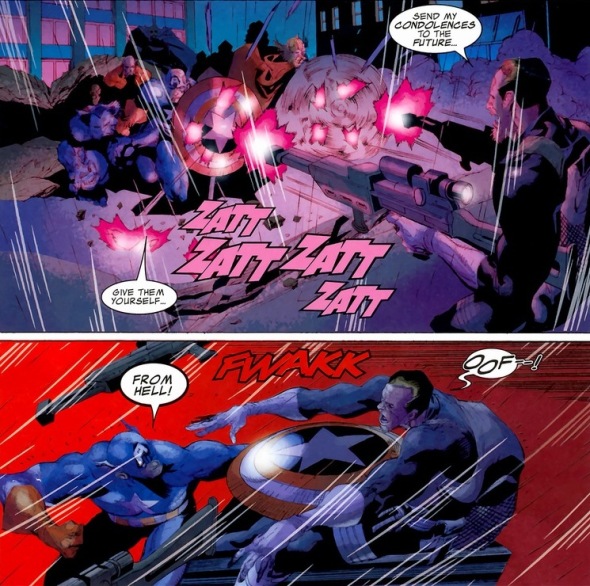 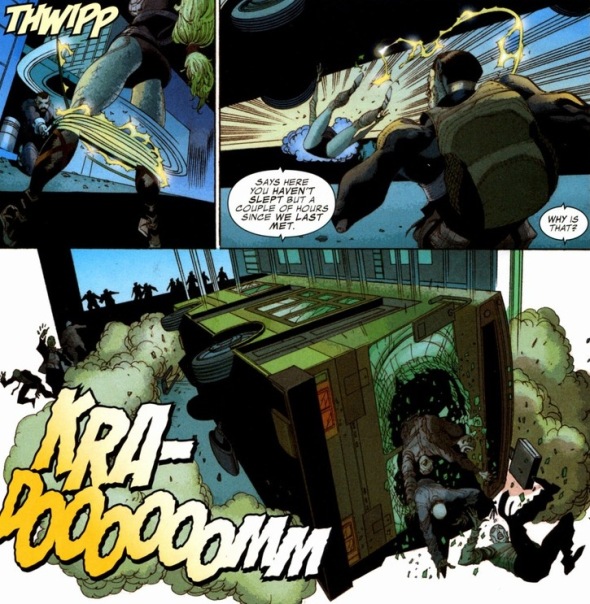 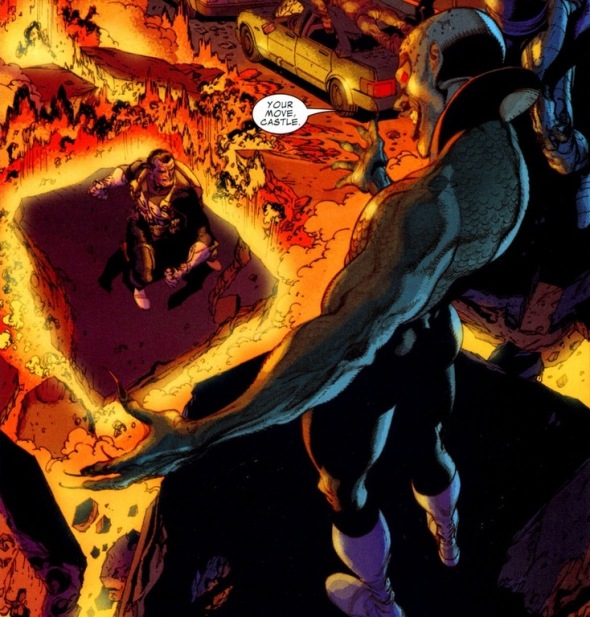 Finally, as the supervillain numbers dwindle and the Punisher gets closer to locating the Hood, Microchip makes his move.  Y’see, Castle can take punches to the gut all day, so Microchip decides to play smart and take out his eyes and ears.

Oh, and since I really like Bridge as a character, let’s quickly check up on him: 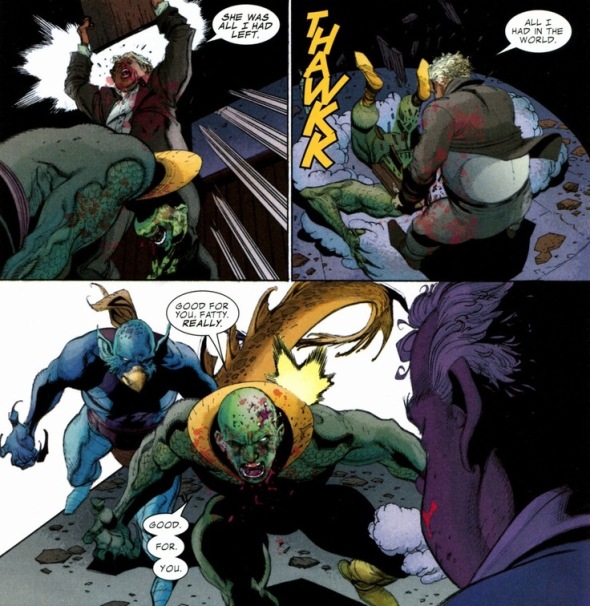 I know I’m skipping enormous amounts of stuff.  To catch up, the Punisher gets captured, Bridge gets captured, and Henry is presumed dead after that living computer virus monster.  All leading to the end of the story and the Hood’s mandatory supervillain rant, easily one of the coolest extended metaphors in supervillain rant history: 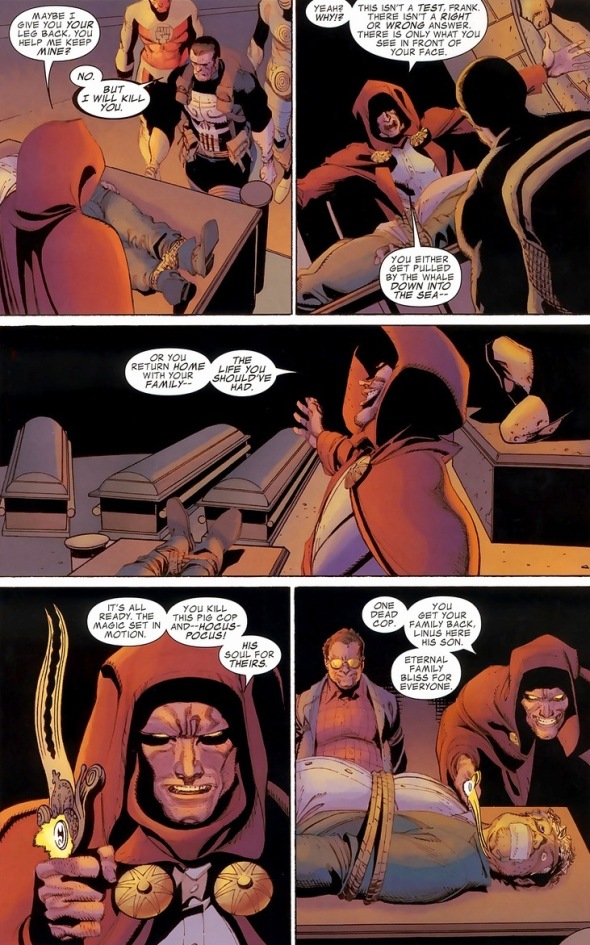 Who says bad guys aren’t well read?  To sum up, since the Hood has that cool ability to revive the dead through a blood sacrifice, he offers resurrect Castle’s family if Castle kills Bridge. Why?  Well, a Punisher reunited with his greatest loss means a happy Punisher and far less dead mobsters and supervillains.  Plus, Microchip’s deceased son comes back in a package deal.  Win win win.

But y’see, two obstacles stand in the way of eternal bliss.  First, the Punisher doesn’t kill innocent people, especially honest cops who are just doing their job protecting their country.  And second, depending on the writer, the Punisher has been capping baddies for anywhere from ten to thirty years. He knows nothing else.  He has nothing else.  Once he came back from war, that warrior’s blood never once subsided.  But a second chance at family?  A redo?

Nope.  One could argue many reasons for his refusal.  Most likely theory remains that Bridge’s an innocent man and blood magic can’t be healthy when it comes to corpse revival.  But then Microchip steps in and Castle’s impulsive response requires some serious thought.

Remender doesn’t really explain in detail why the Punisher has the guy re-kill his family.  My guess? His wife and his children awaking to their murderer husband and father, who now possesses a body count of thousands?  Demonic magic coursing through their veins?  The Hood offering no guarantee of the resurrected’s mental state or physical condition?  None of that sits well with our hero.  Or maybe his family simply perished in the park that fateful day many years ago and that’s that.

I’m in the camp that believes the moment he became the Punisher, as he held his dying children in his arms, Castle knew then and there that he would never, ever be content or fulfilled again.  That Frank Castle died along with his family.  In three words, the Punisher explains everything I’ve just said far better than I ever could:

I read a ton of comics, and I’ve never seen so much said in so little: his entire characterization summed up in eight letters.  The punch helps too, I guess.

The ending of this arc’s amazing, but you’re going to have to buy the book for the full story.  I’ve only covered the details I needed to.  We move onto part four on Monday, where everything you’ve read in the past three days collides into one fantastic finale with all the characters, vengeance, and explosions you expect.  Though one final note to go out on.  Henry?  He’s been harboring a secret.