Huntress and Scarecrow go to church

Why not another Huntress post?  She doesn’t even exist anymore in current DC continuity, the poor girl.  Originally, Helena Wayne, the alternative Earth daughter of Batman and Catwoman, took the name Huntress.  And when the DC universe rebooted, Helena Wayne popped up again, erasing Helena Bertinelli like next morning’s bad Indian food.  Oh well.  We still get to celebrate Bertinelli’s previous adventures at least.

Some back story, really fast.  In the late 90s, a massive earthquake struck Gotham City, ruining the city so badly that it was declared inhospitable and everyone who didn’t evacuate would be sealed off and left to fend for themselves.  The event was called No Man’s Land, and I guess it was DC’s way to have a canonical apocalyptic wasteland for Batman and buddies to run around in.  If you haven’t read it, you really should.  No Man’s Land, even to this day, is absolutely fantastic, complex, and well-done.  Also, it’s like 80 different issues tying in every Batman family title for over a year.

Let sad Batman explain better than I can:

Today, we’re going to take a look at the Fear of Faith arc, which took place in Batman: Legends of the Dark Knight #116, Batman: Shadow of the Bat #83, Batman #564, and Detective Comics #731, all four issues written by Devin K. Grayson and drawn by Dale Eaglesham.

With food and water running short and psychopathic supervillains parading around town, most of the remaining citizens spend their time scavaging food or hiding in makeshift shelters.  Gangs and Bat family members spray-paint their symbols on the wall, signalling troublemakers that they control or protect the area. 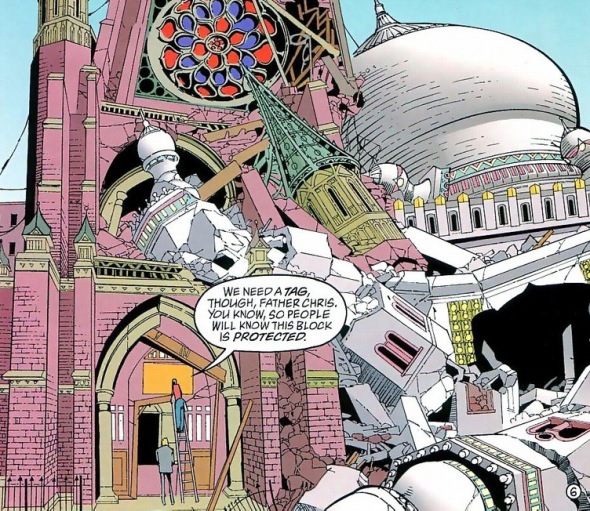 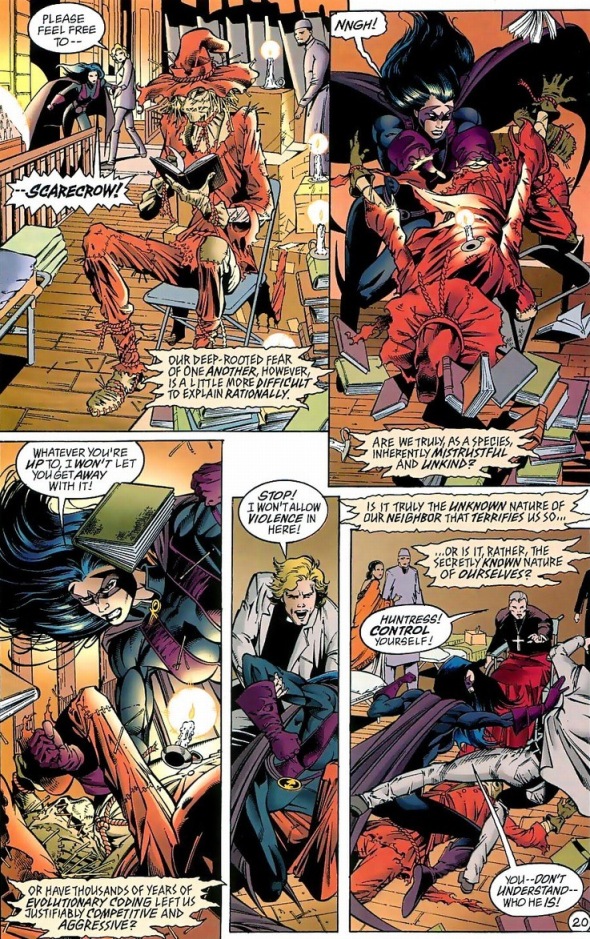 Oh yeah, and one of those citizens is Dr. Jonathan Crane, the Scarecrow.  You know him.  That crazy psychologist who specializes in fear gas while robbing banks and getting roundhouse’d by Batman. Regardless of his past, his intentions remain completely harmless.  Well, currently anyway. 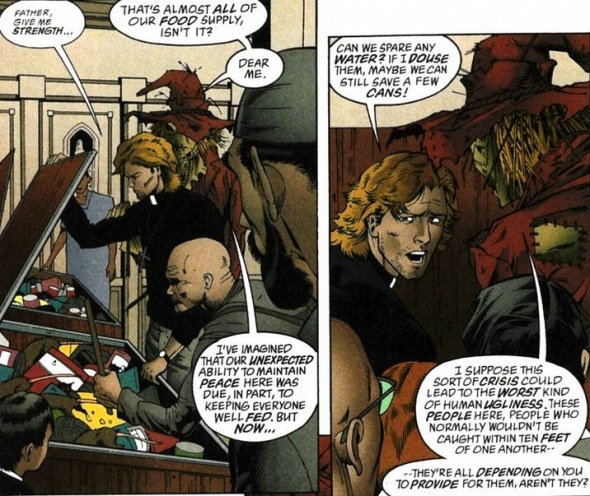 When rats eat all the church supplies, Scarecrow pulls a few strings to get some new food.  Turns out he knows a guy.  Unfortunately, it’s the Penguin.

A deal with the devil!  How delightfully ironic!  Speaking of which, what’s Batman up to? 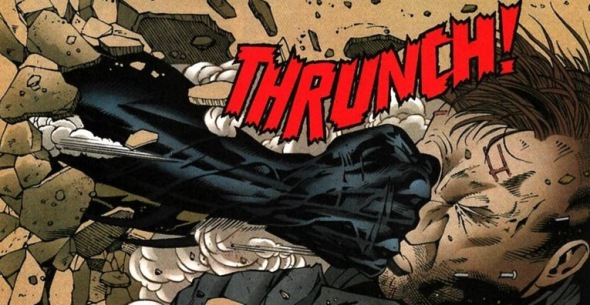 Oh, normal stuff.  Batman being preoccupied leaves Scarecrow to manipulate churchgoers and Huntress to threaten henchmen to their heart’s content. 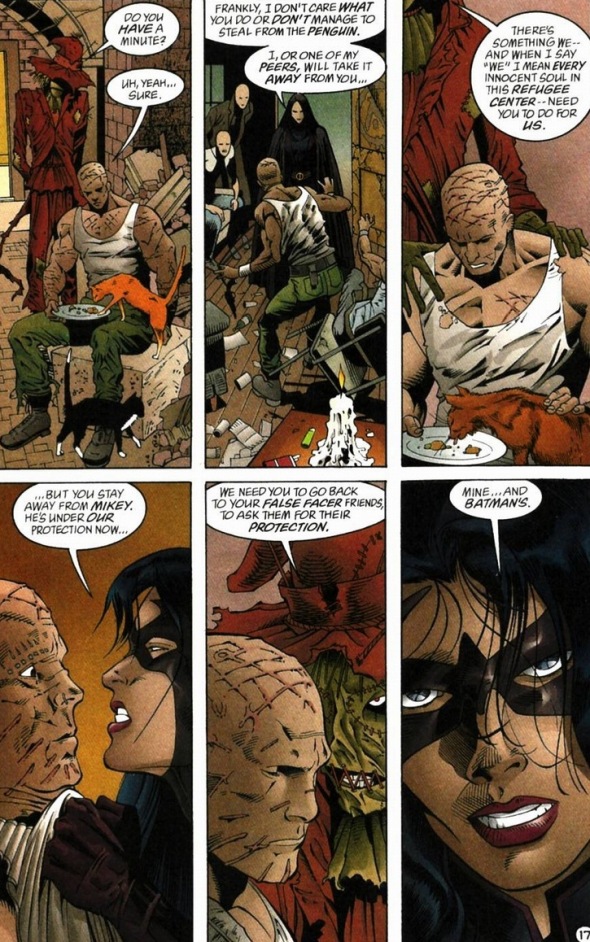 Okay, Black Mask’s former gang, the Black Maskers (I’m serious), left to form their own little group. Mikey left the new gang after a change of morality to which Scarecrow begs him to go back to ask for their protection from even eviler thugs.  It goes about as you expect.

With the deck rigged, time for Scarecrow to play his cards. 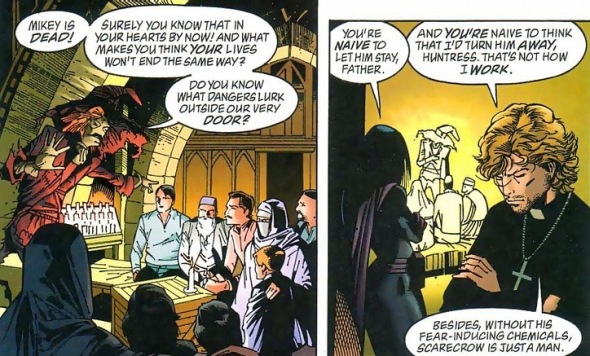 Just because Crane possesses no superpowers doesn’t mean he’s not a superjerk.  If you ever wonder why Batman keeps bringing his rogue gallery back to Arkham Asylum time and time again, it’s because most of them are actually insane.  Like Scarecrow.  And that letter he delivers to Huntress?  Stirring up trouble, of course.

Why the weapons reveal?  Because Scarecrow’s chips are all in while he bets a blind on a full house. I’m not really good at poker analogies.  Think about this for a moment.  Why did Scarecrow send Mikey to ask the Black Maskers for help?  Certainly because Mikey would get hurt, but more importantly, now the Black Maskers know about the massive, secret weapon stash.

How much death and suffering can one man cause with just rhetoric?  Crane intends to find out. 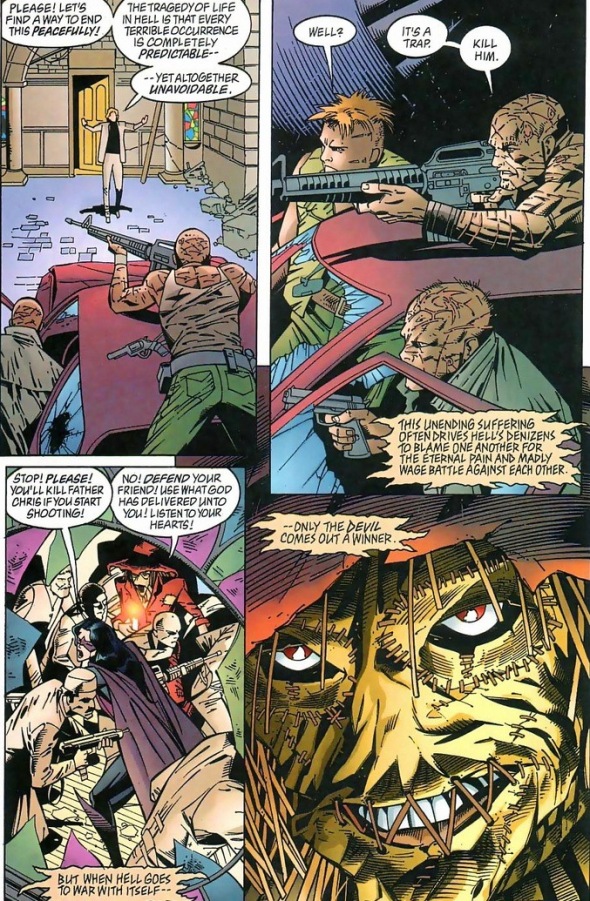 But the stakes aren’t high enough.  After all, Scarecrow’s a supervillain.  That title takes a reputation years in the making.  How about a few more dangerous factors thrown into the mix? 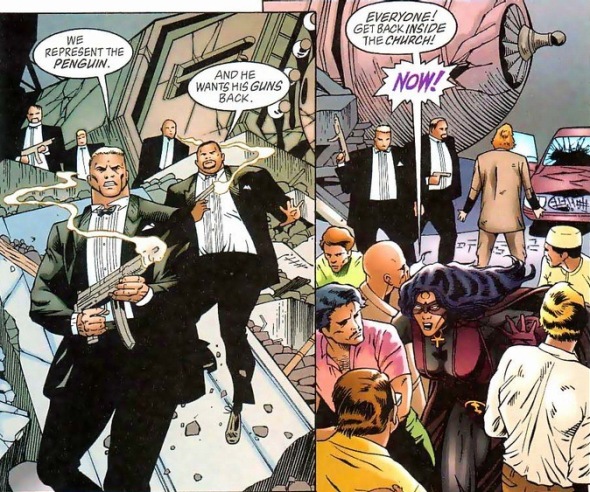 C’mon, Scarecrow.  You can do better than that. 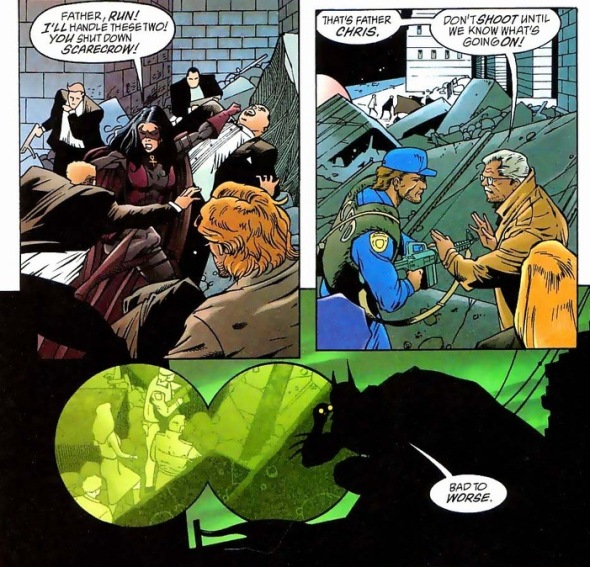 Oh, much better.  Now we get a pentagram of problems.  The churchgoers, Black Maskers, Penguin’s crew, the Gotham City police, and Batman all striking a match on this powder keg with Huntress alone trying to keep down the upcoming slaughter.  Not enough crossbow arrows in the world for that, sweetheart.

Unfortunately, Huntress can only sit back and watch the situation cave in on itself.  Well, until Gotham’s savior enters the fray to kick his way to peace. 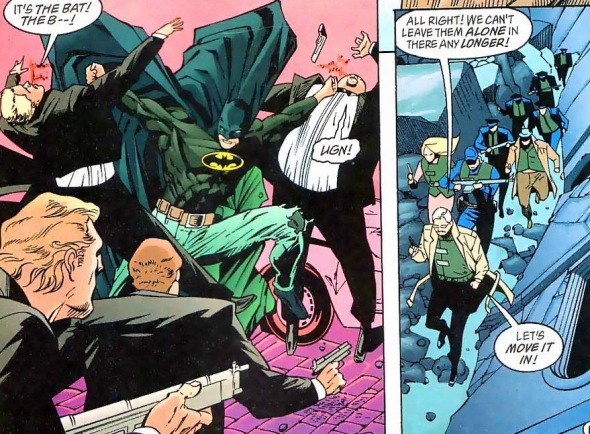 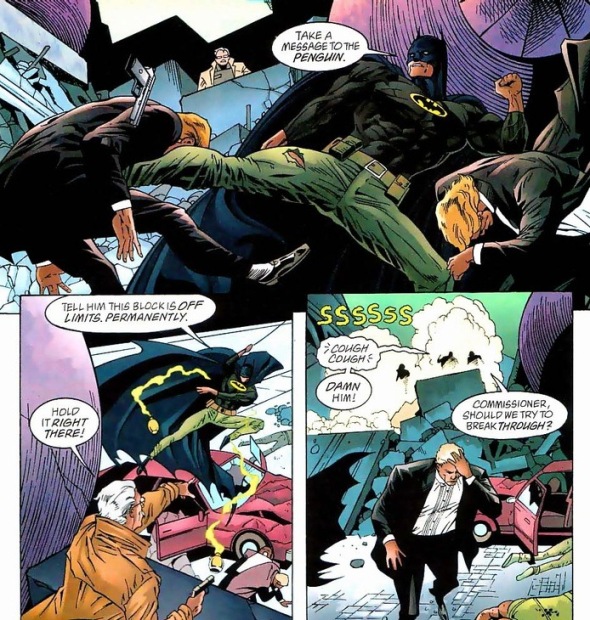 With the chaos outside under control, Huntress can solve the one major problem still left.

If you ever ask me why I enjoy this arc so much, the ending delights me every time I read it.  So many stories end with a punch in the face or a giant explosion.  Not this one.  Huntress, for all her violent and impulsive methods, defeats the Scarecrow using only love.  And it’s beautiful. 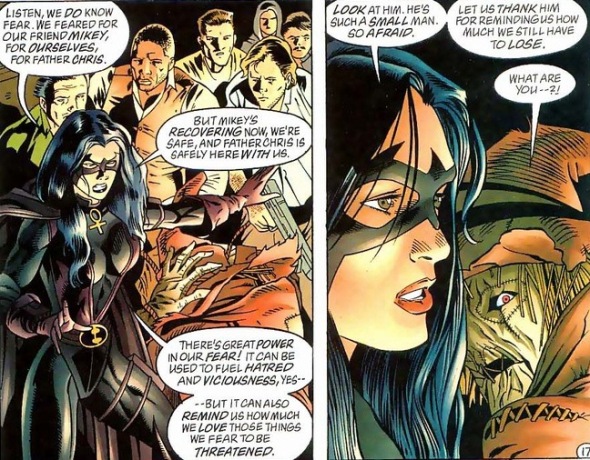 Despite the potential of the new DC universe, I’m going to miss Bertinelli.