← On Sandman, or how to properly retell a story
Midweek Superman slugfest →

The Fantastic Four get proactive

Fantastic Four comics have a preconceived notion.  Some non-fans get a little intimidated about jumping into reading about the superfamily, believing most of their comics go like this:

And to be fair, that isn’t totally off.  Long scientific explanations happens a lot.  But more importantly, the Fantastic Four is mainly about family dynamics mixed in with superhero teamwork.  You’re missing out by not reading their series, especially in the past decade or so.  Let me show you what I mean as we check out the miniseries Fantastic Four: Foes #1-6, written by Robert Kirkman and drawn by Cliff Rathburn. 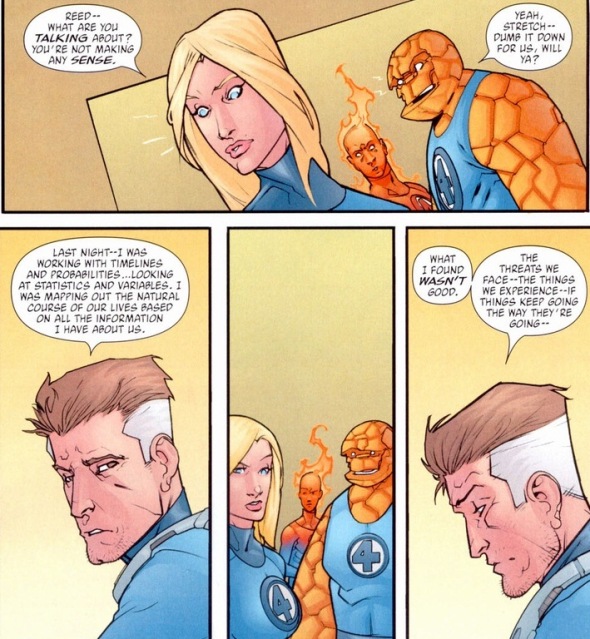 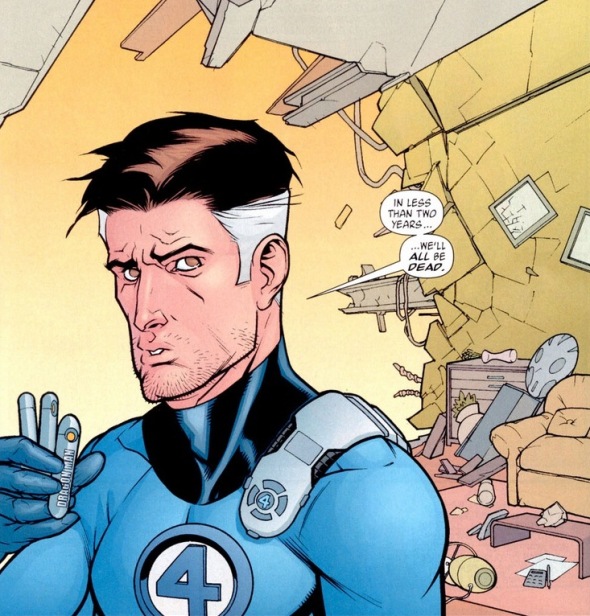 Unfortunately, Reed’s the smartest man on the planet, so his hypotheses are usually pretty sound.

So how do you beat good science?  Better science, duh.

That’s actually a smart idea.  Ethics aside, the Fantastic Four’s rogue gallery can easily all be classified as fugitives with some legal wrangling.  They do escape from prison like every three issues. So if the superfamily gathers up all their bad guys into some zoo for evil, the Fantastic Four’ll no longer be in any danger of being killed.  Simple enough, especially by attacking the villains at their secret dungeons or lairs instead of having each one bursting through their living room wall once a week.  Being the smartest man in the world, Mr. Fantastic realizes he has to create a prison that can’t be escaped from.  Well, the dude has a few ideas:

The Negative Zone!  It’s a secret dimension filled with all sorts of monsters and baddies.  Perfect place to construct a prison.  Though first, we interrupt our main story line for a quick ambush.

Y’know, the Super Skrull has a clear advantage.  He caught them by surprise and he’s way stronger than they are.  Except for one little problem: 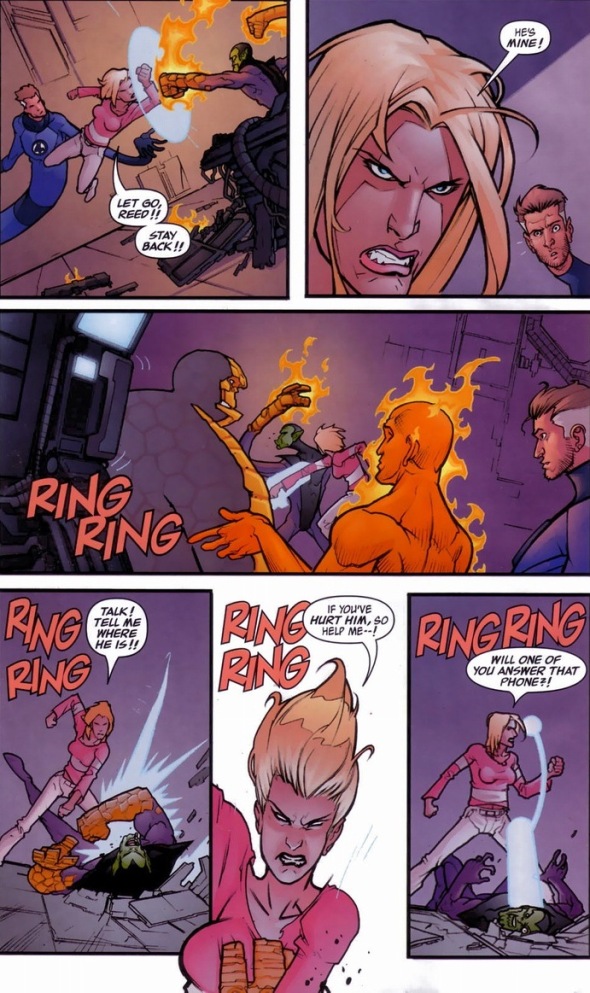 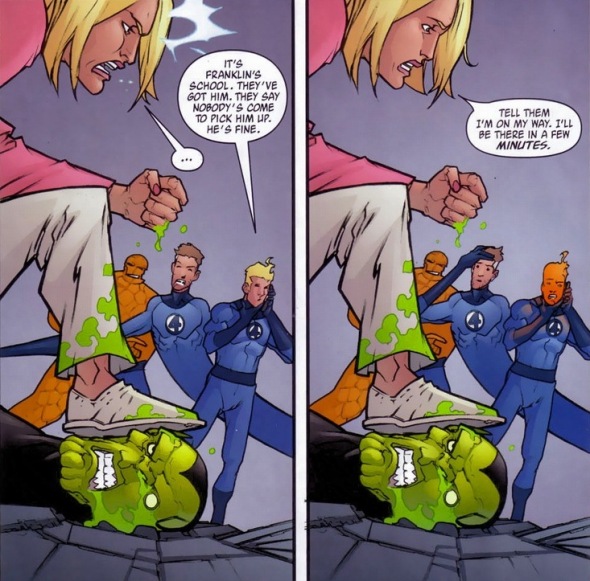 Combine the strongest member of the Fantastic Four with the berserker rage of a mother thinking her son’s hurt, and supervillains don’t stand a chance.  I’m not saying Mr. Fantastic should purposely put Franklin in danger, but fights would become significantly easier.

Anyway, back to our regularly scheduled supervillain collecting: 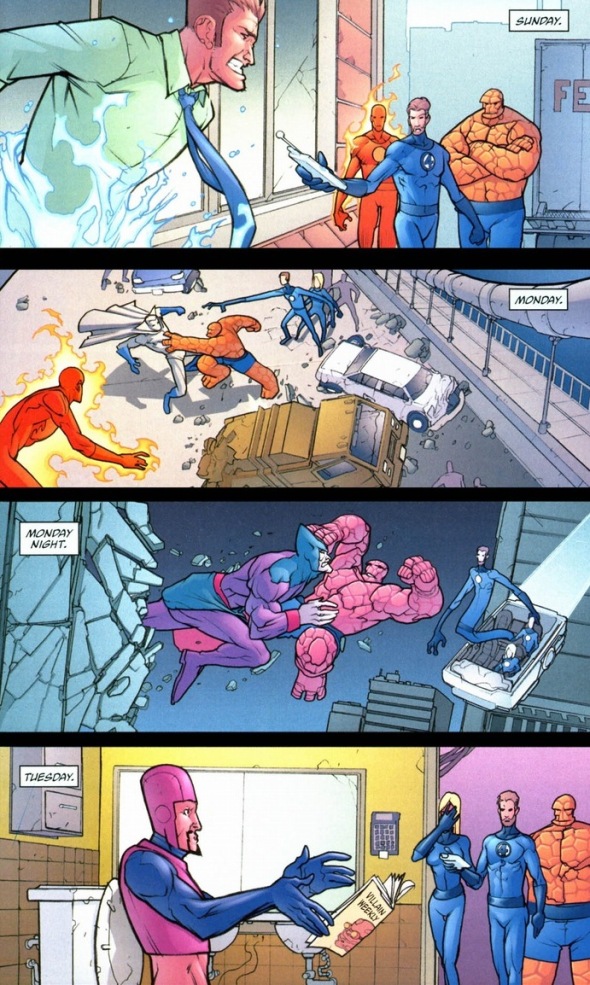 Sadly, superhero adventures can never have any plan go perfectly.  Makes for bad storytelling.  So soon, the prison goes from this: 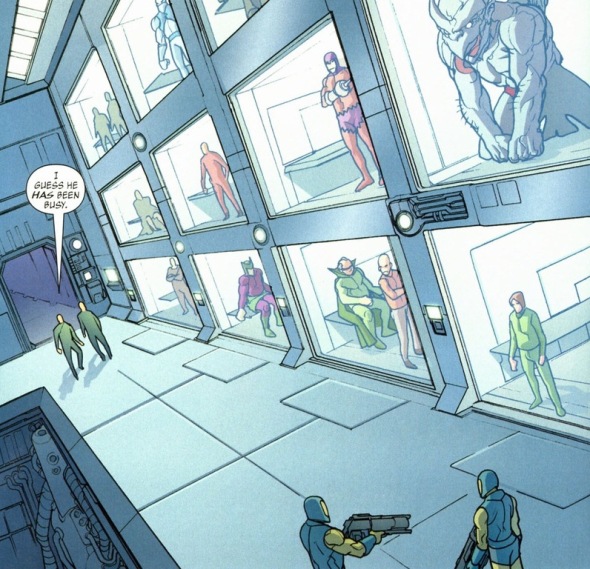 Ideally, I would announce that I read superhero comics because I enjoy the struggle between the complex themes of morality through an artistic expression of literature, but I’m man enough to admit the truth: I like to see punching.

The Fantastic Four’s popularity does partially stem from ingenious and effective forms of teamwork.  I guess, also matching uniforms.  But watch as they bark orders at each other that secure a quick and important victory against their entire rogue gallery: 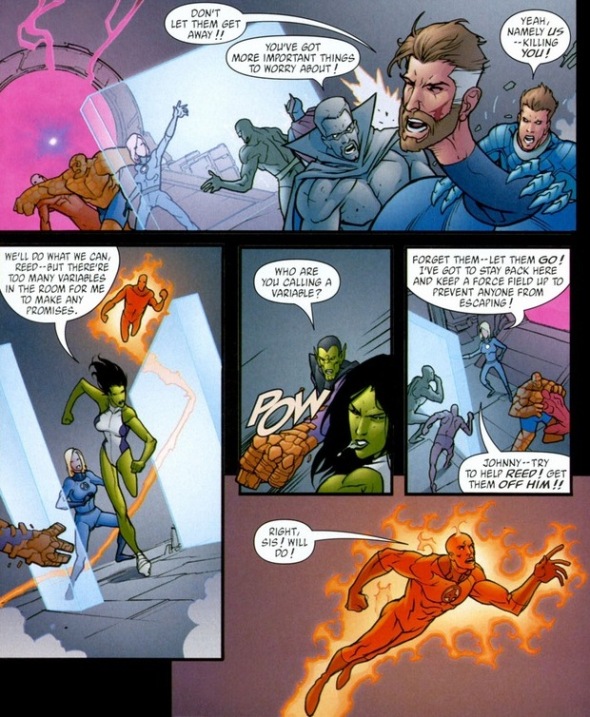 Big success!  As long as you don’t count the complete failure and breach of their prison idea.  I’m not going to spoil the mystery of the whole true master plan, but as we wrap up the miniseries for today, please remember: don’t mess with the Fantastic Four.

Seriously, if they can take down Galactus, what chance does your giant mutant worm have?