← Superman copes with the election
Mystique: how a shapeshifter fights →

Four posts ago, we briefly covered the inside of Wolverine’s twisted/perverted/tragic mind brought on by his soul being sent to Hell.  Well, he escaped, and Wolverine isn’t really a big fan of stuff like massive physical and psychological torture.  Being proactive, how’s he going to assure he won’t be sent back to the eternal flames against his will again?  Did you guess it involves impalement?

Today we cover Wolverine #9, written by Jason Aaron and drawn by Daniel Acuña.  Also, I’m using a huge chunk of the issue.  As my knowledge of copyright laws is about equal to my knowledge of calculus (I think it uses letters?), I hope I don’t get a nasty e-mail in a few months.  Y’see, this issue doesn’t have much dialogue.  Instead, we go on a movie-esque chase through the city as three warriors battle for supremacy in a style extremely well-suited for comic books.  Yes, I’m biased, but even if you don’t understand or particularly like superheroes, I hope you’ll at least recognize comics as both literature and an art form.  With a lot more punching.

So how does Wolverine know Mystique was behind his soul’s misadventure?  His usual methods:

Unfortunately, before Wolverine can enact his revenge, this happens:

Meet Lord Deathstrike.  His sister Lady Deathstrike has been a pain-in-the-butt of Wolverine’s for decades.  I believe she was even in one of the X-Men movies.  While her brother doesn’t have those cool claw nails, he does possess her general disregard for human life, a  passionless demeanor, and a talent for murdering.  The usual supervillain traits.

Certainly Mystique can take more punishment than a normal civilian.  Shifting her organs around or whatever.  But exploding sniper bullets?  That’s going to be harder to shake off.

Now comes the fun part.  I mean, this is a Wolverine story.  Though when an X-Man secretly wants to murder someone who’s wronged him, he’s not allowed to take the jet.  Moral ethics and the high price of jet fuel, I guess.

I admire Wolverine for trying to claw her by sticking his hand out the window.  Poor guy just doesn’t have any projectile superpowers.  Let’s watch as the fight becomes a crazy action movie — this issue is super fun.

I mentioned last time that Mystique gets by on brains more than brawn.  And what’s smarter than a giant machine gun?  As you read more and more about Mystique, you realize that a good chunk of the world — both good and bad guys — would like to see her dead.  To describe her as mischievous might be an understatement.  Sure, supervillains like Dr. Doom ooze far more hatred and bitterness from the vengeful masses and their hired help than little Mystique, but she also doesn’t hide behind an army of Doombots and the complete mastery of both scientific terrors and powerful dark magic.  So she has to use giant machine guns. 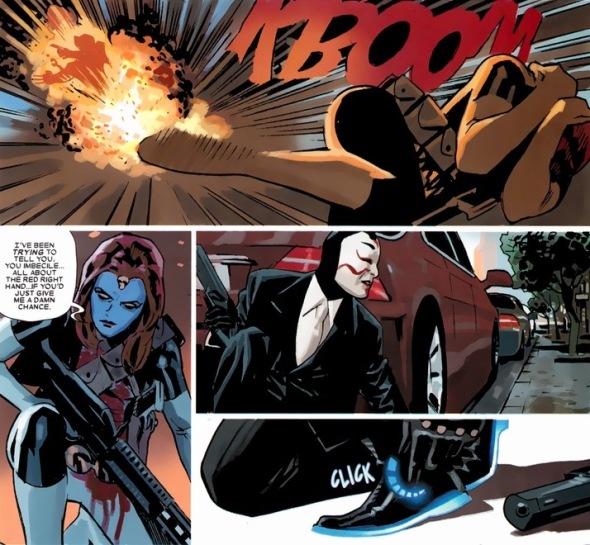 The Red Right Hand actually commissioned the whole sending-Wolverine-to-Hell thing.  They’re a group of crazy people that you’ll have to read the next arc on your own to find out about, and the plot twist at the end remains one of the finest I’ve ever read in comics.  Anyway, back to bullets and explosions. 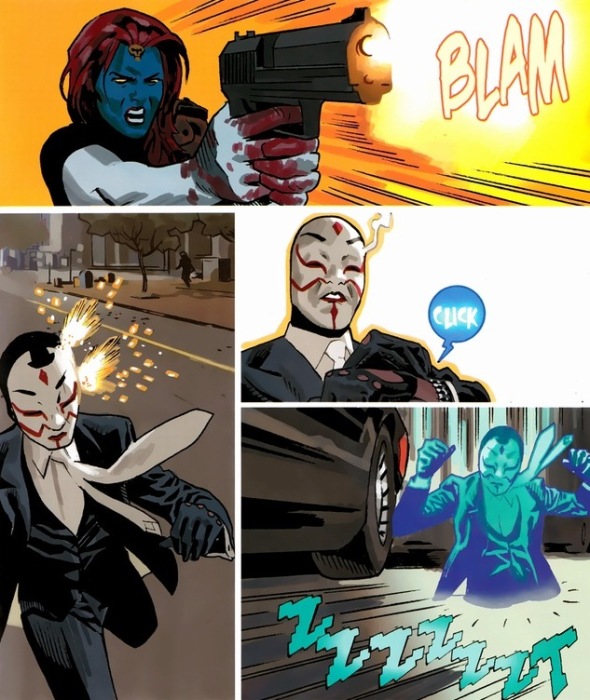 With the well-dressed man out of the way, we can finally get to the confrontation you’ve been waiting patiently.  Spoiler alert: Wolverine’s not exactly known for his eloquence.

And for the first time ever in comics, Mystique has been killed.  Like officially, 100% killed.  Revenge completed.  She actually gets resurrected a few issues later by the evil ninja group The Hand, but you can read that later.  Fourteen issues later, Mystique teams up with Wolverine’s arch-nemesis Sabretooth to enact her revenge.

Oh, and not just on Wolverine.  Don’t forget about our dapper assassin.

3 Comments on “Wolverine vs. Mystique”