The tragic tale of Speedball and Penance, Pt. 1

(I hope enough time has past that this article isn’t in bad taste.  I apologize if I’m wrong.)

Robbie Baldwin is a young boy’s dream situation.  As a teenager and like most superhero origins, he gets into a freak scientific accident.  A strange dimensional energy slams into him, giving him the ability to generate adorable energy balls as well as bounce around like a pinball machine.  Here’s his premiere in Amazing Spider-Man Annual #22 back in 1988.

As a good-looking, surprisingly capable superhero, he became involved with the New Warriors team and gained fame considerable to our real world child stars.  Trust me, I’m surprised as you are considering his superpower involves colorful bubbles.

Speedball’s life progressed with all the glory and bliss that we all secretly covet.  Well, until 2006.  If you’re not up to date with Marvel history in the 2000s, that year began the widely talked about Civil War.  Y’see, a few superheroes attacked bad guys in a civilian zone, and in a disastrous underestimation of their opponents, they let the supervillain Nitro explode.  He killed 612 people, including children.  Oh yeah, you figured it out.  Baldwin and his New Warriors set off the events that would shape the Marvel universe for the rest of the decade.  Witness it for yourself in Civil War #1, written by Mark Millar and drawn by Steve McNiven. 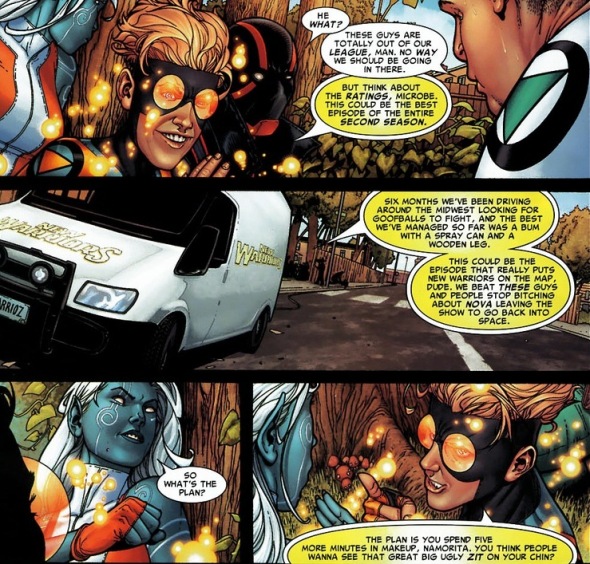 In a genius PR move, the New Warriors film a reality show of their battles.  Now, why is Speedball acting like such an egotistical jerk?  Duh, because that’s what makes redemption so much better. Enjoy Baldwin’s last fight as Speedball for the next few years:

Look, teenage superheroes are extremely important to the mythos of comics.  Spider-Man and the X-Men started their crimefighting careers as teenagers among others.  Every few years, a new team of young kiddos pops up to be trained as the next generation of Avengers or whatever.  Seriously, there must be at least twenty superpowered children starring in Marvel titles at any given time.  But some supervillains simply can’t be taken down by a group of kids.  Like Nitro, who can do this:

The resulting blast kills all of the New Warriors.  Poor Namorita and her relatable skin problems.  A few hours or so after the explosion, the police find a single survivor.  Turns out a bunch of bubbles can also absorb the impact of more than an uppercut.  In Civil War: Frontline #1-10, written by Paul Jenkins and drawn by Steve Lieber, we see Speedball’s life-altering aftermath. 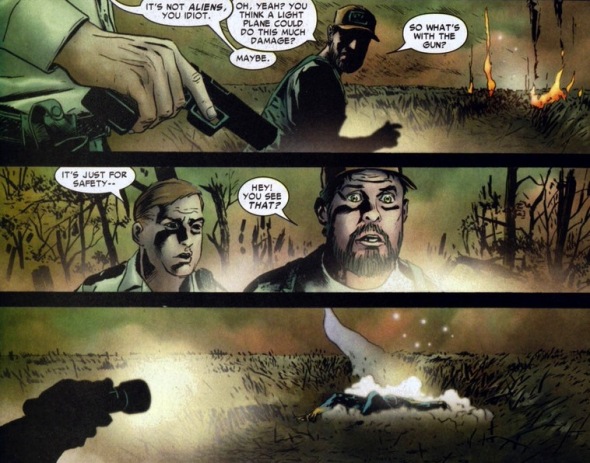 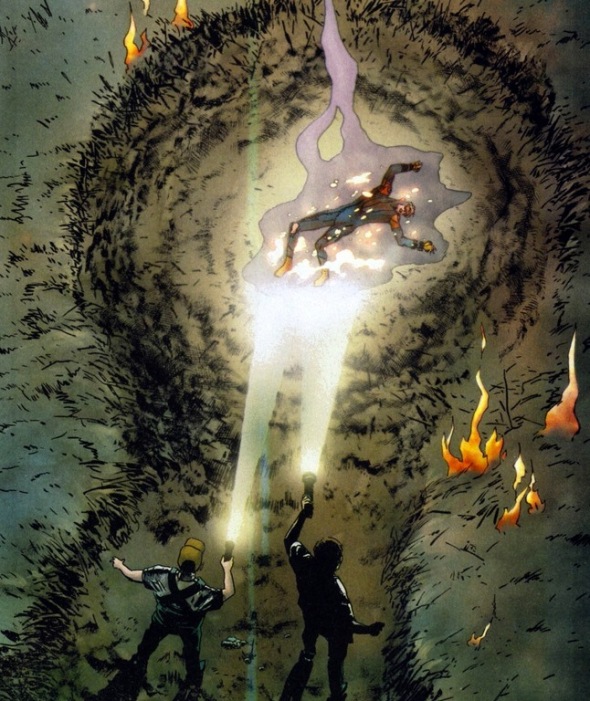 Understand that Speedball’s the only survivor of his team, and that it was his own recklessness that killed them despite loud objections beforehand.  Couple that onto his emotional stability from being smack in the middle of puberty, and the guilt totally destroys poor Baldwin. 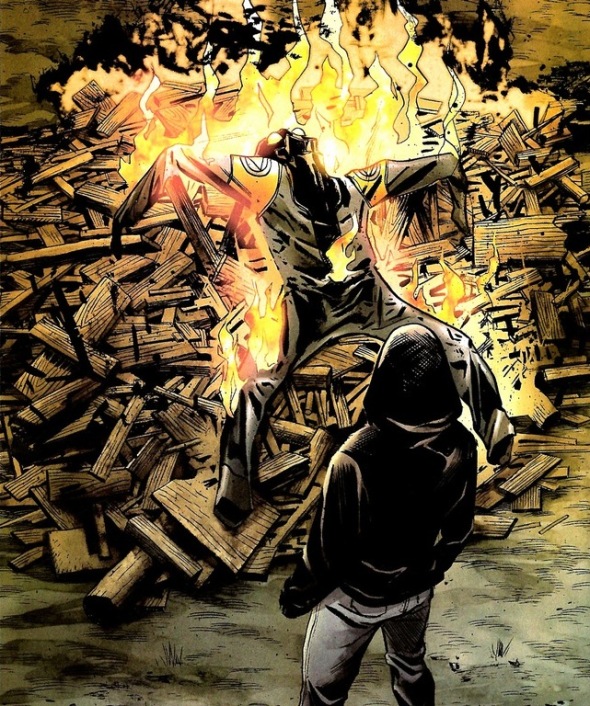 Y’see, his powers disappeared from the PTSD.  He quickly discovered that he could gain back his energy blasts, but only when suffering from extreme pain.  Perfectly suited to his guilt, Baldwin creates a suit that would make even the kinkiest fetishists jealous.  Lots of spikes, needles, and other things that make him bleed installed throughout new costume. 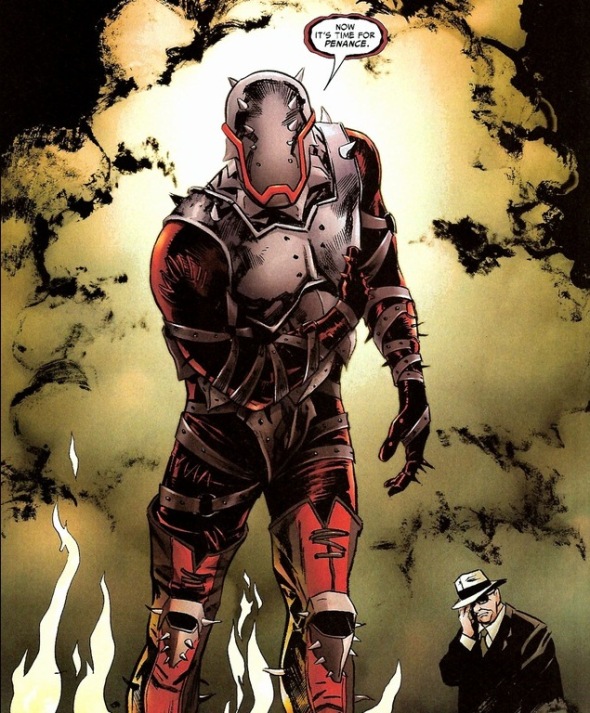 If you noticed in the pictures above, his powers changed too.  From potential alone, Penance may quite possibly be one of the most powerful superheroes in the Marvel universe.  I’m serious.  Part of his redemption included joining Norman Osborn’s Thunderbolts, the team of former supervillains working for the government.  In Thunderbolts #116, written by Warren Ellis and Mike Deodato Jr., we get to see just how incredibly powerful he’s gotten since his transformation:

I promise you, Penance’s one of the good guys.  I’m just making sure you remember that.

No longer able to create whimsical bubbles, Penance uses a more brute forth type of attacks.  Think of it like a flesh-ripping forces of energy instead of a Chuck E. Cheese ball pit. 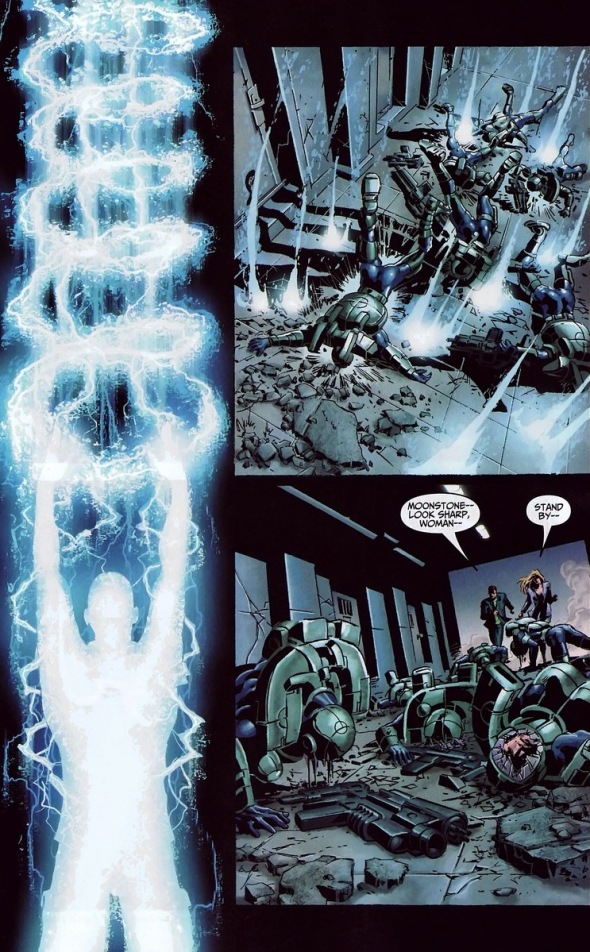 Luckily for everyone else, Baldwin still has all his old weaknesses.  Like massive head trauma. 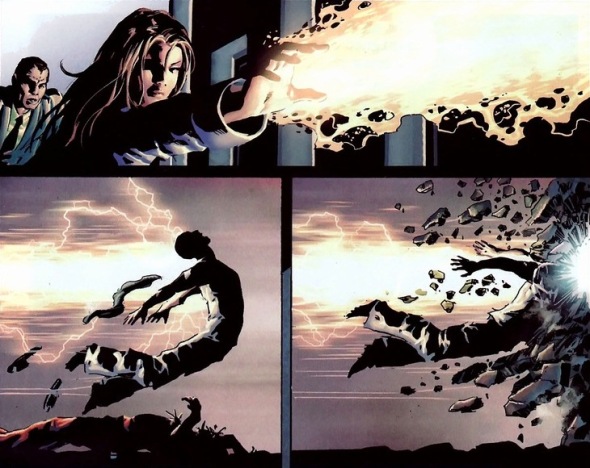 Our story has just begun.  Part two on Monday will cover Penance’s rematch with Nitro (and it’s dark). We’ll finish up on Wednesday with Penance’s transformation back to Speedball and the final acts of his redemption in the city where this all started.

8 Comments on “The tragic tale of Speedball and Penance, Pt. 1”