← Nothing funny about Joker and the GCPD
The tragic tale of Speedball and Penance, Pt. 2 →

The tragic tale of Speedball and Penance, Pt. 3

As we come to the conclusion of Speedball’s transf0rmation into Penance, the people killed in Stamford due to Speedball’s reckless actions against Nitro still weighs heavily on our hero’s mind.  On his path to making amends, he’s currently working for Norman Osborn’s government-sanctioned Thunderbolts.  But when he receives word that Nitro’s being held in Latveria, he attacks the country and mercilessly tortures the supervillain.  Now, Osborn’s no stranger to skirting the law, but after Penance almost sparked war between two nuclear powers, it’s time to ship the emotionally disturbed teenager off to greener pastures.

The next step in Robbie Baldwin’s redemption begins in Avengers: The Initiative #25-30, written by Christos N. Gage and drawn by Humberto Ramos & Jorge Molinas. 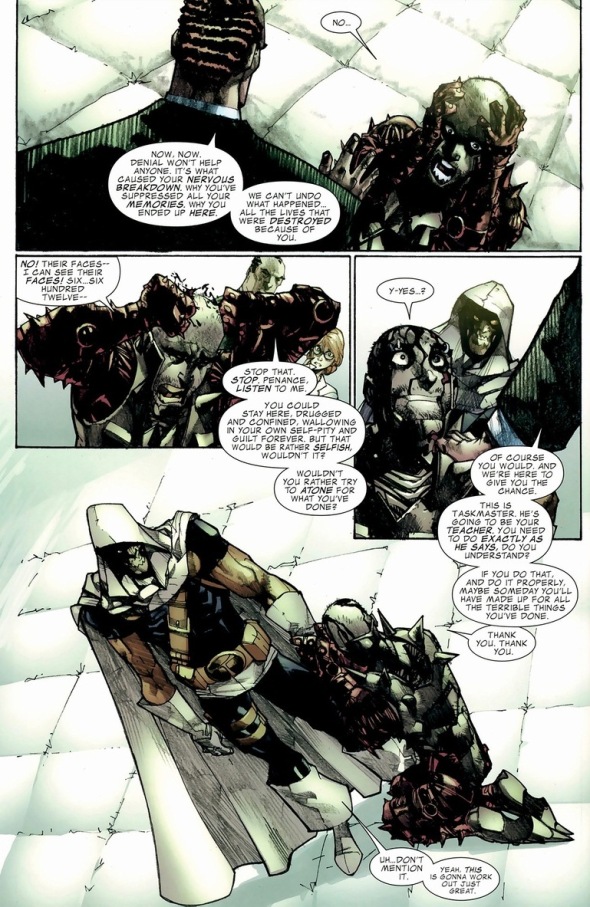 Okay, so maybe Osborn’s more interested in having Penance blow up bad guys than healing a broken, ruined kid.  But for the first (substantial) time since the Stamford incident, Penance gets something he badly needs: therapy. 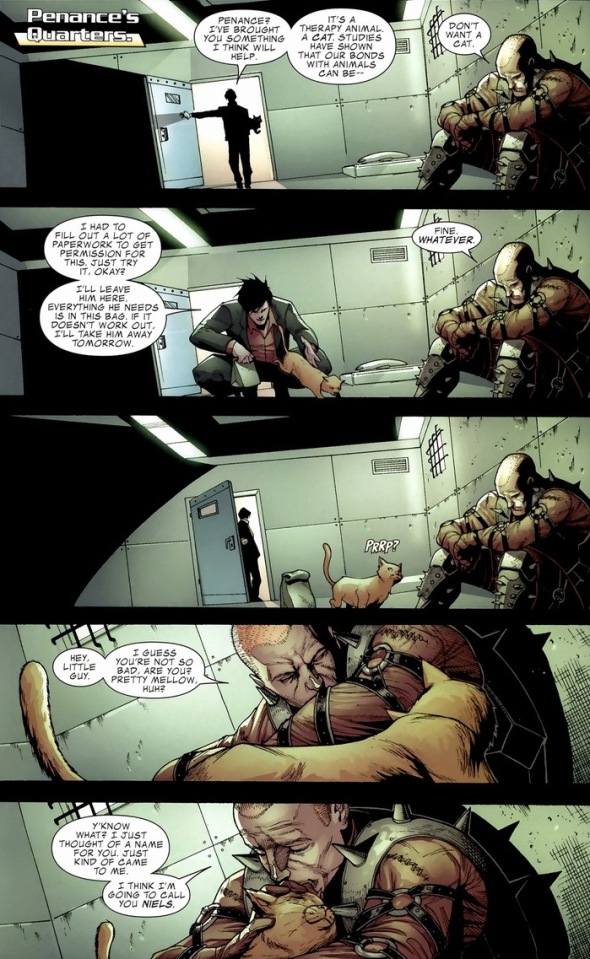 And like all good comic book epiphanies, Penance has his during a battle against his former friends. No one knows Penance’s secret identity as Speedball except the Green Goblin and his lackies.

Understand that his breakthrough comes after a good year of suffering and scars.  But unlike real life, comic book characters tend to forgive pretty easily.  Wolverine has killed God knows how many innocent people while brainwashed and he’s now running the most respected X-Men school in the country.  Scarlet Witch wiped out 99.9% of the mutant population with three words, and she’s now a card-carrying Avenger.  Redemption not only makes for a great story, but it’s almost certainly a mandatory part of a superhero’s life story by this point.  It’s about time Baldwin realized the truth: 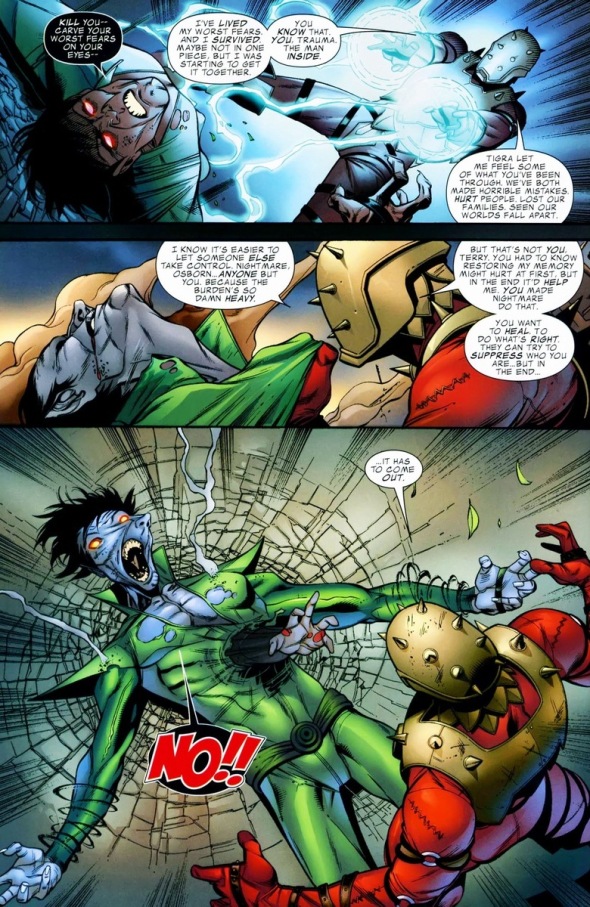 To truly rid himself of his guilt and pain, he only has two items left to cross off.  First up:

At this point, Penance has accepted enough that he can actually go back to being Speedball.  By no means is he okay, but he doesn’t need 600 spikes tearing at his flesh every time he throws a punch. To help out the Avengers, Baldwin accepts a job teaching at the newly formed Avengers Academy. We’ll be seeing a few select scenes from Avengers Academy #10, written by Christos Gage and drawn by Sean Chen. 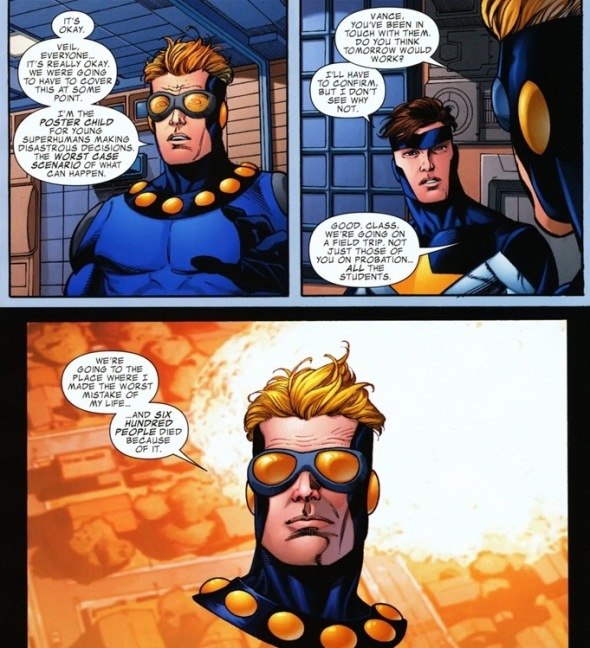 Though remember what I said about Speedball not being totally cured?

At this exact moment, like many important moments in a superhero’s life, bad guys attack.  If you ever wonder why that happens, think about it from a math perspective.  A more popular hero, like Spider-Man or Iron Man, probably has a good twenty supervillains in their main rogue gallery.  That’s not counting the hundreds of minor villains they’ve fought.  Counting crossover baddies, let’s say fifteen supervillains for every superhero.  If I had to guess the amount of superheroes operating in just New England alone, it’s probably at least a hundred or so.  That’s 1500 baddies running around at one time, minus those in prison or alternative dimensions or whatever.  I’m just saying there’s a reason why when superheroes go on patrol, they usually find some trouble.  Like at the Stamford Memorial.

Oh, and Speedball still has all his Penance powers.  More importantly, Baldwin finally gets told the truth: while he did inadvertently cause the death of 600 innocent people, he’s prevented far more than that in his career as a superhero.  It takes time, but at some point the good’ll outweigh the bad. 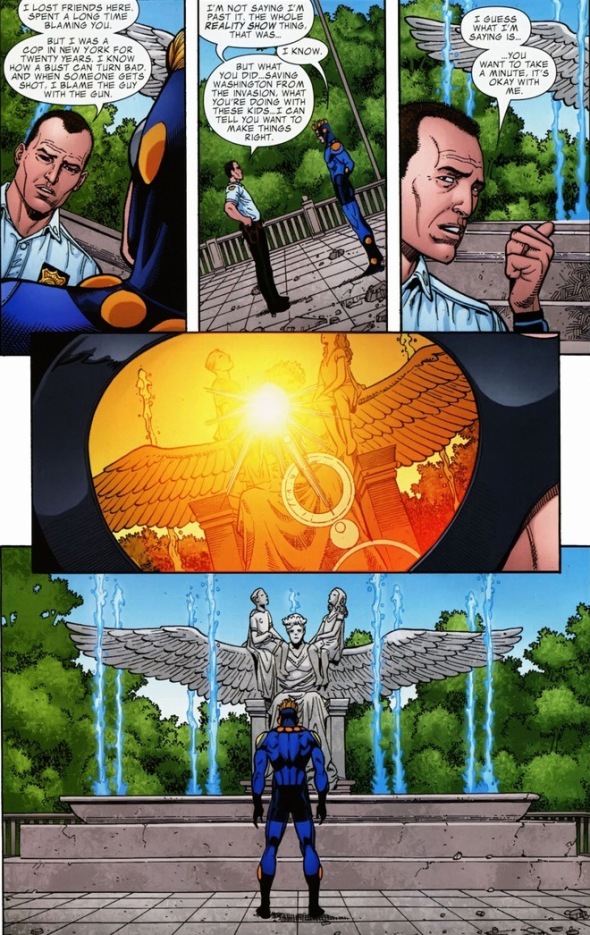 Speedball will move on and be okay.  But now comes the most influential part of his redemption.

During the Marvel event Fear Itself, horrible stuff terrorizes the entire world.  Lots of people dying and catastrophes hitting the planet.  Baldwin heads to Stamford to help protect the city under attack.  I don’t think you’d be surprised to hear that his heroic return isn’t really well-received.  If you want the whole story, check out Fear Itself: The Home Front #1-7, written by Christos Gage and drawn by Mike Mayhew.  Anyway, despite citizen protests, he saves the town:

You know the saying of forgive, not forget?  Stamford decides to take that approach.

Feels good, right?  Finally over his tragic mistake, what’s next for Speedball?  I don’t know his current whereabouts, but I can show you this from Avengers Academy #20, written by Christos Gage and drawn by Tom Raney: 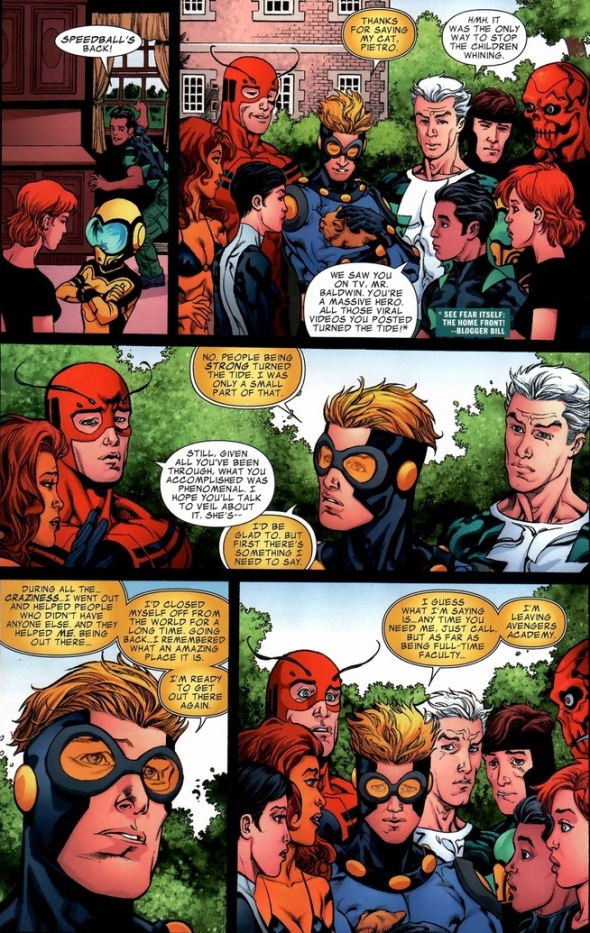 Wherever he is now, the man’s doing some good.  Like a superhero should.

7 Comments on “The tragic tale of Speedball and Penance, Pt. 3”