← Spider-Man vs. Doctor Octopus rewind, Pt. 2
I explain the events that led up to Superior Spider-Man →

With Doctor Octopus now inhabiting Spider-Man’s body, I thought we should roll back time a bit and check out a few of their previous battles.  Most importantly, I want you to see Doc Ock’s outfits over the next few articles.  That man may change clothes often, but a fashion connoisseur he is not.  Let’s not beat around the bush and jump right into Spectacular Spider-Man #6-10, written by Paul Jenkins and drawn by Humberto Ramos.

As you know, Spider-Man’s one of the few “street” superheroes in New York City.  That means he webs out of his apartment and actually swings around the city once or twice a day to check for crime. I actually never thought about this until now, but besides Spider-Man and Daredevil, the city really doesn’t have much in superhero patrol.  Captain America and the Fantastic Four think too highly of themselves to busy themselves with bank robberies and muggings.  Though to be fair, Spider-Man can’t really take on Galactus anyway. 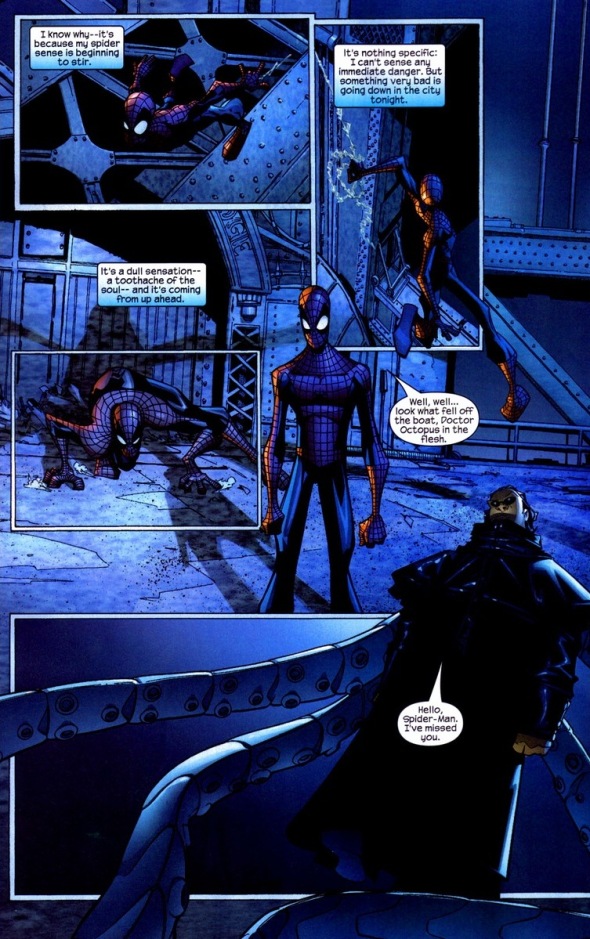 You like the black trench coat?  Doc Ock’s wearing Matrix cosplay.  Anyway, the evil doctor has a preposition for our hero.

Doctor Octopus can always be counted on for two things: his enormous ego and long, windy speeches.  He’s such a beautifully stereotypical bad guy.  Though this time, Octavius has a plan that’ll force Spider-Man to comply with his demands.  Did you guess it’ll be unnecessarily world-threatening?

Current events!  The best hope for peace in the Middle East depends entirely on Peter Parker unmasking himself in front of the world.  Why?  I don’t know, that’s just what supervillains do.  Doc Ock tries to explain this to his hostage in his normal verbose manner: 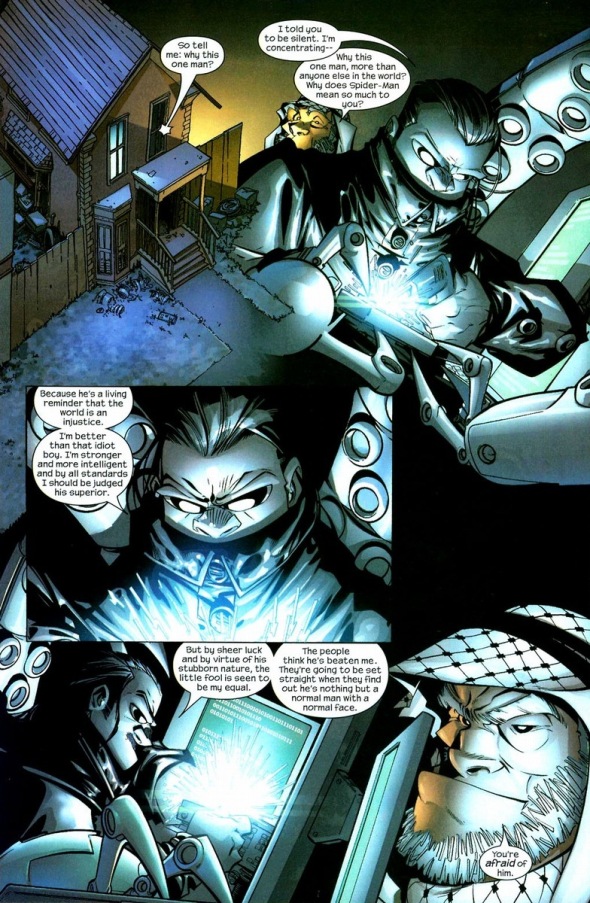 I always assumed that the people of New York City knew that Spider-Man was a normal man with a normal face.  God knows they’ve seen enough skin with his ripped up costume after brawls.  Look, if you ever question Octavius’ madness, just remember that Octavius is mad.  The crazy definition.

So Spider-Man has to make a decision.  A complicated decision.  Aunt May sums it up best:

The suspense getting to you?  Don’t you worry, because our dear hero has a plan.  A cunning plan. 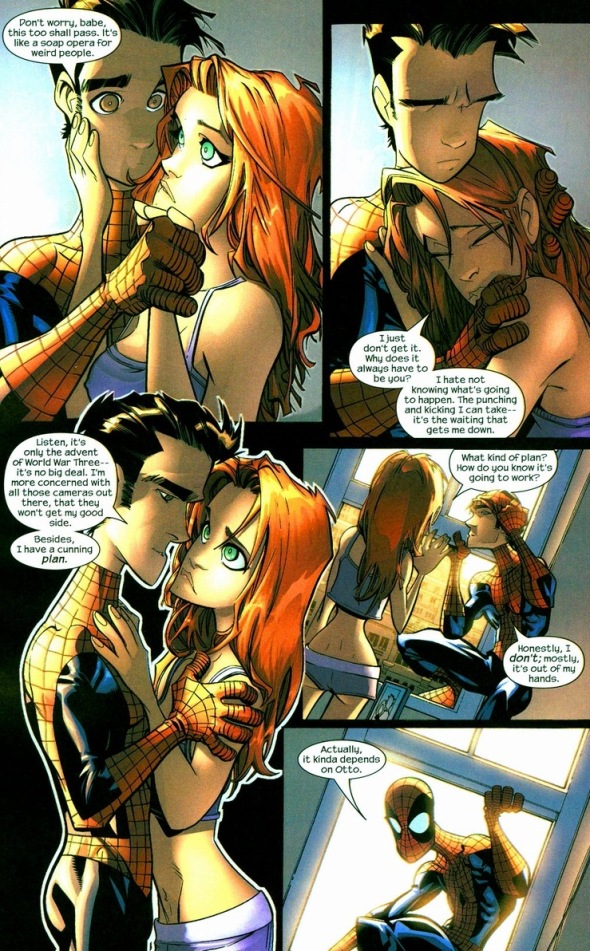 This next page isn’t relevant to our story, but it’s super cool.  I really like Ramos’ art.

Anyway, time to shut Doc Ock down.  Oh, did I forget to mention subplots with disgruntled detectives, a New Zealand best friend, and Mossad?  I’ve skipped a lot. 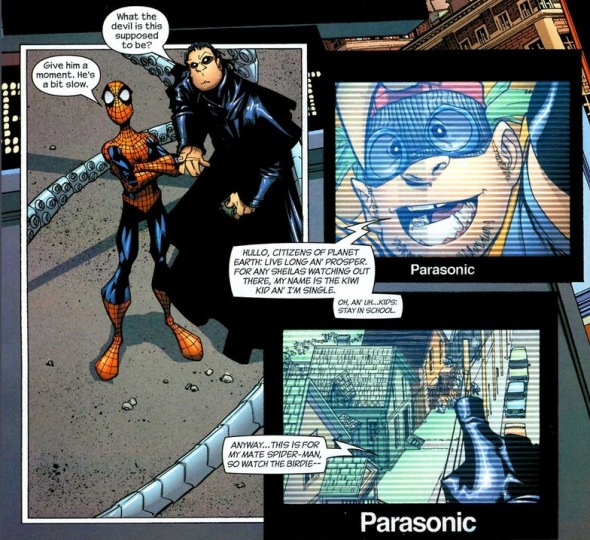 Spider-Man wins.  He always wins (except for y’know, the most recent issue).  All that’s left is a few punches to fell the doctor and everyone goes home fulfilled. 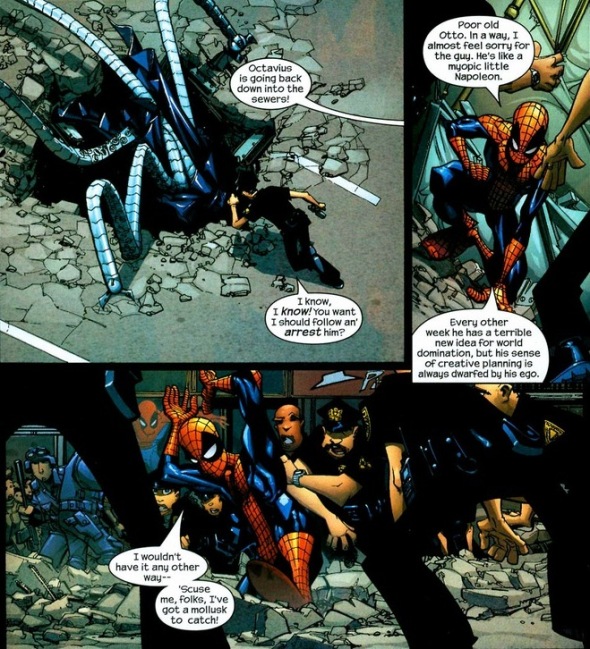 Spider-Man just summarized Doc Ock better than I ever could.  Readers sometimes forget just how much of genius that Octavius possesses.  He’s easily on Tony Stark or Norman Osborn’s level of intelligence.  But like Osborn, instead of curing cancer, he’s content with throwing pumpkin bombs or elaborate plots to destabilize the Middle East if he doesn’t get a spandex mask.  Octavius touched upon it earlier: his obsession with proving others to be inferior has prevented him from embracing his own superiority.  Hopefully Superior Spider-Man will change that — and a lot more punches.

Anyway, the fight goes to the sewers. 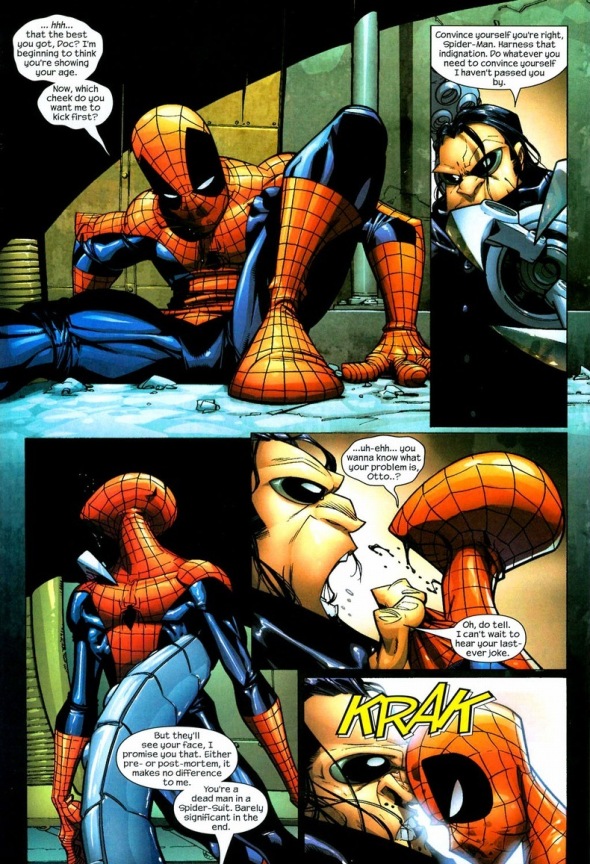 You know those 86 counts of massive head trauma Doctor Octopus mentioned in Amazing Spider-Man #600?  There’s one.  Now comes the physical and emotional beatdown by our hero.  That’s what we expect in comics. 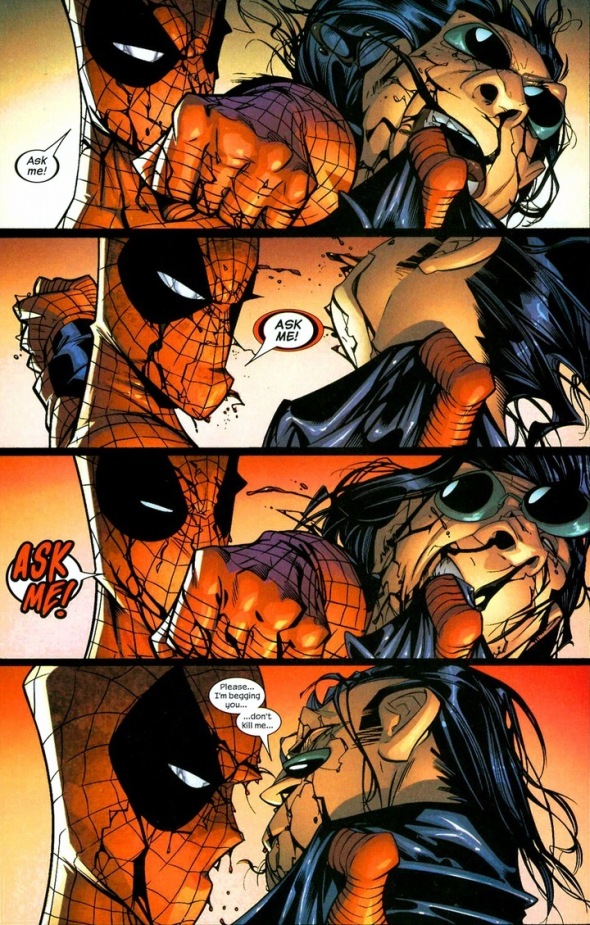 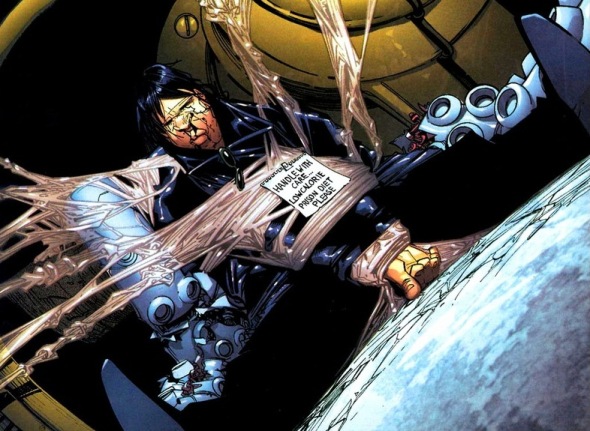 Doc Ock deserved it.  And I don’t know where Spider-Man keeps a pen and paper in his suit either.

One Comment on “Spider-Man vs. Doctor Octopus rewind, Pt. 1”