While we’re on the subject of Iron Man, we should take advantage of the last article and watch him struggle against insurmountable odds.  Specifically, the Grey Gargoyle magical-hammer-wielding monster.

Know anything about Grey Gargoyle?  You probably shouldn’t.  Whenever Grey Gargoyle touches someone, they turn to stone for an hour.  That’s really it.  The supervillain gets thrown in against any hero who needs a baddie to beat up in between the real plot.  I mean, the dude looks like this:

Well, until the Marvel event Fear Itself, that is.  Seven magical Thor-ish hammers crashed on the planet, turning each of the lucky users into demonic powerful monsters.  Unfortunately, Iron Man doesn’t know this yet.  He’s about to find out in Invincible Iron Man #504-505, written by Matt Fraction and drawn by Salvador Larroca.

Click on the double-spread below for a larger version: 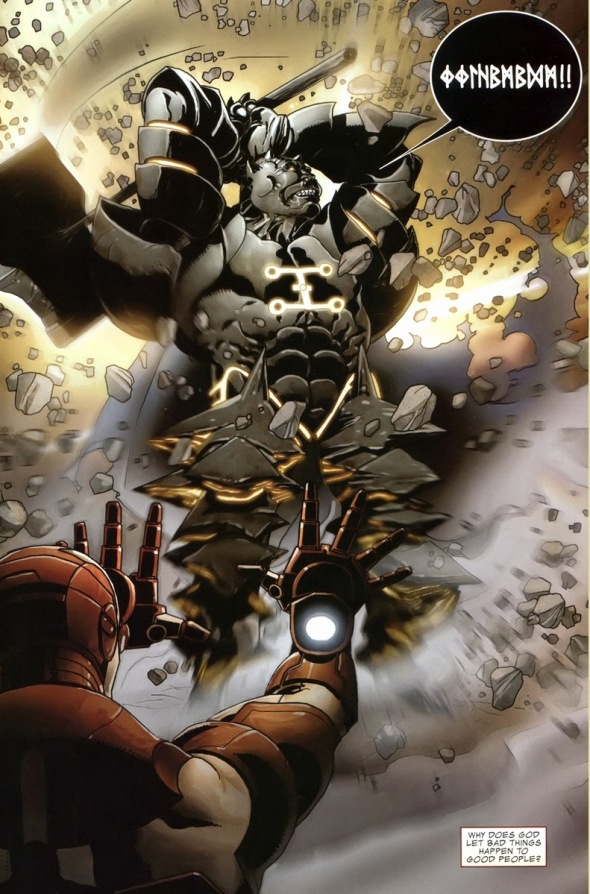 Okay, so let’s go over the odds of each combatant.  With the possession from the hammer, Grey Gargoyle’s a mindless monster, incapable of anything beyond primal, instinctive actions.  Major weakness there, except for that whole Thor-levels of strength he now wields.  Remember the last time Stark fought Thor?  I do.  Very bad news for Iron Man.

Look, superheroes get knocked around all the time.  No big deal — except for that whole the city’s-turned-to-stone thing.  Because every misstep leads to this: 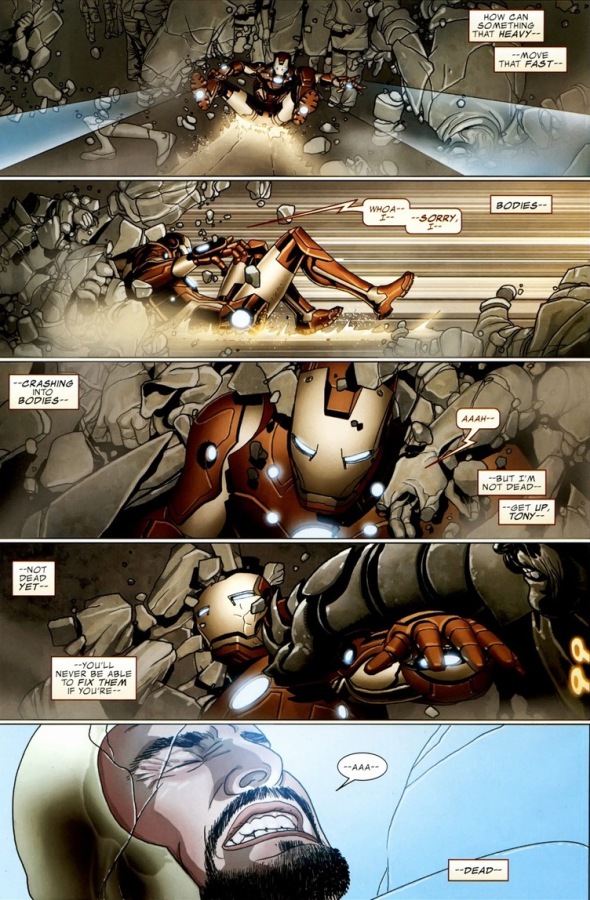 Round one ends as you expect it.  Gruesomely.

One small benefit of fighting a mindless monster — Grey Gargoyle can’t tell the difference between unconsciousness and death.  Especially when the opponent is wearing armor.

I know that the comic book world has little problems with massacring huge groups of people and cities.  The Ultimate universe will take down entire countries each issue.  But if you realize that every splotch of grey are wrecked Parisians, this is brutality on a horrifically visual level.  Also brutal?  Iron Man deciding it’s a good idea to stand up: 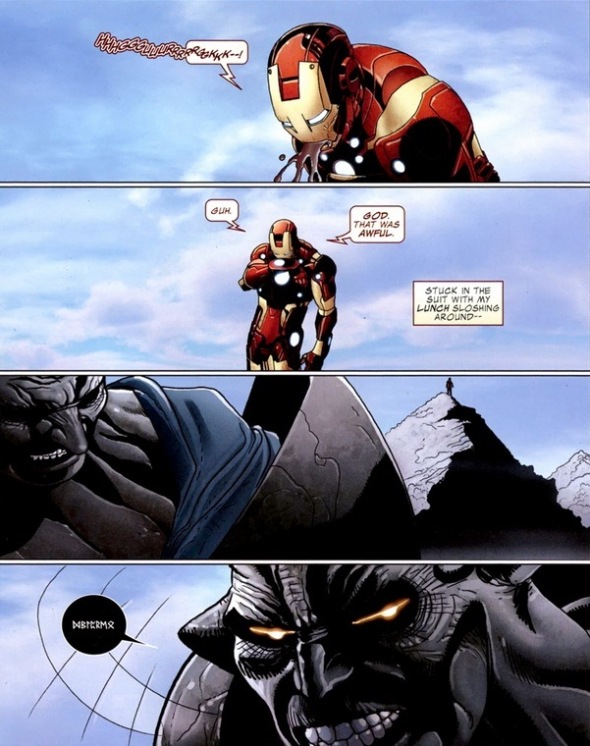 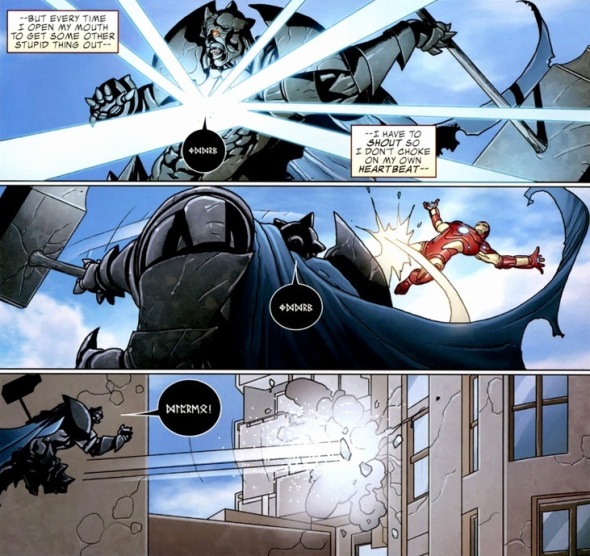 As of now, the second round’s going about as well as the first round.  I’m sure he can pull himself together and pull out a secret weapon or something, right?

Maybe not.  Luckily, at this point, one of the Iron Man clones/villains shows up to shoot missiles.  You can imagine how that goes.  I’m going to skip all that part, but this next picture is super cool: 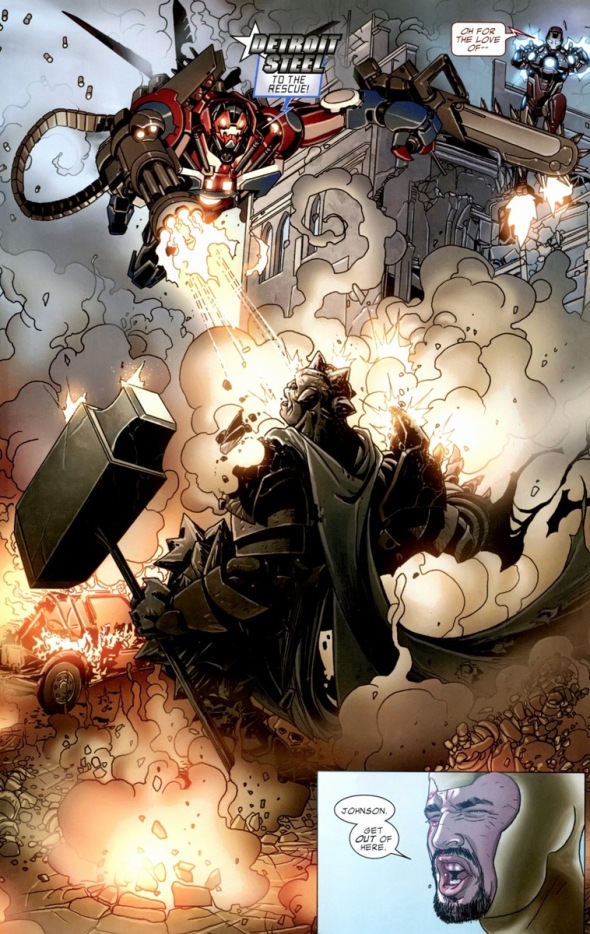 I want to mention one benefit of Iron Man comics.  He’ll always have huge robots with huge guns blowing stuff up at least once an arc.  That’s what makes Iron Man so awesome.  Then he uses his own robot suit to punch other robot suits.  God, I love it.

Always a good idea to slice off half the opponent’s head if things aren’t going your way.  And the winning blow?  Only a matter of time until Iron Man kicks him in his monster face and stands victorious over his defeated foe.  I mean, he would have if this didn’t happen: 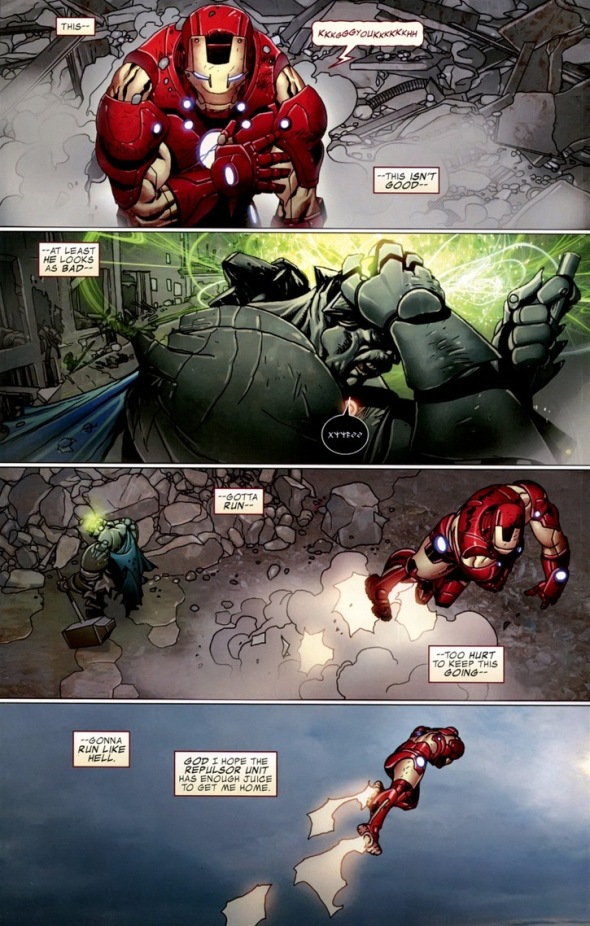 Strategic retreat.  Did they tie?  Let’s just think of this as Iron Man’s Vietnam. 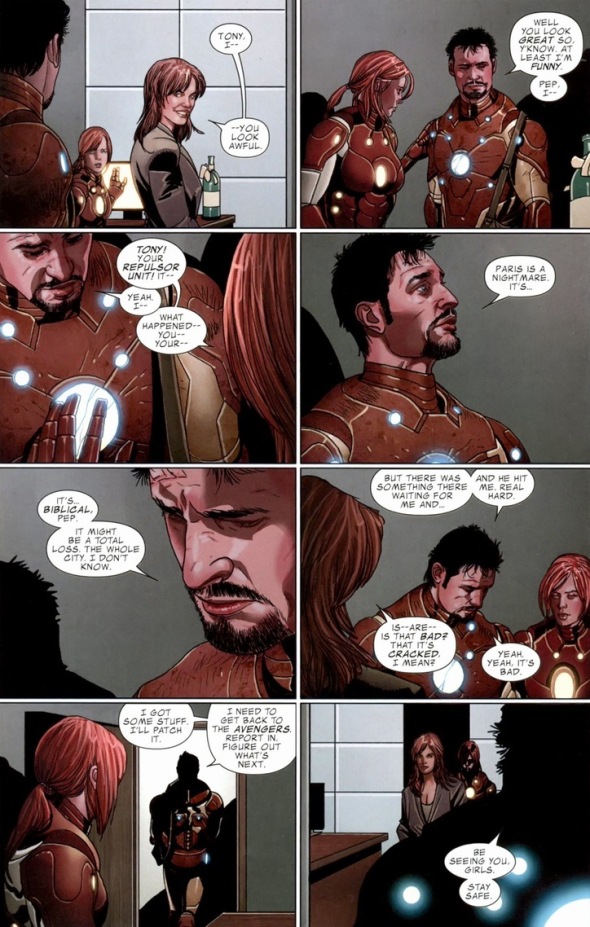 With that, the Paris brawl comes to an end.  For the rest of Fear Itself and Iron Man’s major role in the conflict, you have to buy the books yourself.  Spoiler alert: lots of new costumes.

One Comment on “Iron Man roughs up Grey Gargoyle”