Black Widow vs. the Avengers

Not that one.  The other Black Widow.  As the Russians probably weren’t too fond of their greatest super spy defecting to their great super enemy, they captured a new group of young femme fatales to repeat the process.  Then they took the best candidate, gave her the coveted title, and have her beat the old Black Widow to death.  Nice and easy.

Except not, because Natalia Romanova tends to be incredibly difficult to kill.

They team-up for the first time in the miniseries Black Widow #1-3, volume one, written by Devin Grayson and drawn by J.G. Jones, and Yelena moves on from her grudge.  Better woman and whatnot.  While never a major character, Yelena did get her own miniseries called Black Widow: Pale Little Spider and showed up a few times in other minor roles.  Until New Avengers #6, written by Brian Michael Bendis and drawn by David Finch:

And then something worse happens than a frontal lobe venom blast. 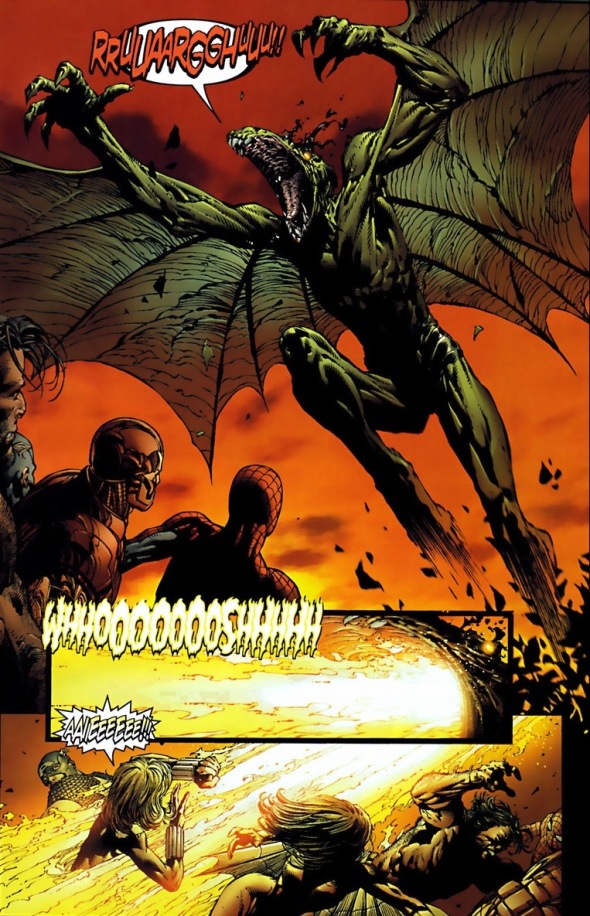 To be fair, the superheroes knew better than to traverse the Savage Land, which is a way scarier Jurassic Park.  Sometimes writers just want their characters to fight dinosaurs, and the Marvel universe provides a place for them to do so.

Poor Yelena has no superpowers, and so she takes the fire blast like many people would — badly and bitterly.  Still, one plus side of this whole ordeal:

We jump forward to New Avengers Annual #1, written by Bendis and drawn by Olivier Coipel. 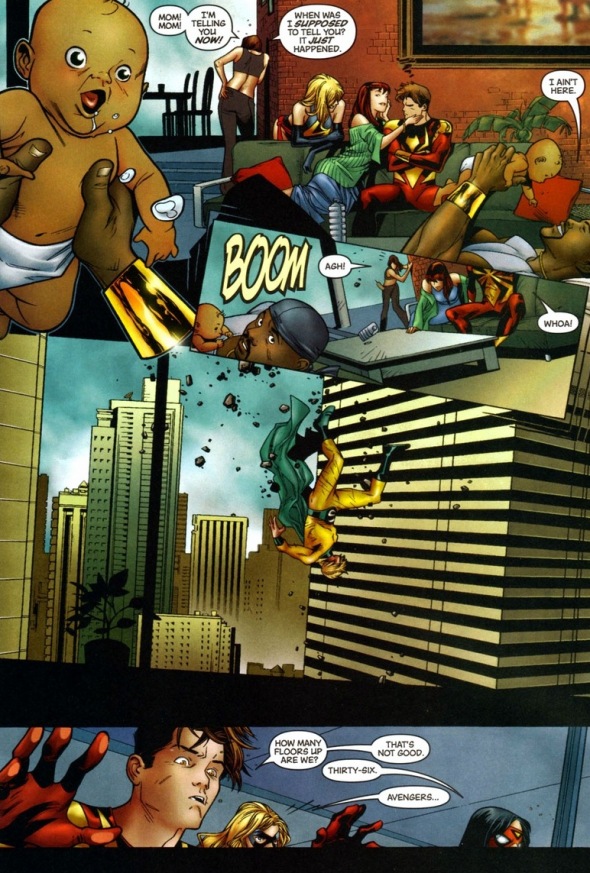 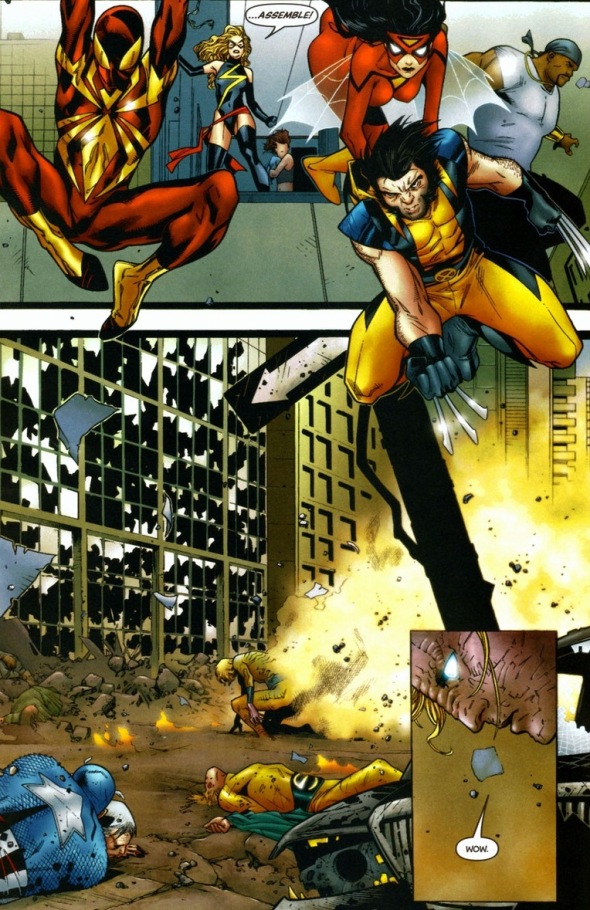 Turns out the former Black Widow has had some upgrades.  Meet Yelena Belova, Super-Adaptoid.

Basically a rip-off of DC’s Amazo, the Super-Adaptoid is a cyborg with the ability to instantly mimic any superhero powers of those it touches.  And it just touched the Sentry, Marvel’s schizophrenic Superman.  Bad news for our heroes.

What follows next is a testament to the relentless spirit of Marvel’s greatest superhero team (equal to the X-Men, Fantastic Four, Alpha Flight, Captain Britain Corps, etc. — this is no time to be making fanboy enemies).  Watch some highlights from the brawl: 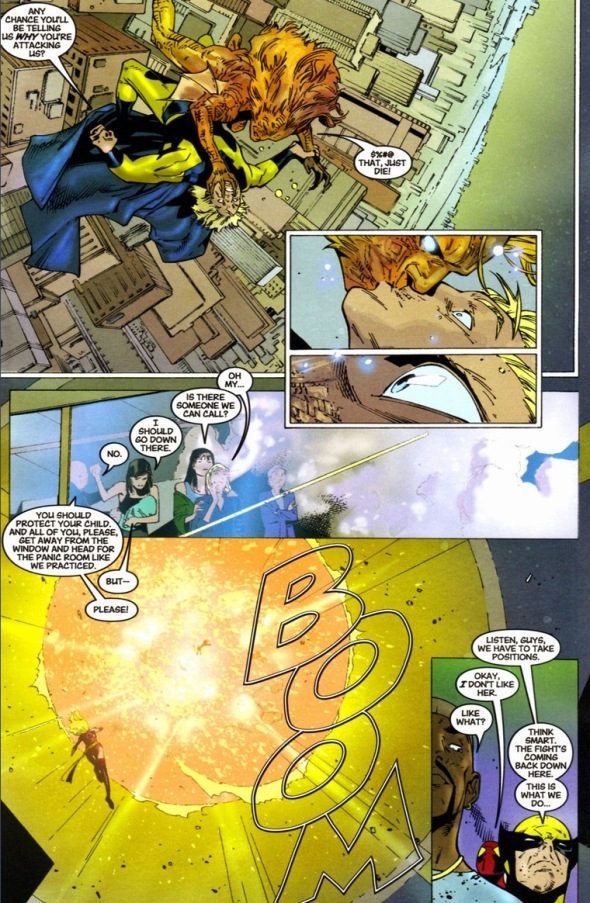 Watch as Yelena’s banter hits deeper and sharper than any weapon can:

And witness my man-crush Spider-Man.  Oh, how I swoon.

Eventually, since Super-Adaptoid has every Avenger power, Yelena remains relatively unharmed.  So Iron Man uses his brain and figures if one Iron Man won’t be enough to take her down, how about forty?

Y’see, while the Sentry has similar powers to Superman, he is not Superman.  Not even close.  While the Man of Steel’s powers come with a sense of morality and responsibility, the Sentry come with the Void.  Superman gets a way better deal. 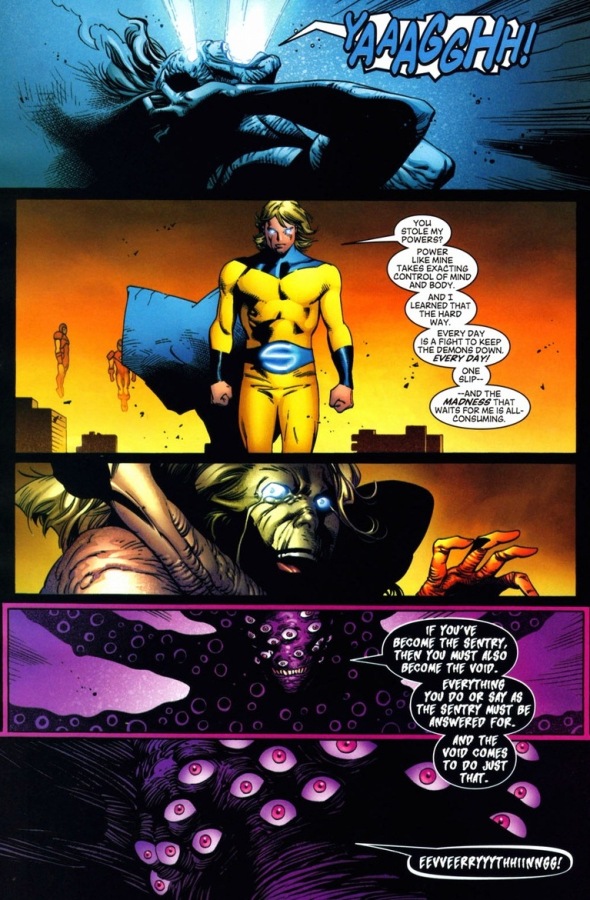 The Void can’t be easily explained.  Think of it as a demonic-ish dark side of Sentry’s persona, only with the power of all-consuming madness and insane evil power.  If even the Sentry eventually loses control (see Siege), Yelena doesn’t stand a chance.  Hydra cuts its losses. 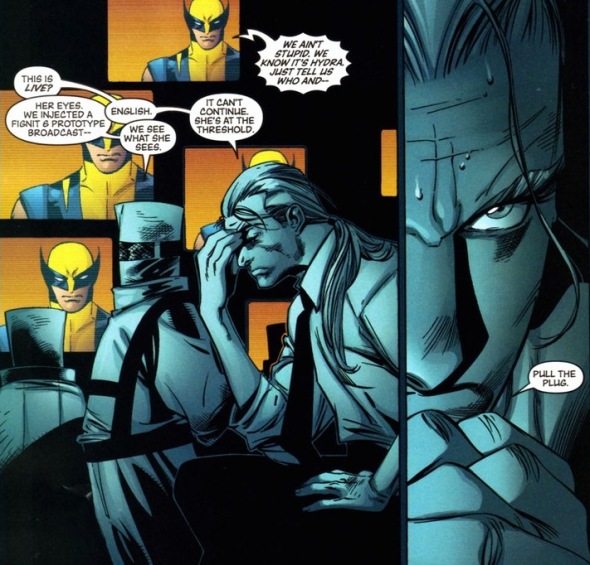 The end.  Luckily, since it’s a comic book universe, we haven’t seen the last of Yelena.  No explanation is given, but we’ll just assume some mad scientist put her goo back together or something.  More importantly, Yelena receives a second chance to prove herself an equal Black Widow to the red-headed one we know and love — as a super spy, not a lizard cyborg monster.  In an ideal world anyway.

Here she appears a year or so later in Marvel Comics Presents #5, written by Marc Guggenheim and drawn by Dave Wilkins: 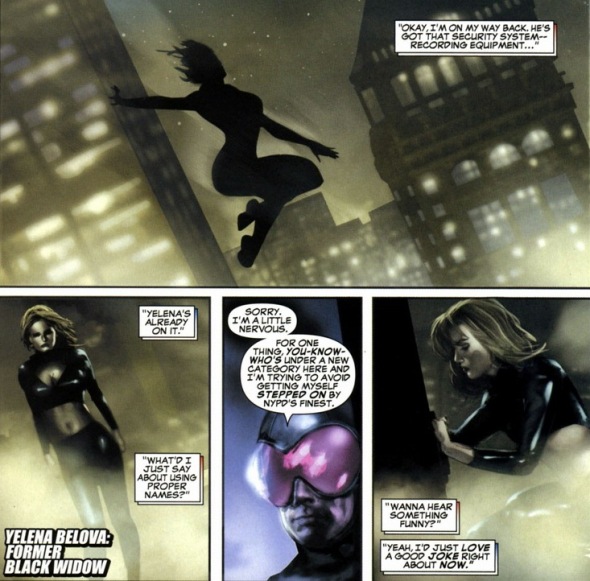 What’s she up to nowadays?  Well, she hasn’t actually been in comics since 2009, last appearing as Norman Osborn’s secret tube capture:

Oh well.  One day she’ll be back in the comic spotlight.  Hopefully.  Is it because she’s blonde?