Let’s get this right out of the way.  In 1980, superhero Hank Pym instantly became the most despised Marvel character when this one panel forever destroyed his reputation: 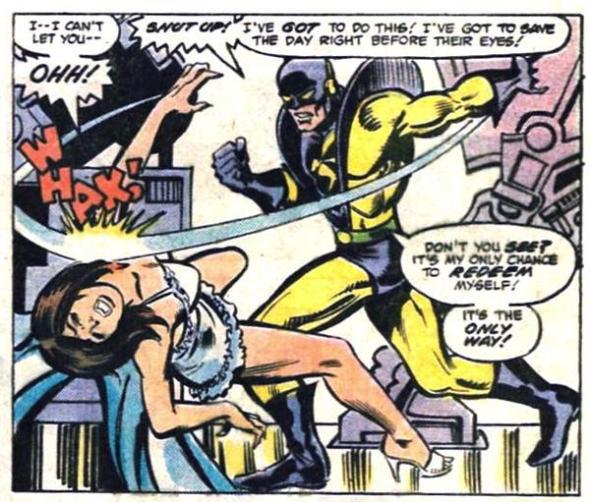 And still today, many fans (some of whom weren’t even alive when that happened) haven’t forgiven him for backhanding his wife.  I’m not saying that a superhero’s domestic abuse crosses the line when supervillains’ serial murdering gets waved off as character development.  Pym definitely deserved a good decade or so of indignant hatred, but the unforgivable aspect from fans may be a bit overblown.

I mean at that time, his wife Janet fought crime as the superhero Wasp, who regularly got sliced up, lit on fire, smashed to pieces, and more every other day as an Avenger — at that stage in her career, she probably woke herself up in the morning with a backhand to the face.  Plus, as a Marvel comic supergenius, obligation dictates that Pym must carry a horrific character flaw.  Iron Man’s a severe, passionate narcissist.  Mister Fantastic loves science more than his wife.  Black Panther annulled his own marriage to Storm without telling her first.  And Dr. Doom, well, that guy’s a tyrannical dictator on his nicest days.  Etc.  Heightened intelligence comes with a catch.

Recently, during the Marvel event Secret Invasion, the shapeshifting Skrulls invaded Earth.   Janet sacrificed her life to save all her friends.  Also, a Skrull posed as Pym and knocked up the superhero Tigra.  Bad times for everyone.  We pick up after that.

Pym (now Giant Man) becomes the head instructor at Avengers Academy, where he can try to make a difference as a long-time Avenger and blah blah blah.  Also, his dating life sucks. 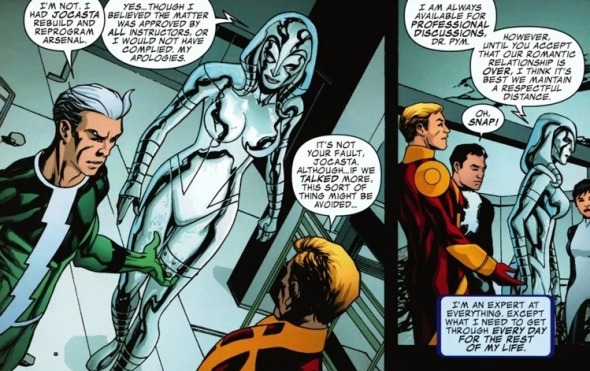 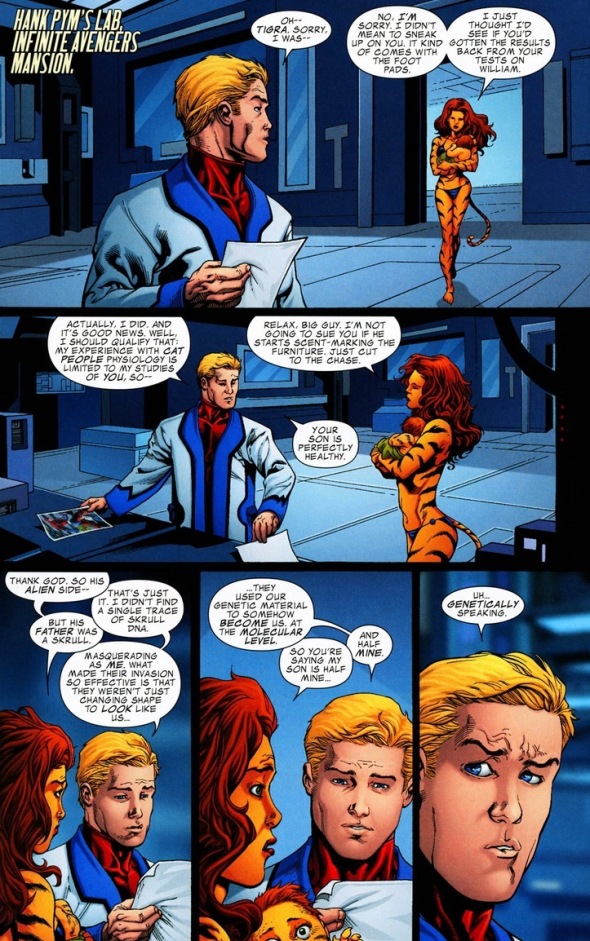 Now, this whole paternity thing tends to be confusing when aliens and ancient cat people get involved. Yes, Tigra loved Giant Man in the past, but that was a Skrull and not the actual Giant Man.  The impostor impregnated Tigra, but since Skrull shapeshifting takes place at a genetic level — the child has Pym’s DNA.  Which means Giant Man’s the dad, but not the father.

While neither Tigra nor Pym have the emotional capacity or stability to successful maintain parenthood, much less a relationship, the two will just do the best they can, gosh dang it.  Before a blast of Pym self-pity, I want you to keep these next few pages in your memory.  The dude’s an original Avenger for a reason: 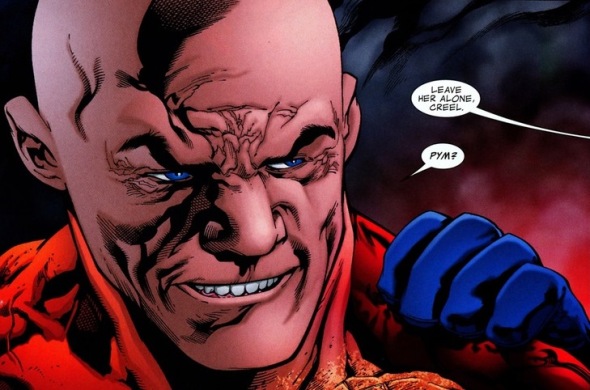 Plus, he commands a young army of superpowered recruits: 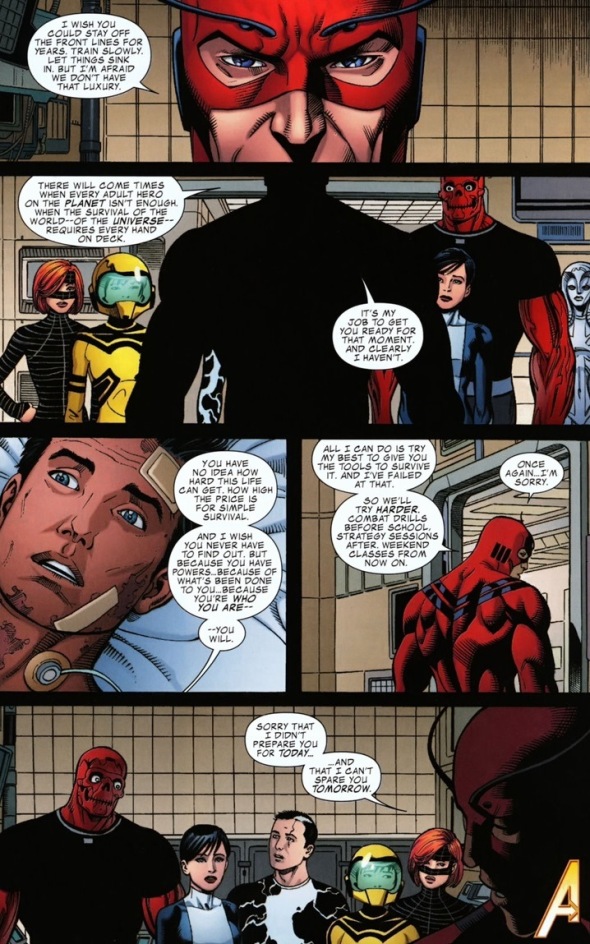 Unfortunately, every badass moment drowns in Pym’s sea of self-hatred and overwhelming regret. Personally, I like the re-characterization of Pym as a powerful superhero struggling with powerless issues.  Just understand that he wears his tear-stained heart on his sleeve.  Luckily for our protagonist, every gallant move Pym makes to train these kids receives notice by his furry co-teacher. 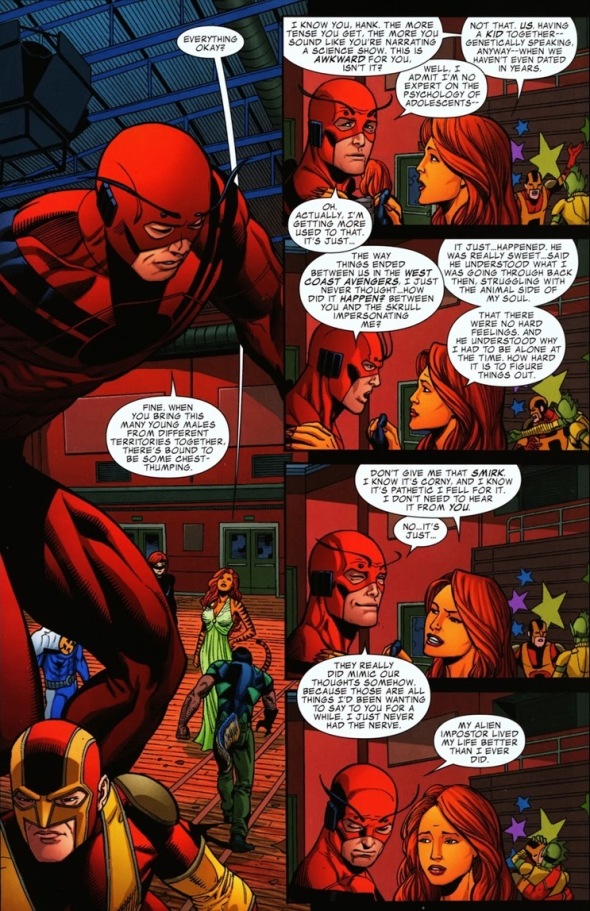 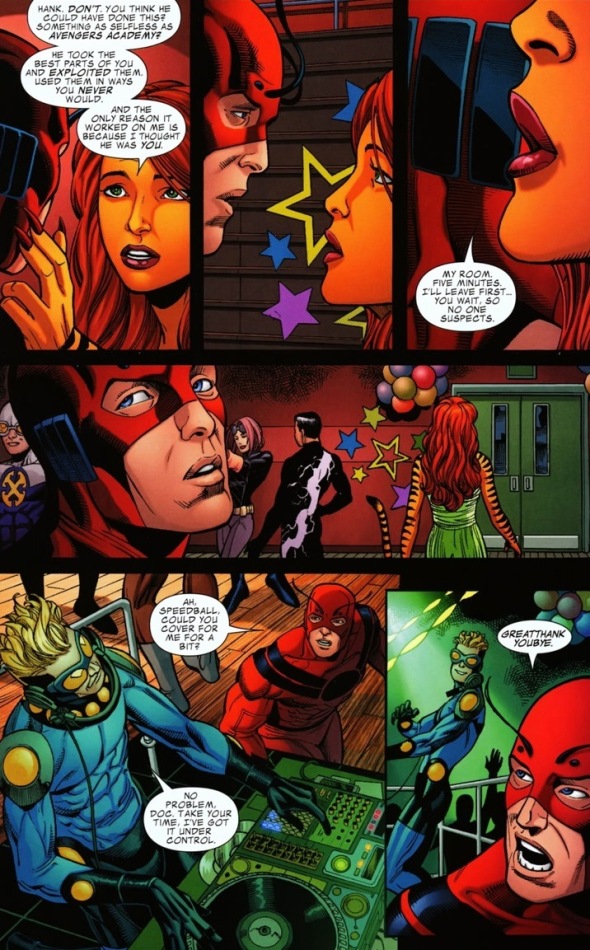 One major benefit of this hook-up: both characters finally chow down on a slice of happiness pie that has been sorely lacking from both their lives the past year or so.  Even now, Giant Man continues to mourn his ex-wife and Tigra remains psychologically ruined from the Hood’s brutal torture.  If Daredevil swung through the window to join them in their moment of passion, Marvel’s sadness triumvirate could be healed all at once.

For all the fight scenes and teenage drama in Avengers Academy, you’ll have to buy the series.  But I plead to my fellow comic book readers: you can still hate Pym, but please forgive him.  This man has been on an apology-palooza tour for three decades straight.

The best I can do is show you Pym’s genuine maturity and growth.  As the series hits its unfortunate conclusion, his confidence and leadership soar — something embarrassingly and frustratingly lacking from the former superhero before then.

Awesome, right?  That’s Captain America-level inspiration going on.  Plus, once he starts to forgive himself, his relationship with Tigra can progress to its appropriate and mushy place.

No more, I’m afraid.  Until these two pop up again as regulars in a new series, I’ll accept this as a well-deserved happy ending.