Sabretooth would be way more fun to hang out with than Wolverine.  Sure, Sabretooth (Victor Creed) oozes full-on psychopath, but at least he smiles once in a while.  Wolverine (Logan) spends most of his time brooding and drunk — who also by the way, currently stands as the moral center of the X-Men in Marvel comics nowadays.  We continue our story from Wolverine #13-19, volume 3, written by Greg Rucka and drawn by Darick Robertson.  As we left off, a shady corporation kidnapped Wolverine’s feral girlfriend Native; our hero and his new sidekick Sabretooth head out to rescue her/murder a shady corporation.

By the way, remember the passionate off-panel love making in the previous article?  This is how dirty she was:

For someone with heightened senses, Wolverine certainly doesn’t seem picky about his lovers.

From a story point perspective, Sabretooth’s desire for revenge isn’t well backed up.  The businessmen may have cut him out of the deal to capture Native, but that’s not enough motivation for him to drive cross country and frantically wave his claws.  So, turns out the shady corporation made even eviler plans.

I never understood why bad guys would betray fellow bad guys.  Especially baddies with healing factors and a vengeful streak.  I mean, if a group of people betrays Spider-Man, he’ll throw a few punches and send them to jail.  But Sabretooth-level supervillains?  Someone’s going to get disemboweled.  On a more important note, why all this hoopla about kidnapping the wolf-girl?  How about both an explanation and a surprise?

Turns out Wolverine also has super sperm.  Basically, the shady corporation figures if they strap down Native once a month or so, they can extract the eggs and grow a bunch of Wolverines.  And what despot or crimelord wouldn’t pay top dollar for their very own Wolverine?

Anyway, the team up between Logan and his arch-nemesis comes to a screeching halt (it’s a pun): 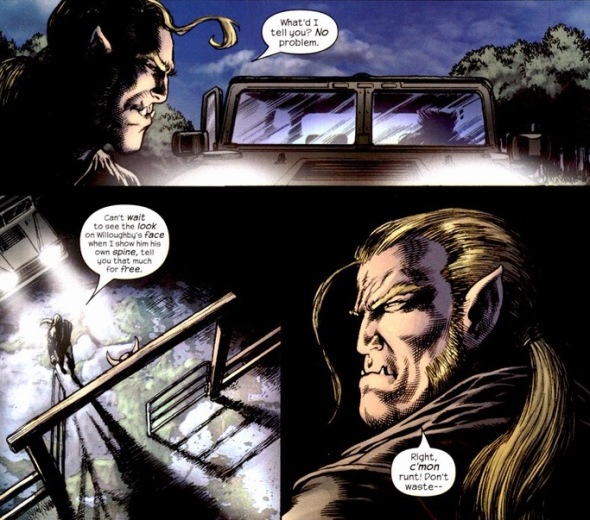 See why Sabretooth would be more fun to hang out with?  As you can imagine, Wolverine’s plan is fairly straightforward.  Slash, jump, slash, repeat.  Not a complicated superhero.

I just realized that without the next page, Wolverine sounds like he’s about to, er, terminate the pregnancy.  Instead, he’s taking out the radiation pill that hinders her healing factor.  I aim to be non-controversial.

And on the other side of the base?

Exactly how much does he hate his former employers?  He spites them more than Wolverine, who left him braindead while being pinned under a car.  That sort of hatred runs deep.  Unfortunately for our protagonist, Sabretooth doesn’t like to leave business unfinished, such as say that whole Native problem.  Supervillain obligations, y’know?

I present to you a page of bliss, with the only time Logan seems content the whole arc: 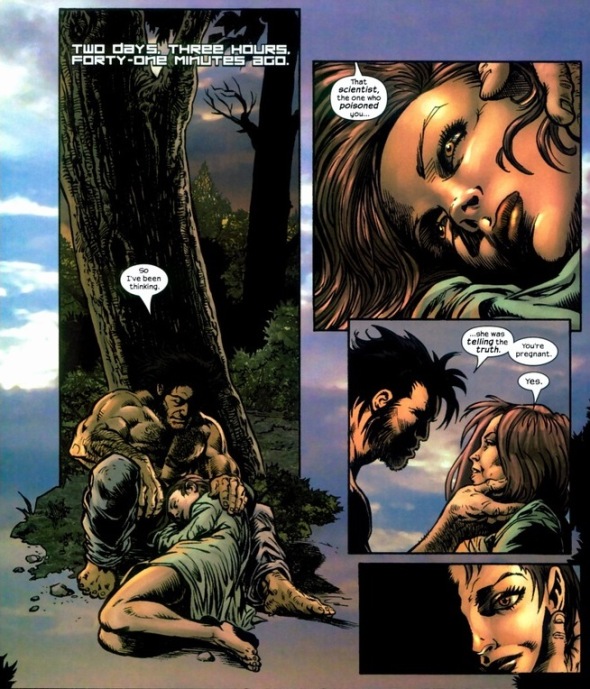 Y’see, Wolverine still has enemies.  Tons of enemies.  So to protect Native’s and his unborn child, he’ll ship her up to Professor X’s school where the world’s most powerful telepath resides.  And the next moment everything goes wrong, because Wolverine has horrific luck with happiness. 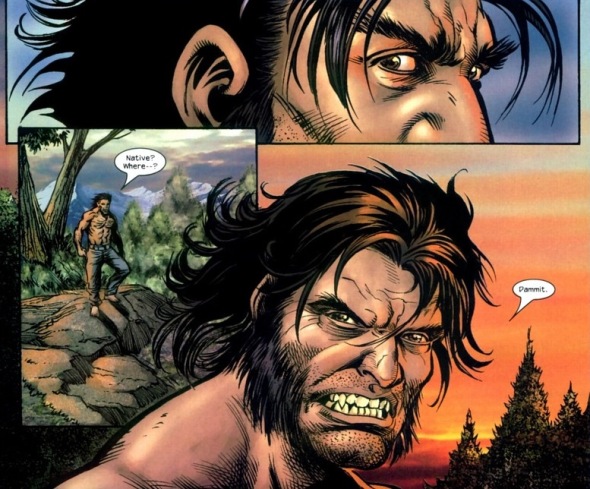 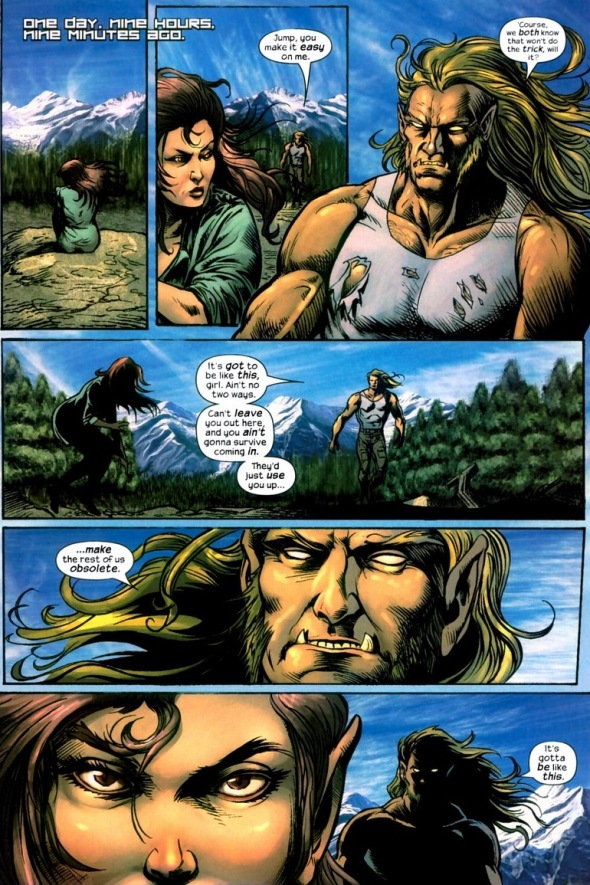 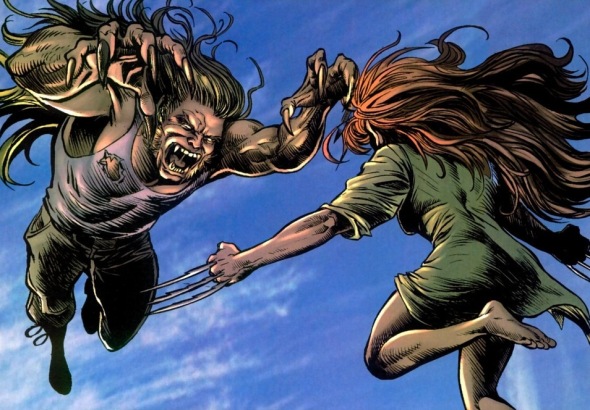 His reasons for killing her do make sort of sense.  I mean, they’re selfish and evil, but his points are valid.  Sabretooth knows she’ll eventually get recaptured and once again have her reproductive goodies sucked out.  Comic books tend to repeat themselves every few years.  With an army of obedient Wolverines on the market, Sabretooth won’t be able to make his living as an actual for-hire Wolverine. Well, that and to spite his arch-nemesis.  Sabretooth hates Wolverine and competition equally.

Maybe Wolverine has valid reasons for always being grumpy. 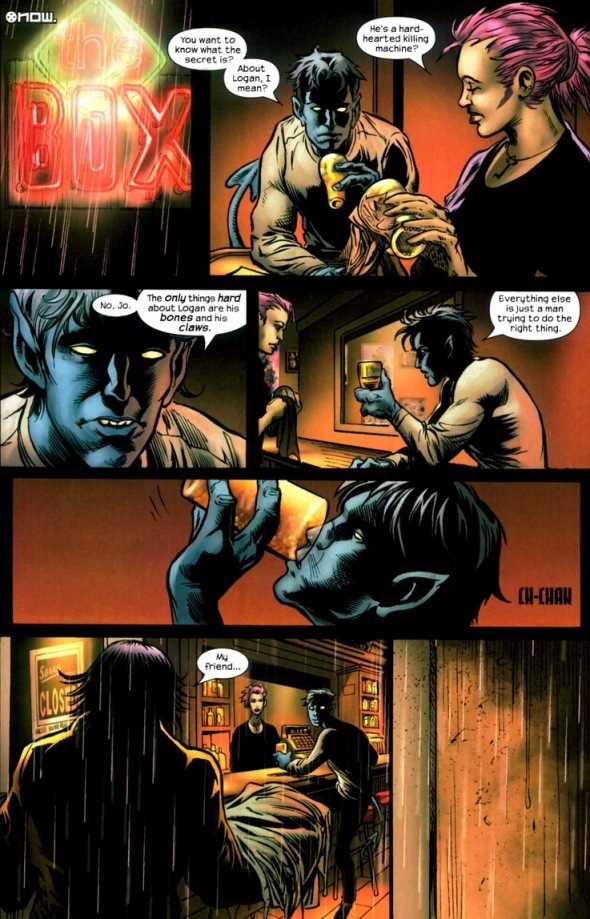 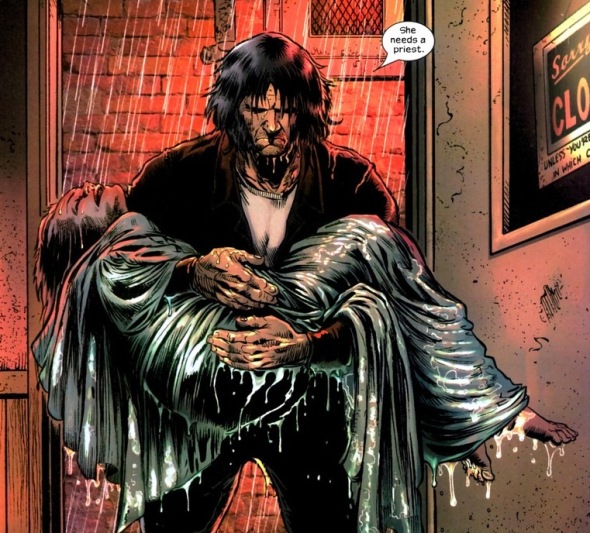 By the way, I cut out two Wolverine vs. Sabretooth fights, Logan’s inner man or animal struggle, Wolverine and Native bonding, tons of bad guy characterization, and so much more. It’s well worth your time to go pick up this book.

Now wipe your tears off the keyboard.  Next time, we’ll do something happy, I promise.