Disclaimer before I start.  I usually avoid large amounts of pages in succession from the issues I choose mainly because I don’t understand copyright and fair use laws.  But today, I’m picking about fifteen pages or so that are basically two groups of seven or eight in a row.  If Marvel or Rick Remender or anyone associated aren’t okay with this, I’ll take it down.  But truthfully, this story needs to be shared.  It’s so good, so beautiful, and so important for the characterization of Daken and Wolverine. And now, you the reader, will promise to go and buy tons of Remender’s Marvel comics.  Maybe all of his Uncanny X-Force run?  Amazon.com always has discounts, y’know.

If you read the last article, Daken barely escaped the explosion he set off in Times Square.  Even though he was badly wounded and only weeks to live, he got better.  I don’t know how, but I’m sure his supervillain connections include some evil braniacs as well.  Because in Uncanny X-Force #33-34 (the exciting conclusion of the ten-part Final Execution arc), written by Remender and drawn by Phil Noto, Daken and Wolverine’s six-year antagonism ends.  For real this time.

As you read today, remember that even when Daken first premiered in Wolverine: Origins #5, written by Daniel Way and drawn by Steve Dillon, his motivations have never changed:

We pick up with Wolverine awakening from a dream and strapped to a chair in some sort of interrogation room after being captured by the reformed Brotherhood of Evil.  Like most of us do. 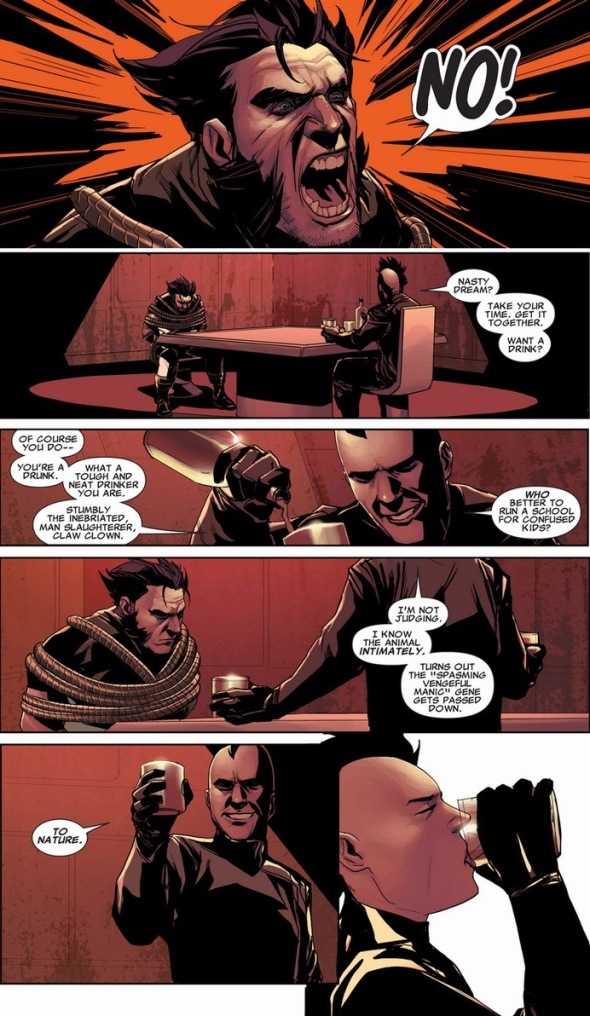 Daken and Wolverine both sort of argue the same point.  Daken believes by staying true to his Wolverine-y genetics, he’s acting appropriately to his own nature.  Why change his own predestined course?  But Wolverine also sort of believes the same thing, just with using their powers and attitude for the greater good.  Like a bullet, the damage comes with who it’s being fired at, not the kind of gun being fired. 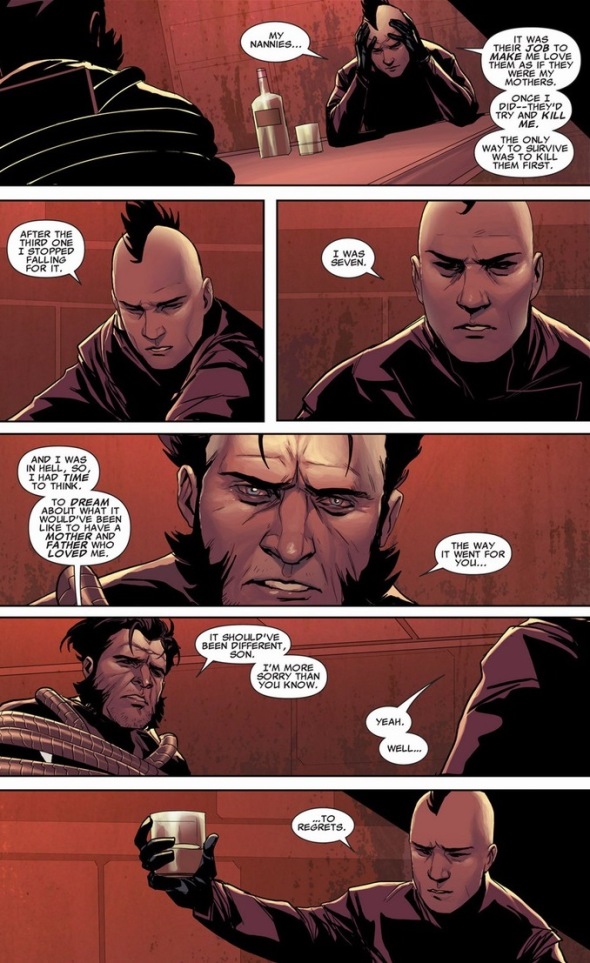 I love this scene.  Both Daken and Wolverine genuinely apologize at how Daken’s life turned out, but Daken accepted his twisted path long ago.  And now, after a dozen battles or so, the game has to come a close.  One winner, one loser — with Daken planning to emerge victorious. 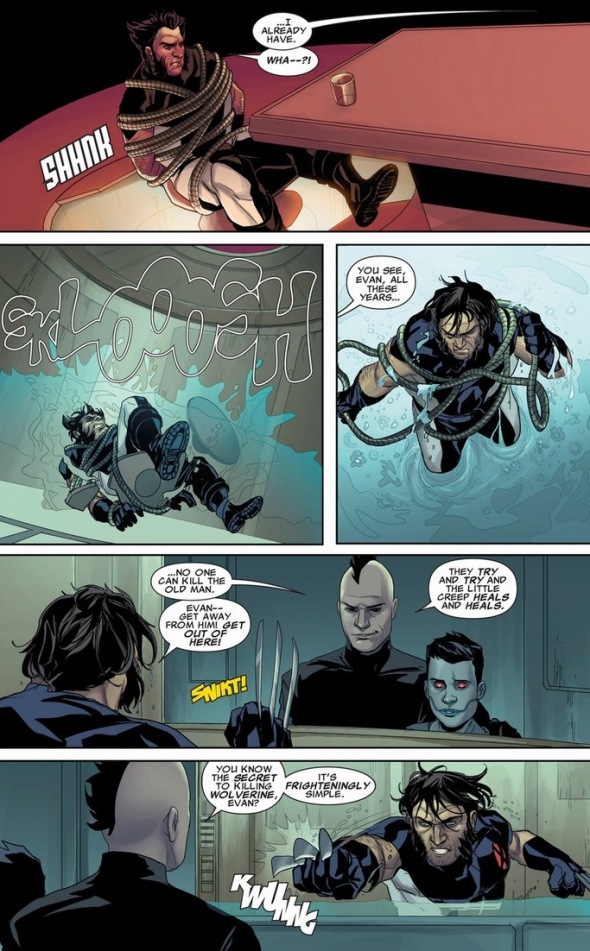 You can read the book for how Wolverine escapes and everything that leads up to the next issue. Finally the two settle their differences claw-to-claw, but you knew that’s how this has to go. 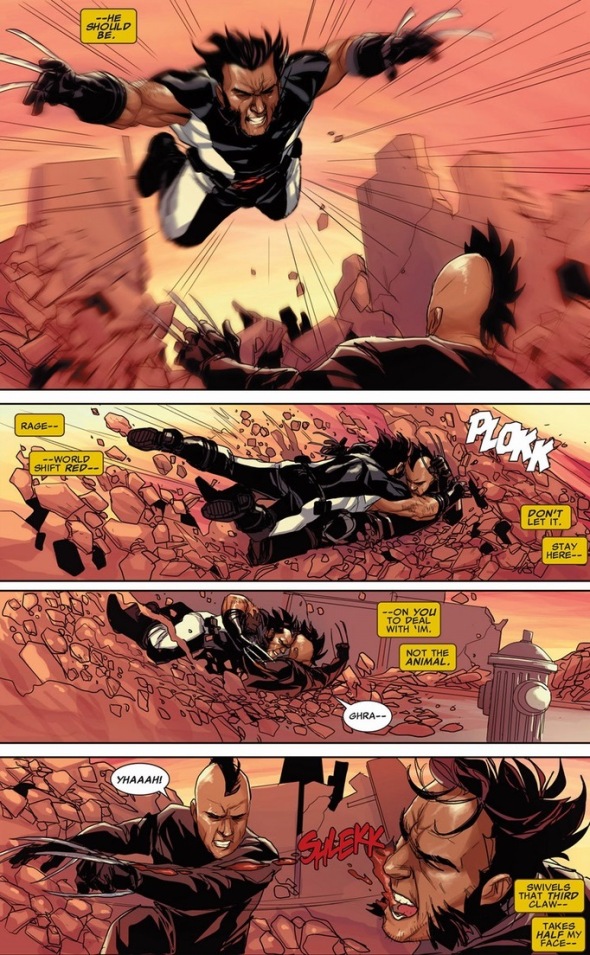 See what’s going on?  Wolverine would gain a clear advantage by going into his “berserker” state, where he loses control and flails way more dangerously and frighteningly than his normal mood. Daken definitely tapped into his berserker mode as soon as the fight began.

Now we get Wolverine’s clear humanity versus Daken’s primal animalism — the struggle that has haunted Wolverine in comics for decades. 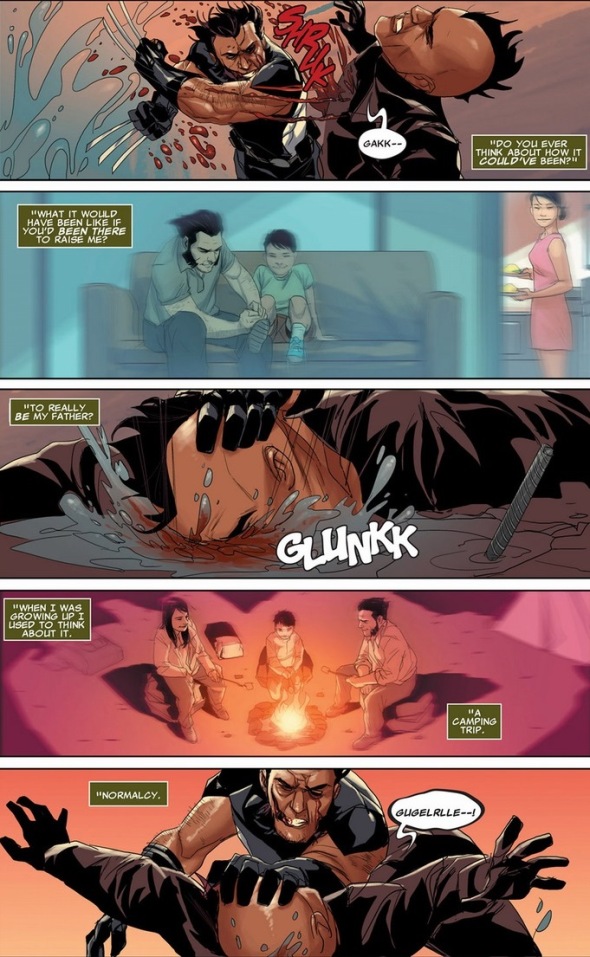 It’s heartbreaking.  The reality of their horrific fighting gets mixed with the what-if idealism of a happy, meaningful life.  While not exactly Wolverine’s fault that Daken ended up the way he did, if he had just known, if he had just searched harder, if he had just reached out, and so on, then maybe Daken’s life could have been the normal, joyful life that children deserve.  Or not.  But it doesn’t matter now. 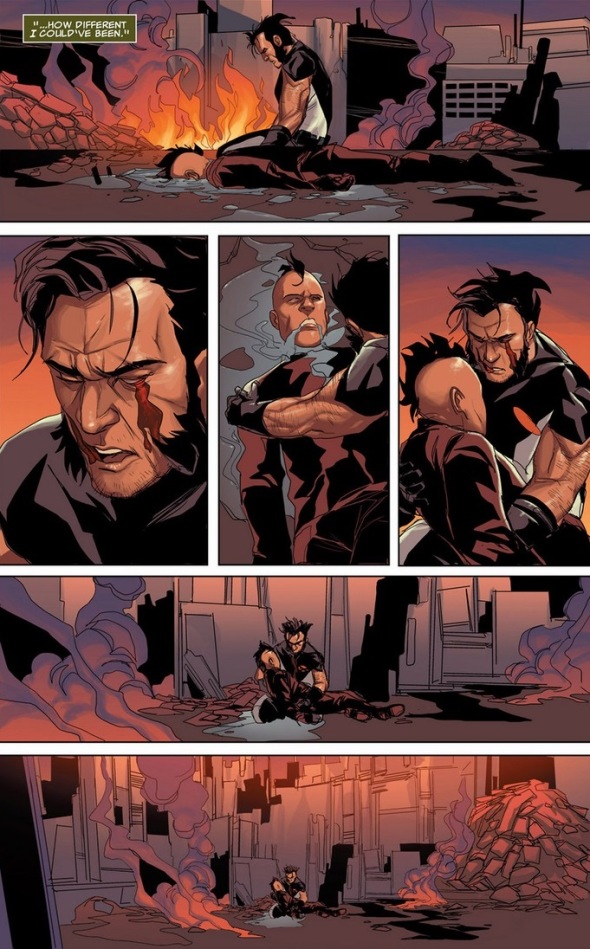 No better analogy for their struggle than for Daken to drown in a small puddle.  Daken hasn’t shown up in comics since; he’s really dead.  Wipe those tears away.

Before I end, there’s one final thing I want to show you.  Five issues before this in Uncanny X-Force #29, the team has been transported to an alternative post-apocalyptic future.  There, as they say goodbye, Wolverine receives parting words from his future self. 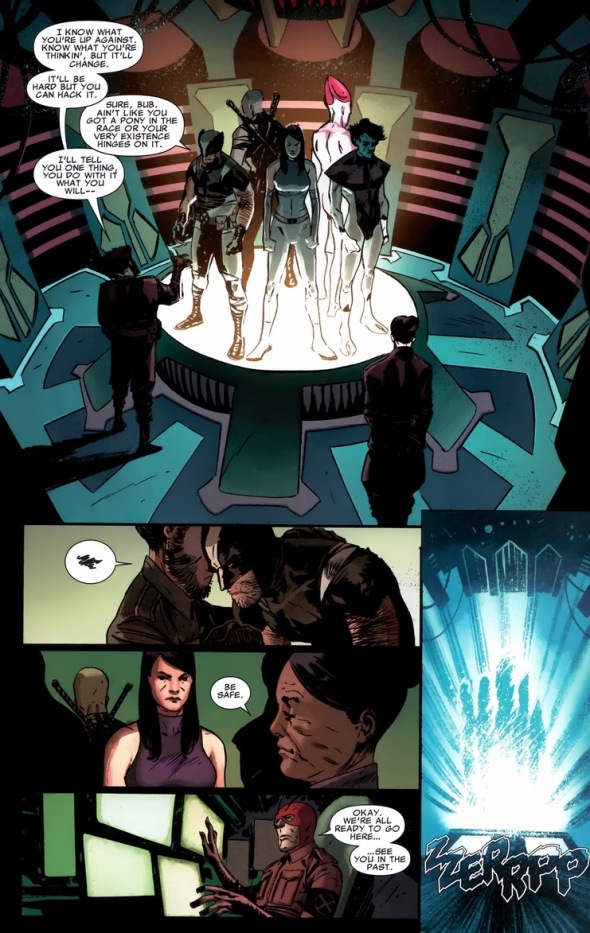 When the series ends in Uncanny X-Force #35, the whisper gets revealed to the reader:

This means that the entire series of pages I showed you above, Wolverine knew he had to kill Daken. If he didn’t, all the innocent students at his school would die.  No other choice.  Go back and read their conversation and you’ll notice the sad resignation in Wolverine’s choice of words.  Wipe away those tears once more.

Every time Wolverine’s grumpy and drunk, know that at least he has a good reason.