Spider-Man and the never-ending guilt trip

It’s been a while since our last Spider-Man article, and I’m here to fill that void in your heart.  Y’see, if you’ve been following Superior Spider-Man, last issue Peter Parker met his defeat at the hand of guilt revelation.  I know that doesn’t make a lot of sense if you’re not caught up, but as fans cried out (as they do every single time the status quo gets changed), writer Dan Slott made a solid point: Spider-Man simply never forgives himself for any mistake or decision he makes.  Ever.  Rinse and repeat for fifty years.  And to be fair, that level of morality is impossible — we as people make selfish choices all the time, regardless of how small or unimportant.  Unfortunately, Spider-Man goes down a spiral of self-loathing the moment his mind is made up.

Well, get ready for a sadness punch in your tear ducts.  Today in Spectacular Spider-Man #22, written by Paul Jenkins and drawn by Talent Caldwell, Spider-Man receives some permanent emotional damage.  And speaking of emotional damage, let me quickly tell you about Mindworm.  You almost certainly haven’t heard of him.

He first appeared in Amazing Spider-Man #138, written by Gerry Conway and drawn by Ross Andru. Mindworm’s a mutant with the power to influence the emotions of others, even able to project illusions and other vague stuff.  Also, wearing a striped tanktop as your supervillain costume pretty much guarantees insignificance.  Here’s Spider-Man taking him down in their first encounter: 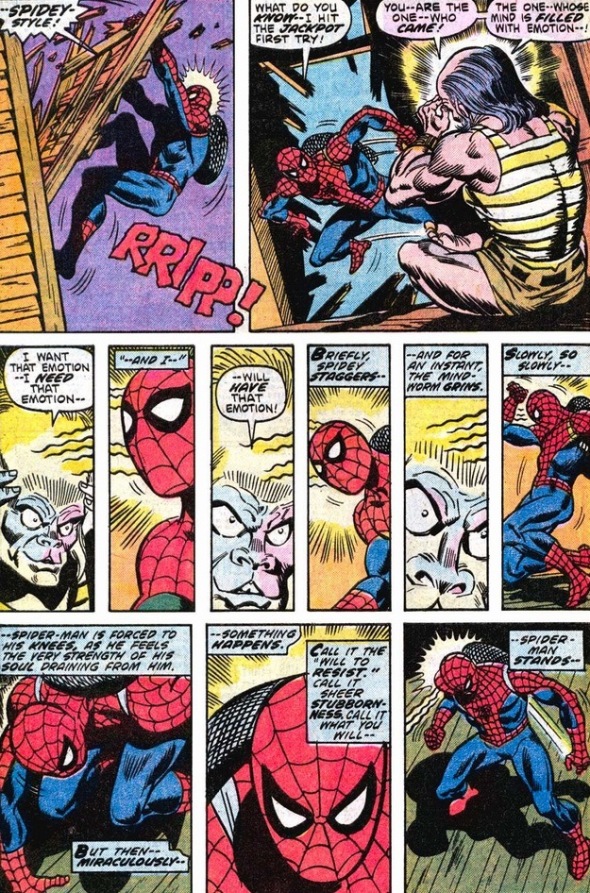 As we fast forward 30ish years of comics, Parker notices a weird section of town where everyone seems influenced by a heavy mood of hostility.  You know where this is going? 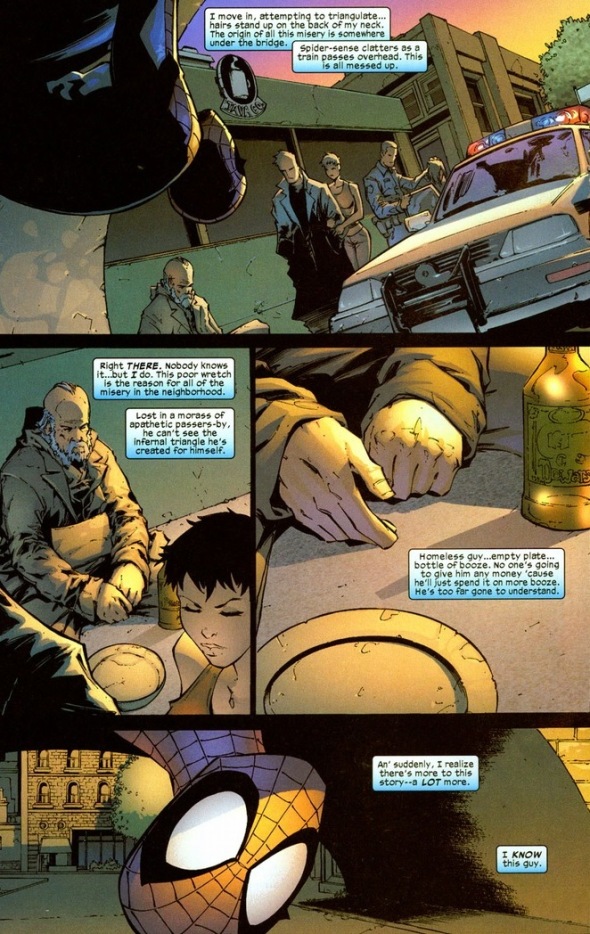 The years haven’t been kind to Mindworm.  When we get deeper into the supervillain’s psyche, it’s a blast of mental illness and terrible life choices.  Unlike Moon Knight, Mindworm’s mental illness doesn’t have Wolverine yelling at him, instead just a projected wave of depression.  As Spider-Man recognizes this once proud man, he makes the most valid point against superheroism today: 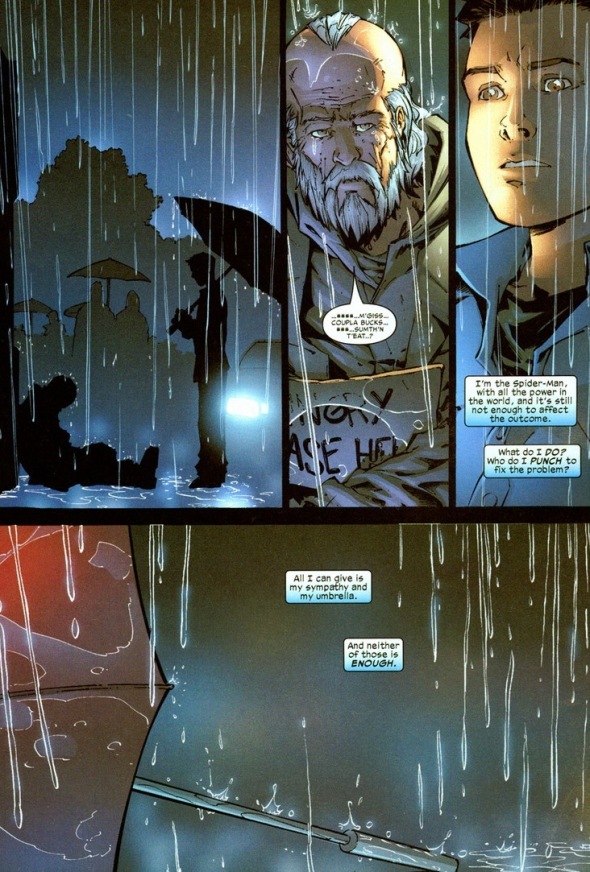 Let’s be fair.  Captain America inspires and reassures the Marvel universe, but at the end of the day, he does punch his way to victory.  And when the problem doesn’t involve megalomaniacs threatening cities with giant bombs, punching usually solves very little.  What’s Spider-Man to do that won’t turn this issue into an after school special?  Well, lots of guilt for one. 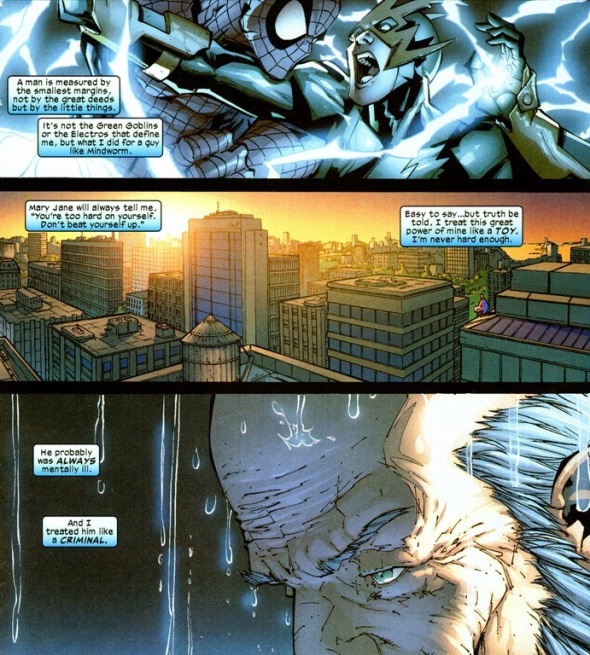 Both Aunt May and Spider-Man make solid arguments.  I mean, Spider-Man is a man with the proportionate strength of a spider, not Zeus.  No matter how fast he swings, he can’t save everyone — and the sooner Parker accepts that, the sooner he can actually find some contentment in his life.  On the other hand, Spider-Man has a duty to help those who can’t help themselves.  When you receive awesome superpowers, you then have to devote your life to protecting those without.  That’s kind of how the deal works.  Unfortunately, things get worse. 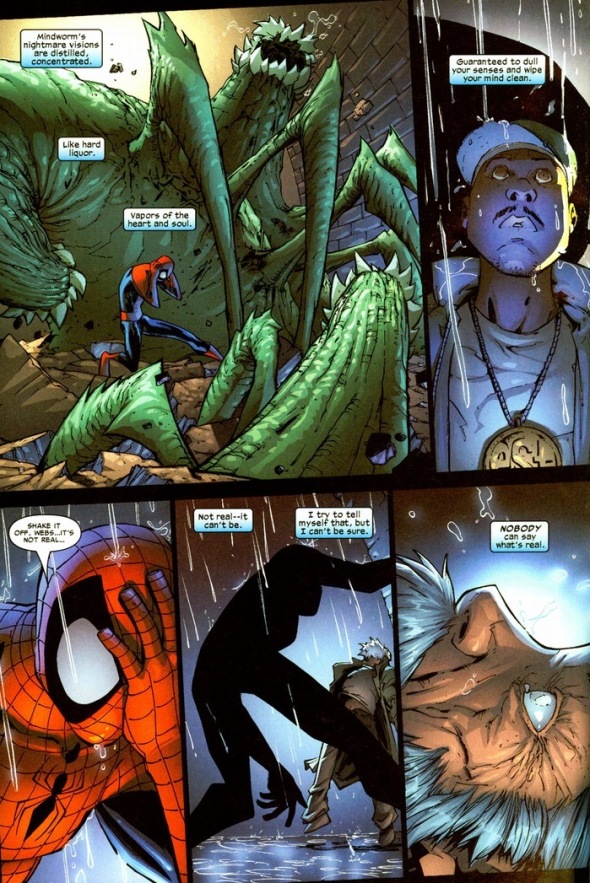 Look, I love Spider-Man with all my heart, but he is a man in pajamas webbing around a city that’s 300 square miles.  The fact he could even arrive at the scene of a crime even remotely on time speaks volumes in itself.  Now, stuck in a situation far beyond any punching could solve, all he can do is react accordingly.

I hate to mention this, but Spider-Man loses fights far more than you think.  Sometimes he falls with a roundhouse kick to the face, but other times, the baddie claimed victory before Spider-Man even steps in the ring.  Does Mindworm deserve this ending?  God, no.  Does Spider-Man deserve to have this freak accident on his conscience?  Absolutely not.  But he will, and it breaks our hearts.

You know why Spider-Man remains the most popular Marvel character year after year?  He’s portrayed as a normal guy like us, but truthfully, he’s our better: physically, mentally, and emotionally — a literary role model for us to emulate.  Or maybe it’s the quips.  One of those two reasons.

One Comment on “Spider-Man and the never-ending guilt trip”