← Superheroes and Judaism, Pt. 2
Batman Beyond vs. Justice League →

I was reading All-New X-Men #13, written by Brian Michael Bendis and drawn by Stuart Immonen, and they were commenting on Havok’s controversial speech from Uncanny Avengers #5 a few months back.  Remember this speech?

When that happened, Anthony Jocko asked my opinion about it.  I answered:

“I read the issue and I read the outcry, and if I’m right, basically people are mad that Havok rejects his identity as a minority?  Fans are mad because the X-Men are supposed to represent the ‘minority’ — whether that’s by religion, race, sexual orientation, interest, etc. — and Havok states that we should assimilate instead of celebrate diversity?  Y’know, I didn’t actually think about this until now, but I think the outrage’s overblown.

I get how comic book fans might be bullied or ridiculed, and the X-Men are that fantasy of staying true to the fans’ passions just with laser eyes or wings or whatever to defend themselves.  I mean, I’m Jewish, and we have a whole history of being hated on as the minority scapegoat, but I’d rather see the X-Men defeat bad guys than rise up as a minority power.  As in, aren’t they superheroes first and mutants second?

Especially after AvX, the X-Men are seen as villains.  So, Havok merely stated that the mutant community should be seen as working with the other heroes instead of against them.  Superheroes first, mutants second — and simply that by calling them mutants, their heroism and good intentions are being sidelined by a pre-judged ‘label.’  I agree with [writer Rick] Remender, but I also tend to be a suck up.”

And I stick with my argument.  Until All-New X-Men #13 came out this week and I read these pages: 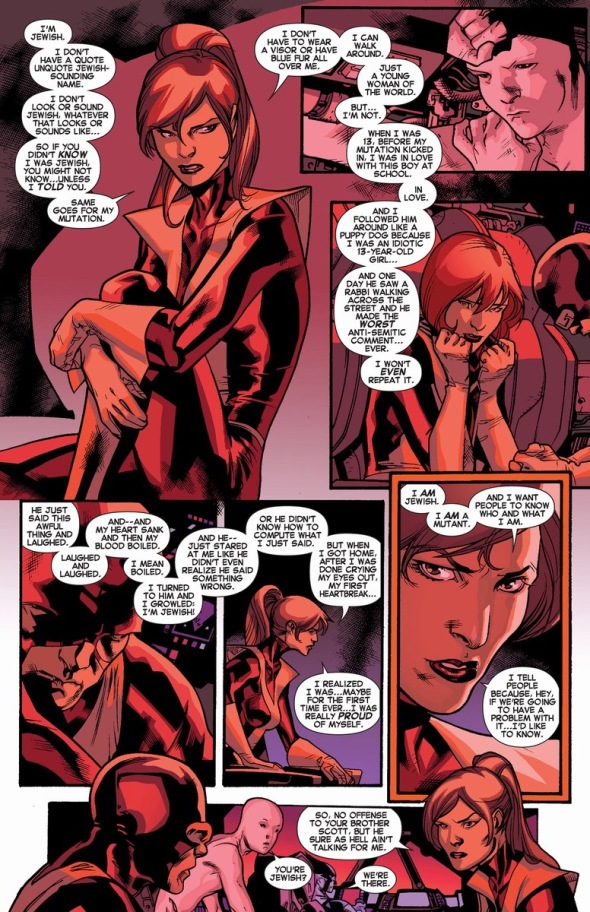 Kitty’s right.  Bendis is right.  Now, I did just spend two weeks in Israel, so understand where my bias lays right now.  Havok should embrace both his title as a mutant and a superhero, because while we can’t choose our nationality or superpowers, we sure as hell can be proud of our special identity. That’s the basis for a community and a people.  C’mon, “I am a mutant, and what are you going to do about it?”

So Kitty’s speech had me thinking — who are the other Jewish superheroes?  And more importantly, I should celebrate them!  Fictional sure, but they’re still part of Judaism’s culture and history.  I’m going to share some of them with you over the next few days.

I highly encourage you to look into the superheroes and supervillains of your own religion, whether that be Catholic (Daredevil, Nightcrawler), Muslim (Janissary, Dust), Atheist (Hank Pym, Mr. Terrific), etc. But since I’m Jewish — well, that’s what my focus’ll be on.

We’ve already mentioned her, so let’s start with Kitty Pryde.

She premiered in 1980 as a child.  Like the day after puberty kicked in.  So with the shifting timeline of the Marvel Universe, she’s probably in her mid-20s right now, and one could argue that she may be the biggest success of Professor X’s school.  And I’ve always admired her unabashedly shameless about her religion.  Like as in Ultimate Spider-Man #106, written by Bendis and drawn by Mark Bagley: 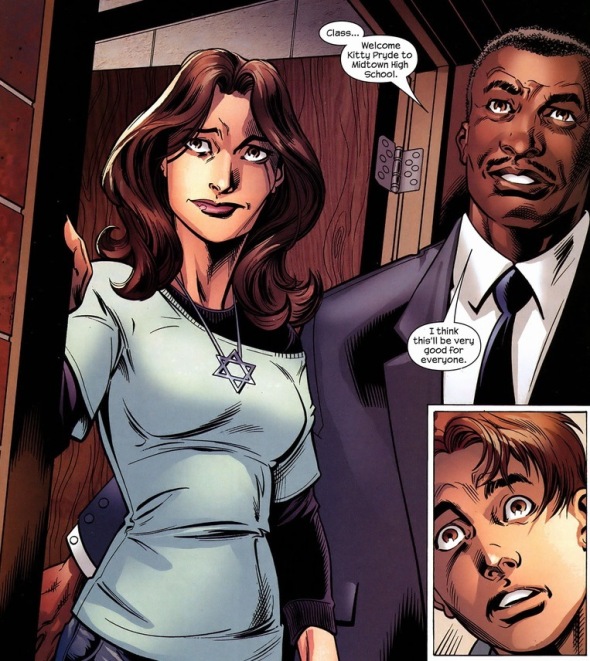 Before you dismiss that giant Star of David necklace as a mere accessory, know that it saved her life on more than one occasion.  Such as when she fought Dracula in Uncanny X-Men #159, written by Chris Claremont and drawn by Bill Sienkiewicz. 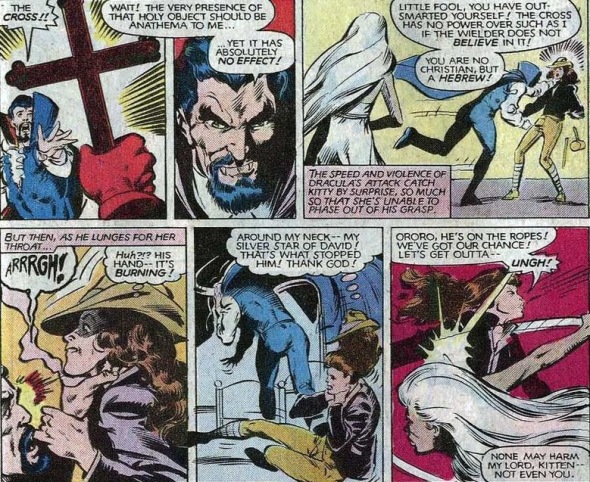 Let’s talk about Dracula for a second.  Of course a fictional universe filled with kids who fly and shoot fire from their hands would also be populated by other wacky fictional monsters.  Vampires, mummies, werewolves, etc. remain a big part of both DC and Marvel.  Frankenstein even received his own solo series for a while.  And why not?  Frankly, that doesn’t take away from the religious impact of some of these superheroes simply because they live in a sometimes silly world filled with weirdos.

Yes, the comic book world has Aztec zombie resurrections.  Occult magic spread throughout thousands of dimensions.  Space aliens with armadas that span solar systems.  Toxic waste that grants amazing superpowers.  So why not religion too?  If Dracula can pummel the X-Men, is Kitty being devoutly Jewish really that much more of a stretch?  Do we really have to suspend our disbelief about Nightcrawler being a Catholic priest when he’s also blue, furry, and can teleport?

Though no superhero has been more defined by Judaism than Magneto (maybe Sabra, but more on that later).  I’d like to be proud of him, but he does do a whole bunch of mass murdering.  Sadly, it took fifteen years before Magneto admitted his Holocaust roots, which now make up a major aspect of his character and personality.  In Uncanny X-Men #150, written by Claremont and drawn by Dave Cockrum, Josef Rubinstein, & Bob Wiacek, Magneto reveals the single most important detail of his youth:

And when he accidentally hurts Kitty a few pages later:

Kitty survives, of course, and the two become unlikely allies.  Bonded by their Judaism commonality and Magneto’s tendency to switch his morality every fifty issues or so, Kitty and Magneto attend a Holocaust memorial in Uncanny X-Men #199, written by Claremont and drawn by John Romita Jr. & Dan Green.  This remains one of the most significant comics regarding Magneto’s Jewish roots, and you can easily tell why:

Mystique attacks because superhero comics still require a punching quota, but it’s Magneto’s speech that does more for his character development than decades of battling the X-Men. 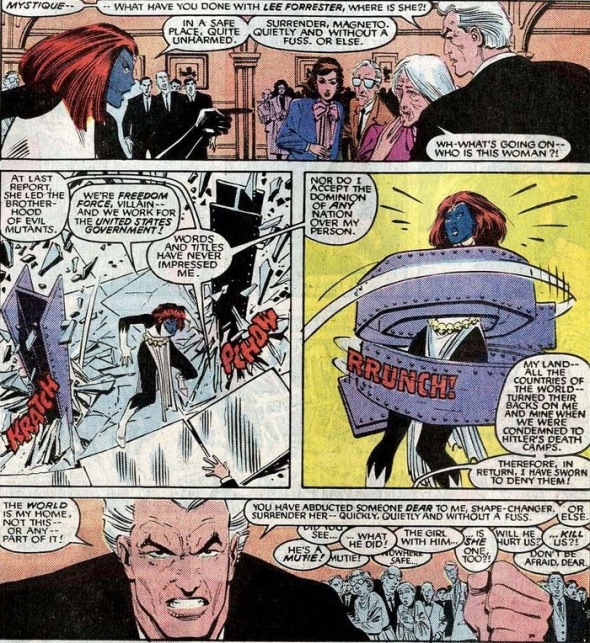 Magneto’s desire to see his own minority people (mutants) rule the world so they can no longer be persecuted or attacked makes a lot more sense when you realize he saw his own Jewish people massacred during his childhood.  Though his methods have seemed a bit like the Nazis at times, that’s a very different argument.

Nowadays, Magneto’s a bonafide superhero and I catalogued his redemption (which also involved Kitty) here and here.  Greg Pak wrote a spectacular miniseries titled X-Men: Magneto Testament which chronicles Magneto’s childhood in the Holocaust.  I’d write an article about it, but it’s not really a superhero comic.  Yes, Magneto’s the star, but not once does he wrap Nazis up in their own metal guns or lift Auschwitz off the earth and flip it over.  Still, as far as Holocaust comics go, it’s on par with Maus.

While I have about forty pictures and five superheroes left, I’m already kicking about a thousand words today.  Let’s do part two tomorrow and finish with part three on Wednesday.  You’re totally worth it.

6 Comments on “Superheroes and Judaism, Pt. 1”