When you take a look behind the curtain, Jewish writers and artists litter the comic book landscape. And my goodness, am I proud of my people.  Stan Lee is Jewish.  Jack Kirby was Jewish.   Neil Gaiman is Jewish.  Batman’s creators Bob Kane and Bill Finger were both Jewish.  Superman’s creators Jerry Siegel and Joe Shuster were also both Jewish.  I’m just saying it’s hard to be anti-Semitic and love superheroes at the same time.

We finish off today with Sabra, the Israeli superhero that’s drenched in Jewish paraphernalia, and Thing, that wonderful orange rock monster from the Fantastic Four.

Let’s talk about Sabra.  No one’s arguing about her religious affiliation, right from her first appearance: 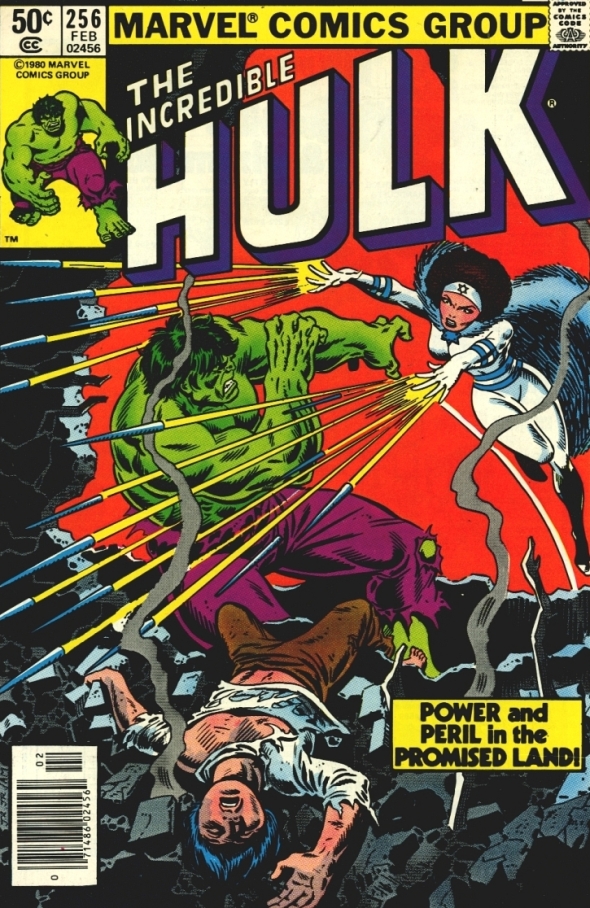 Real name Ruth Bat-Seraph, she developed mutant powers that gave her all those standard superhuman traits plus she can transfer life energy into another person or something.  I guess like a temporary healing/enhancing power.  And as you noticed from the issue cover above, she uses all that cool Israeli technology as well.

I want to explore a few scenes from New Warriors #58-59, written by Evan Skolnick and drawn by Patrick Zircher.  An Arab superhero tries to assassinate the Israeli prime minister.  You can imagine how that turns out. 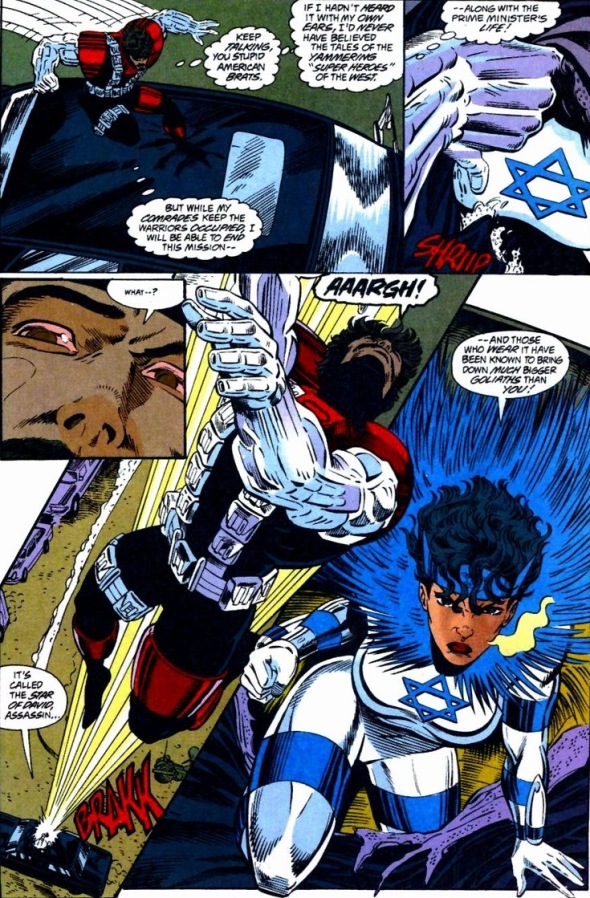 What begins involves a whole Israel-Palestinian argument between the two enemies.  The poor New Warriors just want to bash in bad guys, but now that have to deal with a problem never discussed in superhero training camp: politics.  I believe the purpose of this story actually serves to further the character development of the telekinetic superhero Justice, who also happens to be Jewish.  Sabra’s not in the New Warriors, after all. 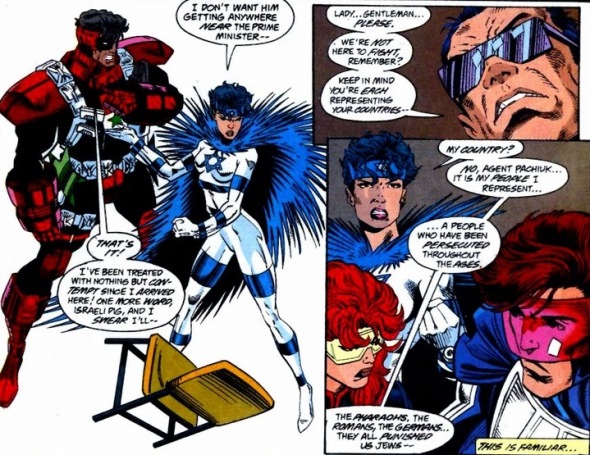 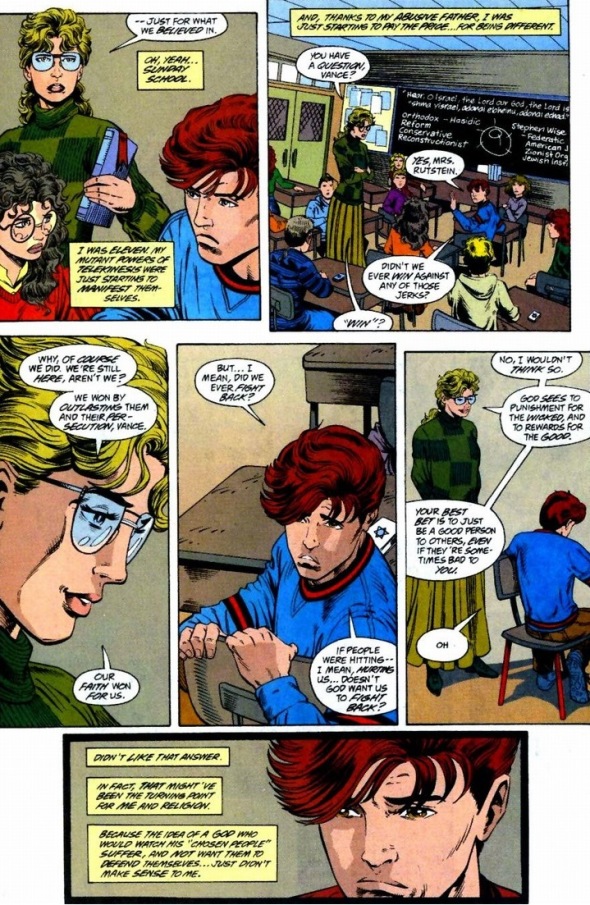 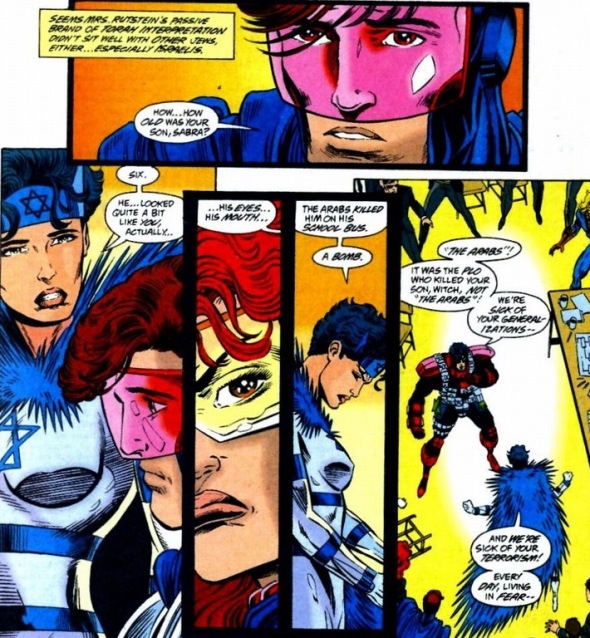 By the way, notice the answer Justice’s teacher gave?  That’s the exact same answer Moon Knight’s rabbi father told him.  And truthfully, the Jews tended to be a fairly passive people until the Israelis came along anyway.  Now the Jews have a whole country full of Sabras.  So as the peace conference between Israel and Palestine goes inevitably bad, Sabra gets brainwashed.  Only Justice can snap her out of it, in what may be one of the most powerful moments for me in comics. 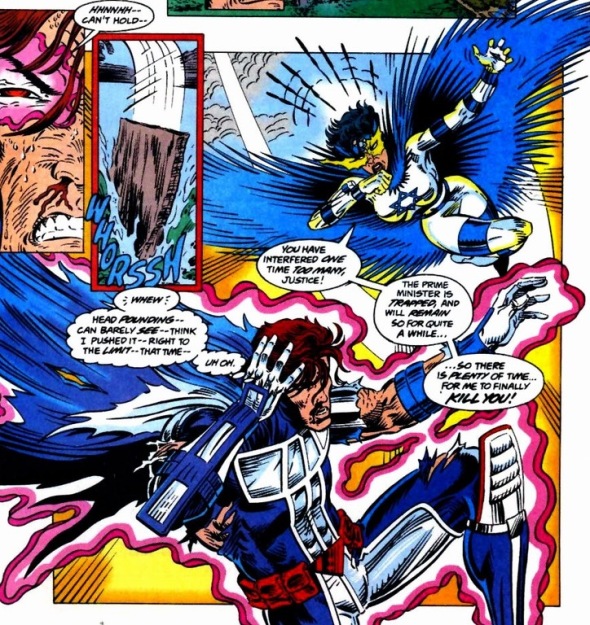 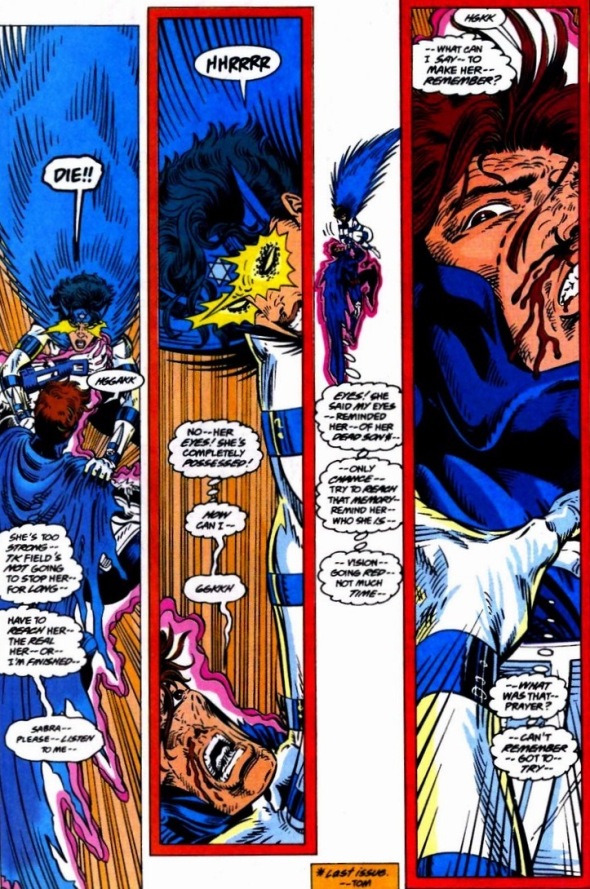 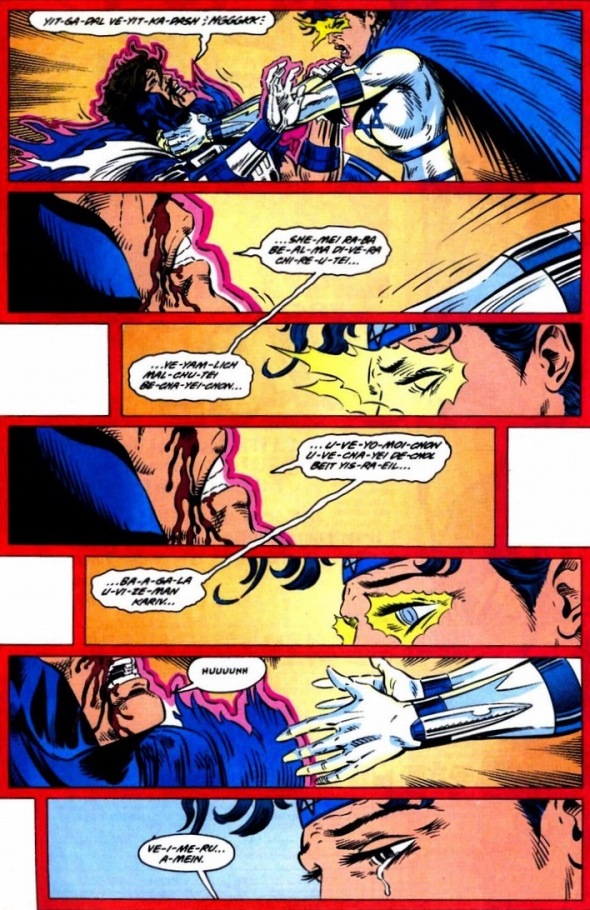 As a Jew, my heart melts. 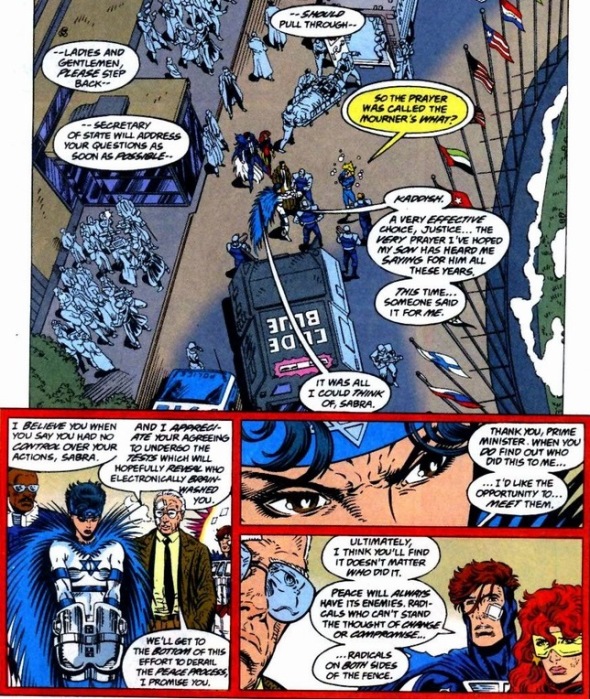 Politics aside, Sabra still shows up whenever an Israeli superhero is needed.  Recently (and in her modern costume), she served on Spider-Man’s ragtag team of superheroes to take down Doctor Octopus’ world-dominating plan.  Yes, Peter Parker would have used the Avengers and his A-list friends, but brainwashing gets used as a writing tool far more often than you think.  Here’s Sabra’s brief moment from the Amazing Spider-Man: Ends of the Earth one-shot, written by Rob Williams & Brian Clevinger and drawn by Thony Silas. 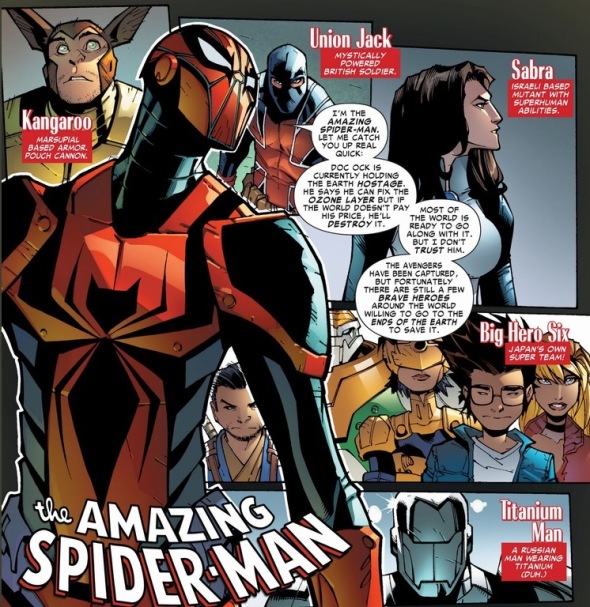 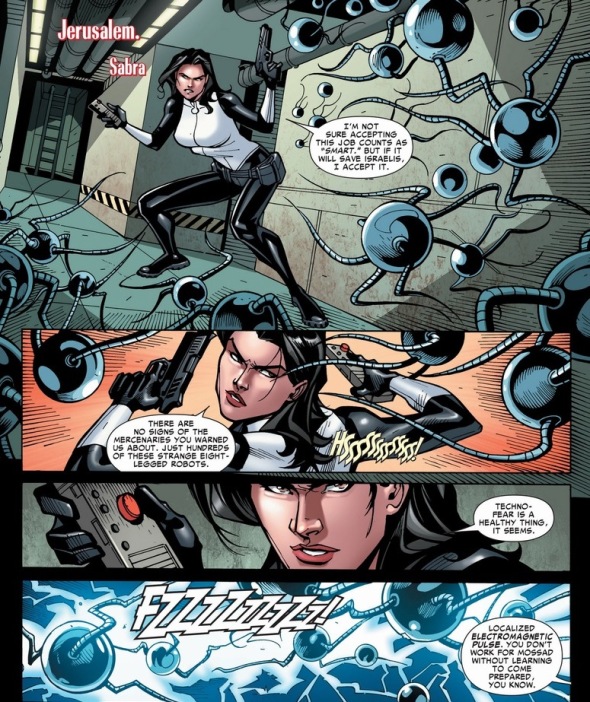 You know what makes a comic exciting?  Not knowing if these minor superheroes will survive the issue or not, especially since Marvel teased that to help the sell the issue.  And boy, heartbreak ensued.  Kangaroo: massacred.  Titanium Man: crushed.  Sadly, poor Sabra also drew a bad hand.: 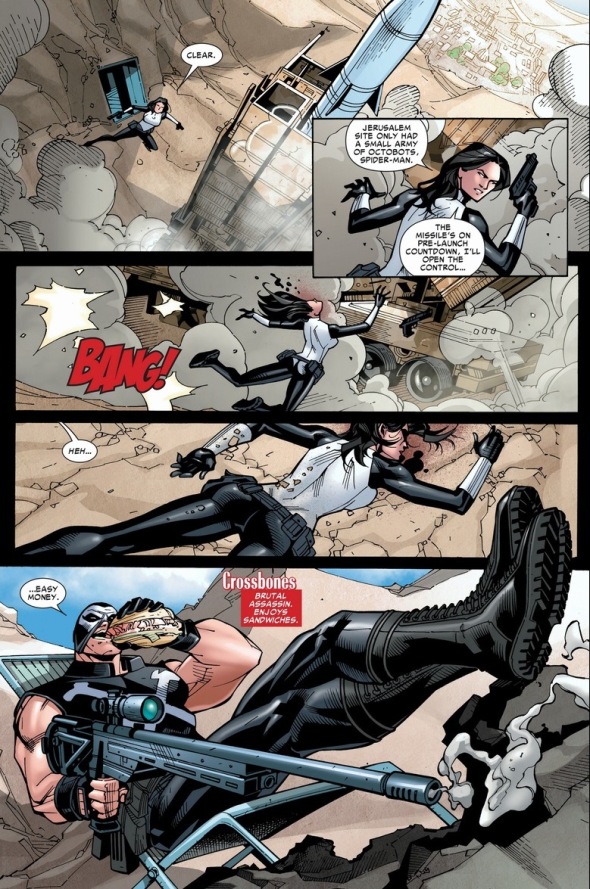 She’s not dead.  I say again, she totally survived.  How?  I don’t know, but a few months later in X-Men #31, written by Brian Wood and drawn by David Lopez, she shows up unharmed and ready for action. 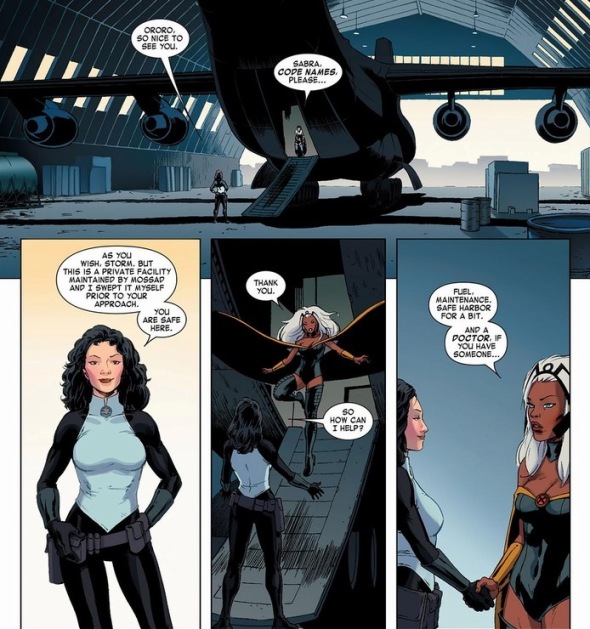 Still, even if Crossbones had splattered her brains all over the desert, the Hand or somebody would have brought her back to life a year or two later.  No one stays dead forever, except Spider-Man’s dear Uncle Ben.

One more superhero to go, and the Thing‘s totally my favorite Jewish superhero.  Even with the simplest superpower in the Fantastic Four, everything about him oozes a thin layer of tragedy.  He’s a rock monster, for goodness sake.  People treat him differently.  He can’t assimilate in normal society. And even the ladies who see past his exterior are always in danger from his enemies.  Yet he soldiers on, because that’s what superheroes do, gosh darn it.

In Fantastic Four #485, written by Karl Kessel and drawn by Stuart Immonen, his Jewish roots shape an entire story.  Back in one of my earliest articles, I covered the Thing’s bar mitzvah, but that’s a much later issue.  So in his youth, Ben Grimm became quite a street thug before going on that fateful space ship ride. 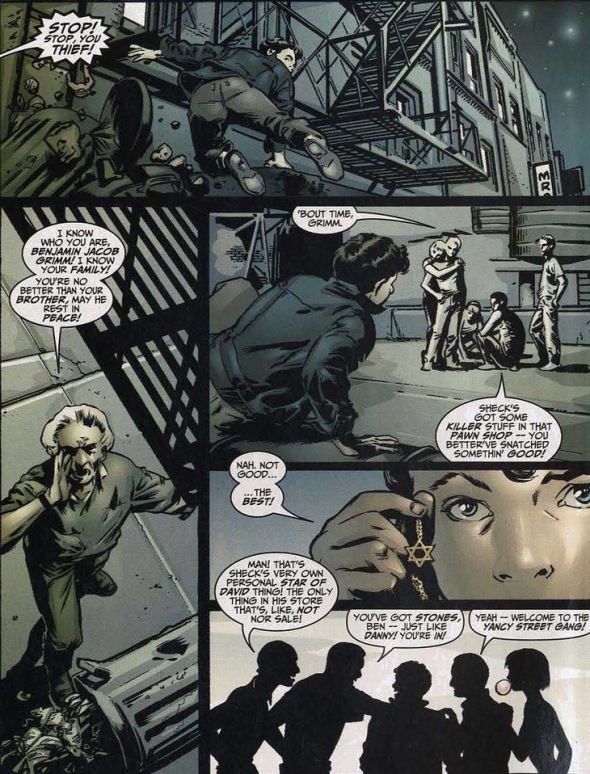 With some brief rest before jumping back into the microverse or hurtling across time, the Thing figures he should check up on his roots and make some amends. 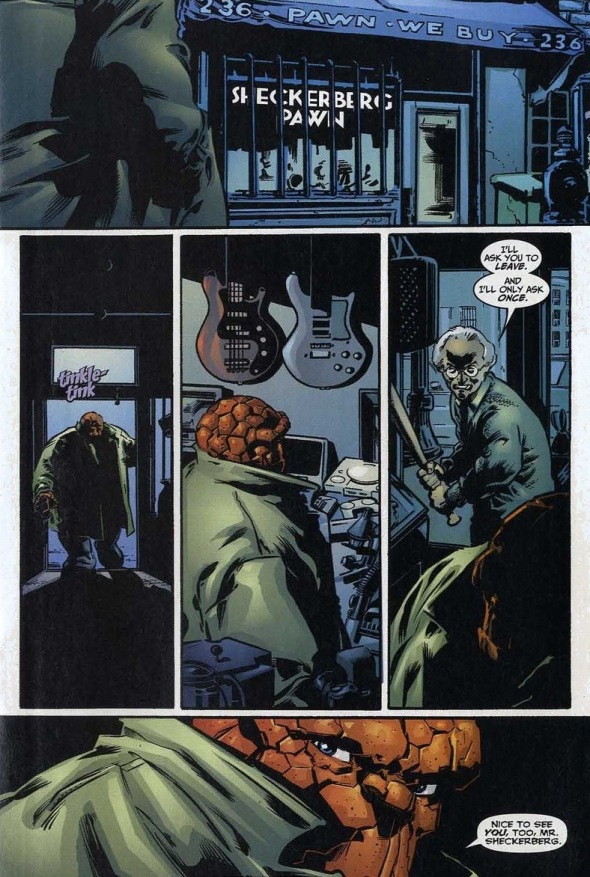 As you know, any down time in the superhero world must be interrupted by a fistfight.  The Thing has his a few pages in. 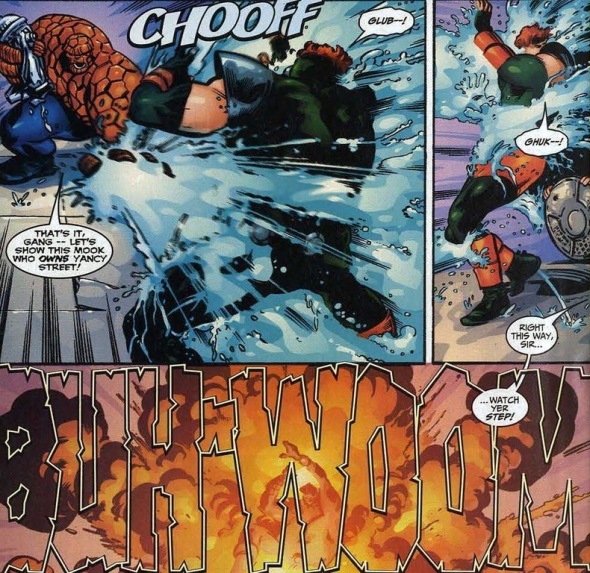 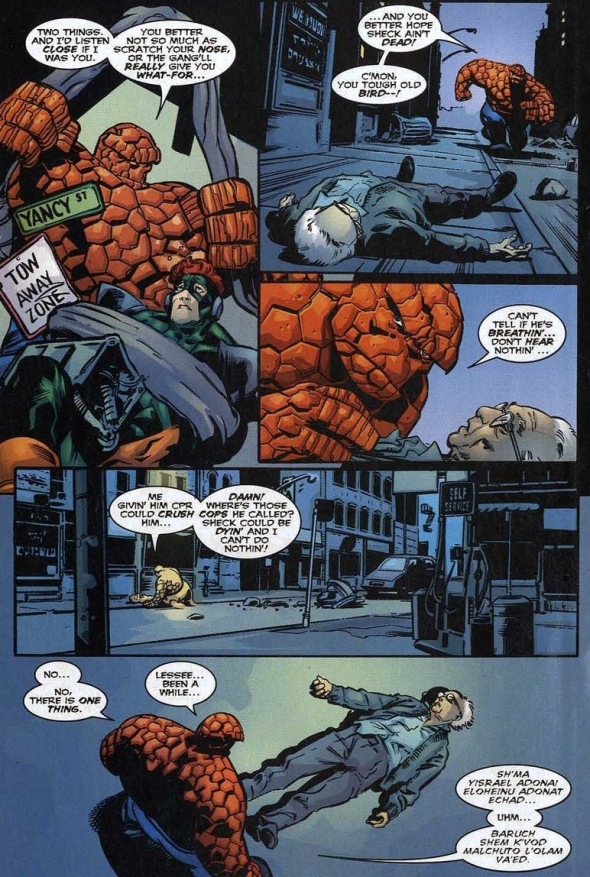 Maybe I’m just a sucker for superheroes reciting Jewish prayers, but I like to think that even with decades of ignoring his Jewish heritage, it’s always there for the moments he needs it.  A religious security blanket.  Plus, the Thing hears a sermon that’s desperately overdue: 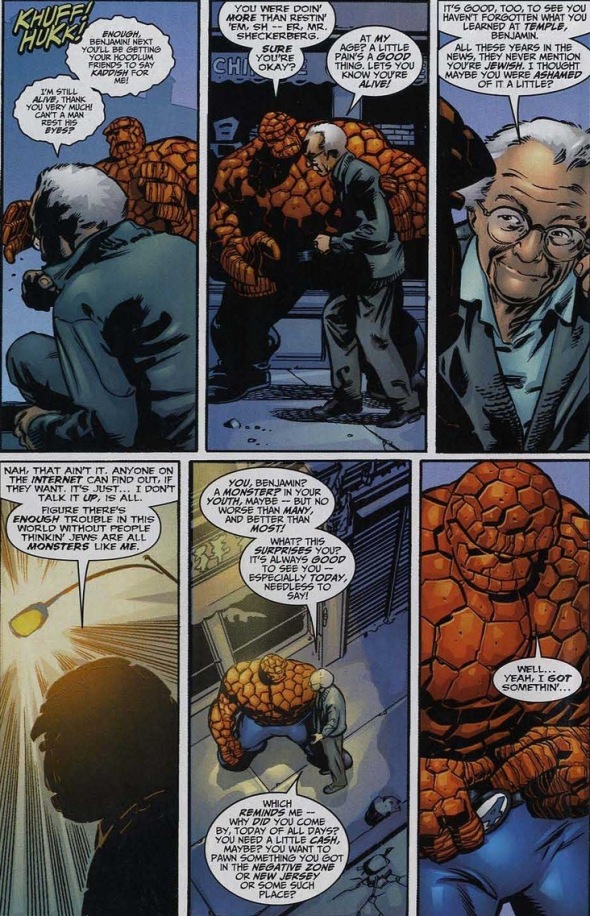 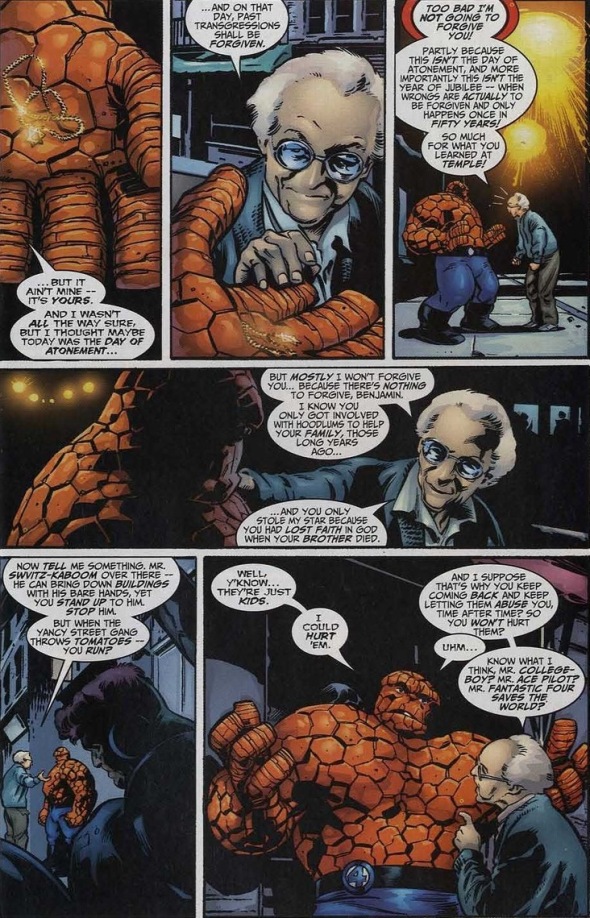 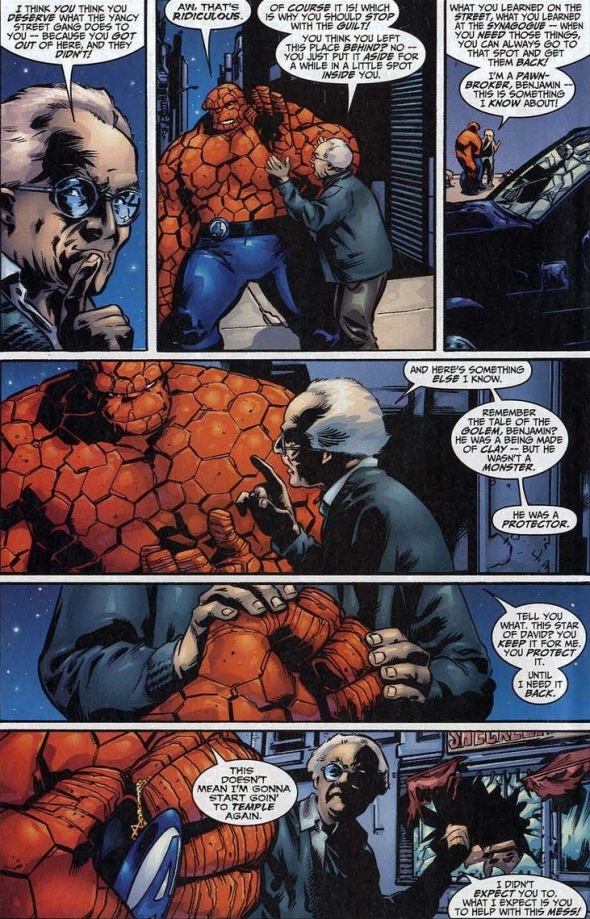 I adore the golem reference.  The original Jewish monster, the golem (a hideous creature made from mud) protected the Jewish people from those who wished them harm.  And Grimm, now with his rocky armor, gets to be the golem of Yancy Street.  For a man stuffed with self-loathing, this revelation has to be a small salve in healing the Thing’s deeply ingrained frustration over his appearance.  Or maybe I just like Jews who can lift small buildings. 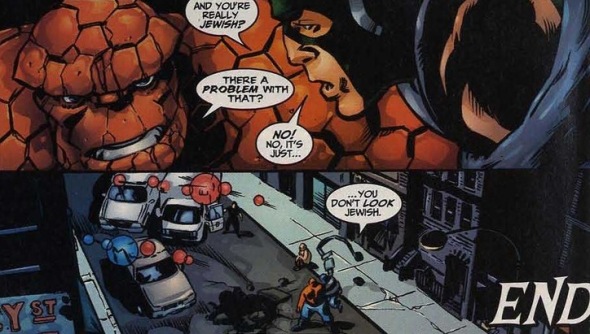 As we end with Marvel Holiday Magazine 2011 #4, written by Jamie S. Rich and drawn by Paco Diaz, the religion of these characters is not a hindering, but a significant part of both identity and character development.  Who are your religious (or atheist) superheroes?  Tell me you don’t like them just a little bit more because they share your beliefs.  Don’t deny it.  You can’t fool me. 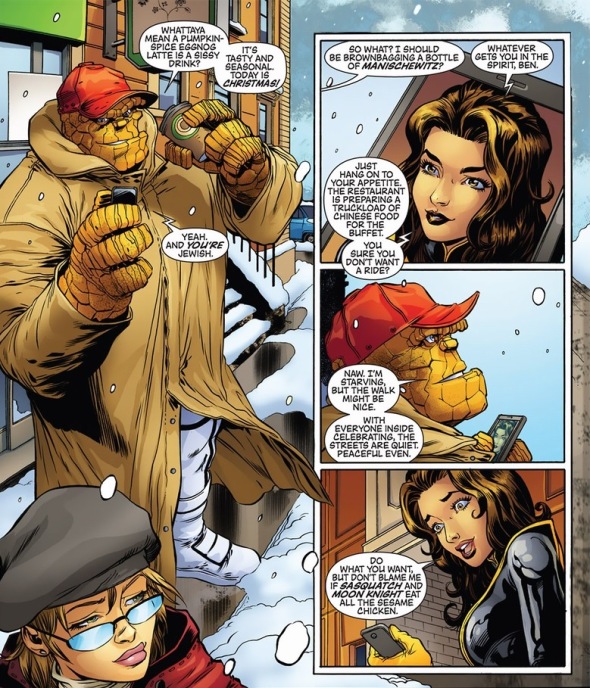 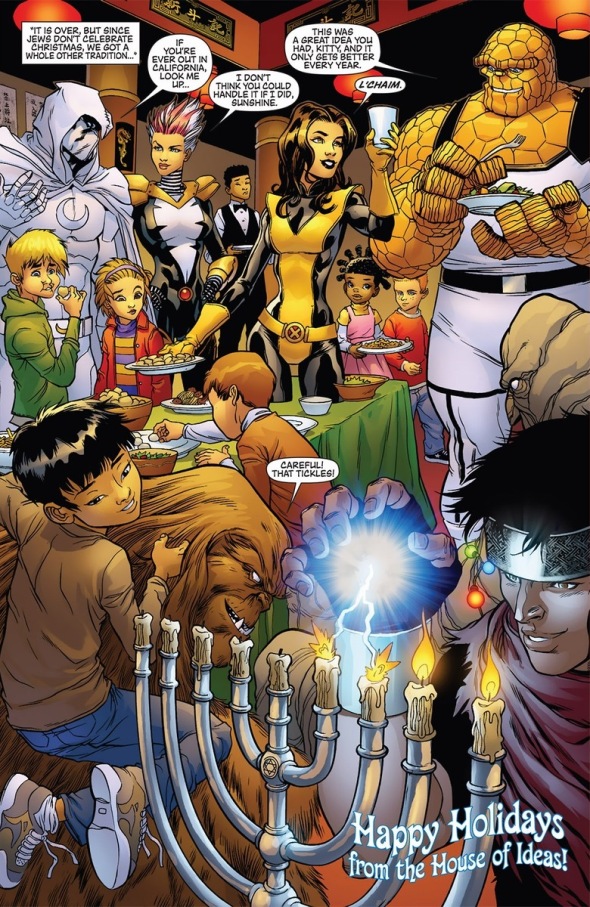 12 Comments on “Superheroes and Judaism, Pt. 3”