← Demonic baseball with Dr. Strange
The appeal of Deadpool →

Batman and Superman for kids

We all remember Batman: The Animated Series that ran in the early 1990s.  For a children’s show (and while the quality remained high, it was a show for children), the series highly influenced the Batman comic book world.  We had our first introduction to Harley Quinn.  Mr. Freeze received his brilliantly tragic back story.  I mean, the cartoon won four Emmys.  Its follow-up shows, Superman: The Animated Series and The New Batman Adventures received similar praise.  So a comic book set in that cartoon universe made perfect sense.

More importantly, as superheroes became edgier and darker in the 1990s, many of the comics simply weren’t appropriate for children anymore.  And even now, as comic book writing has achieved new pinnacles in storytelling and character development, the content can still be quite gruesome and complex.  That’s fine by me, but I’m also 27.  So what about young kids who want to read comic books?  What do they have?  I can help a little bit — check out The Batman Adventures (and its sequels) that graced our pages from 1992 till 2004.  If you’re looking for the other side of the comic book universe, Marvel has a similar line called Marvel Adventures.

Today, we’ll be reading Batman: Gotham Adventures #36, written by Scott Peterson and drawn by Tim Levins.  The art work even resembles the animated series.  Batman and Superman team up for this issue, which begins as all interactions between the two begin — rudely. 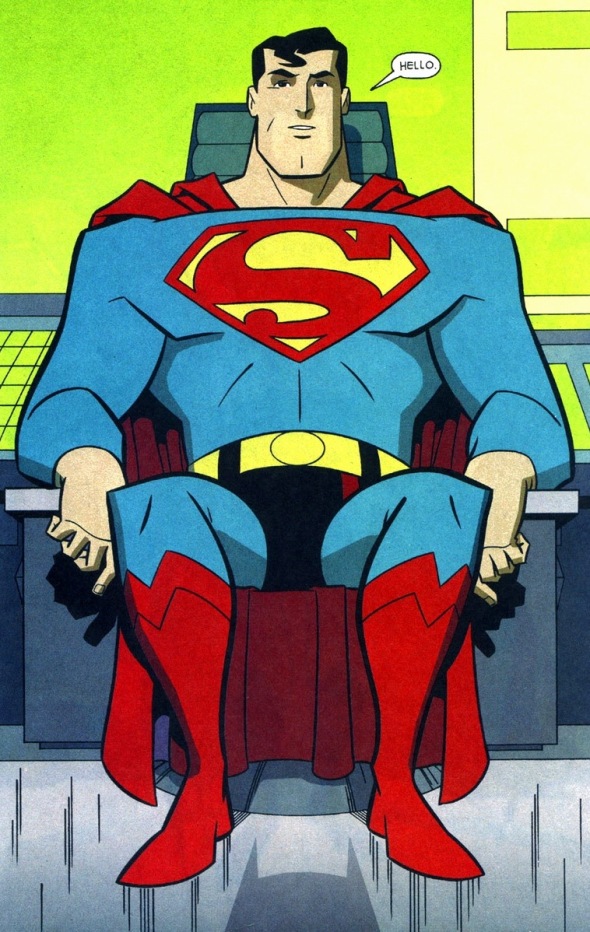 A bad guy from Metropolis fled to Gotham, and Superman checks in with his best buddy.  To be fair to Superman, Batman’s talent for finding people is only equaled by his disdain of other superheroes dropping by Gotham unannounced.  Two birds with one stone, y’see.

Though sometimes having the strongest superhero on the planet back you up can make the job simpler.  A little bit simpler. 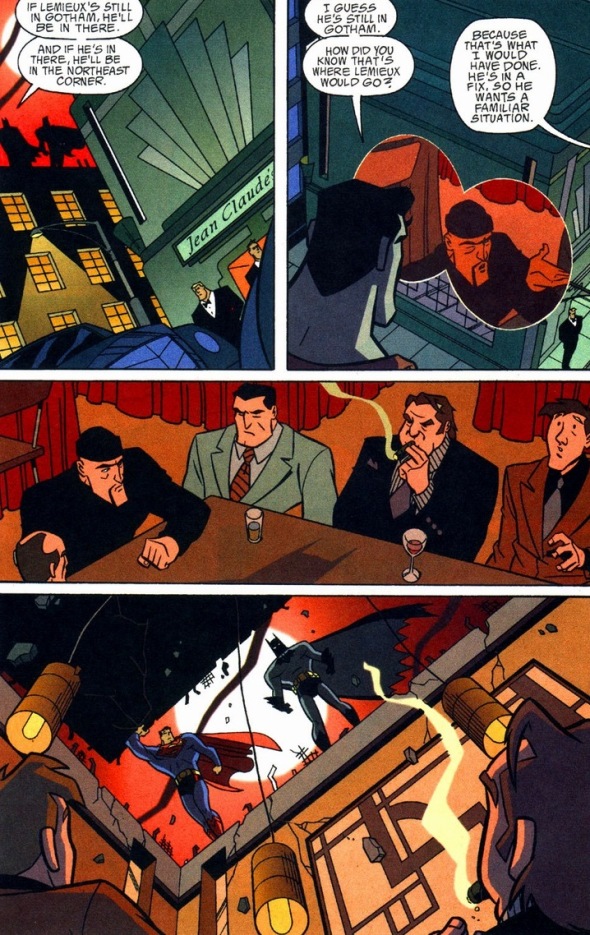 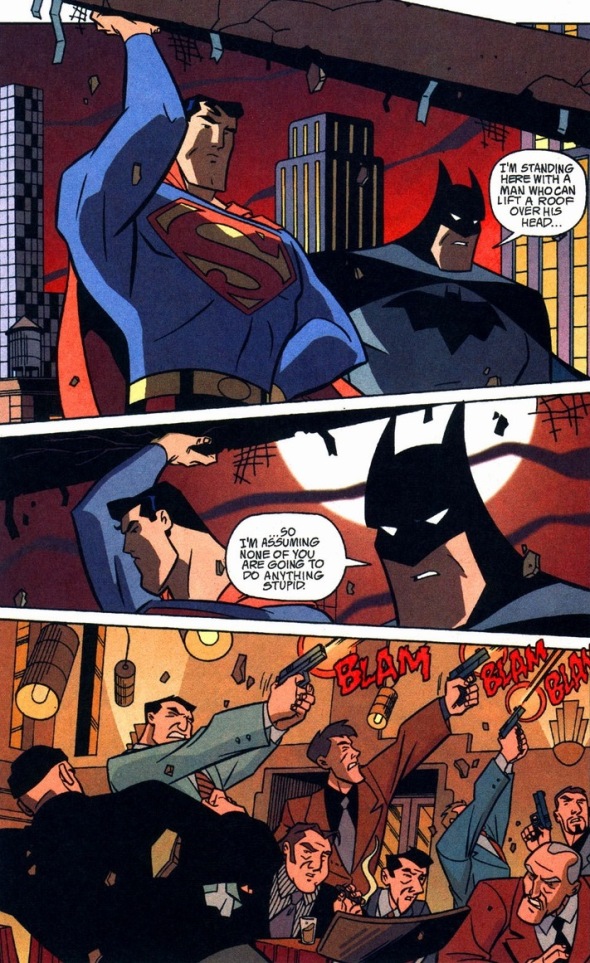 Batman proclaims criminals to be a superstitious and cowardly lot, but I don’t see a whole lot of cowardice here.  Why aren’t more criminals scared of Superman?  Sure, Batman mastered dozens of styles of martial arts in monasteries and dojos on top of the world’s highest mountains, but Superman can hoist the mountains from the earth and juggle them.  Sadly, the mobsters firing clips of useless bullets at Superman allows Lemieux to get away. 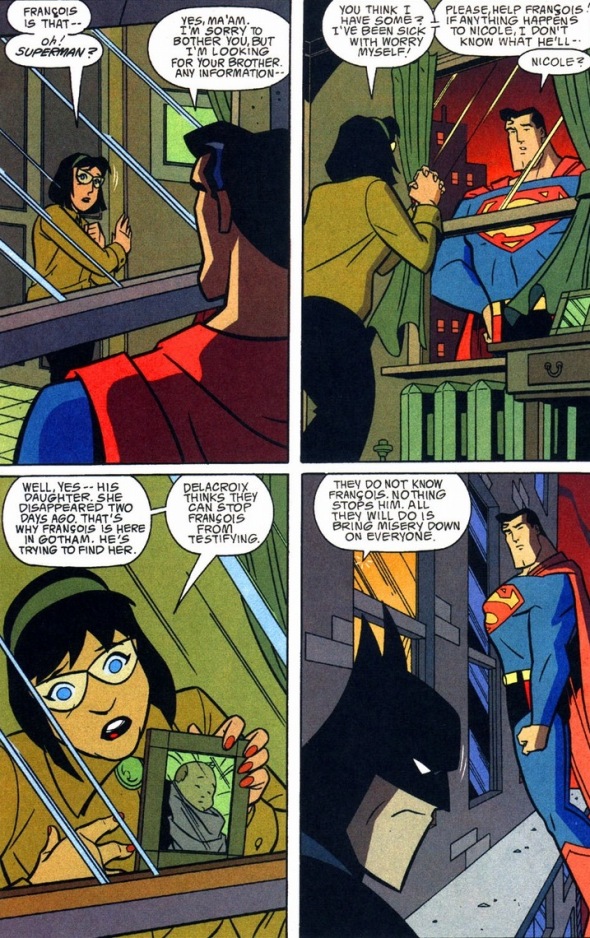 Superman’s methods of interrogation tend to be a bit softer than Batman’s.  Like using “ma’am” and apologizing ahead of time.  Is that why bad guys aren’t scared of the Man of Steel?  Is it because supervillains remember Superman had a mullet in the ’90s?

Superman’s right.  Though Batman wouldn’t smile no matter who ended up correct.

As the mob boss makes a getaway, teamwork plays a vital role in taking him down.  And you’re about to witness one of the cheesiest Superman lines you’ll read in a long time.  It’s in character, if just because that is how Superman talks at times.  Maybe that’s why criminals don’t fear Superman: they’re too busy rolling their eyes to be afraid.

Mission complete, baby rescued, family reunited.  Thankfully, like the cartoons, the comics also end idealistically happy.  If you want ambiguously melodramatic endings, you have the canon comics for that.  But the kids?  Let’s not break their hearts just yet.