One more won’t hurt, right?  Besides, it’ll serve as a fantastic contrast to how comics have evolved as a medium over the past fifty years.  I’m not here to argue whether the changes have been for the better or worse (definitely better), but this’ll be a fantastic lesson if you’re not caught up on the beginnings of the Marvel universe (everyone under 35?).  Today as we explore #14 on Comic Book Resources’ Top 70 Most Iconic Marvel Panels of All-Time — the full list available here — don’t be afraid to read closely.  The dialogue’ll sound cheesy, the plot silly, and the action brief, but The Avengers #57-58, written by Roy Thomas and drawn by John Buscema, is a perfect example of 1960s Marvel comics. Plus it contains this fantastic (and iconic) panel: 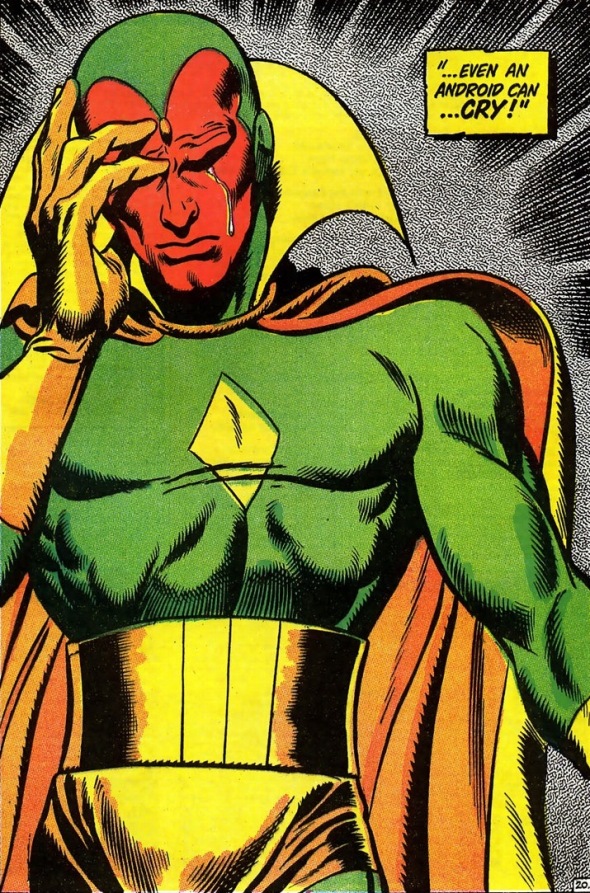 Meet Vision.  While I can’t explain the color scheme, Vision may be one of the most powerful superheroes fighting crime today.  Vision — an android with a human mind and the rest consisting of robot parts — can shoot lasers, become intangible (like Kitty Pryde), and increase his body density to become super strong/durable.  He also married Scarlet Witch back in the day, so that sort of makes him Magneto’s son-in-law.  Also, he can cry.  But in his introduction he serves as a foil, because the Avengers lacked a villain to punch that issue. 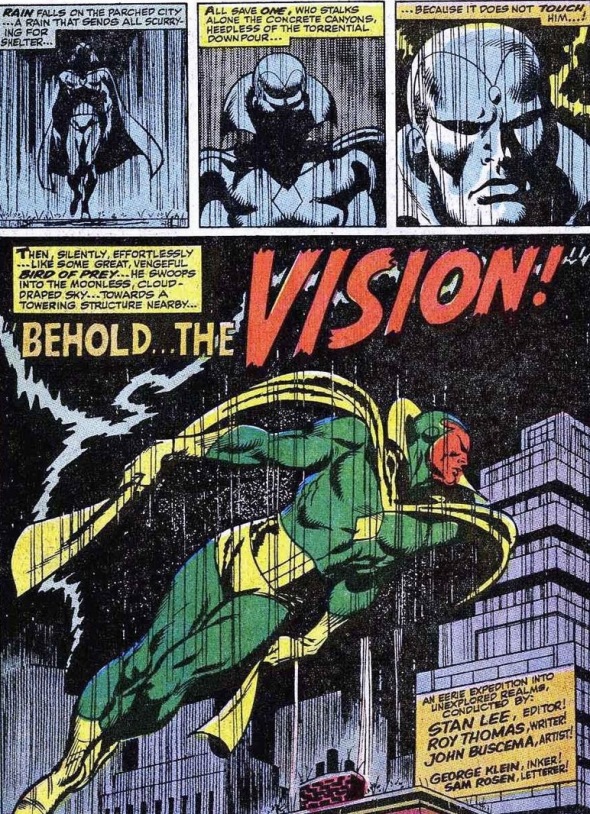 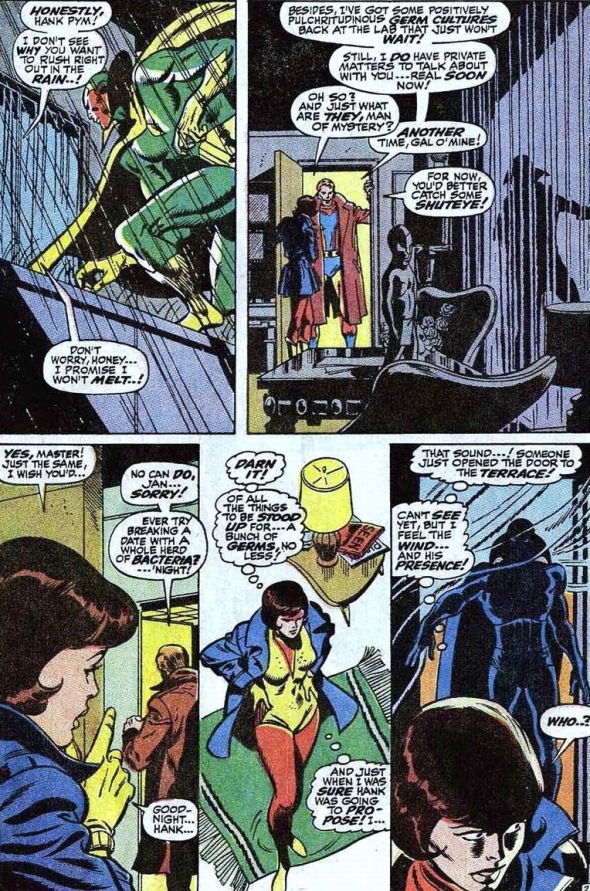 Certainly not the worst moment in their relationship, but Hank Pym has always been a fairly notoriously bad boyfriend/husband.  But then again, so has Mr. Fantastic.  And T’Challa blindsided Storm with their divorce.  Tony Stark certainly can’t hold a meaningful relationship.  Turns out that super geniuses lack that important intimacy that allows their significant others to feel wanted and loved.  Wakandan calculus?  No problem.  Making it through an entire dinner without their lady crying? Much more difficult.  Except Beast.  He’s a total gentleman. 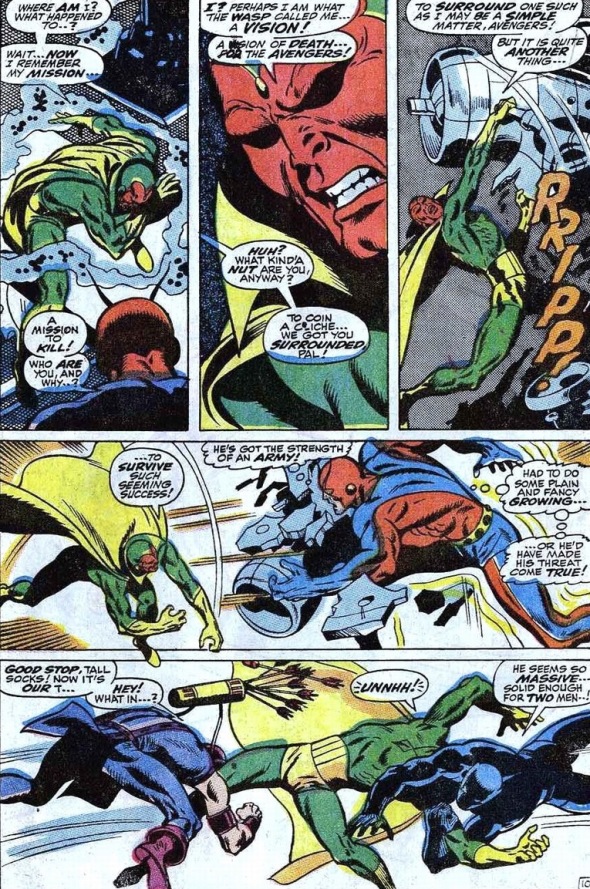 Well, not for long.  Vision’s father/creator Ultron put some sort of empathy chip or something, because the Vision only needs ten pages to go from unrelenting evil to pushover good guy.

I adore the characterization of Hawkeye.  He’s wildly rude whenever he opens his mouth.  Watch as he condescends Black Panther, a legitimate monarch of a well-liked and respected country: 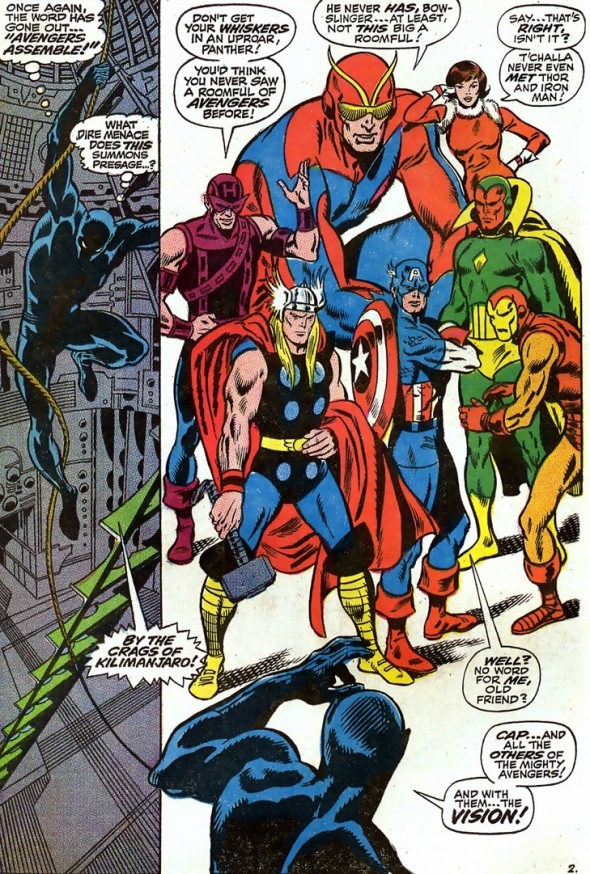 I can’t tell if Black Panther shouting “By the crags of Kilimanjaro!” is racist.  Probably not, but I miss the era of catchphrases and meaningless outbursts.  Luke Cage’s “Sweet Christmas!”  Dr. Strange’s “By the hoary hosts of Hoggoth!”  Beast’s “Oh my stars and garters!”  At least The Thing still works his into every other issue or so, even if no one currently going through puberty knows what the word clobberin’ means.  Oh, and Vision wants to become an Avenger: 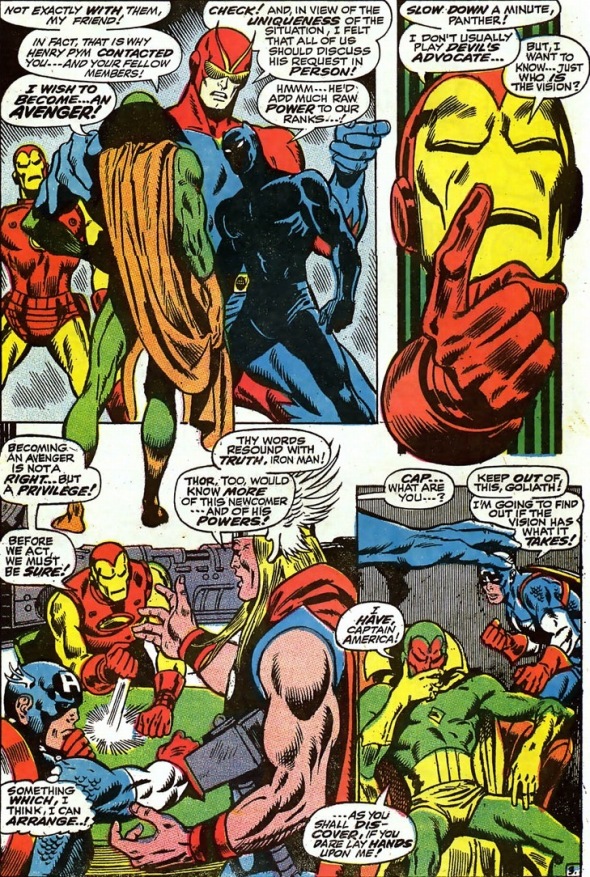 In a test befitting any new recruit, Vision has to prove he has the metal cajones to rumble with the Avengers’ big three. 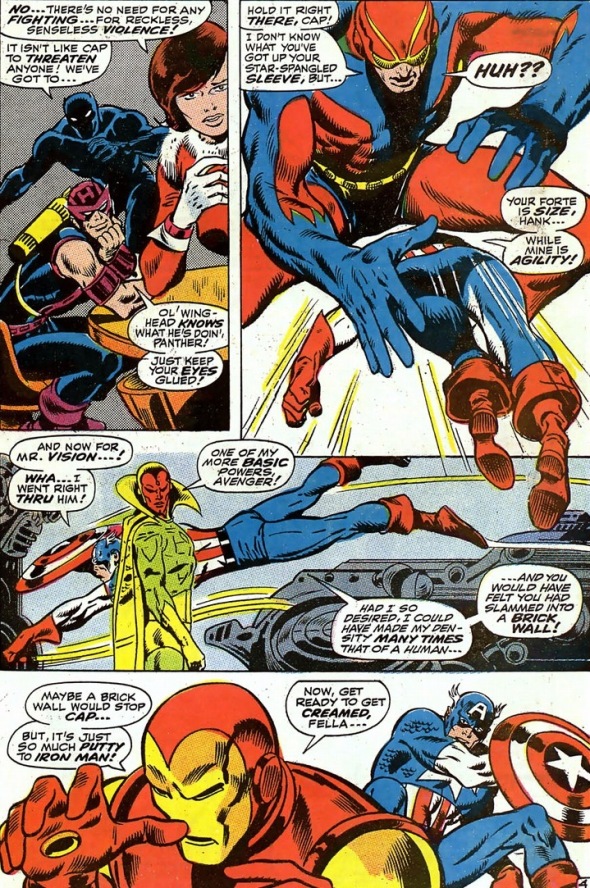 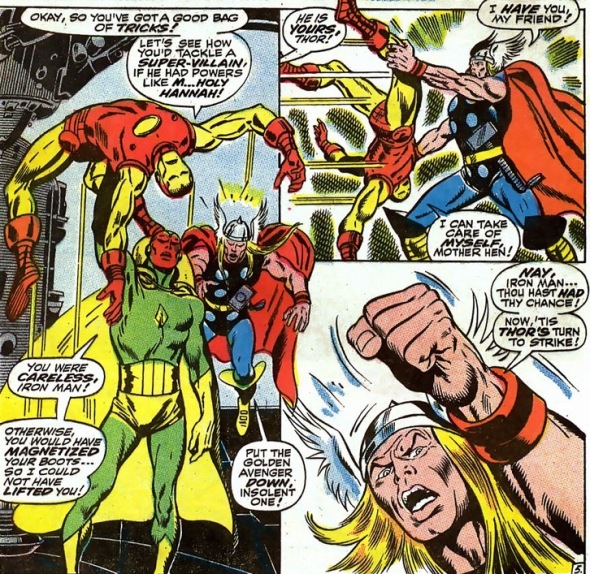 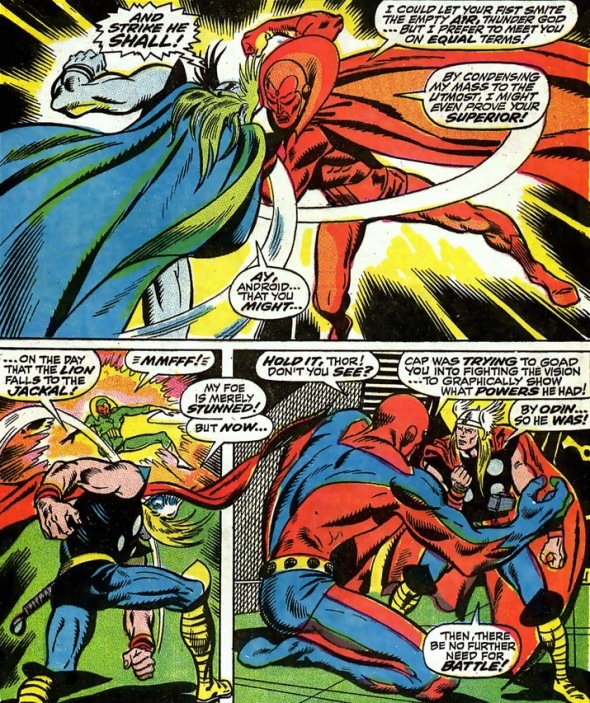 Are the Avengers satiated?  As the ritualistic vote begins to determine Vision’s worthiness commences, it really feels more like a fraternity pledging than an open door into the world’s greatest superhero team.  But to be fair, dressing up in costumes and getting into fights can also be used to describe fraternities. 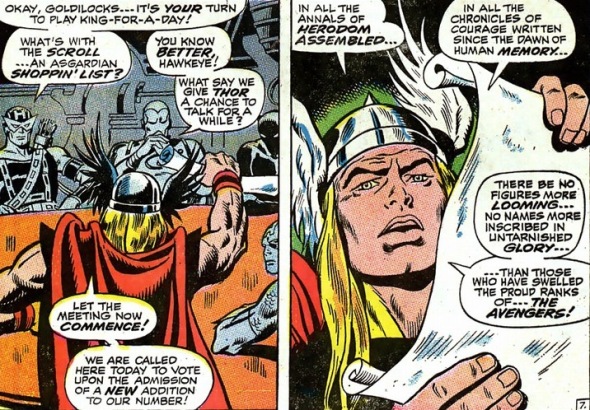 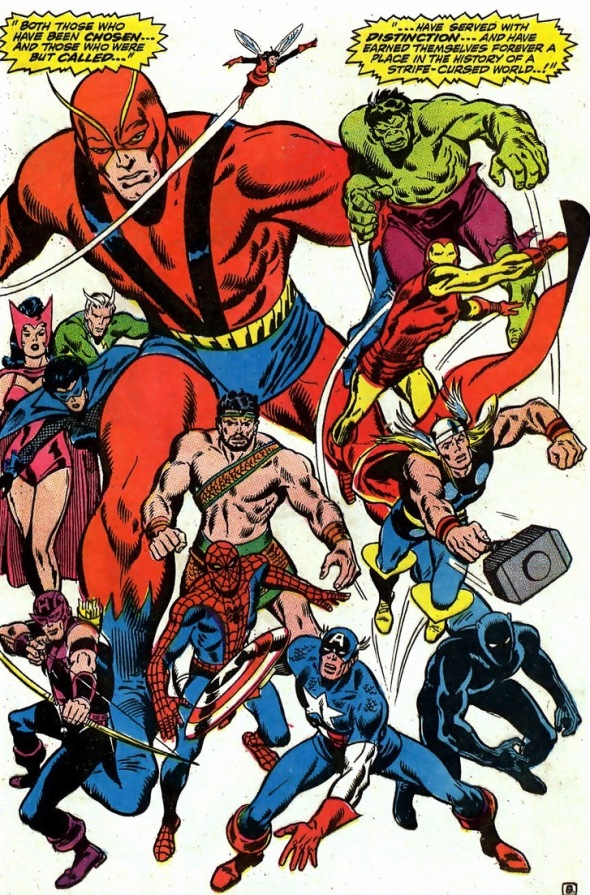 Marvel gets applauded for their diversity, as well they should.  Comics creating characters of different races, backgrounds, and origins even before the Civil Rights Movement deserves every bit of our praise and respect.  And now the diversity gets upped once again, as the Avengers welcome the newest member into their ranks — robot and all.  Only supervillains judge. 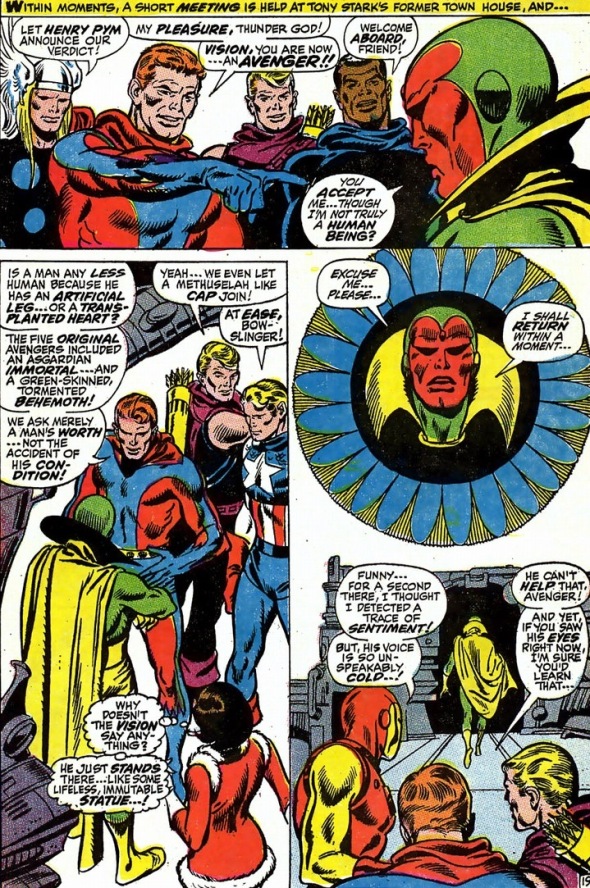 On Wednesday, we’ll return to the modern age.  But this detour has been fun right?  And can someone give Vision a hug?