When we left off, our two heroes (the ones in the title of the article) faced down each other’s supervillain.  Green Arrow gets to break a bow over Red Hood while Batman deals with the rocky, toasty Brick.

I admire Red Hood, because fighting in a leather jacket really lessens maneuverability.  Though despite it looking super cool, he’s also about to brawl with a man who doesn’t wear sleeves, so the fashion victory lays at his feet from the start.  I’m not going to show you the entire fight, but enough so you get an idea.  Batman and Green Arrow are Justice League members after all. 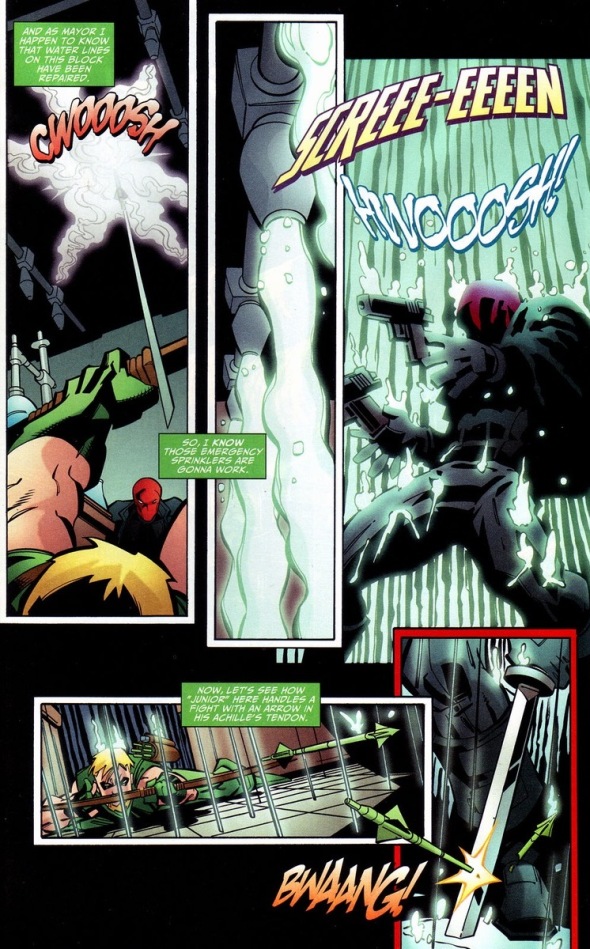 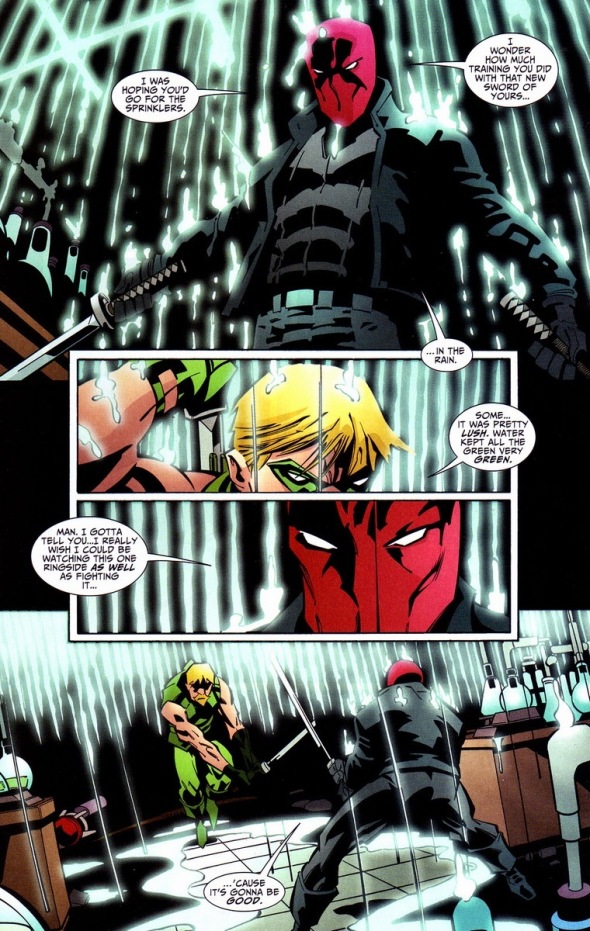 Danny Brickwell, currently known as the Star City kingpin Brick, has metahuman superpowers that give him some level of invulnerability and super strength.  While not trained by Batman/League of Assassins like the verbose Red Hood, Brick still enters the battlefield as a formidabble opponent. Even against the Dark Knight, who would like to cross beat-up-guy-with-dreadlocks off his bucket list. 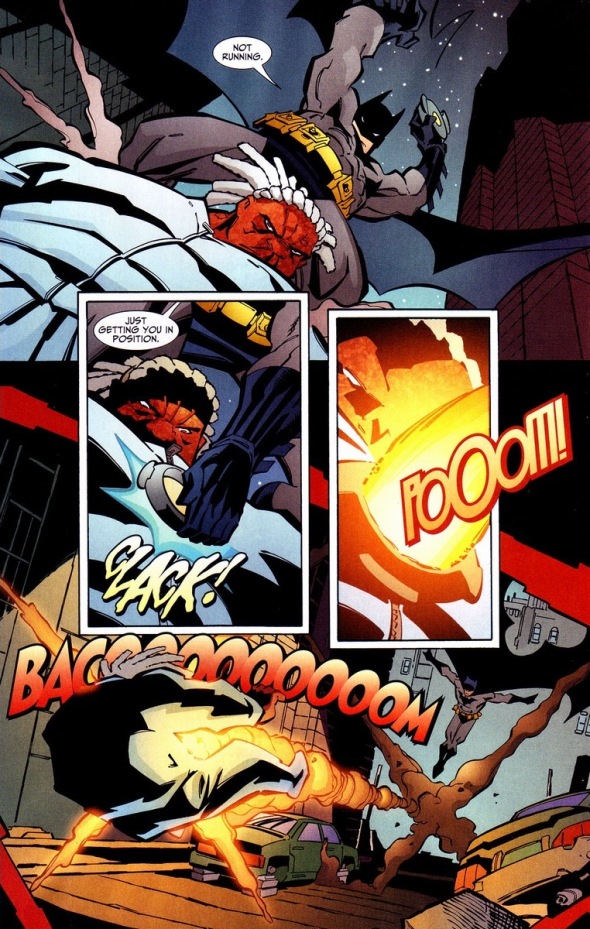 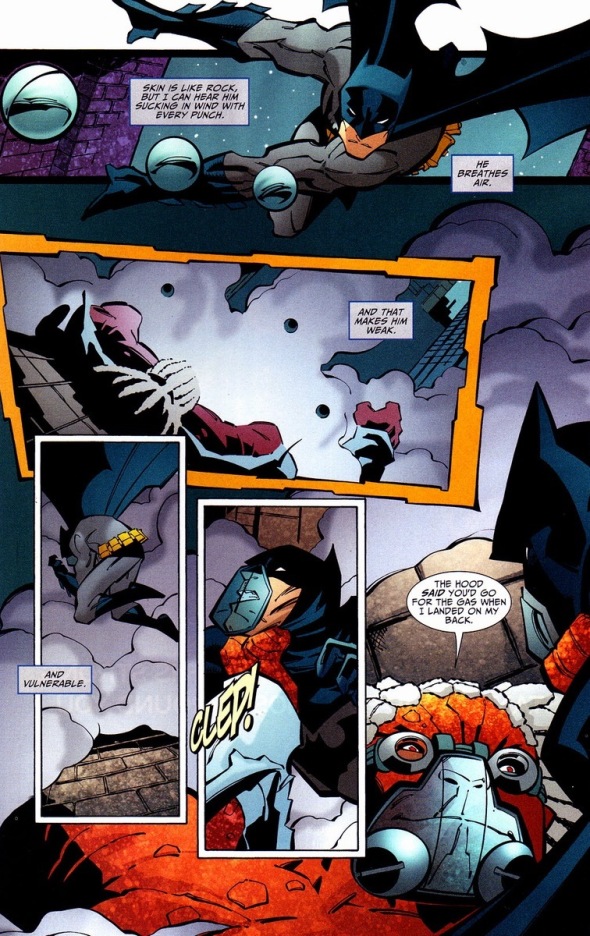 We’re missing somebody.  Remember Speedy, the young teenage female sidekick?  While she would have loved to help smother Red Hood with her mentor, something else grabbed her attention — that annoying superhero obligation that always pops up in worst case scenarios. 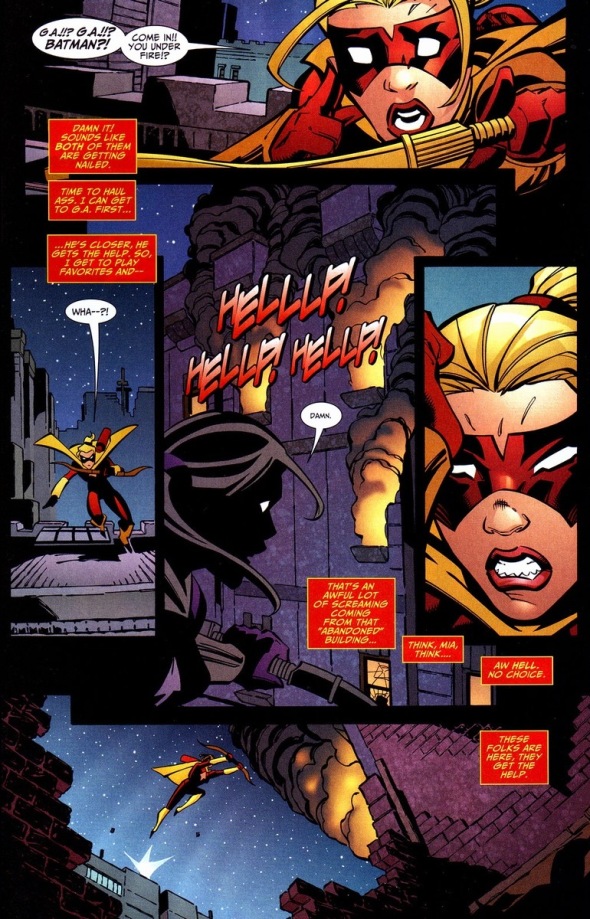 Unfortunately for dear Mia, it gets even worse.

Red Hood possesses some major personality flaws.  Like pettiness.  So despite coming here to further solidify his drug empire, a secondary goal popped up.  One that’ll serve mainly to infuriate the old-timers and rattle the youngsters, because nothing makes Jason Todd happier than the indignation of the Justice League.  Oh, and now Batman and Green Arrow revert back to their normal status quo:

The two argue in warehouses, alleyways, rooftops, etc. — really anywhere stained with henchmen blood.  Sidekicks, I believe created for child reader fantasies and to give superheroes someone to talk to, undergoes a never-ending debate of boredom, frustration, and all sorts of awful emotions.  Batman has ten year-olds wearing brightly colored tights uppercutting adults.  It took the Dark Knight fifty years just to give Robin pants.  And Green Arrow?  Besides letting his sidekick actually call himself Speedy, his buddy had the lucky honor of being chosen to participate in DC’s anti-drug campaign a few decades ago.  We move on.  Also, Green Arrow and Batman can totally inflict non-physical wounds as well. 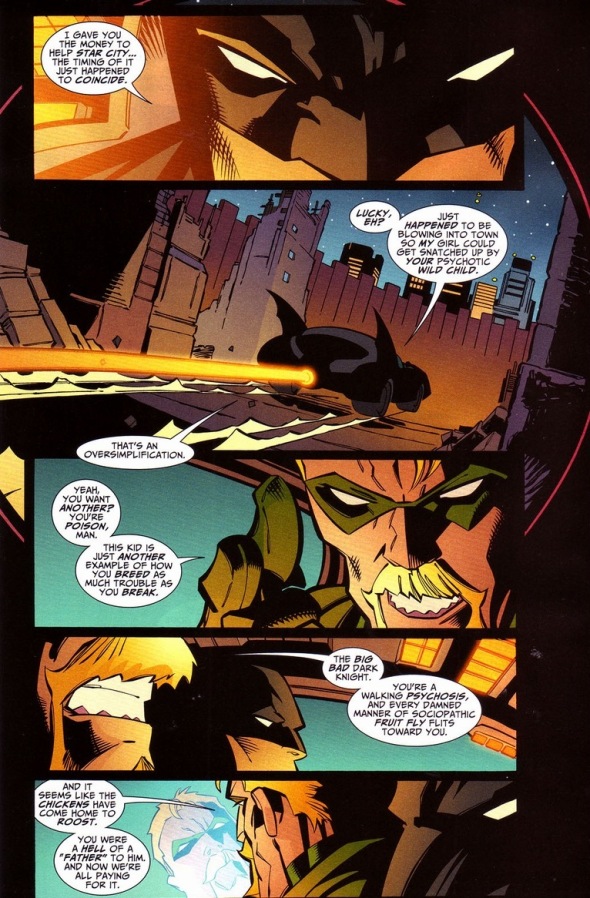 As for Speedy?  Red Hood just wants to chat.  Unfortunately for supervillains, chatting has to be activity that takes place inbetween trying to murder each other.

If you haven’t read Mia Dearden’s Wikipedia page or aren’t caught up on Green Arrow comics, Red Hood’s reveals her biggest, darkest secret.  I mean, it’s been told like a half dozen times before this, but now you can be in this obscure trivia club as well.

Writer and director Kevin Smith introduced Mia about seventy issues beforehand.  Winick, who eventually took over the series, figured that if Mia spent her teenage years as a drug-addled prostitute, well, that may come with some consequences.  As comics fans, we’re more accepting of Martians and Amazons than those with STDs.  And Martians are green and stuff.  So bring on the HIV-positive characters, I’m 100% serious — nothing speeds along diversity like flooding the market.  How about Aquaman?  What about a miniseries involving a rough night with a sketchy mermaid? 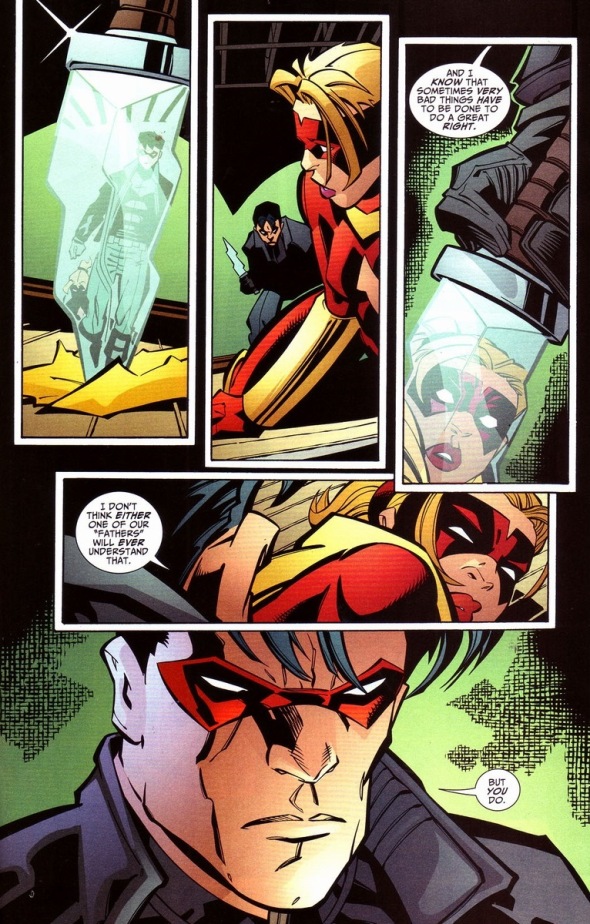 To be fair to Batman and Green Arrow, I believe the pulling kids off the street stuff plays more into giving down-on-their-luck kids a chance to become something wonderful and great instead of another bad guys they’ll have knee in the face one day.  But Red Hood’s also a bit unstable, like justifying his evil actions as a means to an end instead of a several year adventure to make Bruce Wayne cry.

The issue ends fairly anti-climatically, but that’s just one more way for Red Hood to anger his former mentor — taking away that wonderful feeling of closure. 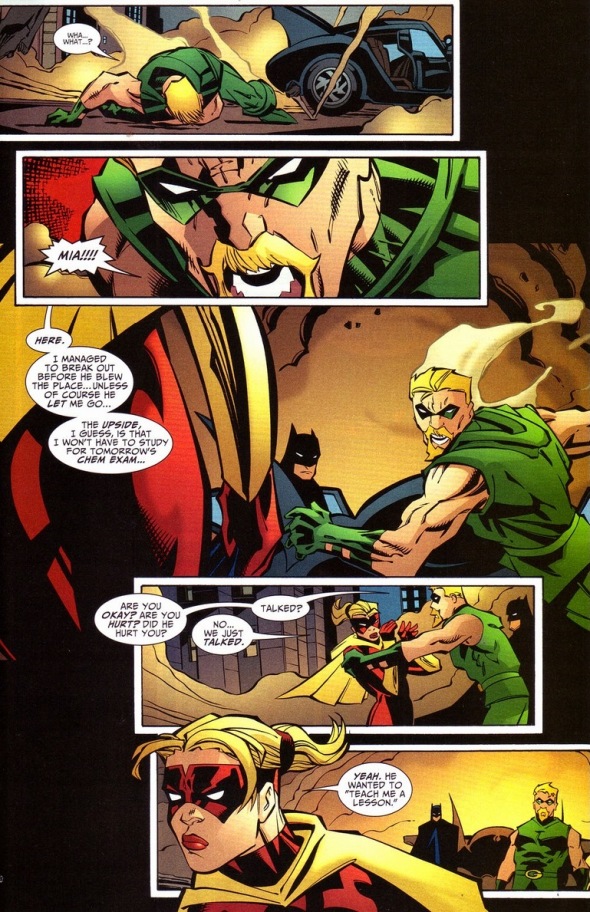 Good stuff planned for Monday!  Do something great this weekend!