You’ve just seen two days of Connor Hawke (using the Green Arrow title after his father exploded) karate chopping Silver Monkey through all sorts of destructive environments.  But no more Silver Monkey.  Now, his fellow apes get given the task of taking down the new Green Arrow.  Over a five issue story, crossed over with the Batman titles, Hawke has to prove his worth against the deadliest assassin of them all.  She’s scary.

To sum up the consequences of the previous Green Arrow versus Silver Monkey fight:

What’s better than ninjas?  Obviously a deluge of ninjas that floods any city where non-powered superheros, vigilantes, UFC fighters, or kickboxing classes dwell.  Instead of poo, these monkey are going to be flinging death upon anyone who dares venture upon their path.  Also shurikens.  They’ll fling those too.  But among the tribes, one monkey stands out above the rest:

Yes, that’s Hawke’s final opponent of our kung fu adventure.  The mask serves to heighten suspense at her true identity, but you can probably figure out which famous Batman-centered female martial artist supervillain she is.  Also, I put her name in the file for every picture posted so far.  In the matter of fairness, since we just witnessed the Paper Monkey rip apart a whole squadron of ninjas, I feel Green Arrow deserves a similar introduction.  Plus, he’s the guy we’re going to be rooting for. 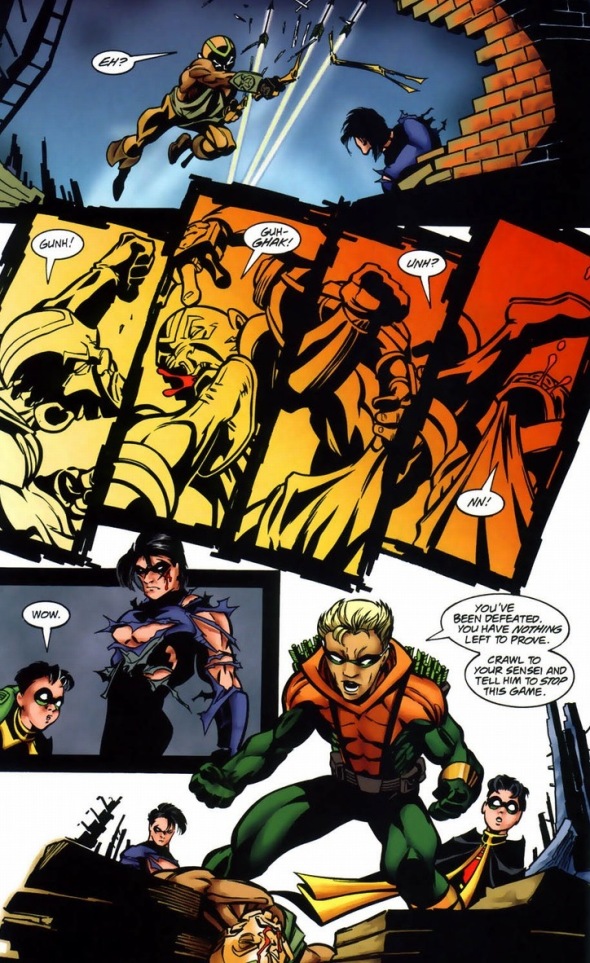 Lady Shiva!  An unbeatable opponent who even Batman can’t defeat in one-on-one combat.  If you’ve played Arkham Origins, she serves as one of the sidequests — and even that ends in a tie.  She birthed the second Batgirl, trained the third Robin, and constantly antagonizes Nightwing.  For more, you can see Cassandra Cain’s defining moment. 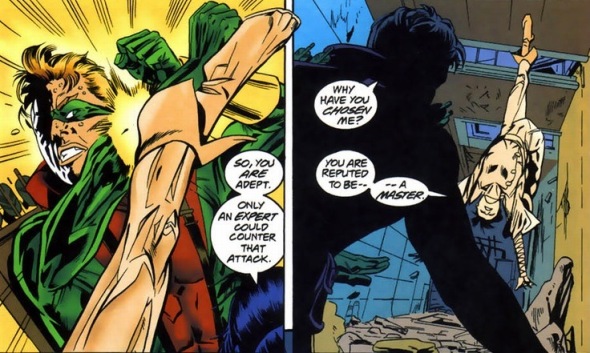 Lady Shiva’s M.O. isn’t complicated.  She hears about a super talented deadly martial artist running around.  She finds this man or woman and then kills them with her superior punching and kicking.  It’s not even a fear of losing her top kung fu spot either — she just enjoys the punching and kicking.  Her only gimmick lies with when she shows up looking for you, you’re totally dead. 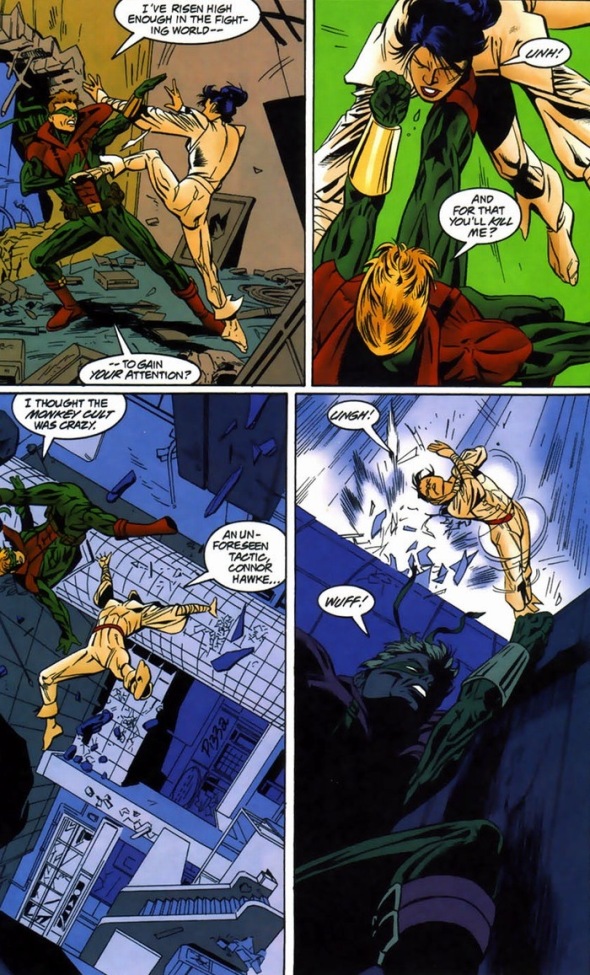 Batman and the Batfamily usually defeat (or at least shoo away) Lady Shiva through brainpower, but poor Hawke doesn’t possess Batman and the Batfamily’s brilliance.  He’s going to have to beat her into submission, and she’s especially resistant to beatings (if you haven’t been able to tell from her arrogance).  But Green Arrow did defeat Silver Monkey after a wave of damage, so as we watch the final act of their battle, keep your spirits high. 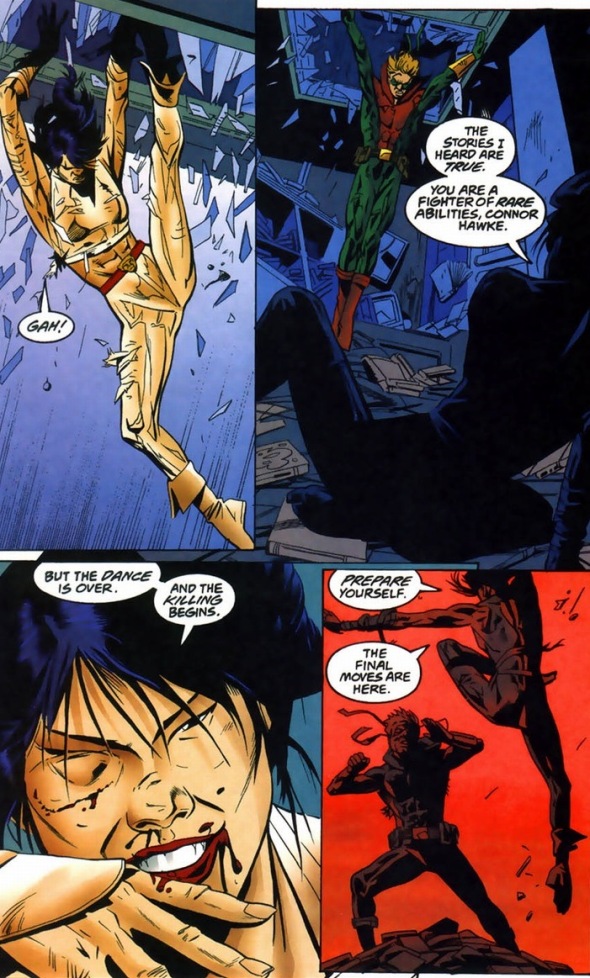 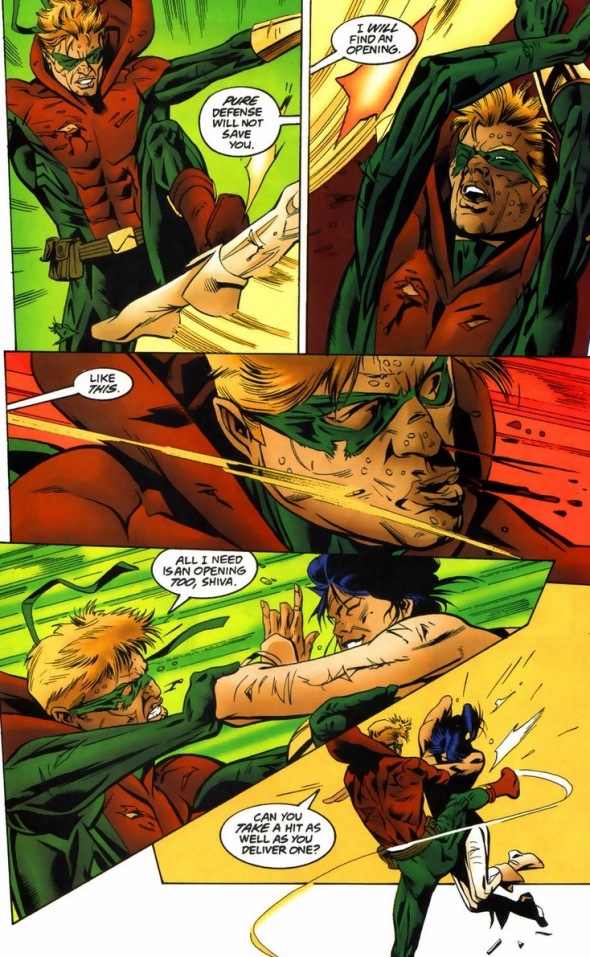 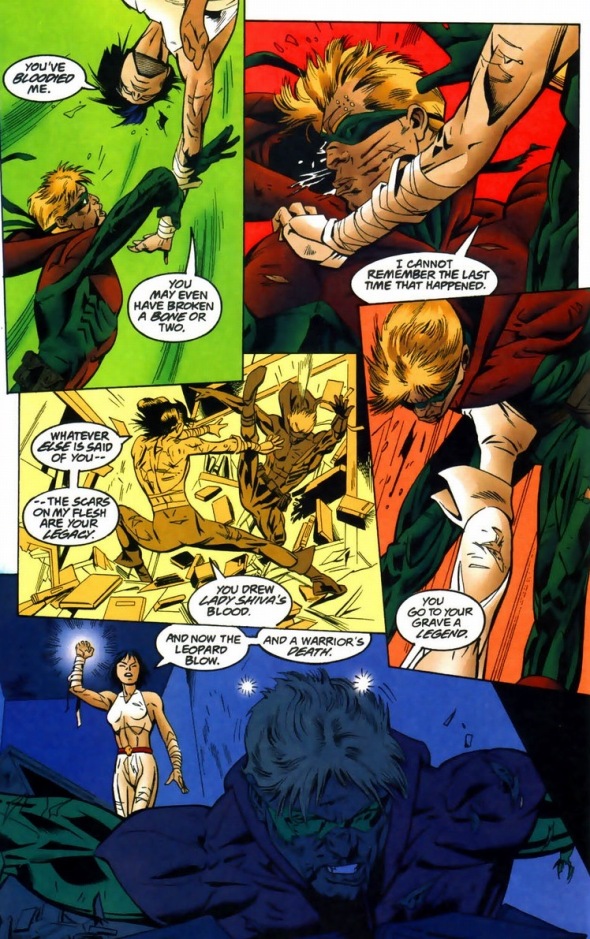 He loses.  Everyone loses to her.  Turns out when I did some research, Leopard Blow totally exists as a real fighting move.  Whether it can kill someone remains to be seen, though humans tend to be pretty soft and squishy.  Remember how I said Lady Shiva trained Robin back in the day?  And how the Batman family defeats her using their mind and not lethal animal punches? 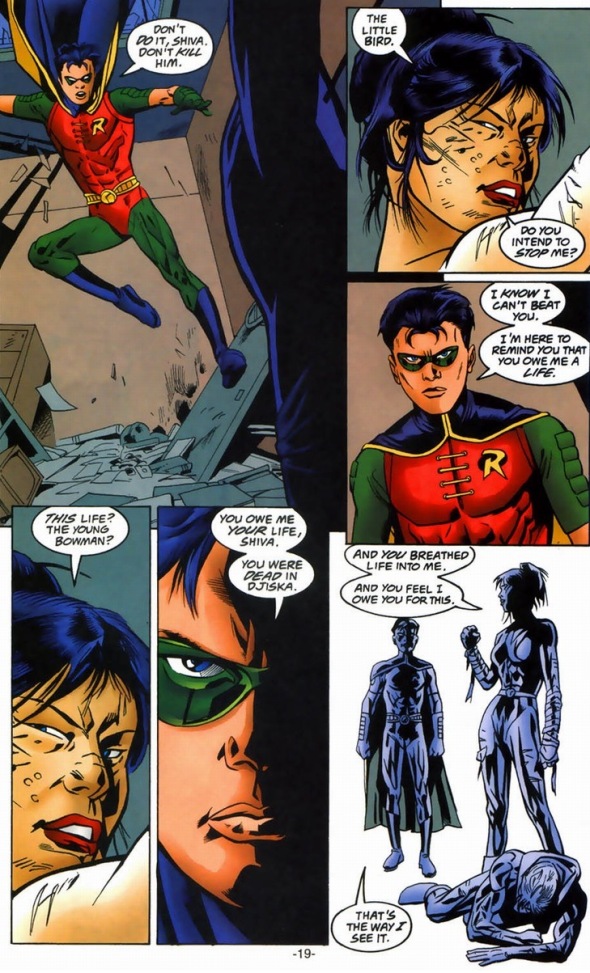 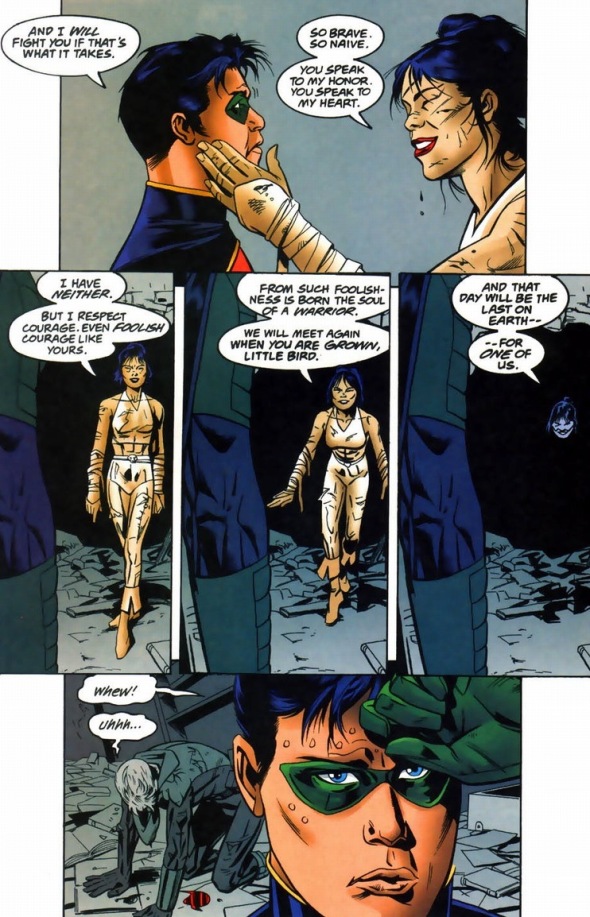 Robin would have had his butt handed to him, and even Lady Shiva called his bluff.  But despite a humiliating loss by Green Arrow, surviving a fight (much less actually hurting Lady Shiva) remains cause for celebration.  Plus, no one can argue with a smile or two after knocking out several dozen ninjas and the world’s deadliest assassin.  But you know who always seems to rain on parades? 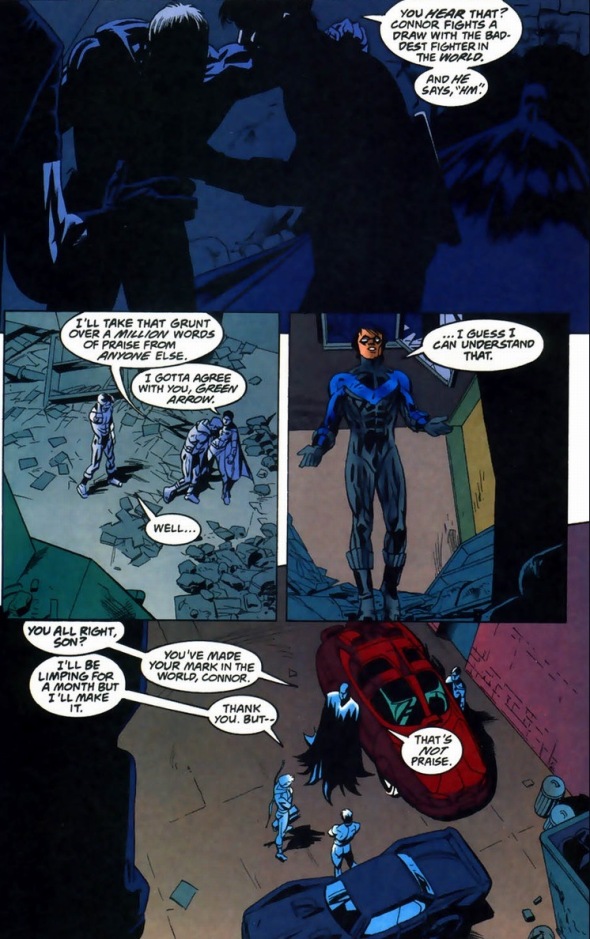 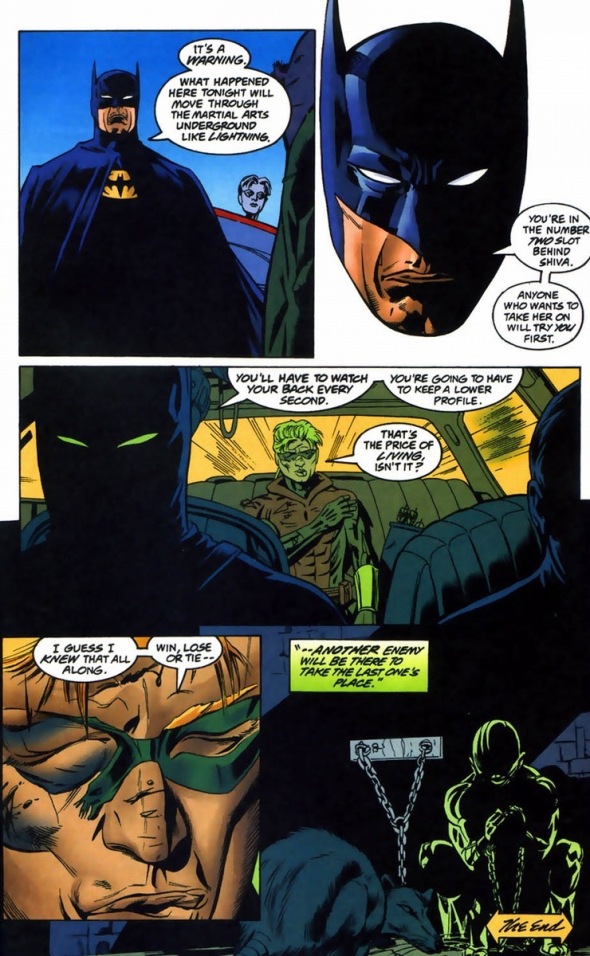 Hawke hasn’t appeared in the New 52 yet, but also with the de-aging of Green Arrow Oliver Queen down to his mid-twenties (I guess?), it’d be odd for the man to have a 20-something year old son.  Oh well.

Enjoy your weekend, you deserve it.