Spider-Man and the first Sinister Six

In honor of Doc Ock Spider-Man’s battle against the Sinister Six next issue in Superior Spider-Man Team Up #7, I figure we should check out his first fight against the sextet.  And buy the next issue, it’ll be awesome!

I adore Superior Spider-Man.  It’s perfect Doc Ock — all his potential and all the wonderful things he’s attempting as a superhero slowly falling apart by his own ego and brutality.  While he may be a better crimefighter than Peter Parker, he’s not a better person, and that’ll eventually be his downfall.  Morality tends to matter far greater than talent when it comes to longevity in the comic book world anyway. With his upcoming arc against Green Goblin, I’m a giddy schoolgirl every time a new issue comes out.  That and I prefer the comfort of dresses.

Way back in 1964, Spider-Man (actual Peter Parker) first met the Sinister Six led by Doctor Octopus (actual Doc Ock) in Amazing Spider-Man Annual #1, written by Stan Lee and drawn by Steve Ditko. The success and praise from this issue comes from a brilliant artistic choice: every time Spider-Man lands the finishing blow (or close to it), we get a gorgeous full page punch.  You’ll see. 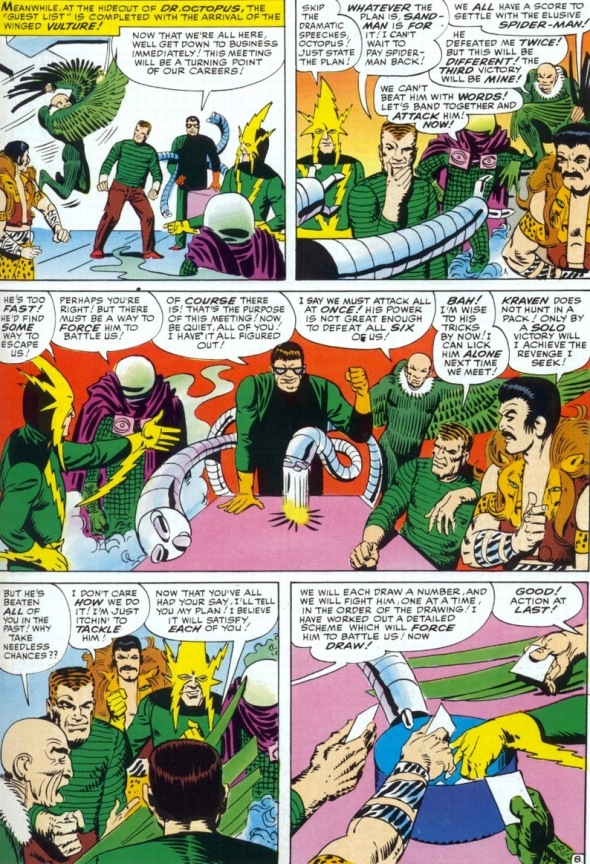 There you go, the original lineup.  We have Doc Ock, Sandman, Electro, Mysterio, Vulture, and Kraven the Hunter — actually pretty close to the current lineup.  Kraven’s currently off stabbing dinosaurs with spears in the Savage Land somewhere.  Also, he’s cursed with immortality due to the sacrifice of an imperfect clone of Spider-Man in his resurrection ritual, but that’s a different story entirely.

First on the agenda: bait Spider-Man into going through a gauntlet of supervillains.

So if you’ve been reading the beautifully cheesy 1960s dialogue, Spider-Man has no superpowers.  I don’t know why, but that side plot gets resolved in two pages, so I wouldn’t think too much on it. Also, I love that J. Jonah Jameson assumes Spider-Man’s illiterate.

To save you from my rambling mid-fight, I’ll post each battle in full (usually three or four pages) and then I’ll ramble. 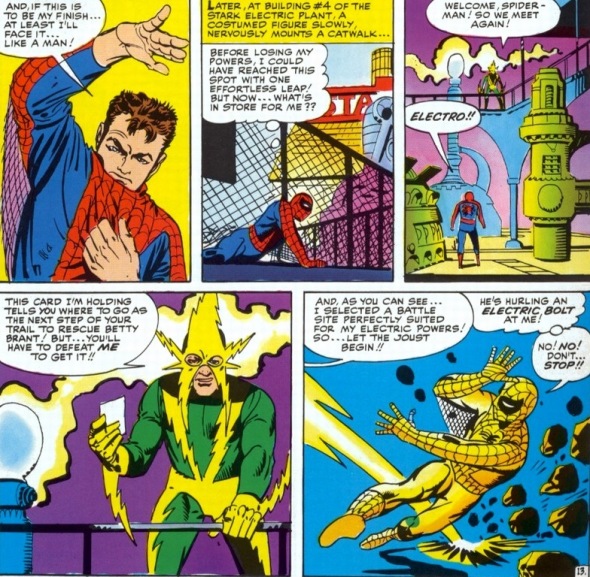 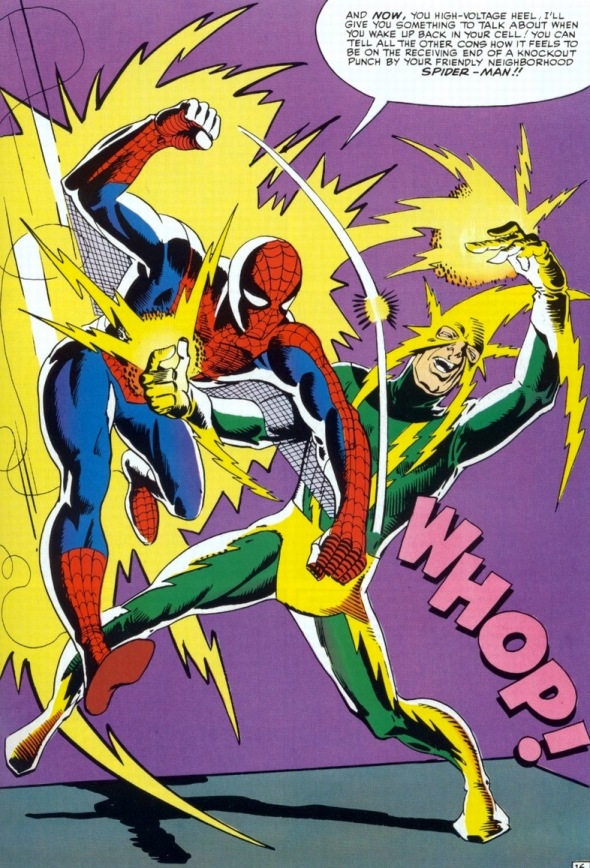 Yessir (or ma’am), you’ll be getting six of those beautiful full page smackdowns.  Electro, like many of Spider-Man’s supervillains, has received some major upgrades in the past two decades or so.  Now he can travel through electrical currents and he no longer looks like an ornate Ku Klux Klan member. Though to be fair, he’s still just as punchable.

Round 2: Kraven the Hunter 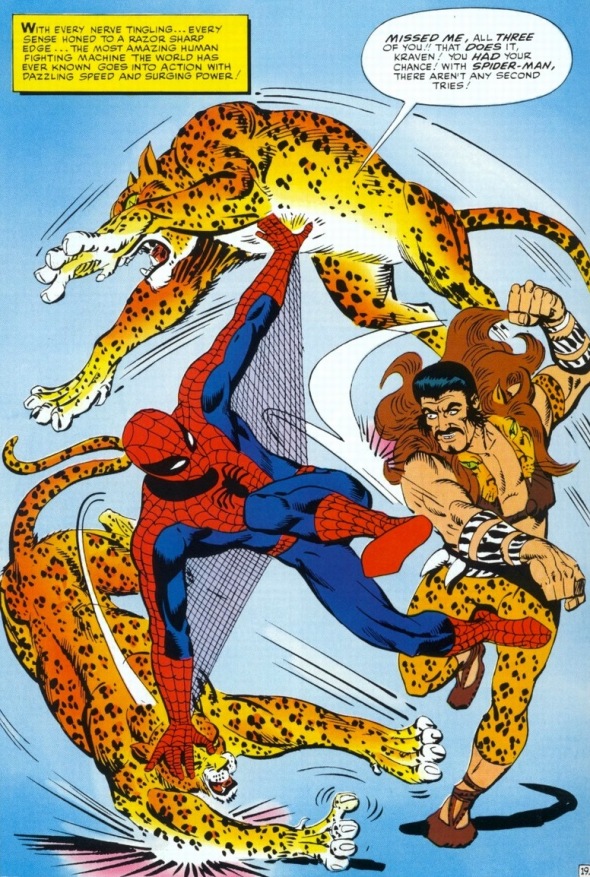 For reference (and I had to look these all up), Spider-Man talking about Thomas E. Dewey, the Republican candidate for president in 1944 and 1948.  Gunga Din references a 1939 movie based on a poem about an Indian Bhishti.  I can’t tell if Spider-Man’s being racist or not.  Sometimes I get jealous I can’t appreciate name drops back from my grandparents’ day. 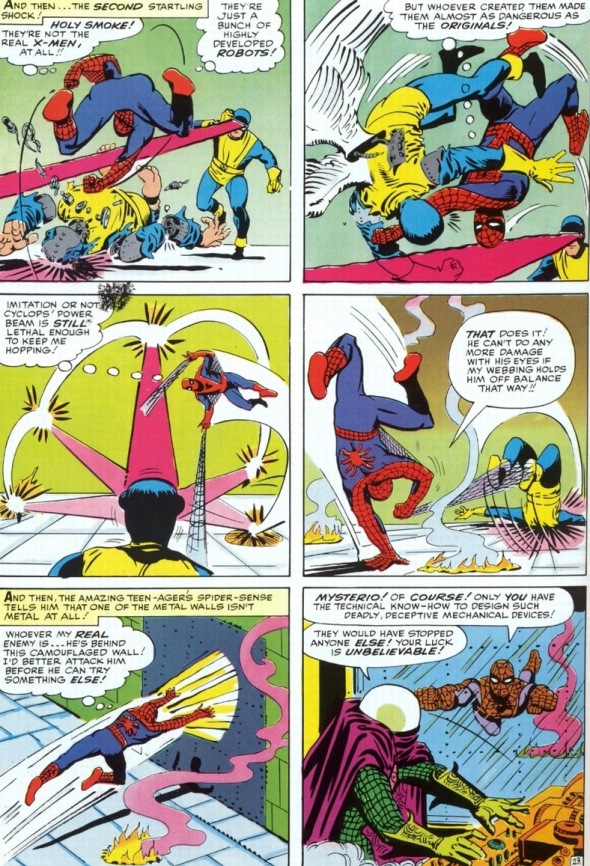 Beast has a good eight years left before he becomes that blue furball.  Also, remember the good ol’ days when a superhero’s power could only be flight (Angel)?  Nowadays, if a dude can fly, his wings also double as a portal to a lost dimension of angry giant pterodactyls or something.  Also, could someone write that for me? 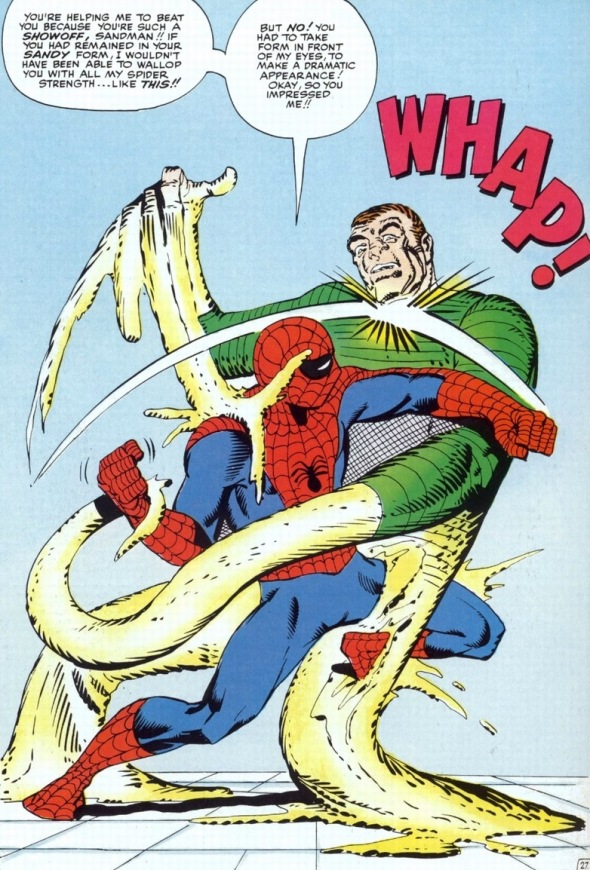 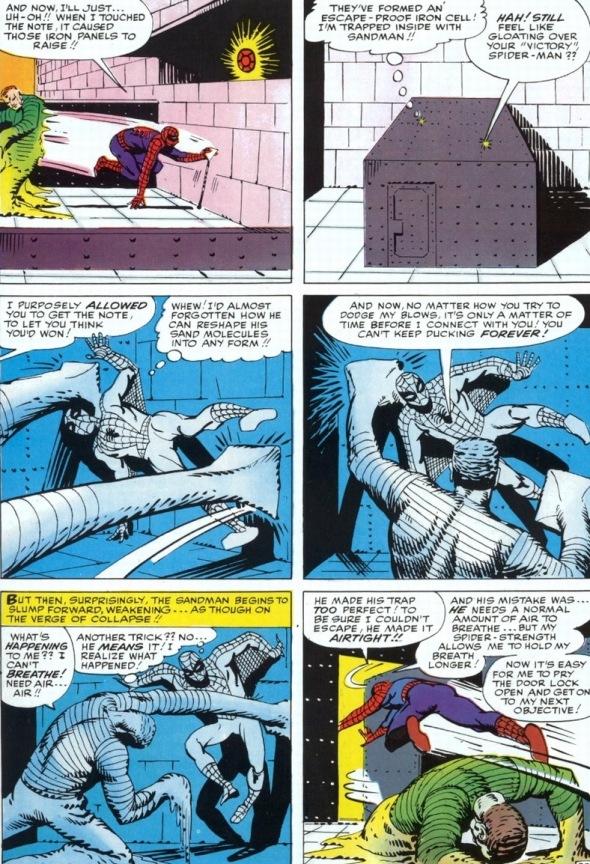 In the right environment, Sandman should truthfully be the most dangerous of all Spider-Man’s baddies.  You can’t really punch sand.  I mean, if he stays away from a hose, Sandman’s pretty much invulnerable.  Though he does lack breath-holding spider-strength. 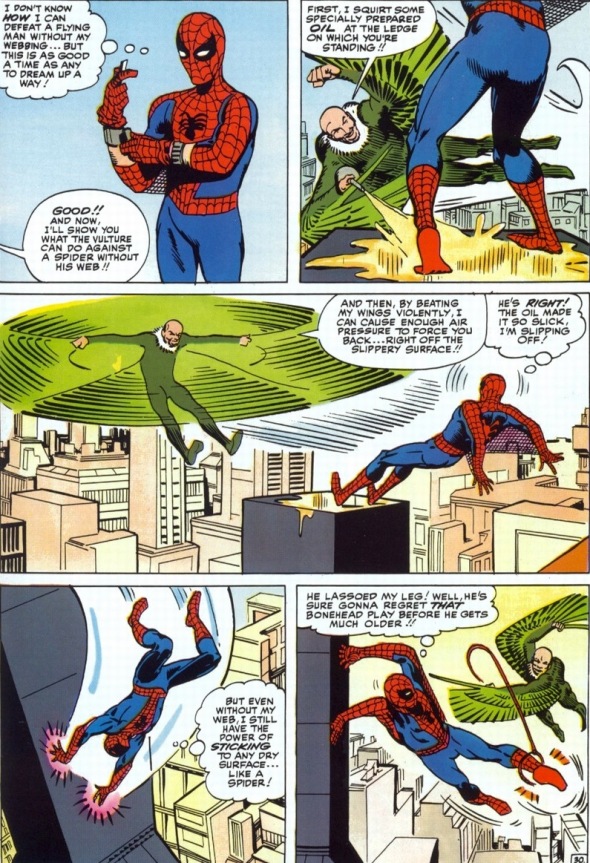 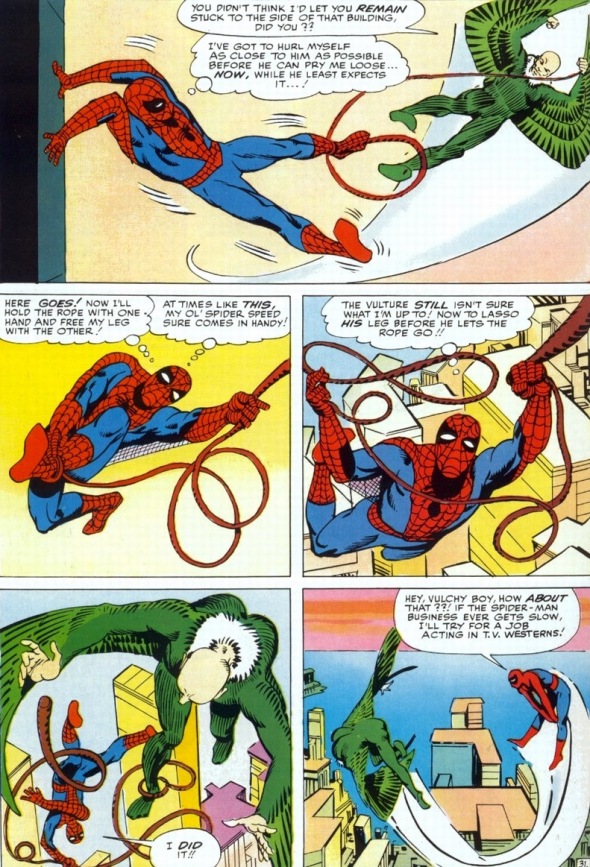 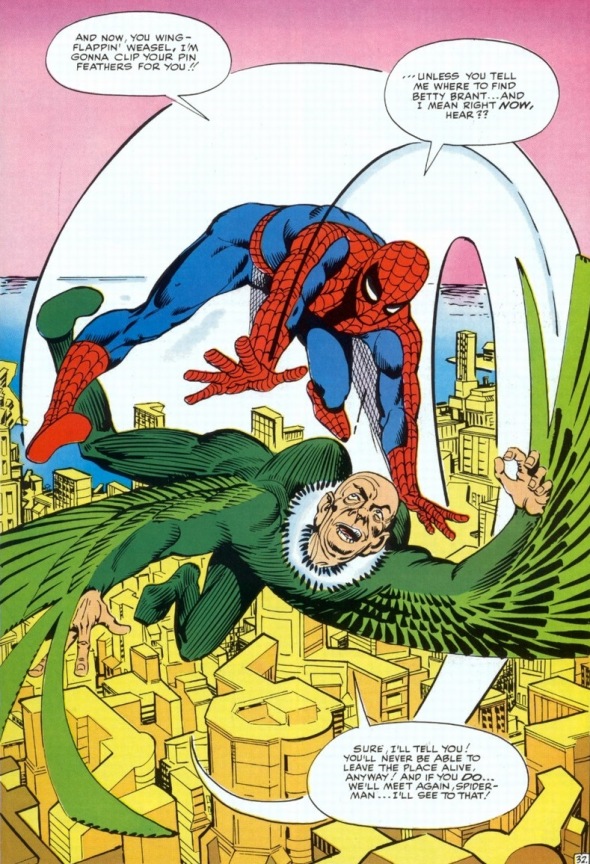 No one tell Vulture that an old man in a bird costume doesn’t classify him as “the most dangerous of all.”  Also, add spider-lassoing to Spider-Man’s set of skills.  The 1960s were really a wonderfully silly times for comics.  Now while Spider-Man obeyed the conditions of the fight, Batman would have just slammed Vulture’s head into the sidewalk until he talked.  Different strokes and whatnot. 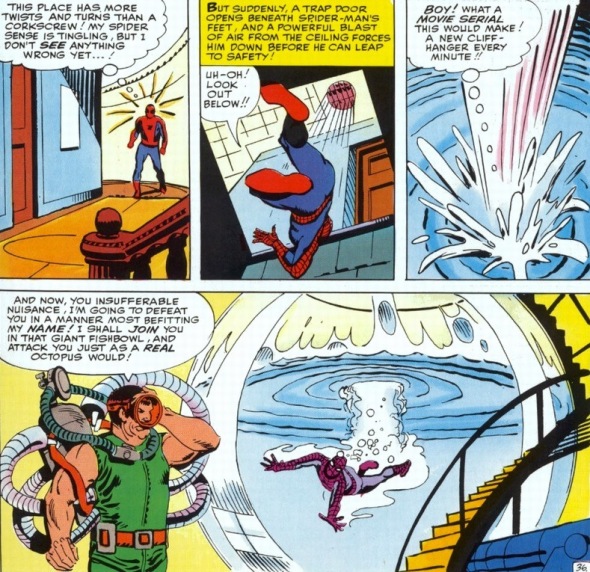 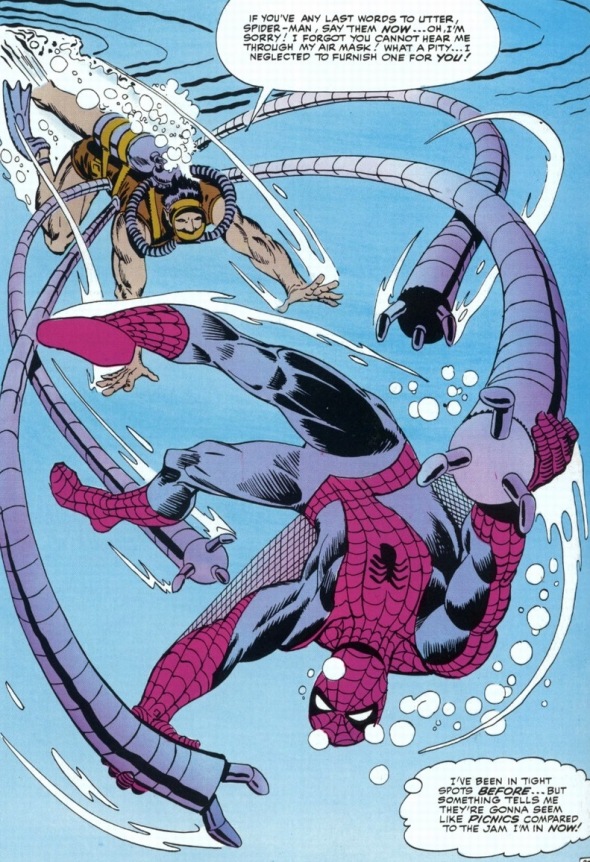 Oh yeah, and Aunt May declares Doc Ock a gentleman.  Sure, he kidnapped two women to lure Spider-Man to his death, but he minded his P’s and Q’s around the ladies.  I realize a more effective Sinister Six plan would have been to sic the whole team on Spider-Man all at once, but this way ups the drama.  Remember next month to see how Doc Ock Spider-Man deals with his old team.  If I were to guess, he’ll probably use webs and punches. 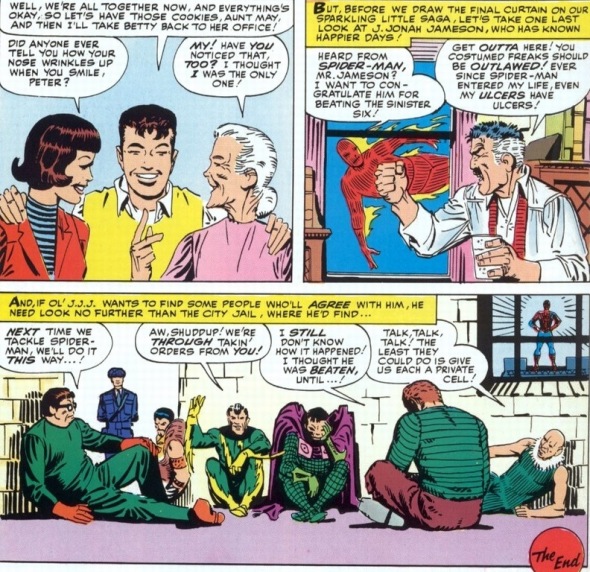 One Comment on “Spider-Man and the first Sinister Six”