That’s not entirely accurate — I’m stretching the truth to shamelessly attract more interest.  We’ll be talking about the DC supervillain, as the store Blockbuster got taken down years ago by that superhero Capitalism.  But today’s article deals with the climax of a story building up for just about ninety issues.  Oh, and Blockbuster gets killed.

So back in the mid-1990s, Nightwing (the first Robin, Dick Grayson) decides to set up shop in Gotham City’s neighbor Blüdhaven.  Same crime-ridden city with far less Bat people running around. But like always when a superhero finally becomes content in their life and just in reach of that elusive happiness they so desperately deserve, that inevitably triggers the spiral towards tear-soaked despair. We’ll see parts of that (and a bunch of kicking) in Nightwing #89 and #92-93, written by Devin Grayson and drawn by Patrick Zircher & Manuel Garcia.

Keep in mind, this deadly blast follows Blockbuster’s previous actions (Barbara Gordon breaking up with Grayson and his circus burning up).  Once you start kicking a superhero when he or she’s down, you can never stop.  That’s when they get up and break your face.  Here’s some more explosion aftermath to further build your hatred of Nightwing’s current arch-nemesis. 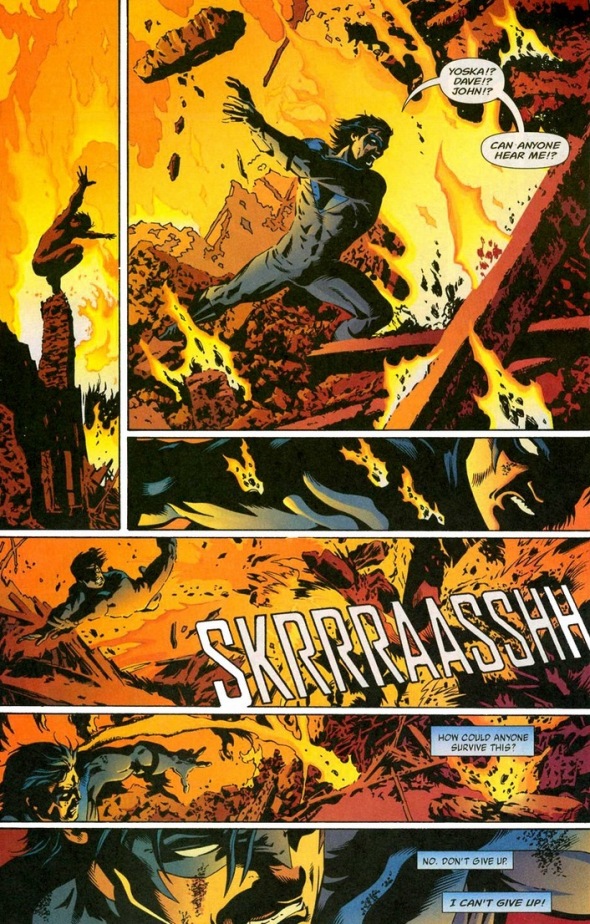 You see the dirt and grime smeared on our hero?  I don’t think he bathes once until this arc finishes. Not even a paper towel in the mirror or anything.  The Bat family doesn’t react well to deaths they indirectly cause, but at least we get to see Nightwing defeat one of his most dangerous and powerful foes: the media. 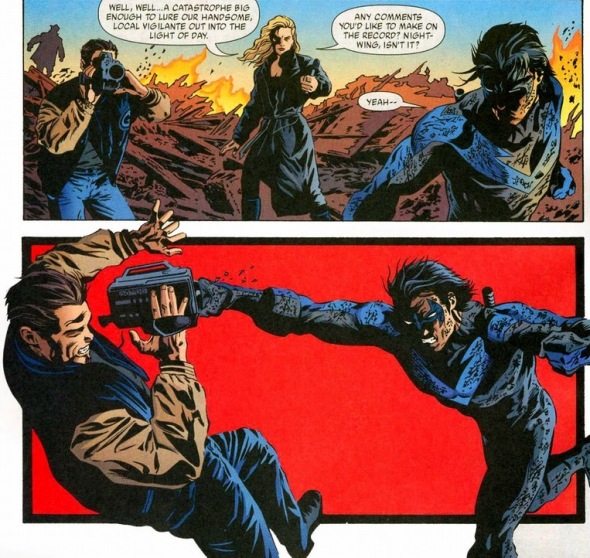 As a solution to the Blockbuster problem must now be found (as mob bosses tend to be vindictive and resilient), Grayson and his crimefighting partner Tarantula brainstorm some ideas.  Philosophical ideas.  Y’see, despite Grayson being more emotional and light-hearted than his mentor, every once in a while Nightwing flashes into a younger, cape-less version of Batman.  The scary, brooding, super-strict-code-of-morality-that’s-inflexible-with-no-exceptions version of Batman. 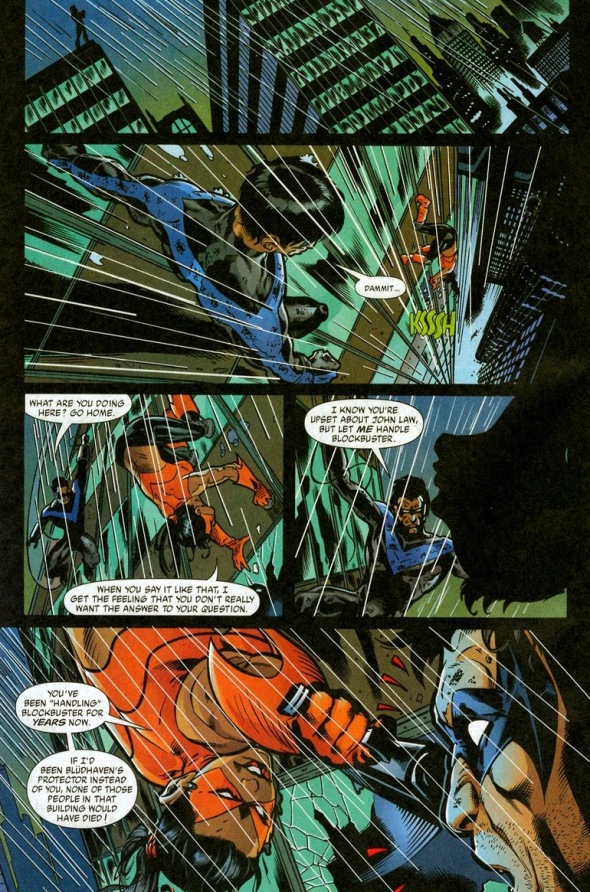 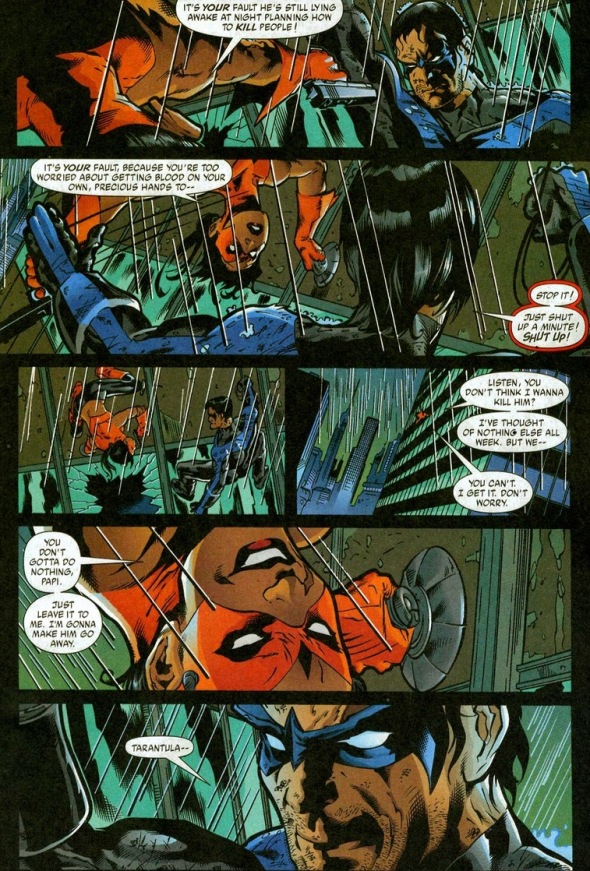 Of course Nightwing won’t kill, no matter what the title of this article says.  So much as to prevent Tarantula from offing dudes who have killed enough people to fill a basketball stadium.  I’ve thought about this before, and I have a feeling that more readers agree with the Punisher’s methods of superheroes mowing down evil than those who frown on it.  As a society, we’re taught to accept an adaptable code of morality that most superheroes do not.  Mainly because they’re fictional.  And as Blockbuster serves his final dish in this crazy destruction parade, he’s not going to inspire us to think any differently. 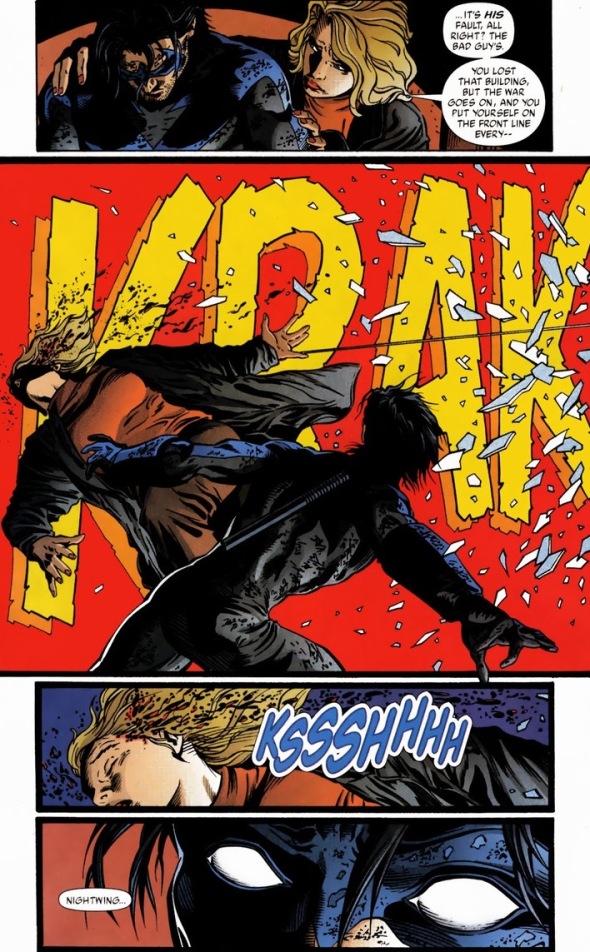 Meet Blockbuster — he has a gigantic head, a gorilla heart, and totally no conscience or soul.  If you ever need proof of why superheroes need secret identities, it’s to protect them from stuff like this happening:

Dick Grayson, despite his prodigious agility and combat ability, is a normal guy with no fancy superpowers or magic or laser eyes.  It’d essentially be a U.S. Olympic gymnast attempting to save everyone he has ever come into contact with.  Not really possible or realistic, even for a universe with superpowers, magic, and laser eyes.  That code of ethics that Nightwing so desperately clings to comes into question. 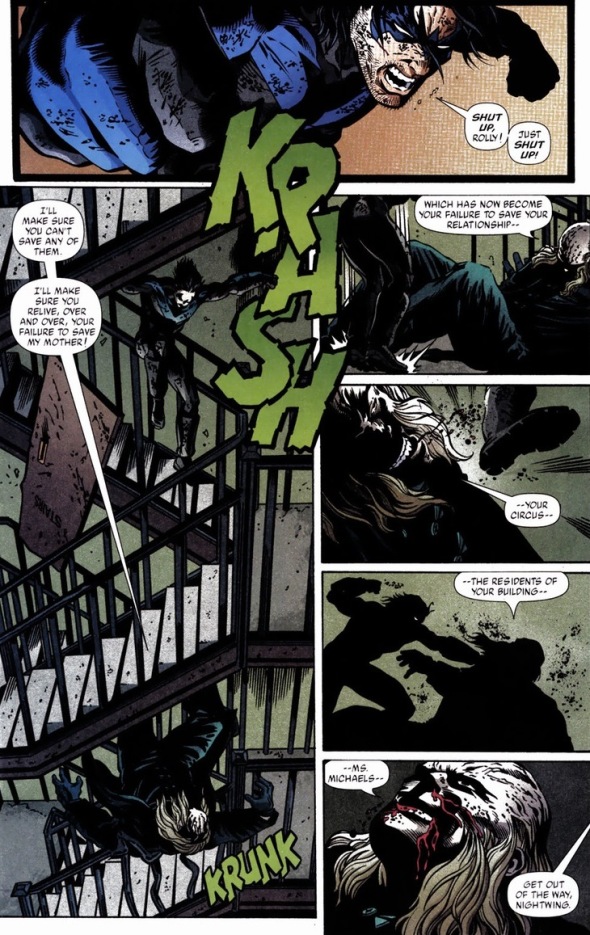 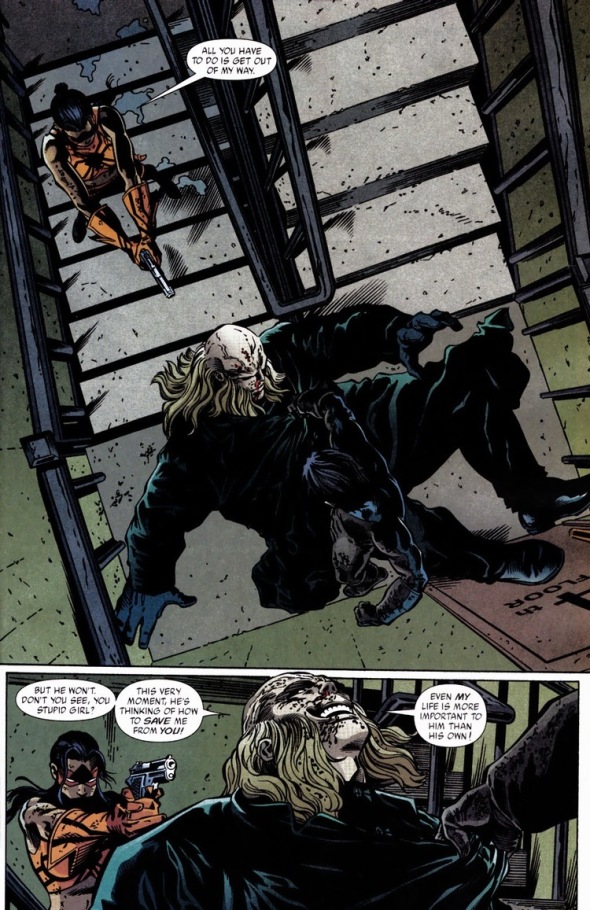 Nightwing doesn’t kill Blockbuster.  But he does something just as egregious.  Despite it being the best possible option.  Despite it ultimately saving hundreds of lives.  Superheroes always win the fight, but never their guilt — though Nightwing’ll sure as hell try. 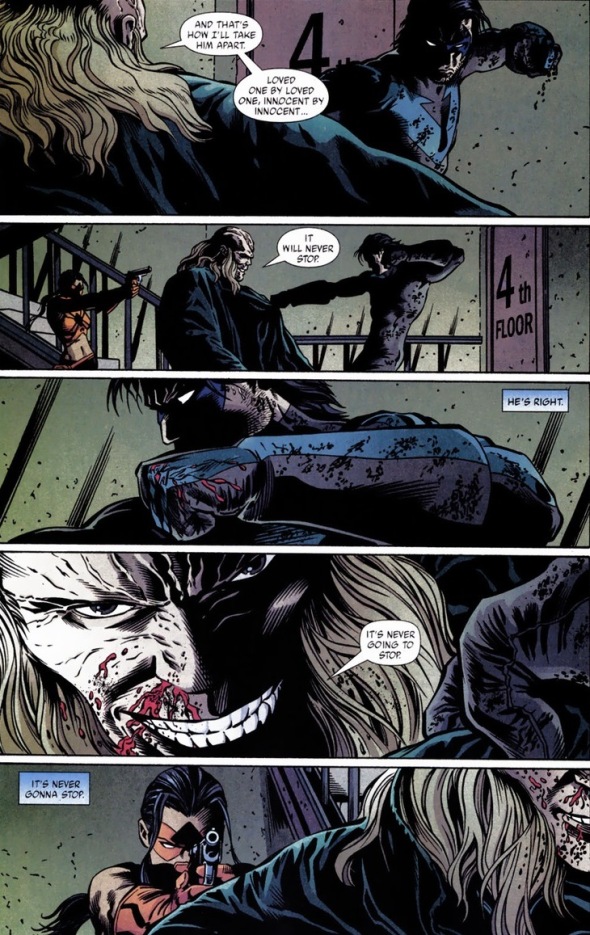 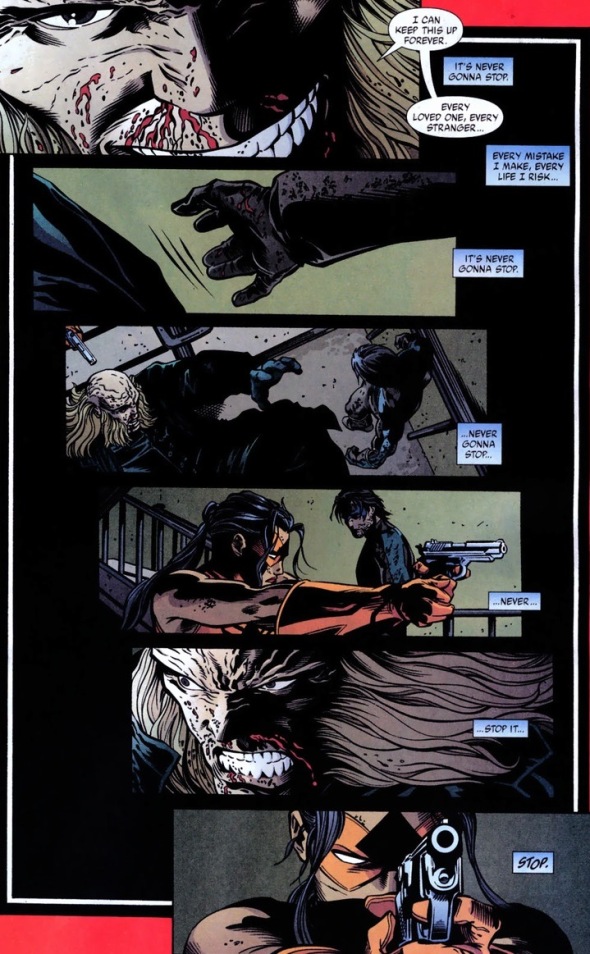 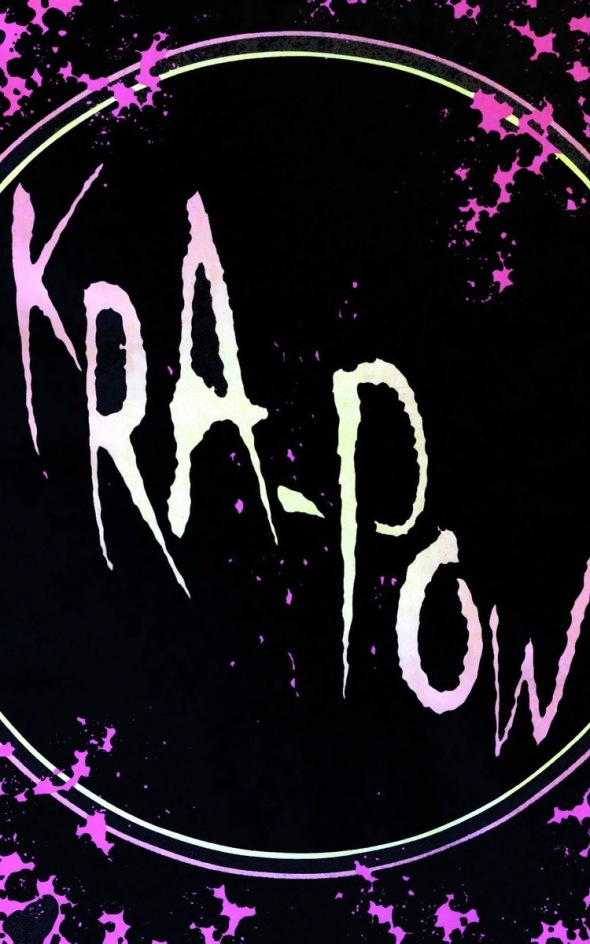 After this scene, Tarantula rapes Nightwing.  Not a joke.  She takes advantage of him in his traumatic state.  It’s one of the strangest and most frustrating scenes in DC comic history.  I personally hate it and I’m not going to show it to you, but you do deserve to know that it happens.  We’ll cover Nightwing’s reveal to Batman and his emotional healing from his own personal betrayal on Wednesday.  Next time, Grayson battles Firefly!