← The adventures of Sportsmaster
Nothing romantic about Harley Quinn & Joker →

That’s the real name of a supervillain — Sportsmaster.  He’s been around since the 40s, and really the only decade he could have possibly been invented during.  Here’s one of his earliest appearances in Green Lantern #28, volume one:

So it’s like if Olympic athletes decided to fight superheroes using only equipment currently in their hotel room.  The Sportsmaster’s ego truly amazes me, especially when he’s talking trash and waving around a tennis racket against Green Lantern, who has a weapon that makes literally anything the user wants with enough force to bring down Superman-level supervillains.

Today, we’re focusing on the second Sportsmaster — oh yes, more than one of these guys have existed.  In JSA Classified #26-27, written by Frank Tieri and drawn by Matt Haley & Gordon Purcell, our featured bad guy Sportsmaster (real name Victor Gover) gets to brawl with Wildcat (real name Ted Grant), who possesses all the superpowers of a 60 year-old boxer.  But first, let Wildcat reminisce: 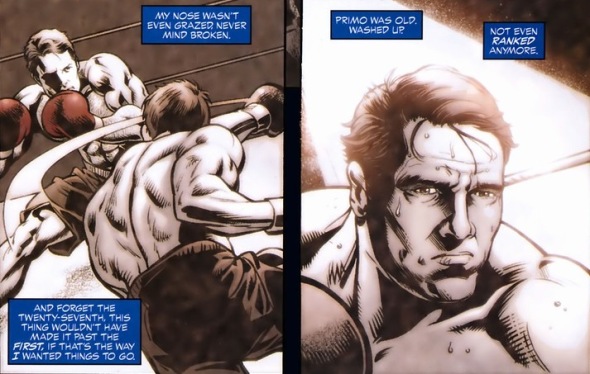 I’d like to build up this battle as a thrilling back-and-forth as the Justice Society-er Wildcat scraps with the agile hockey stick-wielding Sportsmaster, but even a comic book reader’s suspension of disbelief only goes so far.  Wildcat beats the ever-loving crap out of Gover. 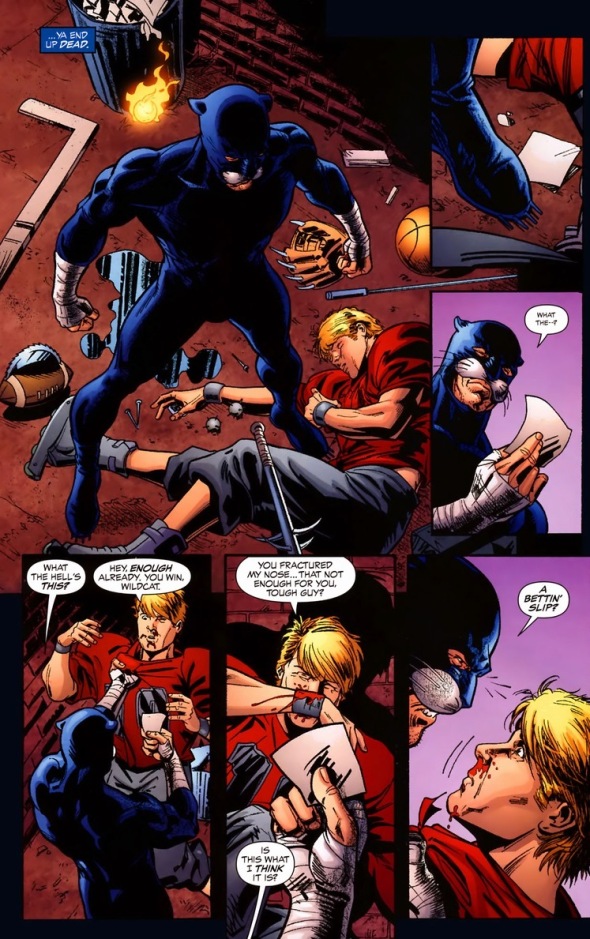 Though Wildcat savagely crushed Sportsmaster’s bones and spirit, he did it out of tough love, y’know? Sometimes, that’s the only way for a fighter to realize the truth, or else they’ll never stop making Rocky movies.  Though this mentioned superhero betting place?  Genius: 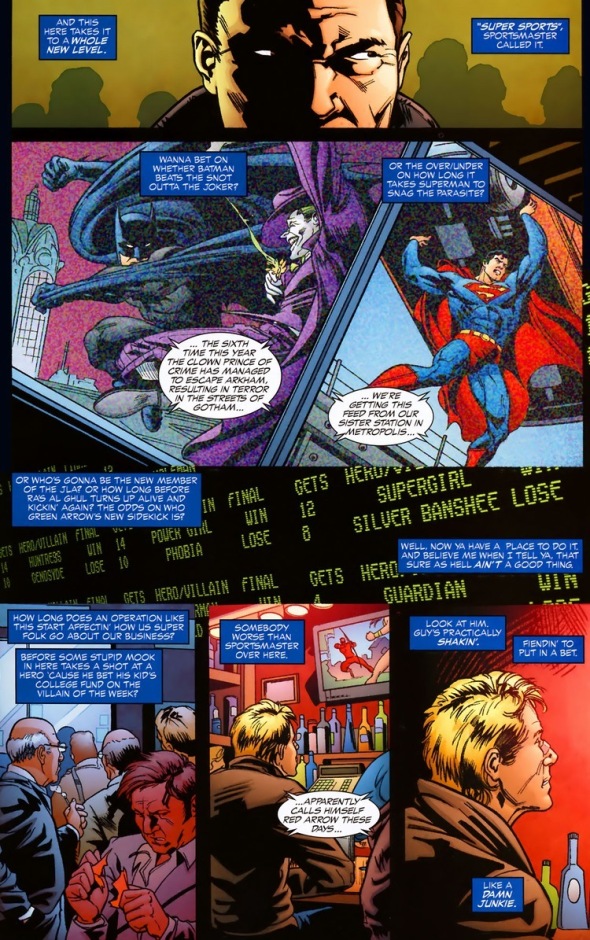 While I’m no expert on addicts, I imagine the bad behaviors continually re-surface, especially when scary mob bosses offer Sportsmaster another chance to erase all those outstanding betting debts. And I’m sorry for spoiling everything today.

Remember how Sportsmaster lost horrifically to an elderly man with no superpowers wearing a cat costume?  Now he gets to do the same thing, just against Hourman, Mr. Terrific, Power Girl, Damage, and the Flash.  It must be a helluva trump card held by Joe the Slob, because exploding soccer balls won’t even scratch Power Girl, much less the other four powerhouses. 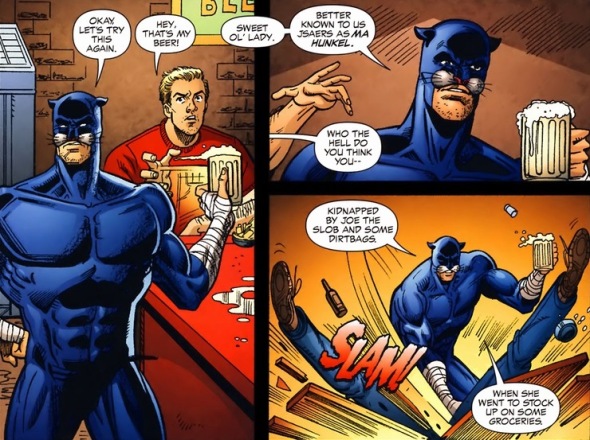 Ma Hunkel’s an old woman serving as the JSA’s Alfred Pennyworth-figure.  So now the JSA has to either throw the match or lose their dear chef.

There seems to be a trend in supervillains that the fewer powers one has, the more arrogant one acts. I imagine mainly for comedic effect, but when the Flash can circle the entire planet and hit you with a punch hard enough to blast your organs across the continent before you’ve even finished your first egotistical sentence — why all the cockiness?  Trump card aside, Sportsmaster should at least shake hands and thank the JSA for their participation.  Y’know, or else this could happen: 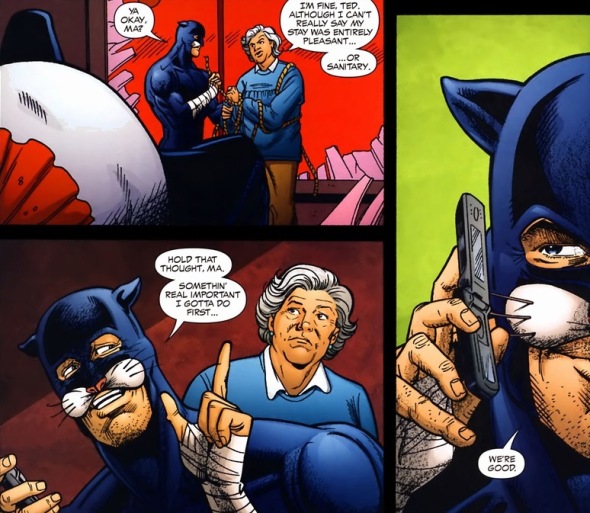 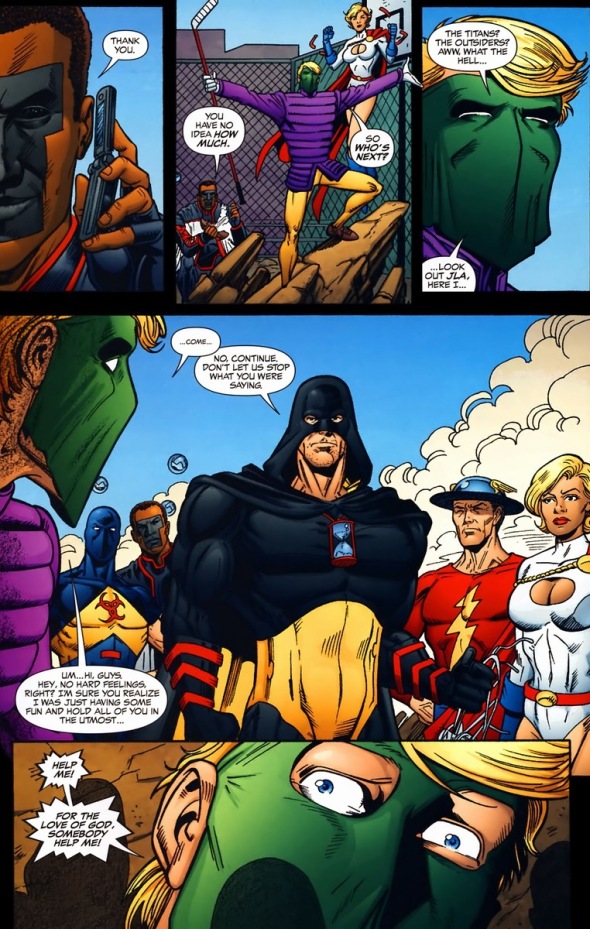 Poor Sportsmaster just realized that superhero problems tend to get solved with violence rather than a discussion or vote.  It’s the default problem solver for those that wear spandex and capes.  One doesn’t spend a decade learning martial arts and crafting their twelve-pack abs to simply chat about their disagreements.

Hopefully this experience has been educational for Sportsmaster. 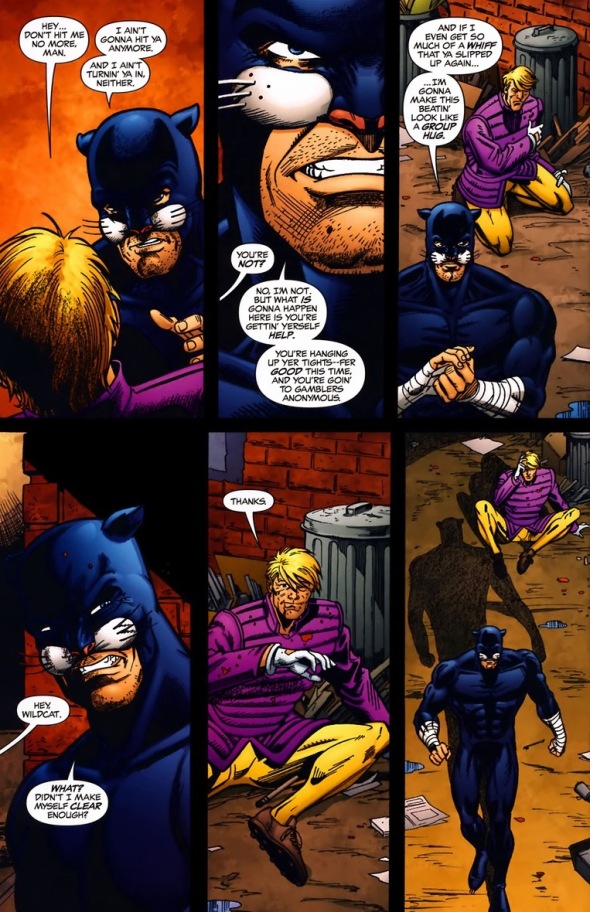 I admire Wildcat’s brand of tough love.  He takes the Batman method of pounding opponents until they’re human goo, then threatening them to go straight or next time he’ll batarang their spine.  Gover never shows up again, but he does get to be a permanent mark in the win category for Wildcat, sadly living in a world plagued by the ever repeating status quo.