Hey, remember this super depressing scene from the ’90s when Patsy Walker killed herself? 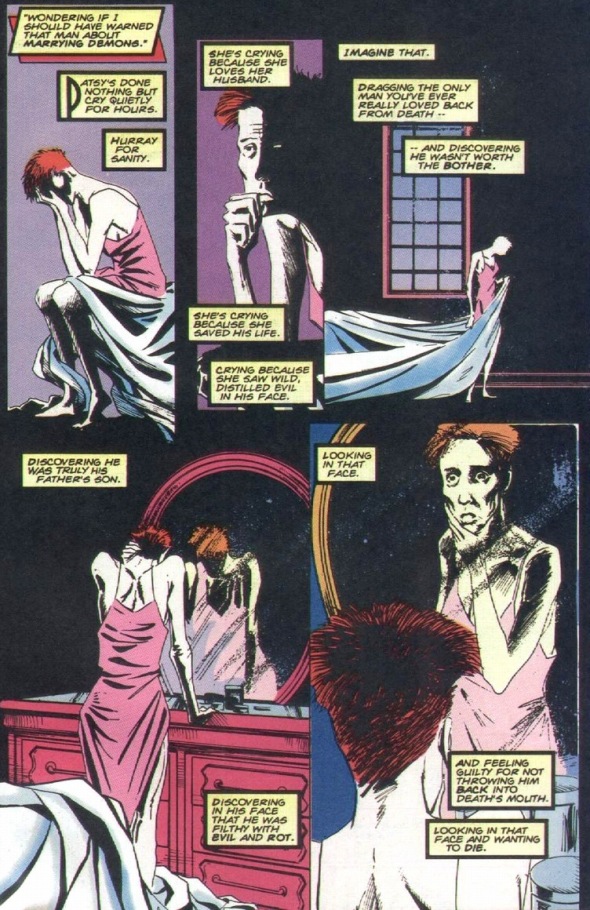 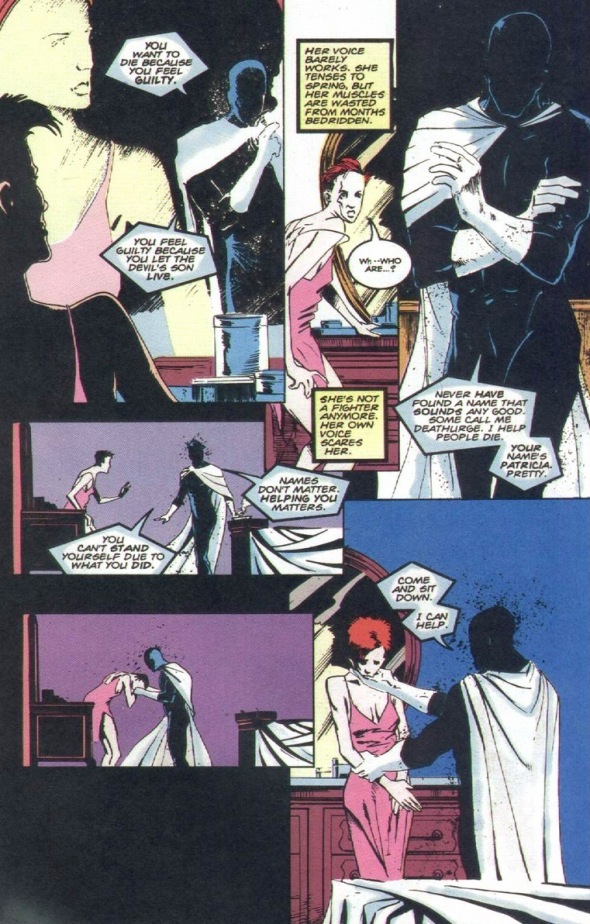 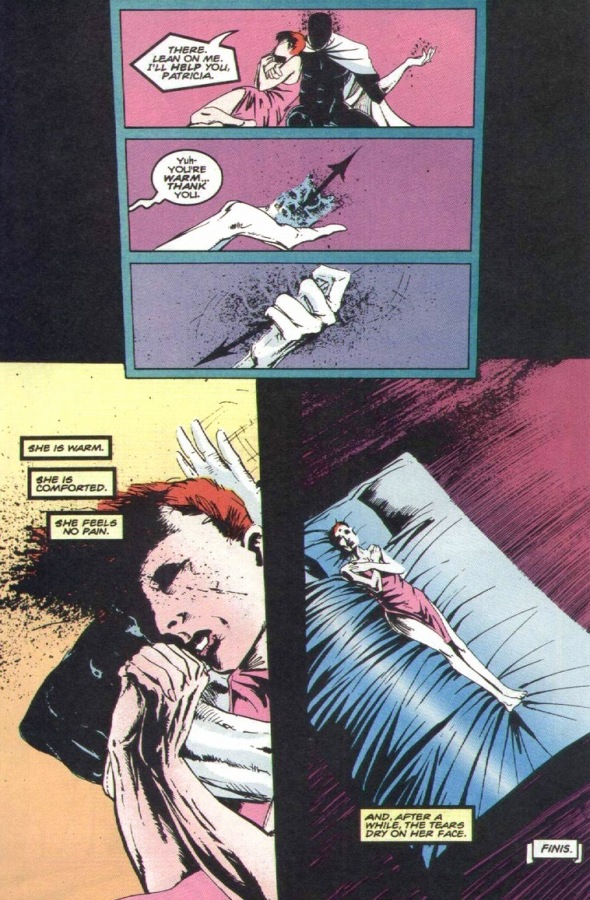 That’s from Hellstorm: Prince of Lies #14, written by Warren Ellis and drawn by Peter Gross.  Turns out Walker shouldn’t have married a demon, because y’know, they tend to do a bunch of evil stuff. Not a trustworthy group, the hell-dwellers.  Except besides those few sad years in the early ’90s, Walker, a former soap opera comic star turned superhero Hellcat, has pretty much been a positive, fierce, and wonderful role model for female comic book readers.  Or if not in the past, at least since Thunderbolts Annual 2000, written by Fabian Nicieza & Norm Breyfogle and drawn by Kurt Busiek, when Hawkeye (tricked by Hellcat’s ex-husband Daimon Hellstrom — not Hellstorm) rescues her from her eternal damnation. 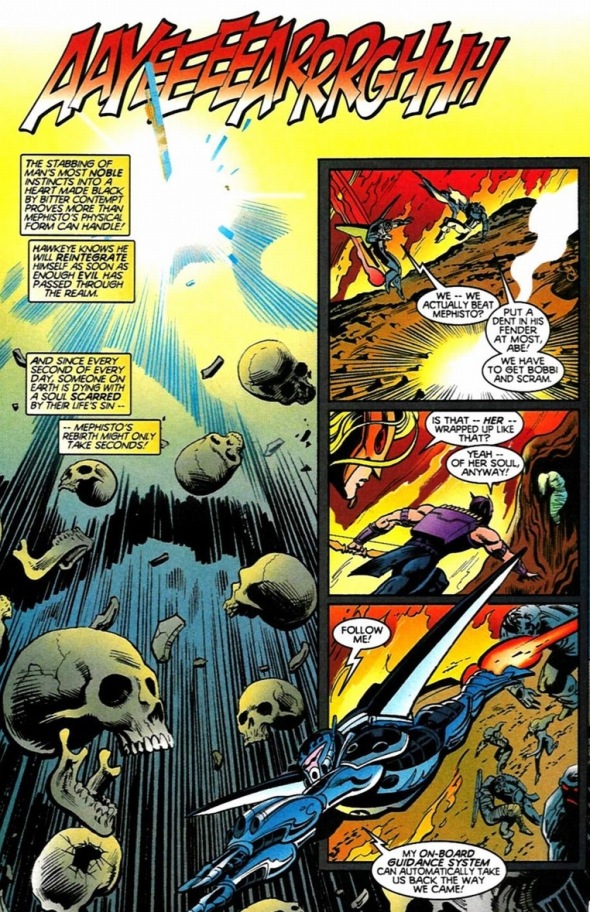 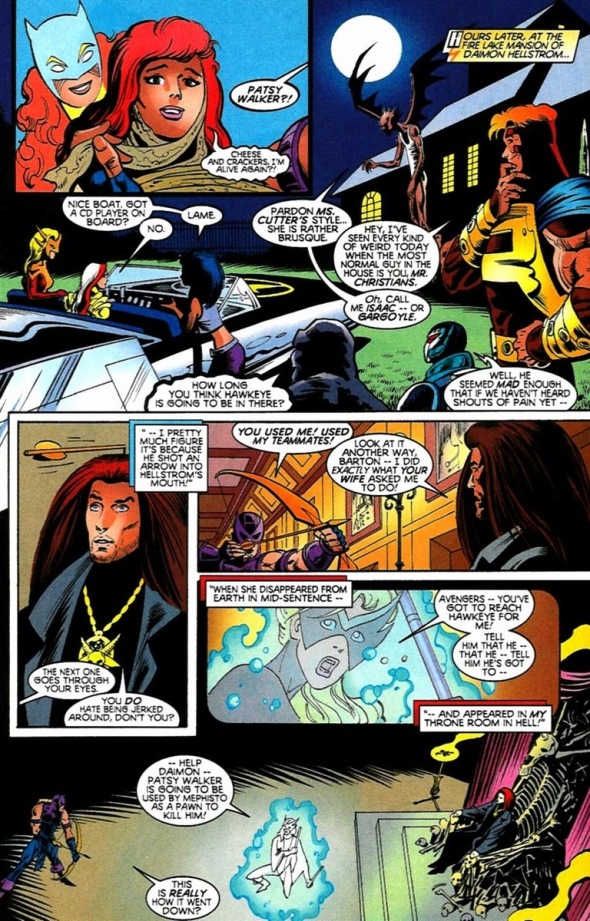 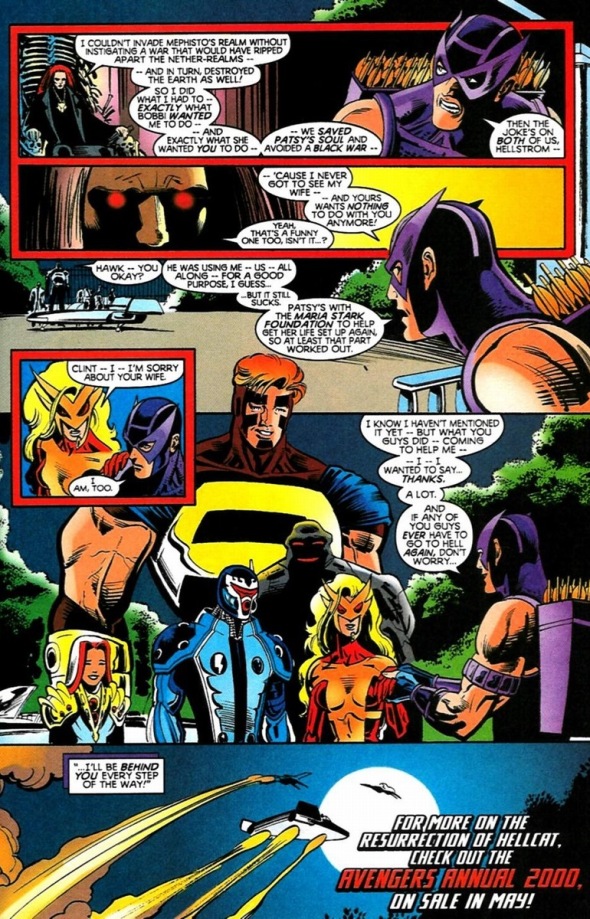 Bobbi Morse, the superhero Mockingbird who also died in the early ’90s, happens to be battling demons down in Hell alongside Hellcat.  Though poor Mockingbird has to wait nine more years before she returns to the land of the living.  While Avengers Annual 2000, written by Busiek and drawn by Breyfogle, contains a good forty pages of Hellcat adventures, it’s the beginning I really want to show you.  To get you caught up, they included the complete history of our heroine complete with annotations: 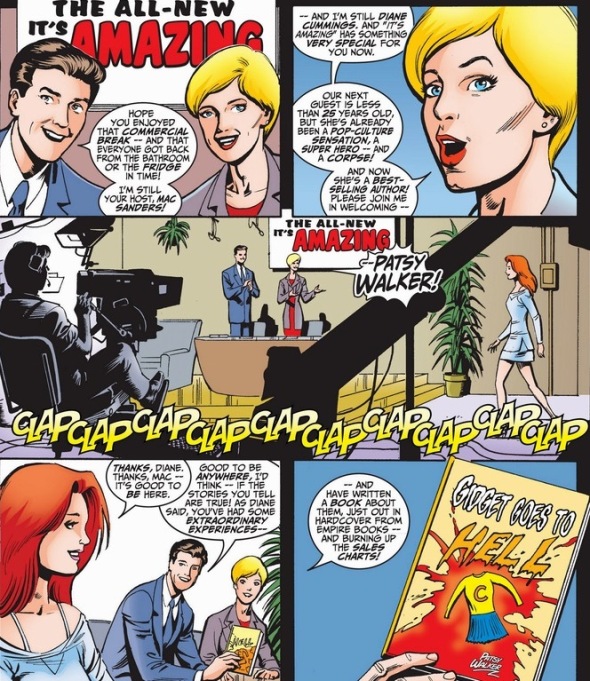 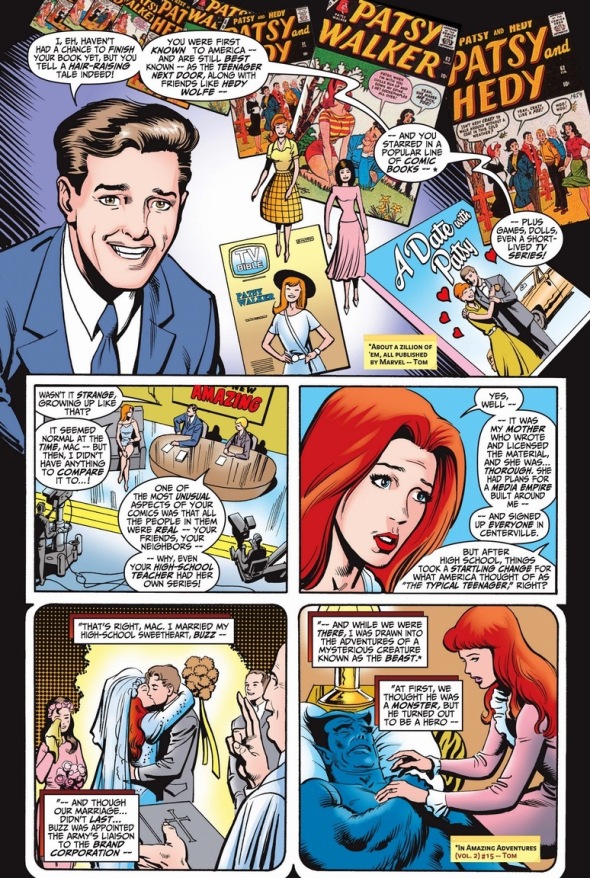 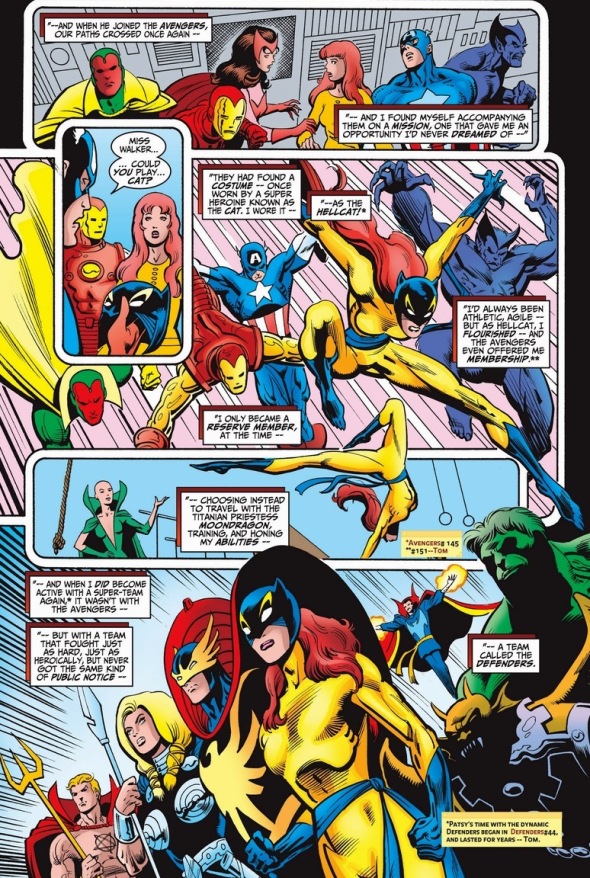 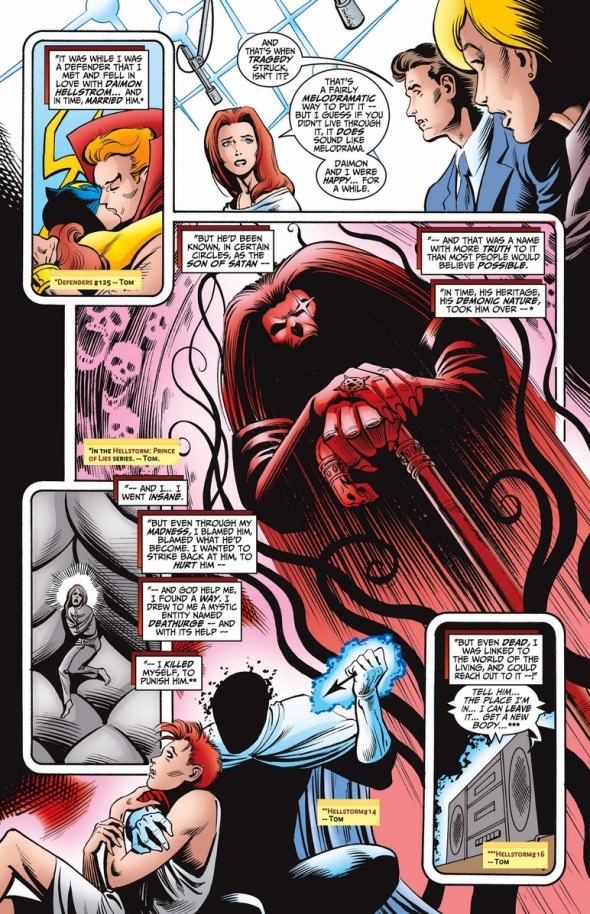 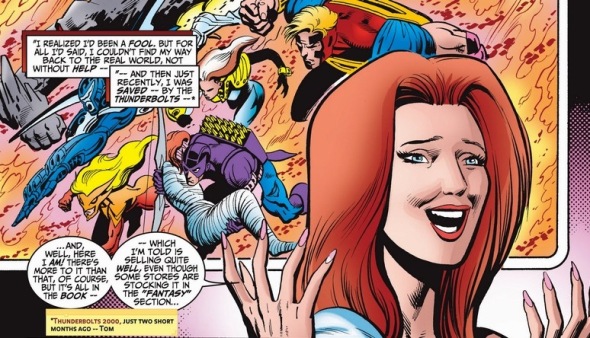 If you want to talk about character progression and growth, you can’t find anyone better qualified than dear Patsy Walker.  Starring originally in teenage drama comics, she became a superhero, then the fearless wanderer of the demonic afterworld.  And thank goodness for that last part especially, because in the miniseries Hellcat #1-3, written by Steve Englehart and drawn by Breyfogle, she gets warped right back to her home she spent as punishment for her suicide.  Sin’s still sin in the Marvel world, even under the influence of a horrifically bad marriage and uncontrollable insanity.  She really shouldn’t have married a man who’s affectionately known as the Son of Satan. 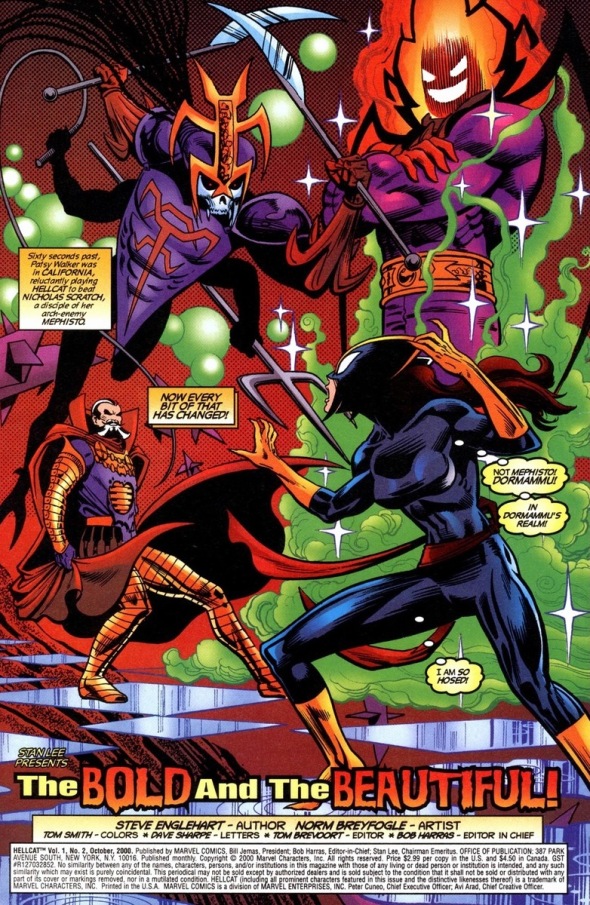 For scale of just how bad her situation is, she’s under attack by Dormammu, a demon so powerful that Doctor Strange wets himself every time he makes an appearance.  Dormammu, the monster that the other demon lords shudder at the thought of.  So what superpowers does Hellcat have to defend herself with?  Oh, you mean she’s a normal human wearing a cat suit?

And I’m sorry for being mean to Doctor Strange, I just wanted to add some suspense. 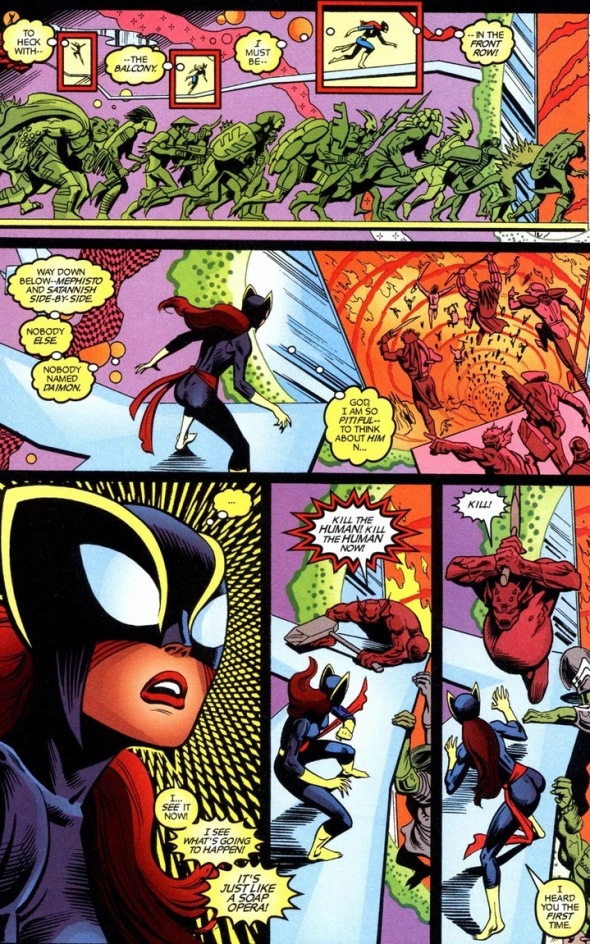 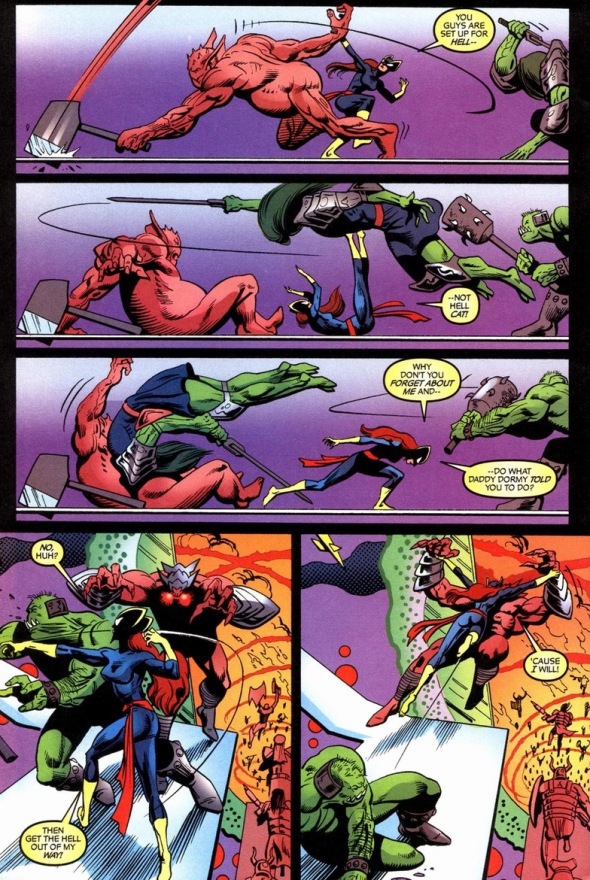 Essentially, Hellcat finds herself in the middle of a demon war.  Dormammu plans to take over the dimensions claimed by Mephisto, Pluto, Hela, and Hellcat’s ex-husband Daimon Hellstrom.  Because demons tend to be lying, manipulative, selfish creatures, Hellcat pretty much has to end this war herself.  Superheroes always get the short end of the problem solving stick. 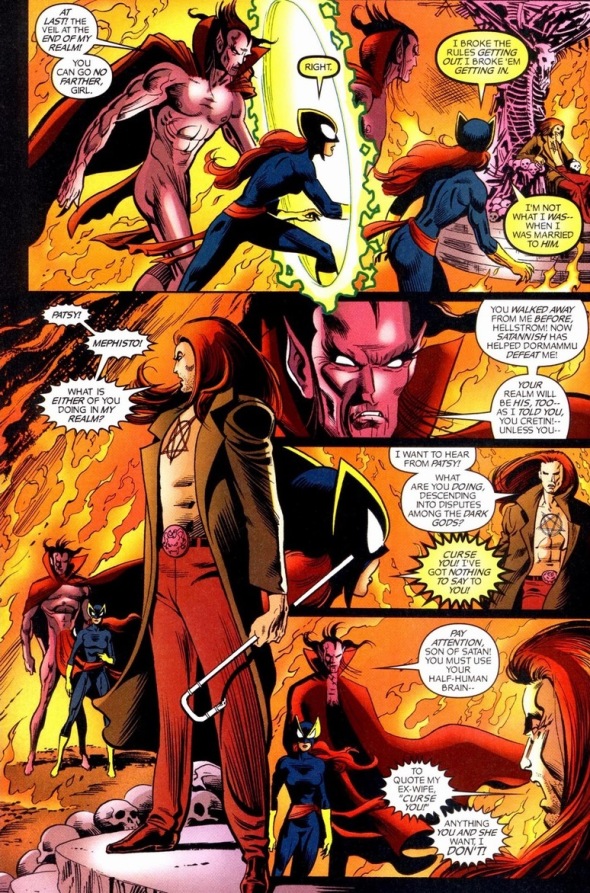 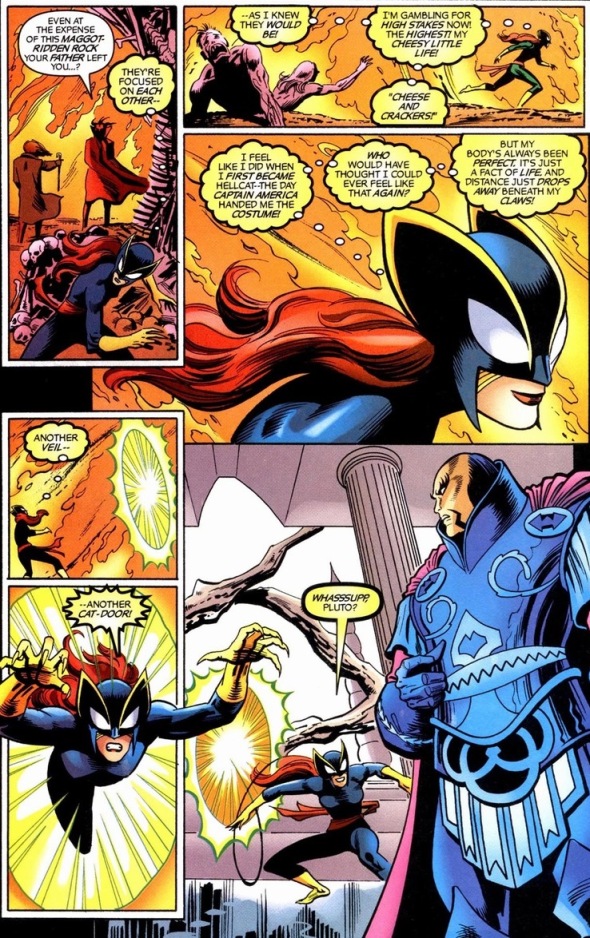 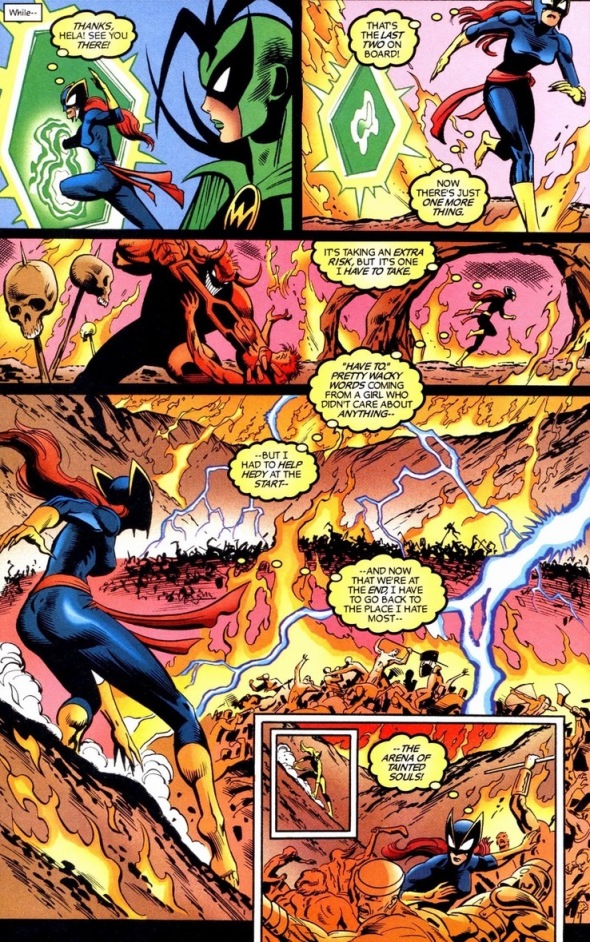 And the plan?  Good ol’ fashioned teamwork.  Well, that and the combined powers of the most powerful sorcerers that Hell has ever produced. 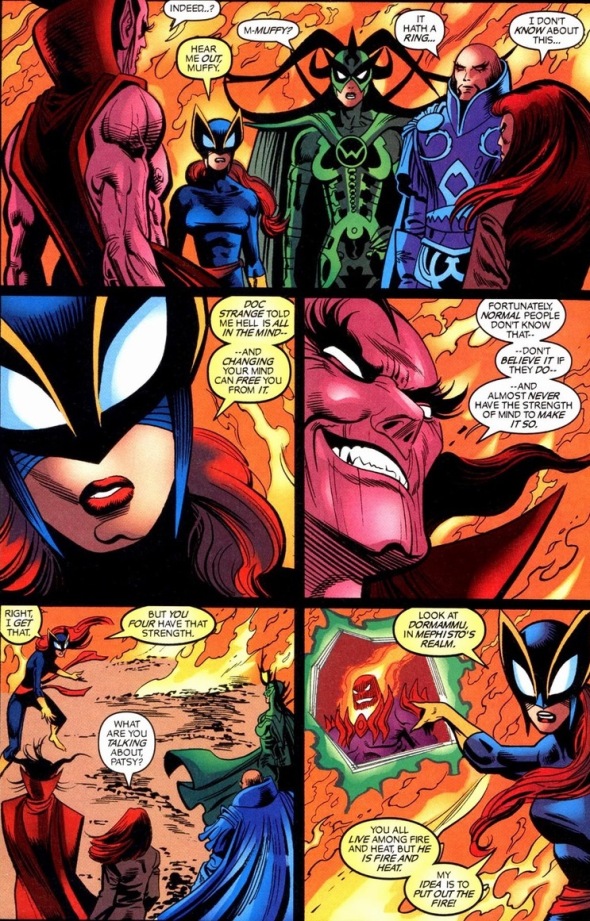 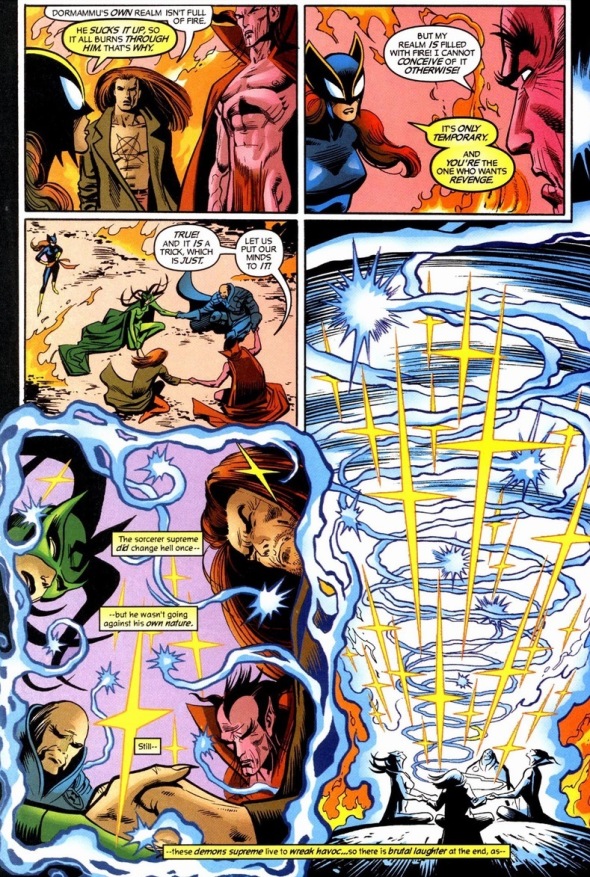 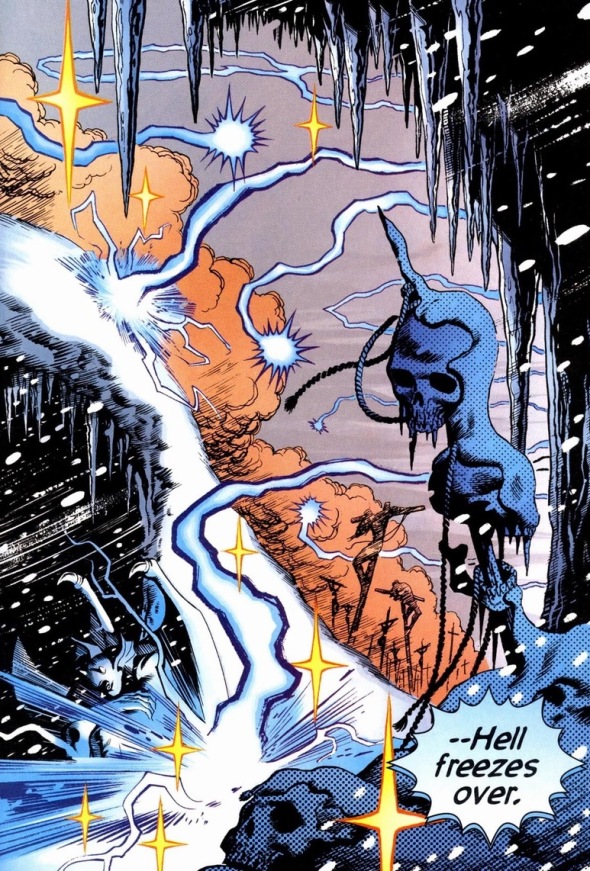 To reward her bravery and intelligence, Mephisto and the others grant her safe passage home.  I’m kidding — she has to truthbomb her way out of Hell before Mephisto chains her up like slave Leia in Jabba’s Palace.  Demons don’t understand gratitude. 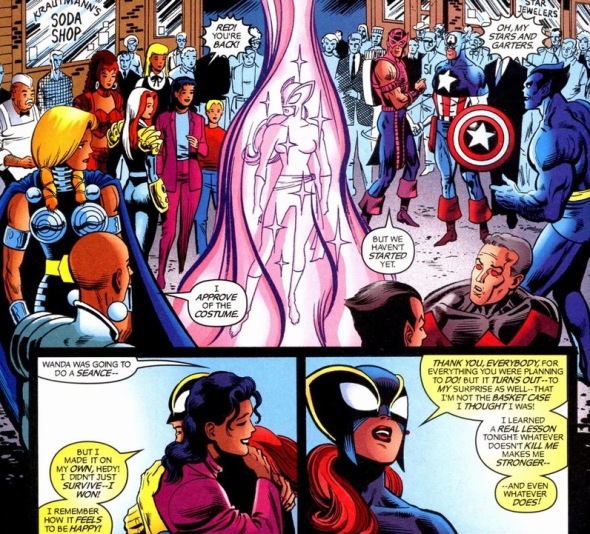 We’ll stop here today.  I have a good fifteen pages and four hundred-ish more words left to show you, but by asking around, I’ve learned over the past 300 articles that people usually don’t have the time to read articles that require scrolling the length of Wolverine’s back hair (long).  Those spreadsheets won’t fill themselves out, or whatever people do in offices.  Next time, more Hellcat and Daimon Hellstrom!