Since comic book characters are fictional characters, there can be many different versions of them running around at once.  Thank goodness too, because that just means more Batmen chucking batarangs at bad guys.  And so while the animated shows don’t classify as the canon stories, they still tell stories.  Good stories.  Like the romance between animated Mr. Freeze and his wife, animated Nora Fries.

The tragic origin of Mr. Freeze premiered on the cartoon and then transferred over to the comics, where if you don’t know — meaning you’re most likely my parents — Victor Fries’ wife fell into a deep illness.  To save her life, Victor cryogenically froze her.  An accident followed and Victor Fries’ body chemistry altered to only allow survival in below freezing temperatures.  Hence the suit he now wears. But in the animated world, Victor (now the supervillain Mr. Freeze) and his obsession with curing his wife comes to an end in the movie Batman & Mr. Freeze: Sub Zero, setting up a much different dynamic in future stories.  An adapted version of the film came out in comic book form in Batman & Robin Adventures: Sub Zero, written by Kelley Puckett and drawn by Joe Staton. 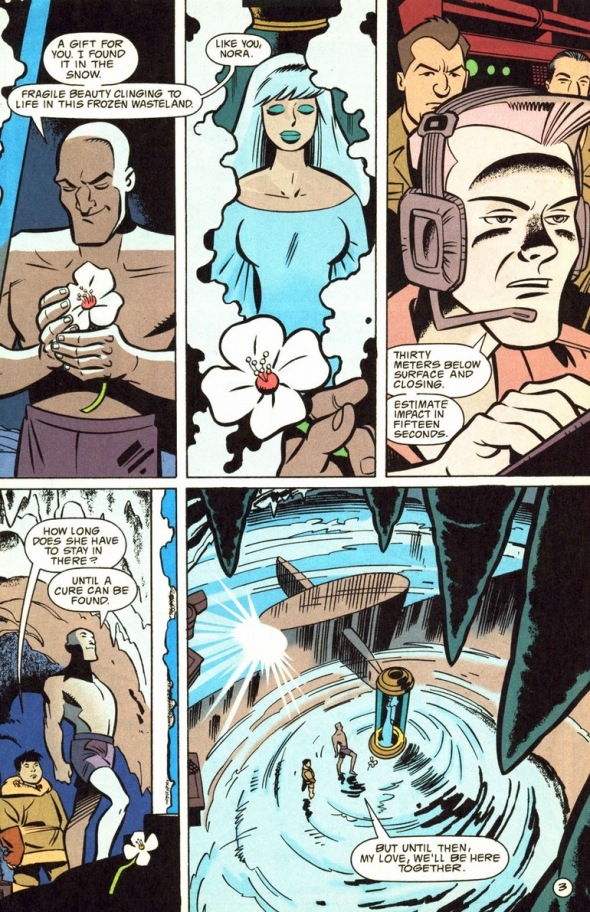 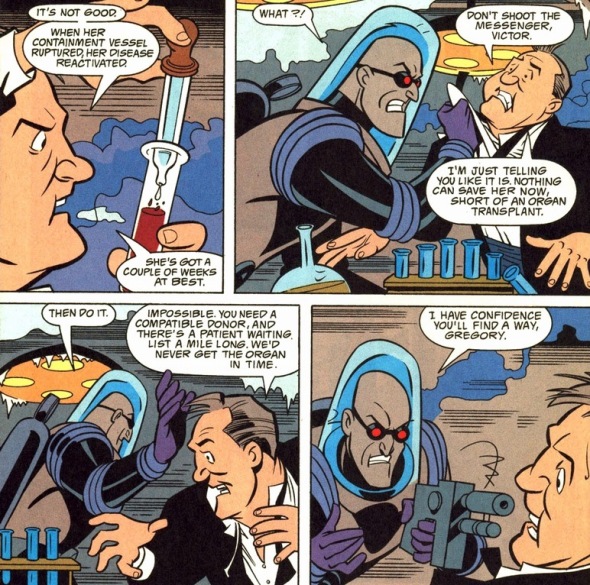 You can argue morality or ethics, but threats tend to work fairly well in the comic book world.  And while superheroes and supervillain roll through the revolving death/resurrection door like it’s a Sunday brunch, civilians don’t have that luxury.  Basically, Gregory is totally going to find an organ donor.  As I skip the entire plot and jump right to the finale, the status quo changes forever: 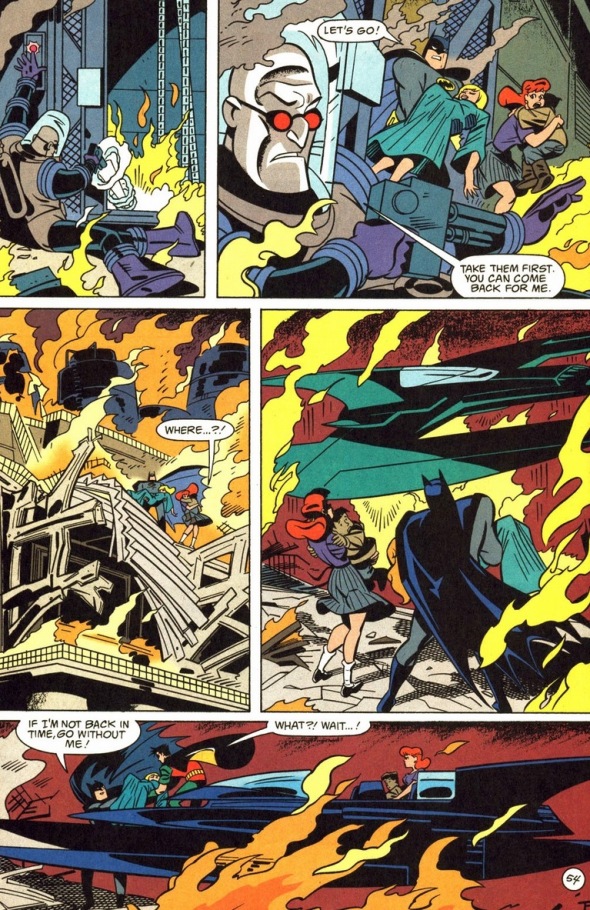 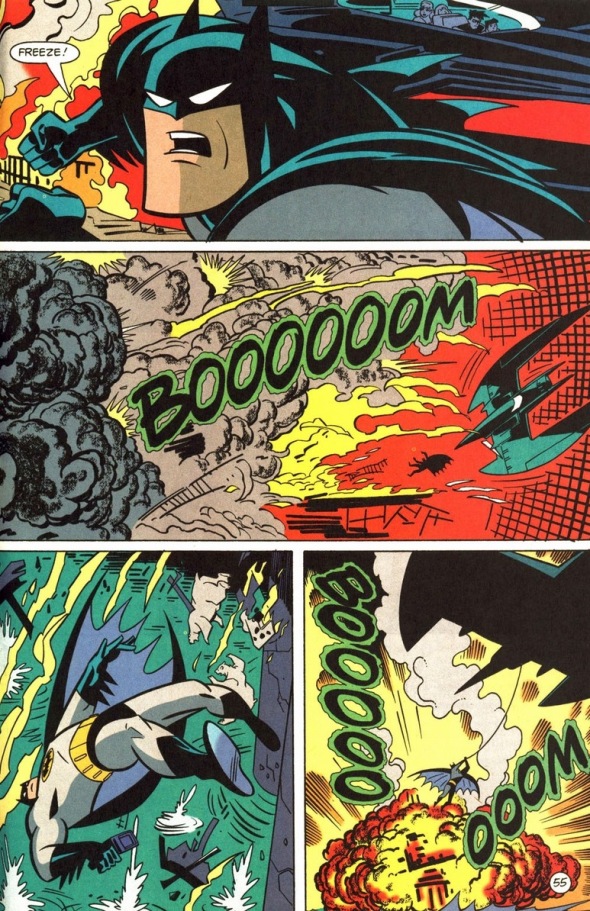 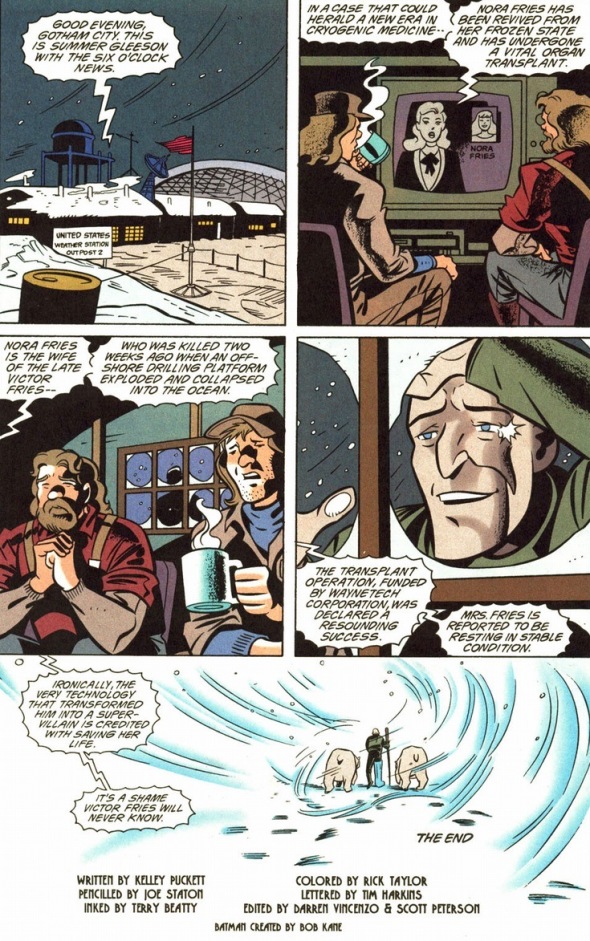 Dear Nora now walks among the living fully cured.  Though Mr. Freeze remains one of the most brilliant scientists and powerful bad guys in the DC universe, I’m more impressed he befriended two polar bears.  Off topic, but just so you know, Mr. Freeze and Nora’s relationship isn’t the only one that warmed up during the movie/comic: 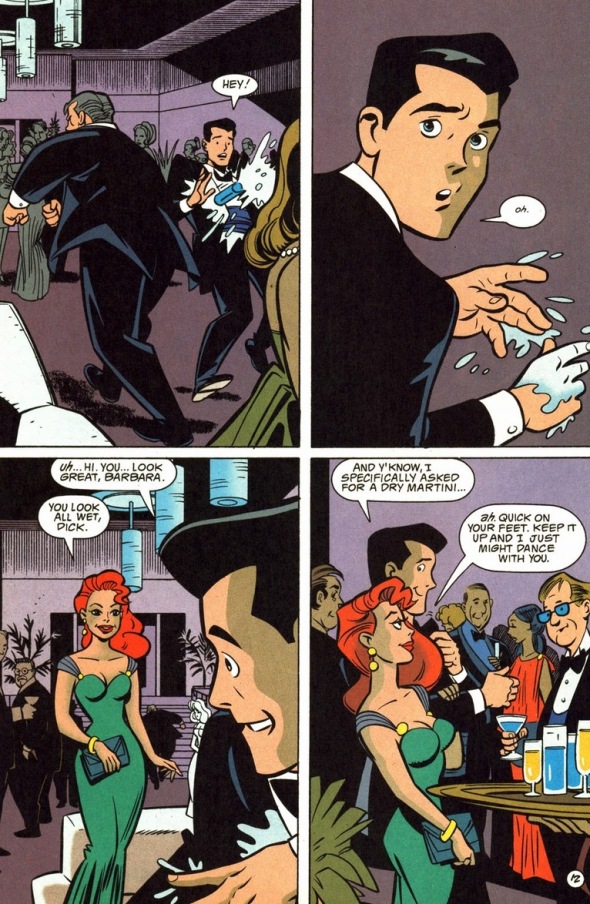 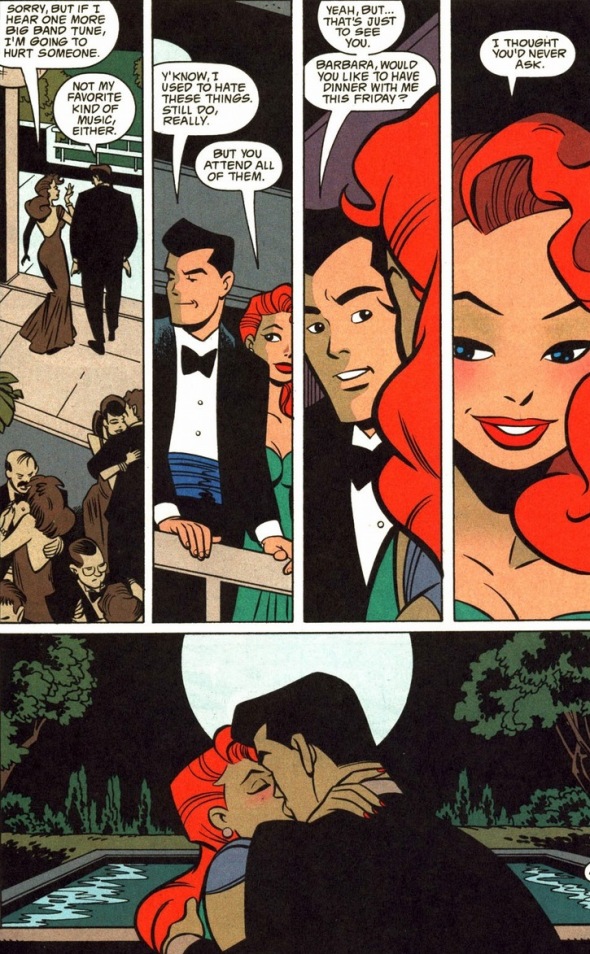 The next part of our story lies in cartoon form only.  Here’s where my stash of images can’t help you. Check out The New Batman Adventures episode “Cold Comfort” for the full version, but I’ll spoil it now if you wish to save twenty minutes (YouTube has it if you want to watch it).  So Nora totally waited for her dear Victor to return to her outstretched arms.  He did not, but his reason is valid — y’see, spending every single moment of his time searching for Nora’s cure neglected his own condition.  He was doused in experimental chemicals after all.  So now he has no body, just a head that runs around on adorable spider legs.  And to make a bad situation even worse, with no word from Victor, Nora gets sick of waiting and marries her Wayne Corp doctor instead.

We pick up soon after that in Batman: Gotham Adventures #5, written by the wonderful Ty Templeton and drawn by Rick Burchett. 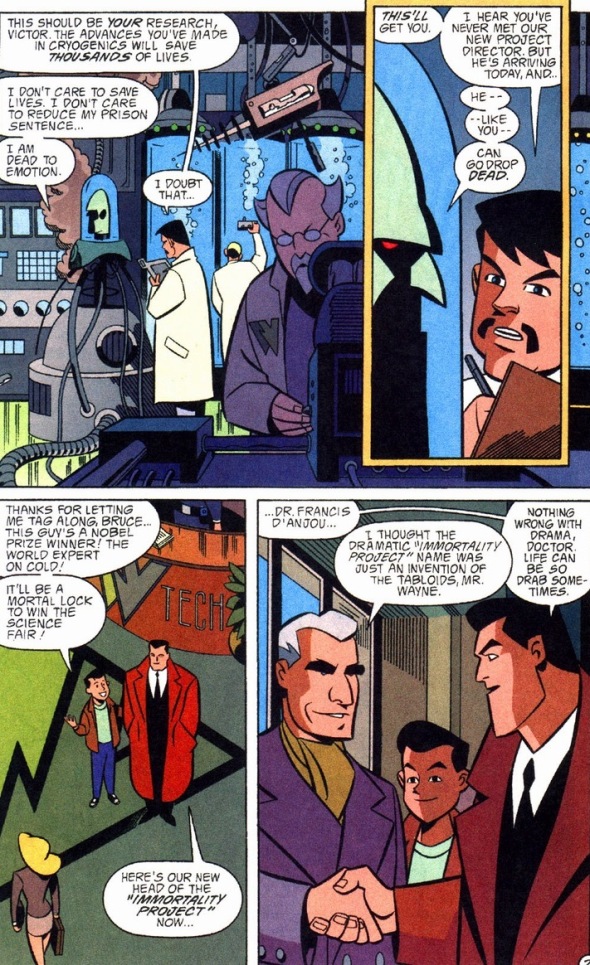 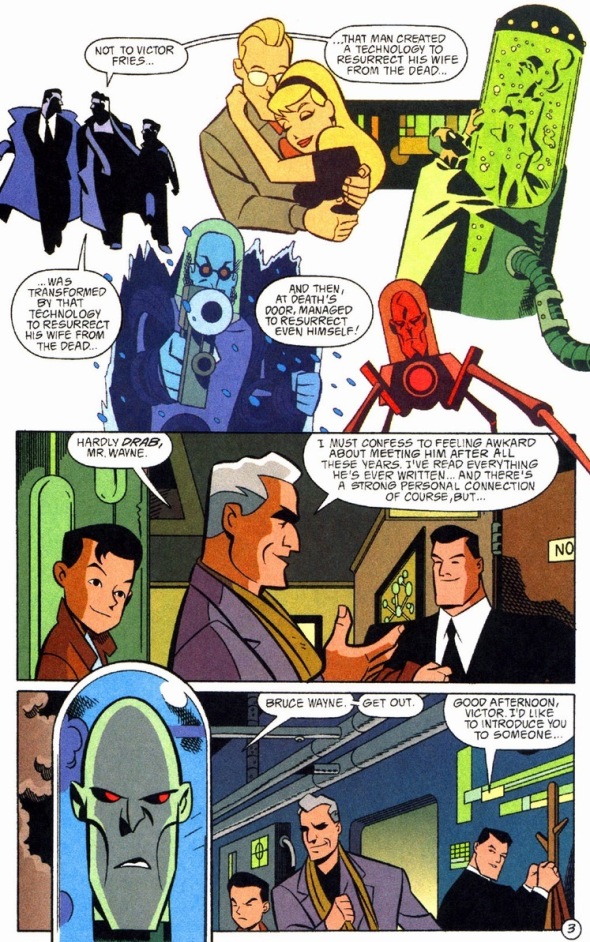 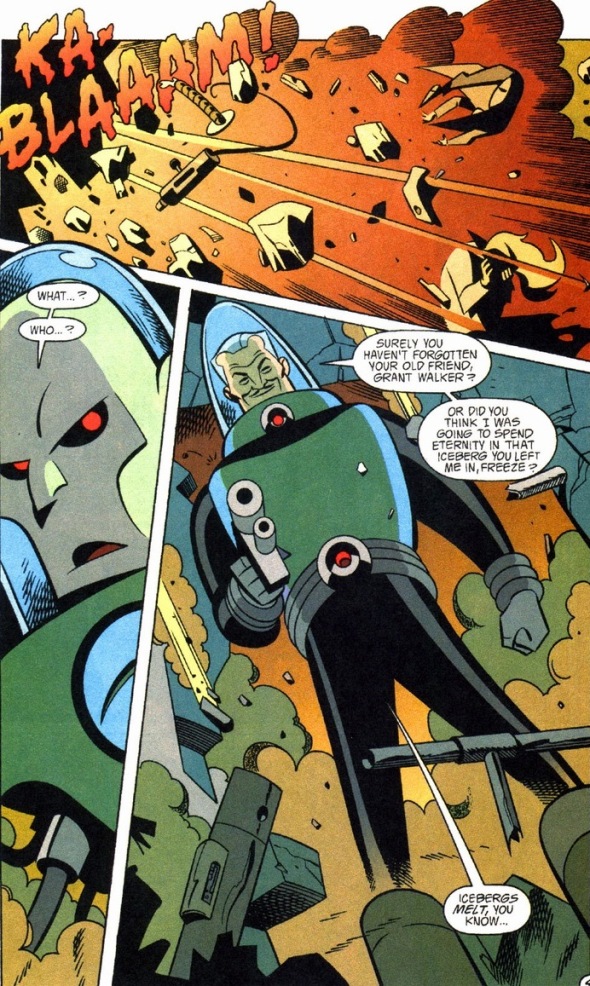 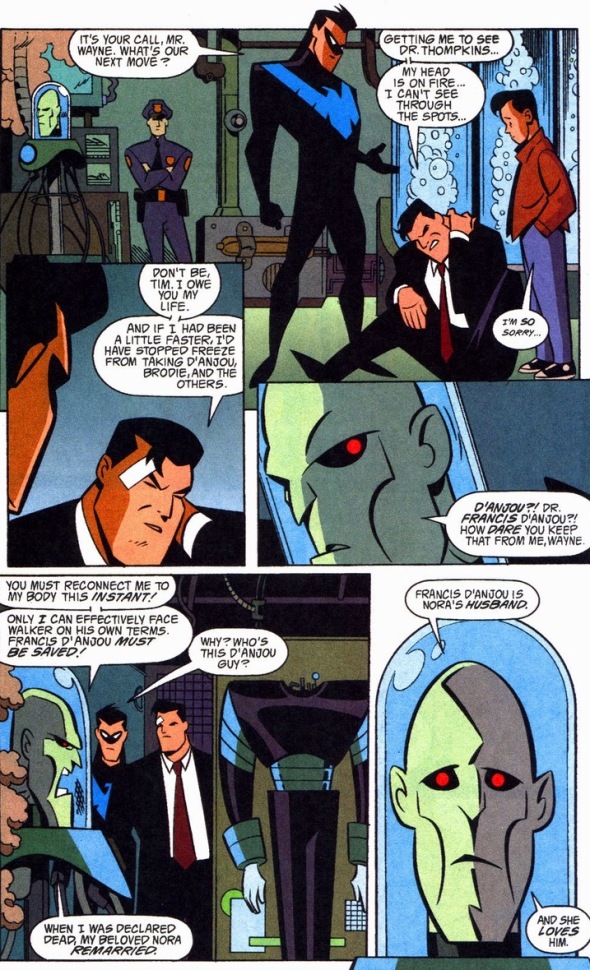 This moment melts my heart, because for all the evil and apathy that Mr. Freeze claims, it’s a selflessness that drives his love for Nora.  He doesn’t care that Nora’s happy with him — he simply cares that Nora’s happy.  It’s beautiful, and something endearing we don’t normally see in supervillains.  I mean, I don’t think the Joker wants Harley Quinn to be happy, much less happy with him.  Lex Luthor’s only love is that smug face staring back at him in the mirror.  The list goes on, though you should know that on the hero side, Supergirl once dated her horse.  That’s a DC fact Flashpoint can never erase.

Anyway, as the story above wraps up, one important detail about Victor and Nora’s relationship remains unchanged: 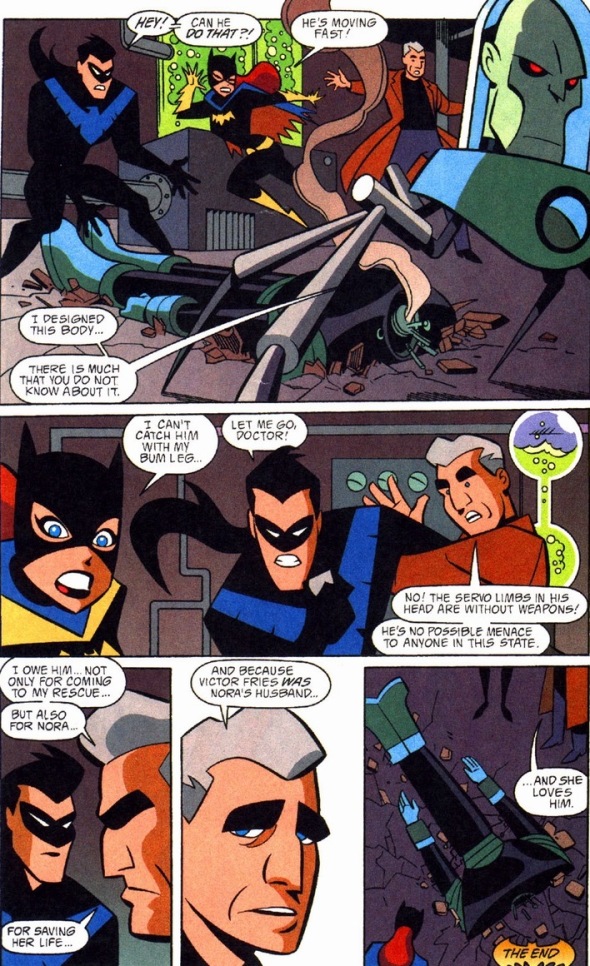 New husband with Scorsese eyebrows aside, Nora will always love Victor.  Always.  We’ll pick up with the second half of the love story next time complete with a real ending and everything.  You’ll be wiping that single tear off your cheek as you close this tab on Monday, so make sure you have a Dido CD ready for full effect.

2 Comments on “The animated love of Mr. Freeze & Nora”