Here’s a superhero topic no one has ever asked for nor desired to see.  I have chronicled every appearance the cat of Ms. Marvel has made (real name Carol Danvers, now goes by superhero name Captain Marvel), including those that only include the animal as apartment decoration (most of them). In order of chronological appearance, our dear kitty shows up in:

Chewie first appears in an alternative dimension.  You can read an older article I wrote for that whole story, but here’s the cat parts: 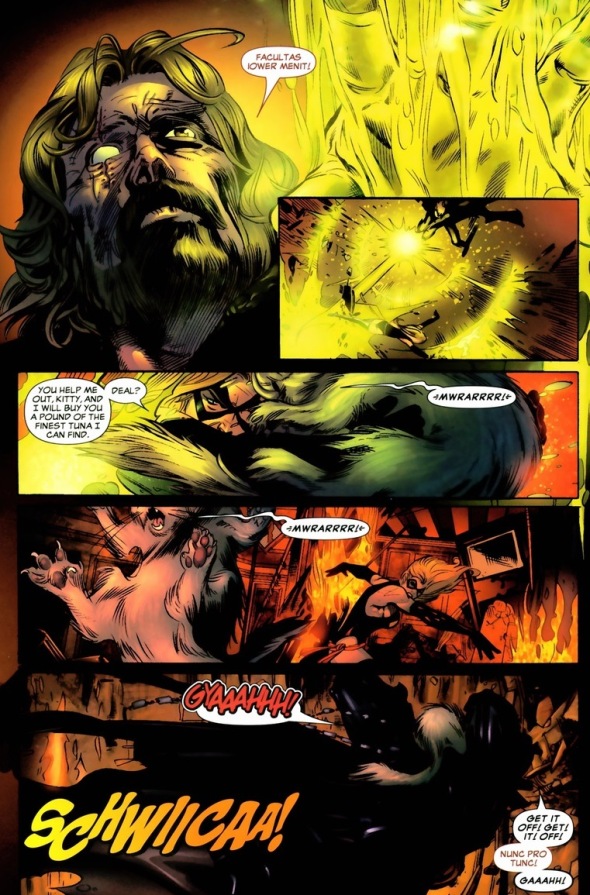 After mystical mayhem across worlds, energy fields, and assistance from Doctor Strange, Danvers defeats the evil bearded wizard — her only prize the satisfaction of a job well-done.  And a cat. 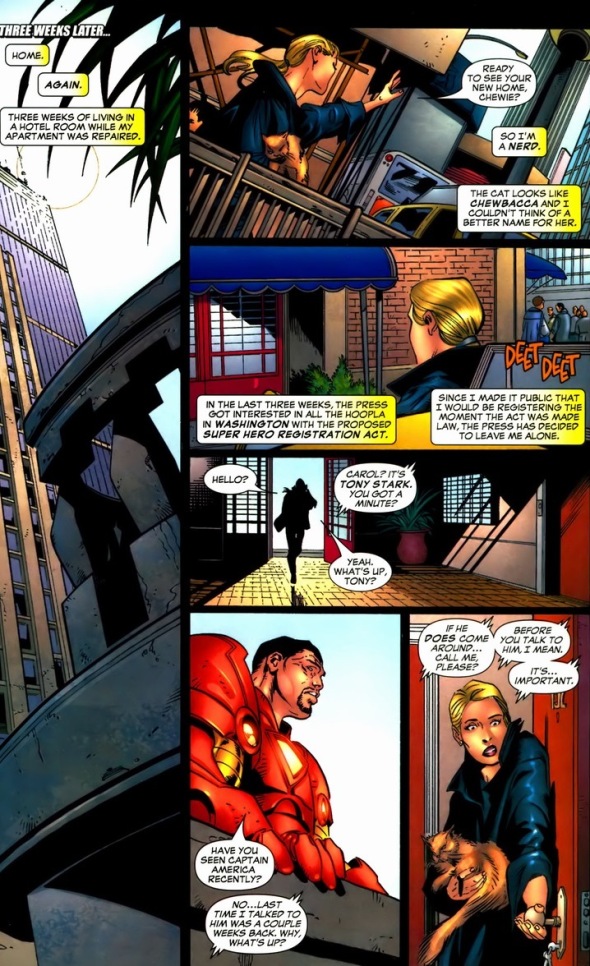 For the next few years, the cat serves as background, like an adorable lamp or something (plus one appearance in one of those Marvel encyclopedia issues).  Oh, and if you prefer drama with zero context, please enjoy. 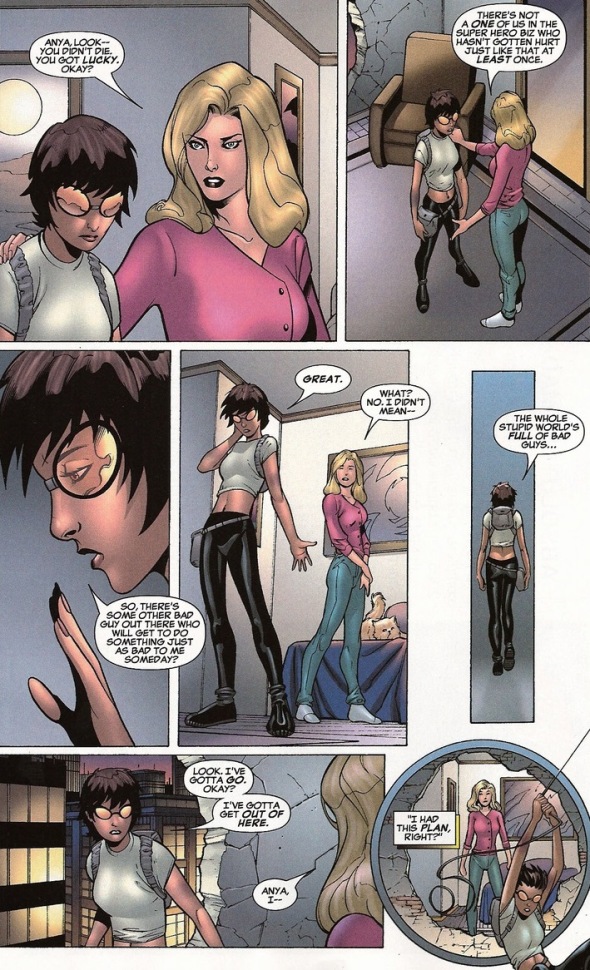 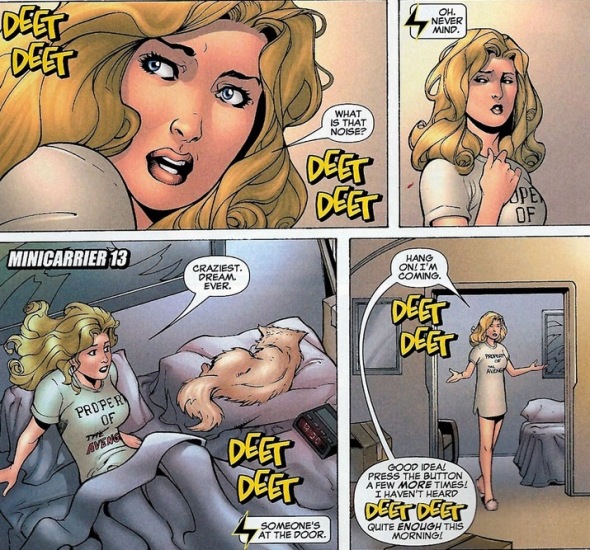 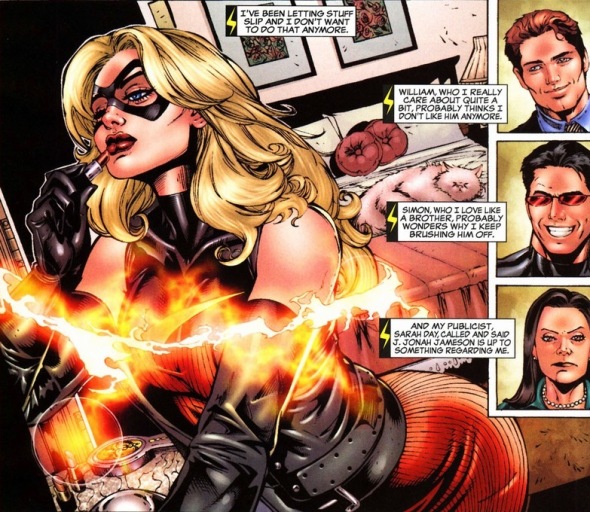 At long last, our cat gets used as more than just a reminder of Captain/Ms. Marvel’s home life. Chewie gets upgraded to the next level: prop. 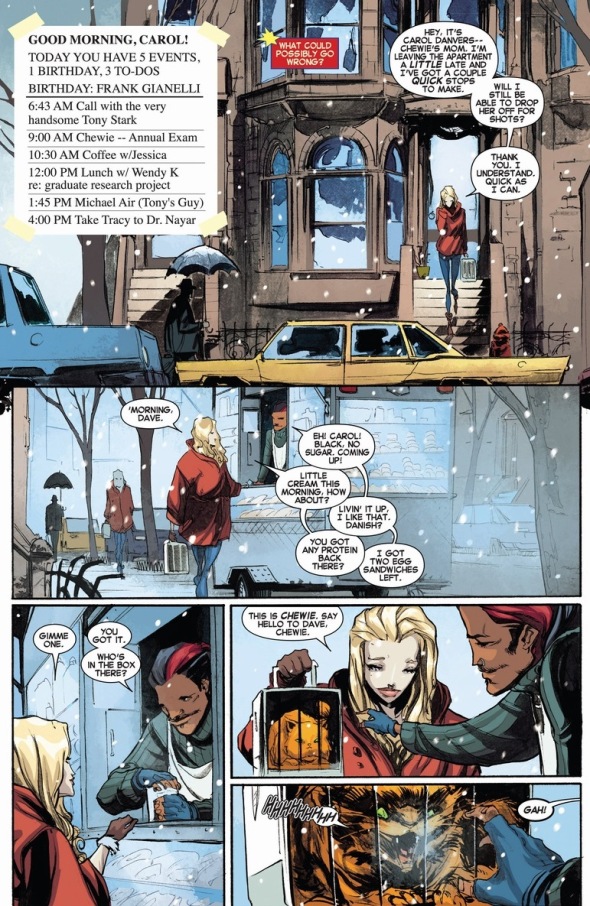 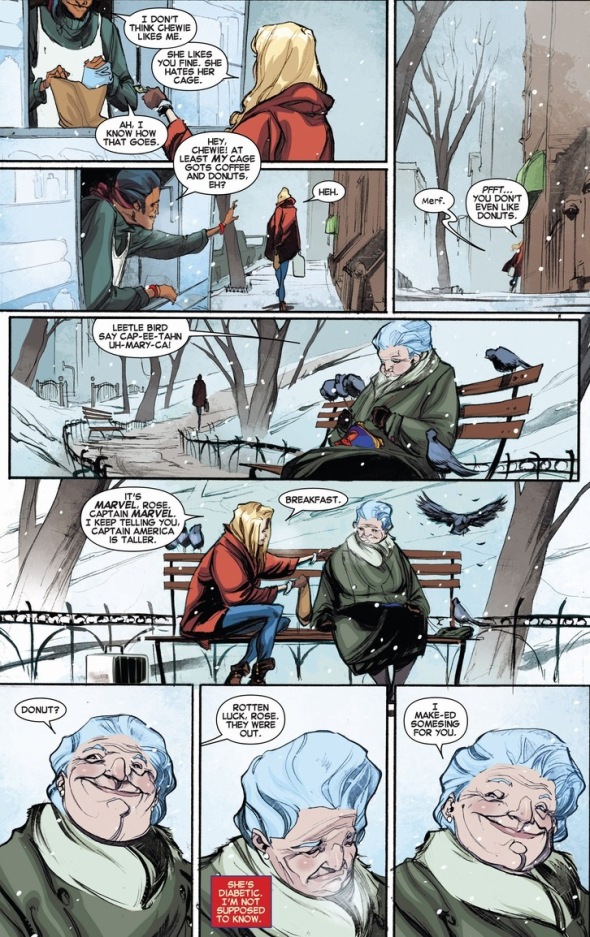 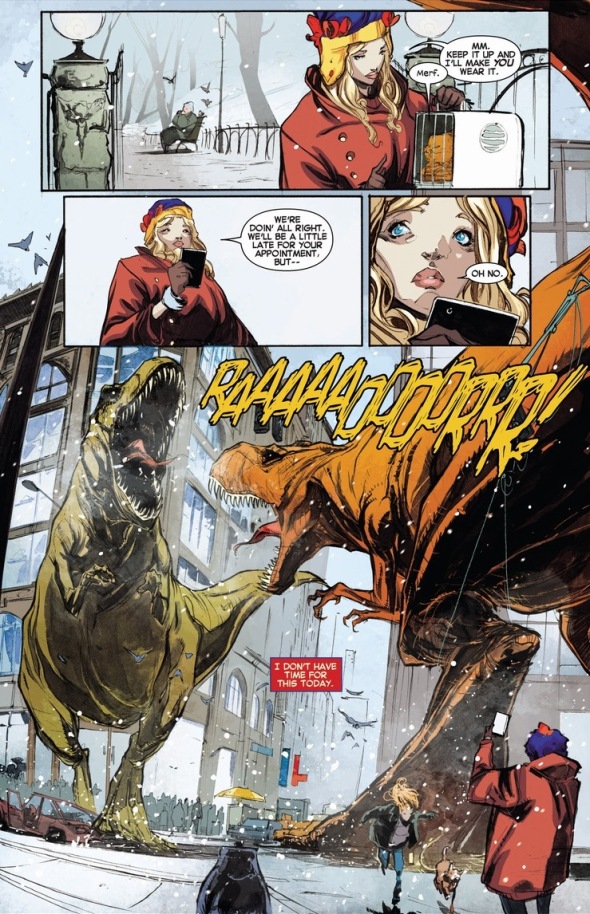 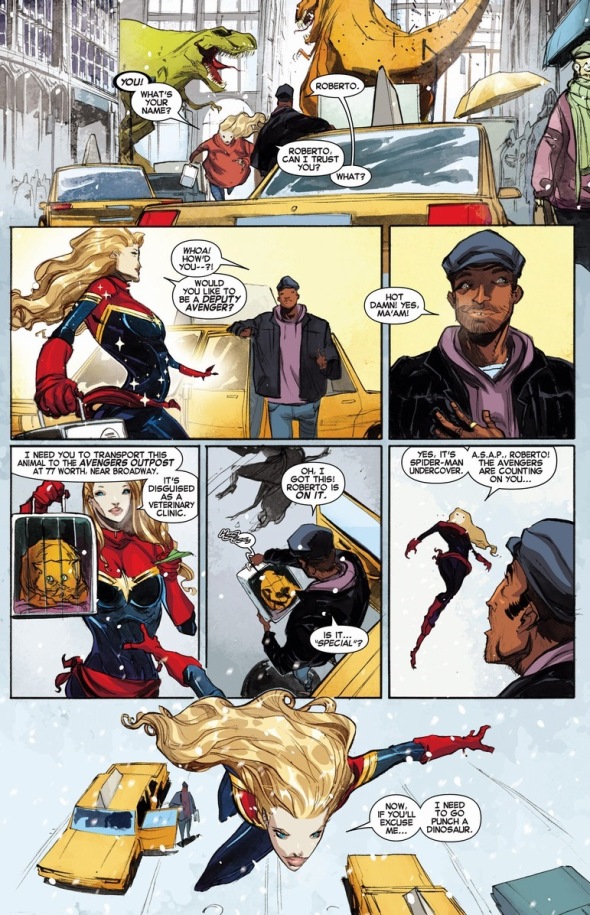 Isn’t Captain Marvel wonderful?  And the first issue of the new Ms. Marvel came out today as well. Inhuman DNA mixed with a quick-witted teenager dumped in a bowl of social commentary and eventual fistfights if you’re into that kind of thing. 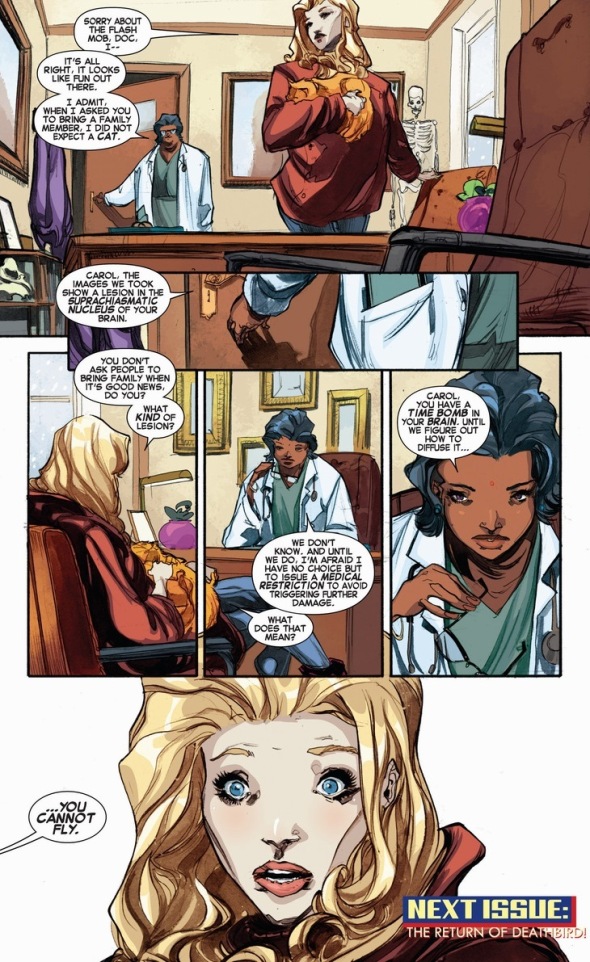 Spoiler alert: she does it anyway.  Captain Marvel has never been the paradigm of healthy living. Further appearances revert the kitty back to piece of background, but Chewie’ll always be in the foreground of my heart. 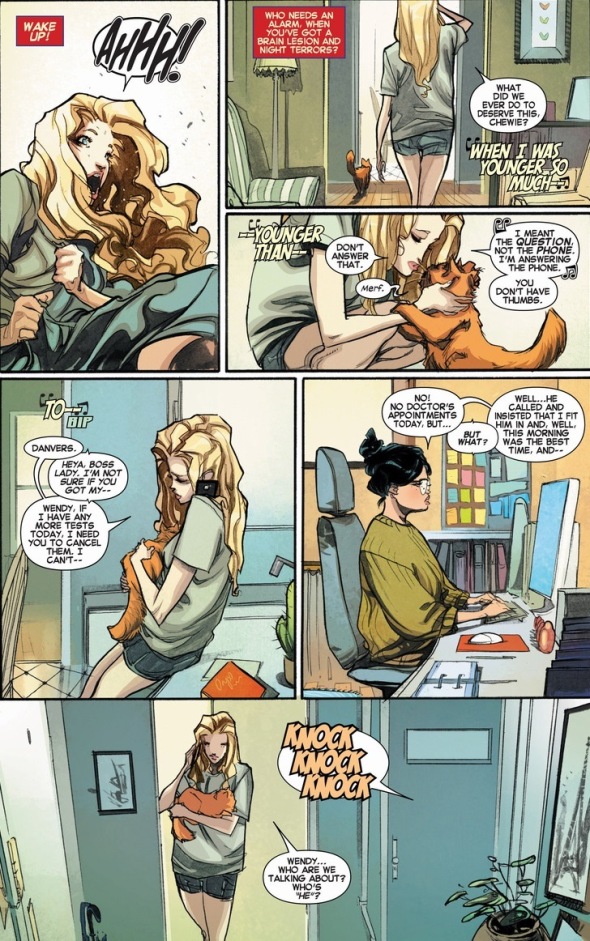 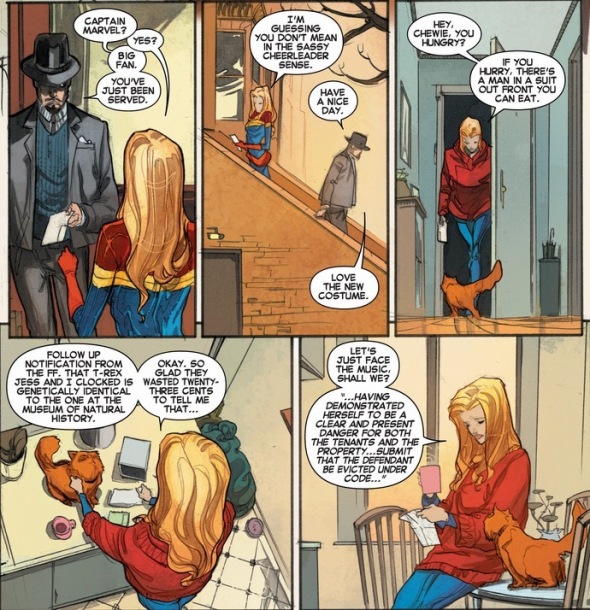 We’re done.  It’s anti-climactic, isn’t it?  Tomorrow, we’ll delve into another superhero’s cat, but this one can shoot energy balls and talk.  Comics are weird.