The complete story of Bill and Kelda, Pt. 3

We don’t need a lengthy introduction, right?  Bill died at the hand of Asgardian traitors and Kelda’s out for revenge on those that killed him.  Like Loki and Doctor Doom.  But y’see, while Loki’s the god of trickery and mischief, the evil doctor doesn’t bother with smokescreens and wild goose chases.  You want him?  He’s in that giant castle with his likeness plastered on it.  Go get him.

Kelda is no pushover.  She has all that Asgardian super strength and durability as well as that whole summoning lightning and ice from the heavens thing.  But let’s be fair: Doctor Doom’s normal battles are when he fights the entire Fantastic Four at once.  To be the arch-nemesis of an entire team of superheroes takes some tremendous skill.

Doom’s not exactly a shoulder to cry on.  Remember that one story where he sacrificed his childhood lover just for a fraction more of magical power?  Dude isn’t terribly sentimental, but this conversation does bring up an interesting point — Doctor Doom knew who Bill was.  Someone told the ruler of Latveria and quite possibly the Marvel universe’s busiest supervillain about a sword-wielding human in a backwards baseball cap running around the Latverian forest.  In a way, to have a baddie of Doom’s fame speak of Bill brings about a weird sort of honor in itself.

But honestly?  Blast the crap out of Doctor Doom — that’s not the eulogy Bill deserves. 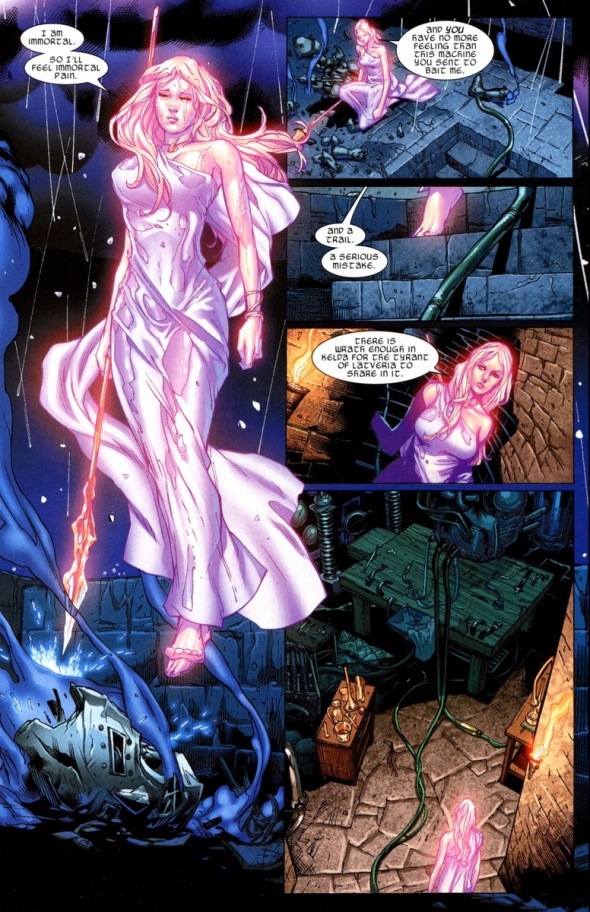 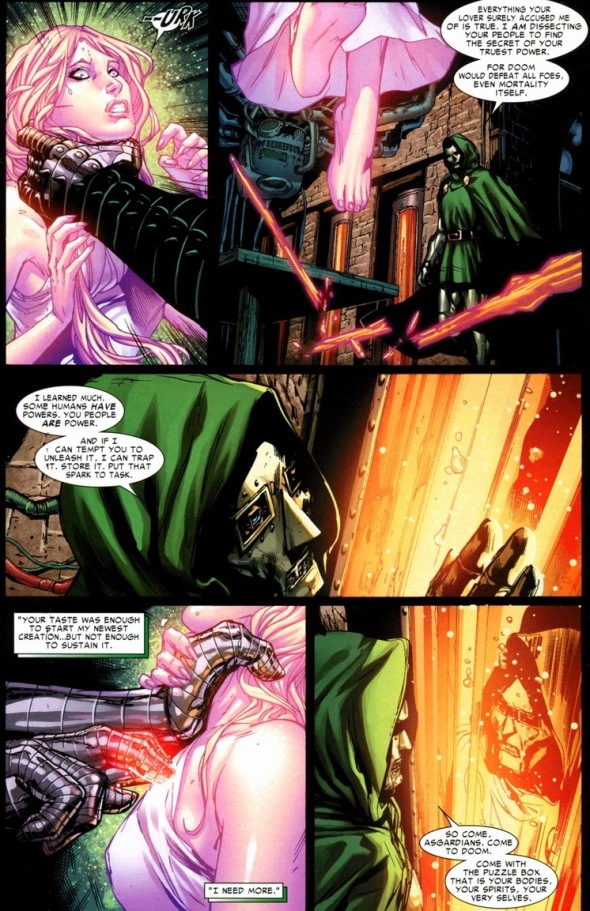 See the gorgeous symbolism?  A Doombot rips her beating heart out, just like Bill’s death did emotionally.  Oh, and if you’re unsure, Asgardians totally need their hearts to live.  Look, despite her being ambushed/sudden organ removal, we knew that Kelda could never take down Doctor Doom. The man has complete mastery of both technology and magic, hundreds of robots who can do the same thing, and his monologues only occur after he’s disabled his opponent.  Also, did you know Doctor Doom doesn’t wear pants?  I never thought about that until right now.

Luckily, Kelda’s death wouldn’t serve the purpose Doctor Doom hopes it would.  He’d much prefer to use her to mock and belittle Thor and friends instead of simply stuffing her body in a demon dimensional portal or something and forgetting about her. 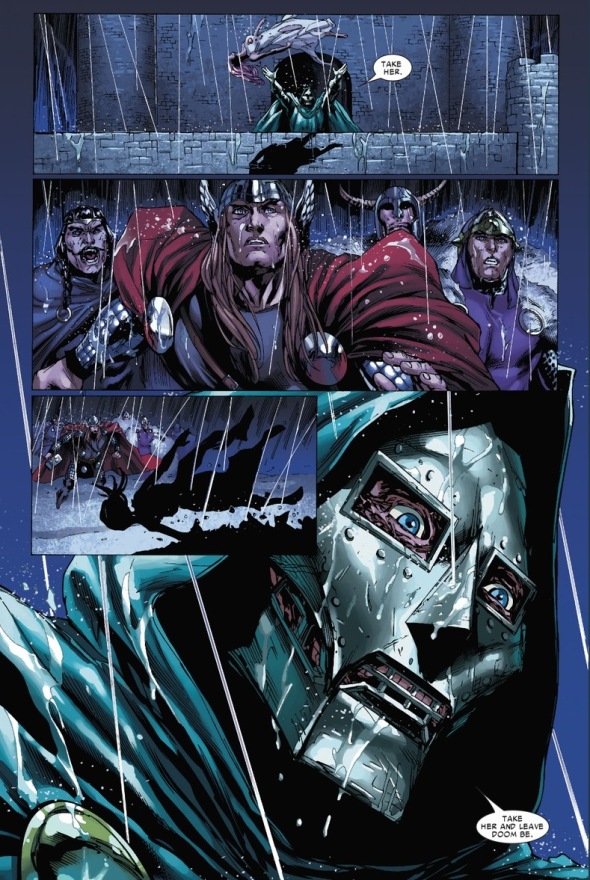 So you know who doesn’t take teasing very well?  A superhero who has absolutely zero fear of anything Doctor Doom could ever do or say?  Someone who’s major decision process hinges on how tough it’d be to clean blood off his hammer? 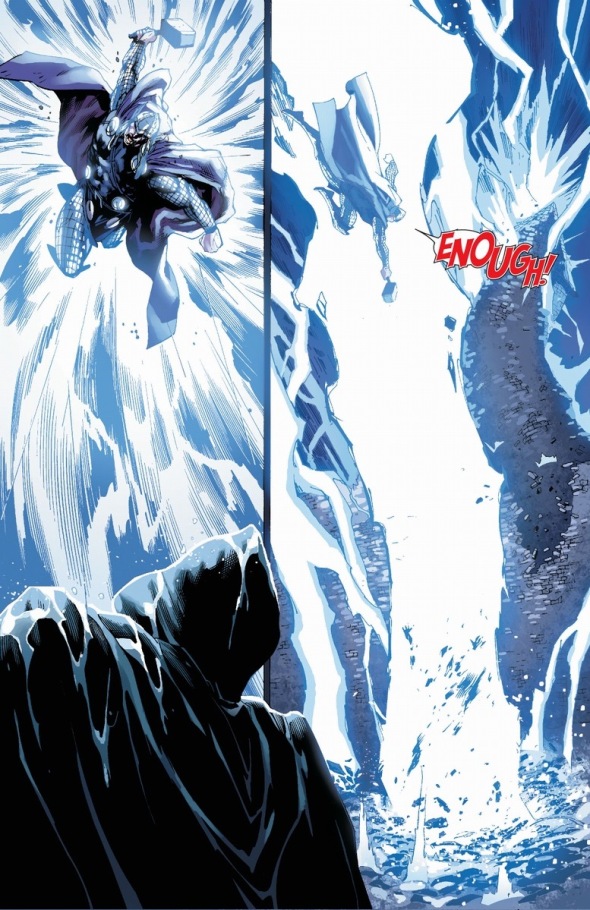 Kelda survives.  Loki saves her life actually.  He mainly does it to further his evil plot which I’m not going to cover, but she does survive because of Loki’s interference.  Though what kind of life could she enjoy now?  She has lived for thousands of years and will live for thousands more, yet that brave bumpkin from Oklahoma brought forth a passion and devotion inside her that she may have never felt previously (y’know, because it would take that level of commitment to attempt a zapping of Marvel universe’s most powerful supervillain).

Recall the first part of our story: Bill essentially abandoned his friends and family to pursue a new life with Kelda in Latverian Asgard.  Which means no one back in Broxton, Oklahoma knows about his death.  Because Asgardians don’t have an official means of alerting loved ones of a death in battle — they light the corpse on fire in a boat — our mourning goddess has to fulfill the responsibility herself. Now’s a good time to get your tissues ready.

There’s no worse conversation when two parties disagree despite only the truth spoken from both. But unfortunately, Kelda falls victim to one of the many unspoken superheroes laws — anything done that’s honest and kindhearted will be interrupted by combat.  Every time.  Every situation.

Norman Osborn, complete with his evil Avengers and the full force of the American government, launches an attack on Asgard at this exact moment.  And I don’t care what anyone says, I adored Siege.  But as we reminisce on how compassionate and loving Bill was — the same reasons Kelda fell in love with him (much like how the horizon loves the sunrise) — those admirable traits of his were totally inherited.  The Cobbs won’t let anyone be gunned down on their front lawn, even the woman indirectly responsible for their son’s death. 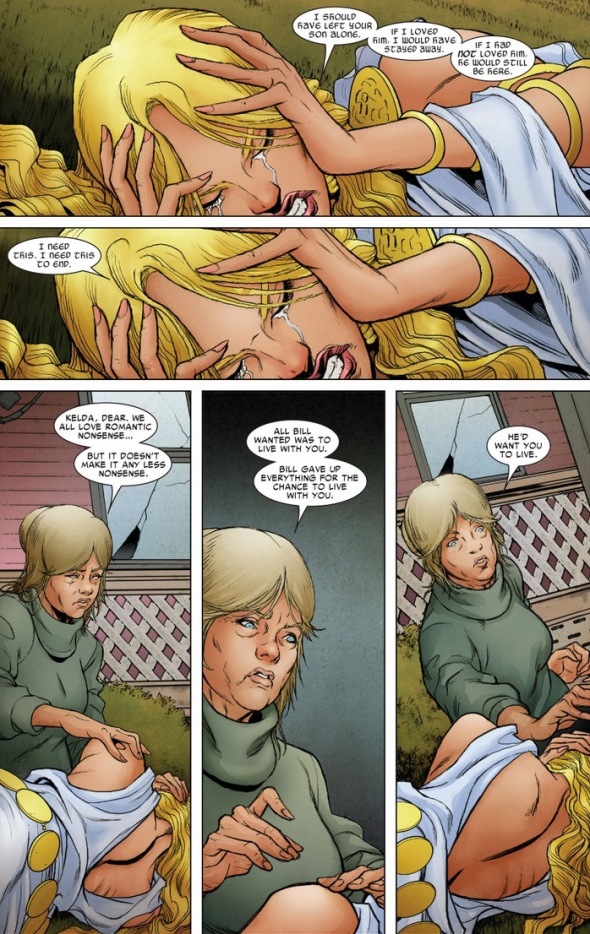 Her strength and will has finally settled on the correct direction.  We wrap up today with not a complete redemption from Kelda, but definitely the glimmer of one. Tomorrow our tale ends and you can finally rest easy as the final fates of Bill and Kelda engulf your sweet dreams of hope and romance. Because trust me — even after four days, three thousand words, and seventy eight images — our finale’ll be worth every single moment.

2 Comments on “The complete story of Bill and Kelda, Pt. 3”