As we end our week of fights and hope that the gooey romance aura of Bill and Kelda has fully washed off (though we’ll be covering Amadeus Cho and Delphyne Gorgon’s love story next week), rejoice in a new milestone for this blog: both our combatants today are bald.  You should probably sit down and stop clutching your heart in excitement.

You know Lex Luthor already.  He’s the egotistical billionaire who may be the most influential and important supervillain in the DC universe.  His megalomania and insatiable greed aside, I admire a man who’s battle outfit’s a well-tailored suit.  But it’s okay if you’re not familiar with the superhero Steel.  Let him introduce himself from Steel #1, written by Joe Bogdanove & Louise Simonson and drawn by Chris Batista: 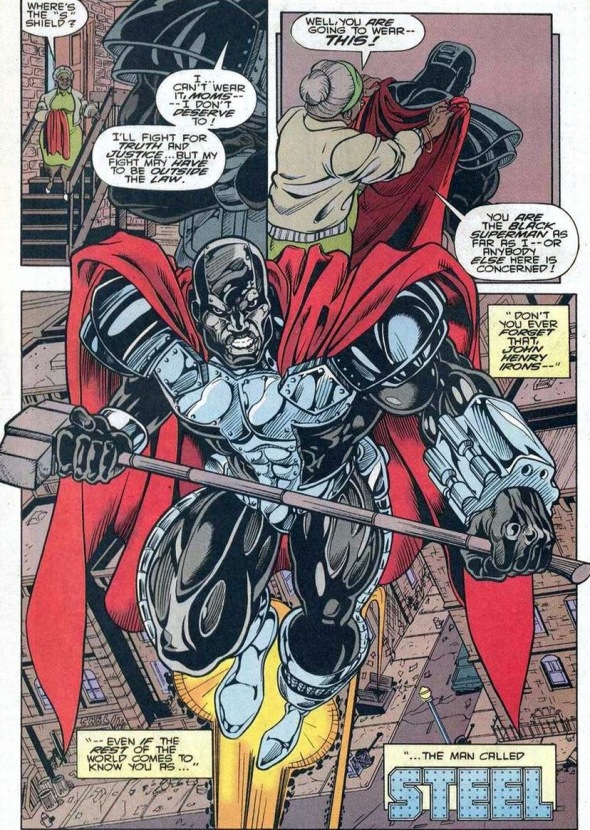 Steel (John Henry Irons) premiered in 1993 following the death of Superman.  Please take a moment and soak in those cartoonishly large ’90s muscles.  Anyway, four Superman replacements showed up in Metropolis, Steel being one of them.  He has no superpowers, just a genius technical mind and a metal suit of armor.  He’s Iron Man with a hammer.  Also, Shaquille O’Neal played him in a movie.

So we cut to 52 #40, with all the credits given in the first page I’ll show you below.  I loved the idea of 52.  Following the DC event Infinite Crisis, the big three (Superman, Wonder Woman, and Batman) took a year off from fighting crime.  Unfortunately, supervillains still enacted their dastardly schemes and 52 covered what happened during that year.  Like Black Adam fighting every single superhero in the known DC universe.  At once.  By himself.  But in our issue today, Luthor has kidnapped Steel’s niece.  Rescue time. 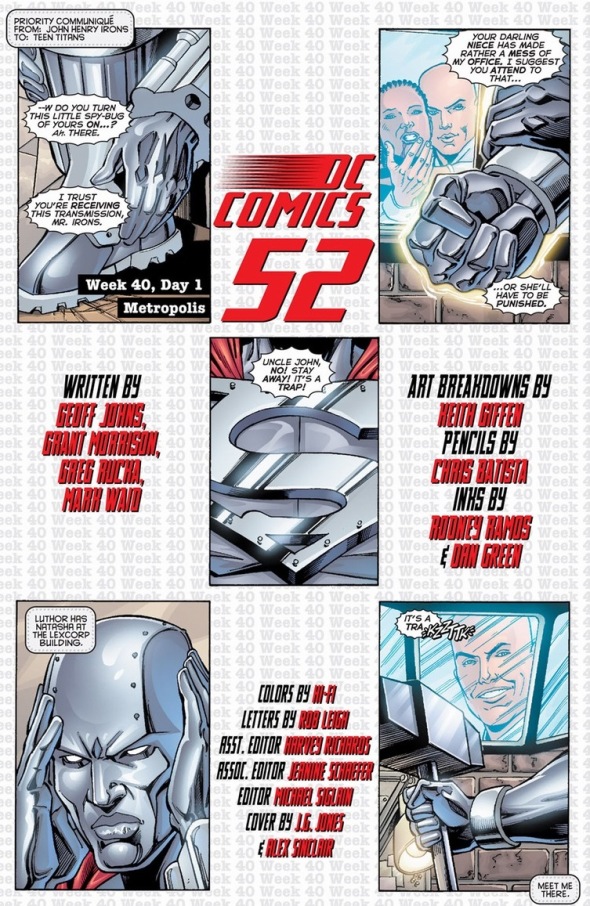 Steel brings the Teen Titans with him.  Luthor and Steel have been antagonizing each other the whole series, by the way.  Our bald bad guy discovered technology that gave normal dudes superpowers and then caused a whole bunch of death and destruction, so our bald good guy has been punching him every ten issues or so.  Now it’s time for the finale.

In a fight that can only happen in comic books, Steel’s about to lose his armor.  I think it’d be better if you saw it than if I explained it.

James Bond doesn’t fight shapeshifting giant crabs.  That’s a superhero thing.  Most importantly, in a world filled with spandex and unnecessary cleavage, it’s wildly refreshing to see Steel wearing jeans under his armor.  And though he possesses no superpowers except some justified rage and a sledgehammer, that should be more than enough to take down Luthor, right?  It’s not as if Luthor’s a Muay Thai champion or can pop out adamantium claws.

I know that Luthor’s immune to sledgehammers, but Steel didn’t realize Luthor’s durability was that high when he attacked.  Which means that if everything went according to plan, Steel’s best case scenario is Luthor’s head popping like a watermelon at a Gallagher show followed by Steel and his niece walking triumphantly out of the building with Luthor’s organs around their necks as a disgusting gold medal.  Or maybe he figured Luthor’s laser eyes meant full-strength hammer strikes would just bruise or something.  Either way, let Steel’s very Superman-esque words ring forth: 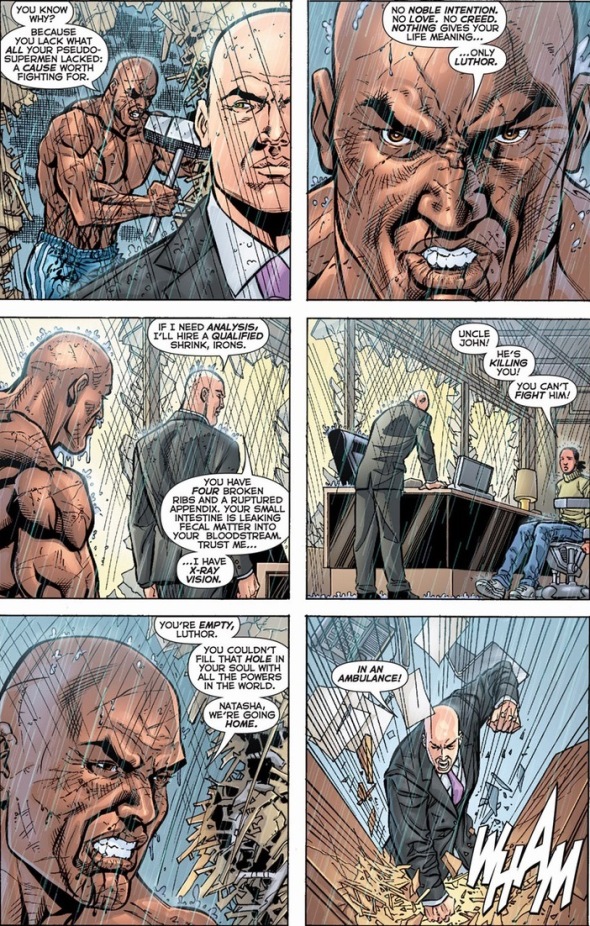 Keep in mind Luthor did outright murder dozens of people he gave the Everyman superpower serum by having them fly in the sky and then suddenly turning off their superpowers.  Luthor’s bad karma has reached astronomic levels, and Steel, even with fecal matter leaking into his small intestine, is the only chance of cashing in those karmic chips.  I mean, not immediately, because Luthor’s currently invincible.

We’re all friends, so I can admit that my research failed to mention how he lost his hand.  For Steel at least, it’s a solid conversation topic for Aquaman and him if they bump into each other at the JLA Watchtower.

Luthor’s ego’ll always bring about his own self-inflicted fall, even if Natasha Irons wasn’t a scientific super genius like her uncle.  Because though Steel can’t win against a superpowered Luthor, he can totally wipe the floor with a normal Luthor.  Lex really should have learned Muay Thai. 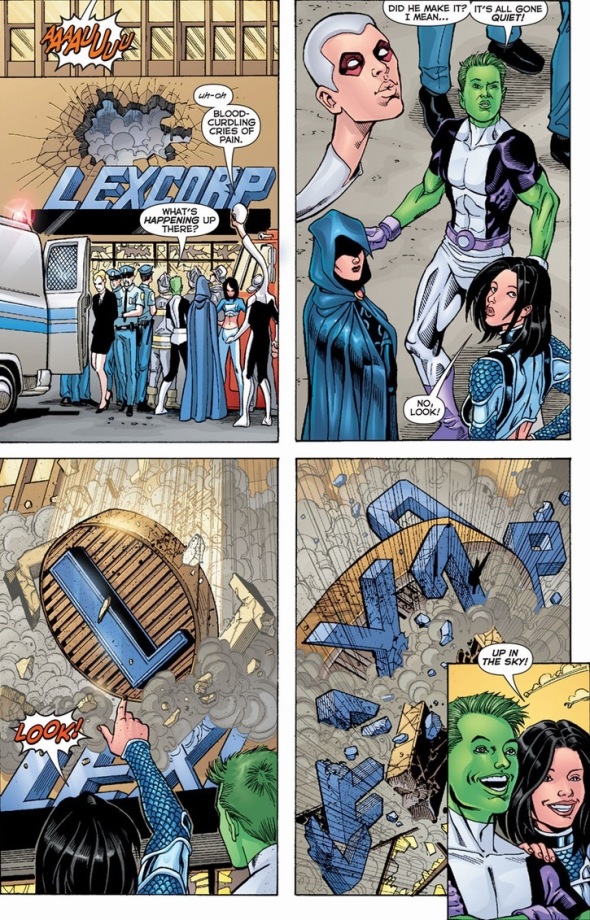 2 Comments on “Steel vs. Lex Luthor”