Green Lantern and the Fatality problem

It all started in 1988’s Cosmic Odyssey.  Green Lantern John Stewart, in a moment of weakness, chose ego over help and doomed the planet Xanshi to destruction.  It’s a long story and I’m sure we’ll cover it soon.  But one sole survivor still traveled the stars — Yrra Cynril, now known as the warrior named Fatality.  And when you name yourself Fatality, you’ve pretty much resigned yourself to supervillainy.  Now she travels around and slaughters Green Lantern.  That’s her entire life plan.  While it’s totally Stewart she should be hunting down, she’s fought Kyle Rayner far more.  Here’s one of those times (and my favorite battle between the two) in Green Lantern #177-178, written by Ron Marz and drawn by Luke Ross.

After a really bad day for Rayner, where he loses both his girlfriend and apartment, he must have realized what was about to happen next — every bad day for superheroes must contain a certain quota of bloodshed.

This is their fourth or fifth fight which Rayner has won every time, including two separate fights she loses one of her arms and replaces it with a robot version.  I guess like if you hit a tree with an axe enough times, it’ll eventually fall over.  Fight Rayner enough times and hopefully you’ll win one. Maybe get robot legs too.

I always admire the arrogance of supervillains.  They never win.  Not once.  Yet every time they meet their respective superhero, the man or woman or alien who has defeated them in the dozens of encounters they’ve faced over the years, they still feel like they should gloat and talk trash.  In a way, I’m jealous of that wildly high level of (albeit fictional) self-esteem/delusion. 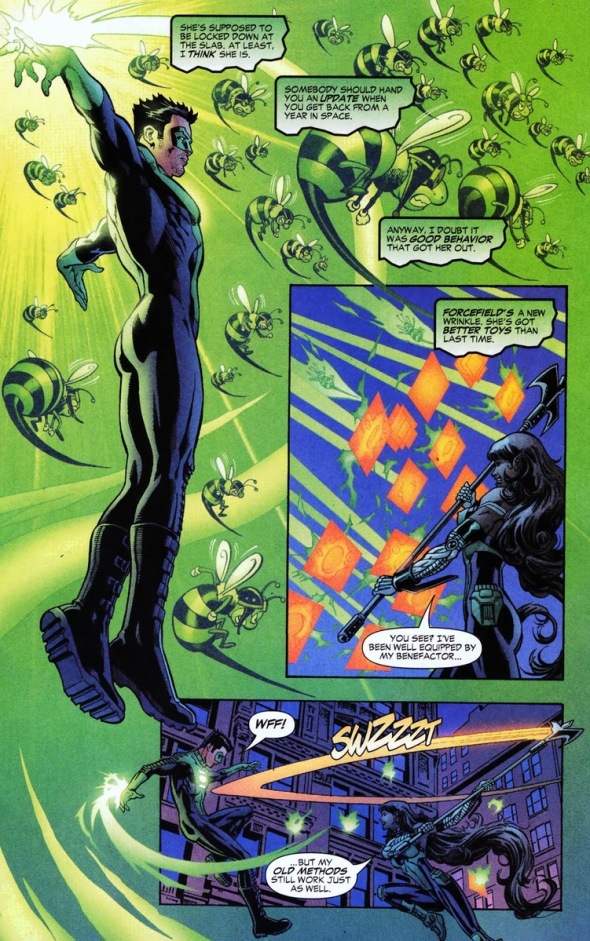 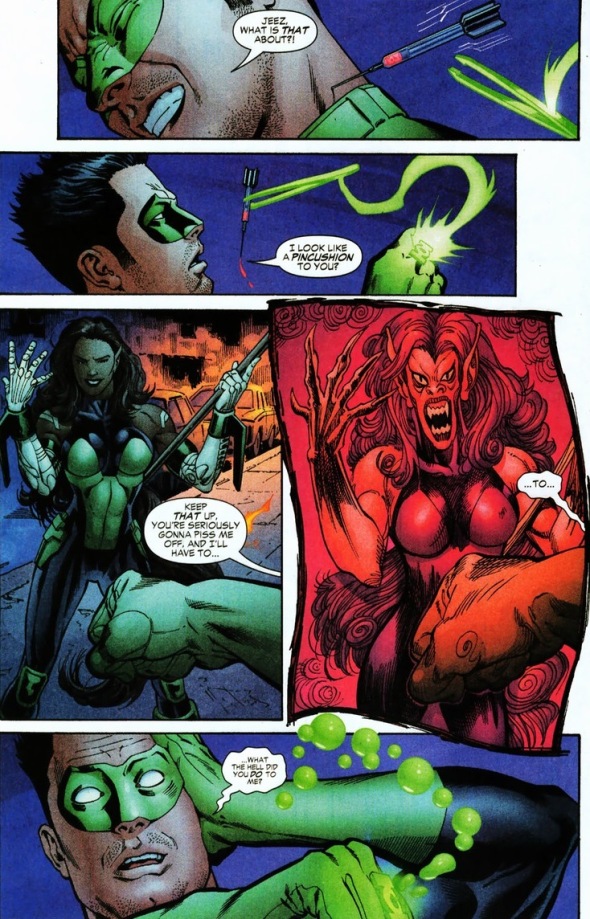 Poison.  If a battleaxe won’t work, try a subtler method.  Or maybe a battleaxe made of poison.  This is probably why I’m not asked to write comics.

Willpower’s a tricky concept, it being an abstract concept and all.  Sure, a bad guy could null Green Lantern’s willpower, but that’s the same idea as Scarecrow’s fear gas.  Anything that doesn’t have a numerical value can be changed or manipulated back to normal at any time.  All it takes is a writer to have his or her character announce, “I’ve overcome these feelings!” and we buy it because we don’t have a choice.  Anyway, Rayner gets smacked around a bit more.

Have you noticed Rayner’s constructs lean on the cartoon-ish side?  Former artist turned space cop cliché.  Oh, let’s talk a bit about Fatality.  Soon, she joins the Star Sapphires, the New Guardians, and totally began a real relationship with Stewart — the Green Lantern who genocided her people.  If I’ve gotten messages from match.com girls who won’t date me because I’m Jewish, how the hell does she get over her boyfriend killing all of her people?  Sure, it was an accident and we’ve forgiven him for it, but for me, I’d find it’d hard to look past his faults and develop any romantic feelings for, say, someone like Hitler.  Like full-on making out in public with the Führer — it would never happen and his mustache would tickle.  Look, I get the symbolism of their coupling and I’m totally willing to suspend disbelief, but we all agree it’s a bit weird, right?

Victory once more goes to Rayner, as it always will.  Truthfully, I picked this article mainly because of the giant cartoon throwing an airplane at Fatality.  I made a good choice.

One Comment on “Green Lantern and the Fatality problem”