Saving the world is hard.  Most superheroes only do it maybe a few dozen times in their career, making a catastropic planet-destroying threat only happen once or twice a week.  So it helps to have a variety of cool powers or abilities beyond being really good at archery.  When the Justice League goes kaplooey and it’s time to reform, the big three — Superman, Wonder Woman, and the third wheel Batman — figure they should do it the old fashioned way: based entirely on subjective opinion. Today in Justice League #0-7, written by Brad Meltzer and drawn by Ed Benes, the DC Holy Trinity choose their new teammates, and it’s a fascinating look into the minds of DC’s finest.

The gray text boxes below are Batman’s, the red are Wonder Woman, and the blue are Superman. 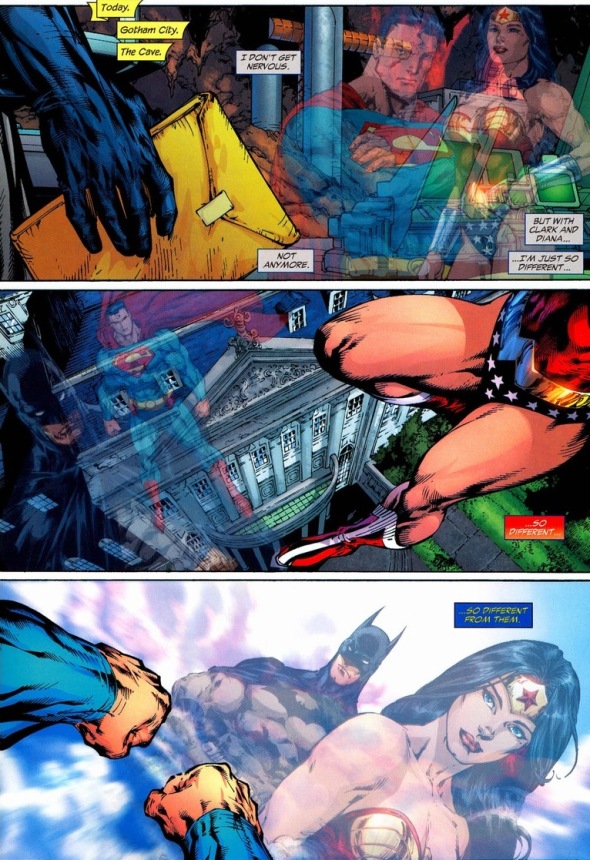 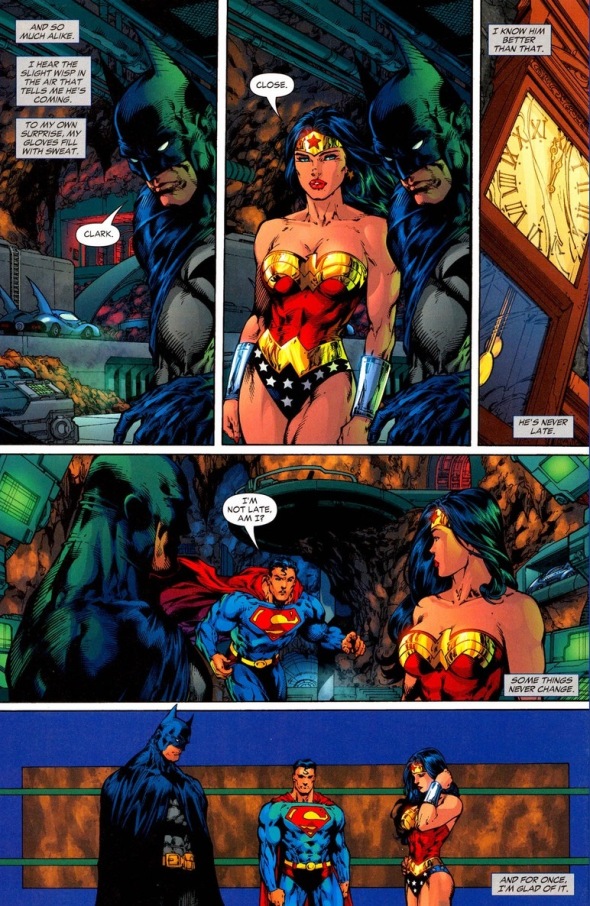 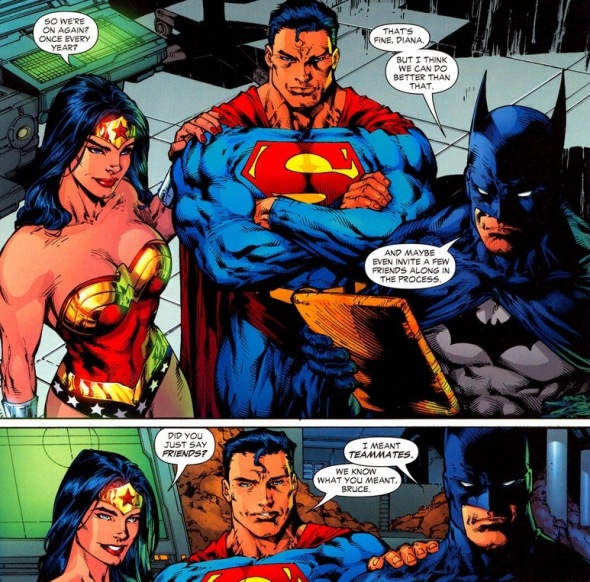 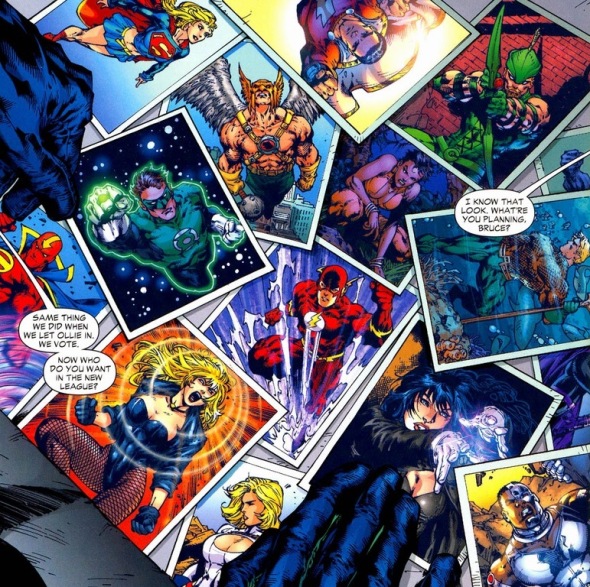 So what is this new team looking for?  With Superman and Wonder Woman around, maybe they just need someone to mop their brows when they’re busy doing bicep curls with mountains.  But we’re in the world of comic books, where a bad guy may have a kryptonite laser and anti-Amazonian spray but be vulnerable to tridents through the stomach.  So it’s time to bring in some help — but sadly, no one with tridents.  Aquaman’s busy riding dolphins or something.

First up, Captain Marvel.  You can click the picture for a larger version.  And just so we’re clear, the page below’s focusing on Wonder Woman’s symbol and not her breasts.  Probably. 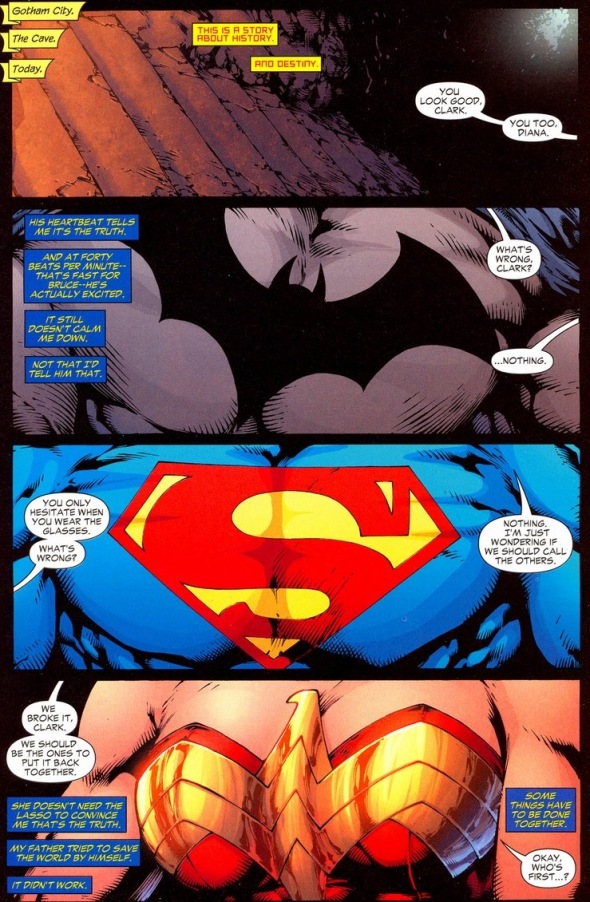 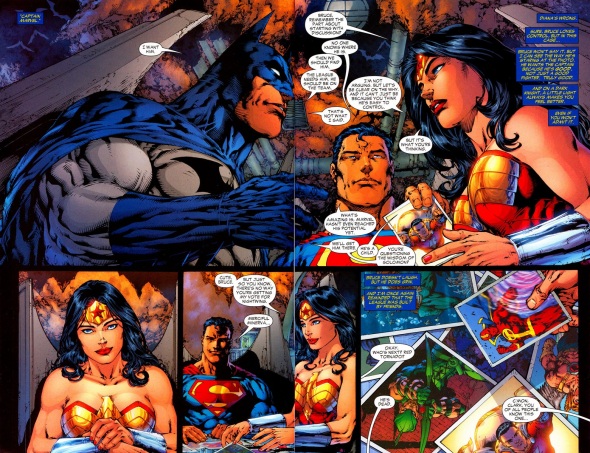 As this selection process takes place over the next three or so issues, the main focus of the arc and all that I’m skipping revolves around Red Tornado.  Y’know, the android with tornado powers.  A bunch of other heroes join up, everyone fights Amazo, and so on.  But deep in the Bat Cave, our three protagonists have more important decisions to make — and see that for all the words used to describe superheroes, impartial isn’t one of them. 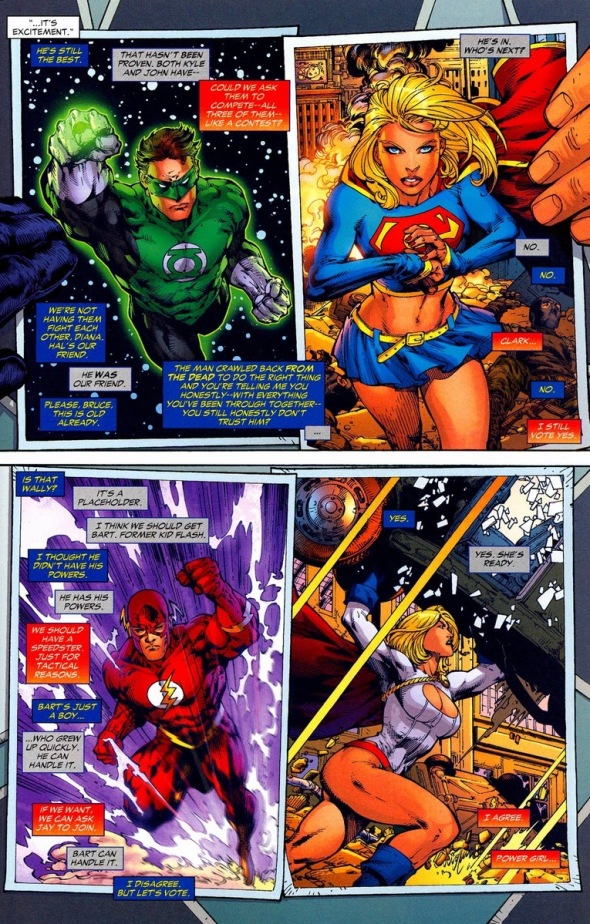 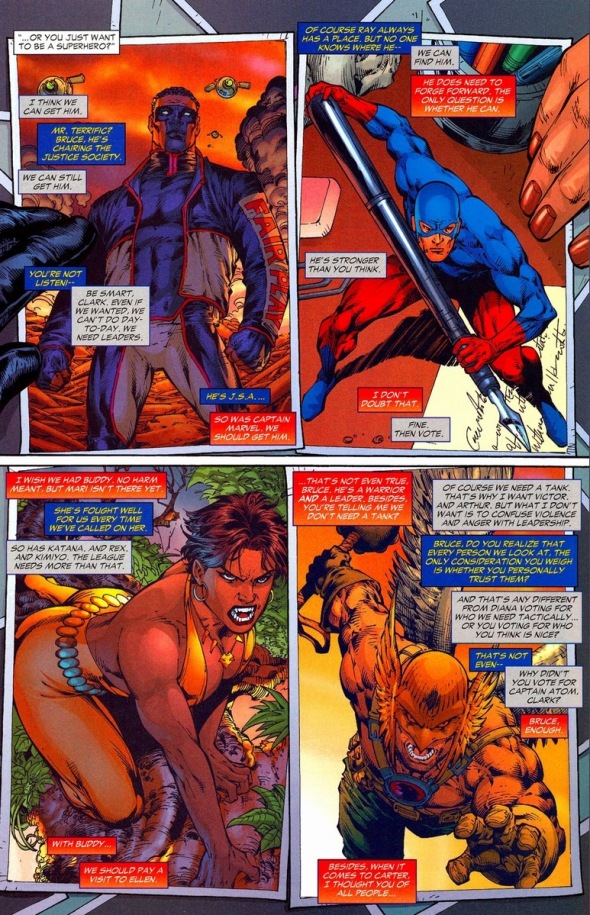 Solid choices so far.  Hal Jordan’s easily the greatest of Earth’s Green Lantern — well, maybe not the greatest, but definitely one of the top four.  The Atom’s fantastic for covert ops, plus he wields a mean ink pen.  And I’ll always have a soft spot for Hawkman, just how out of admiration for any man who fights crime without wearing a shirt.

Round two of voting? 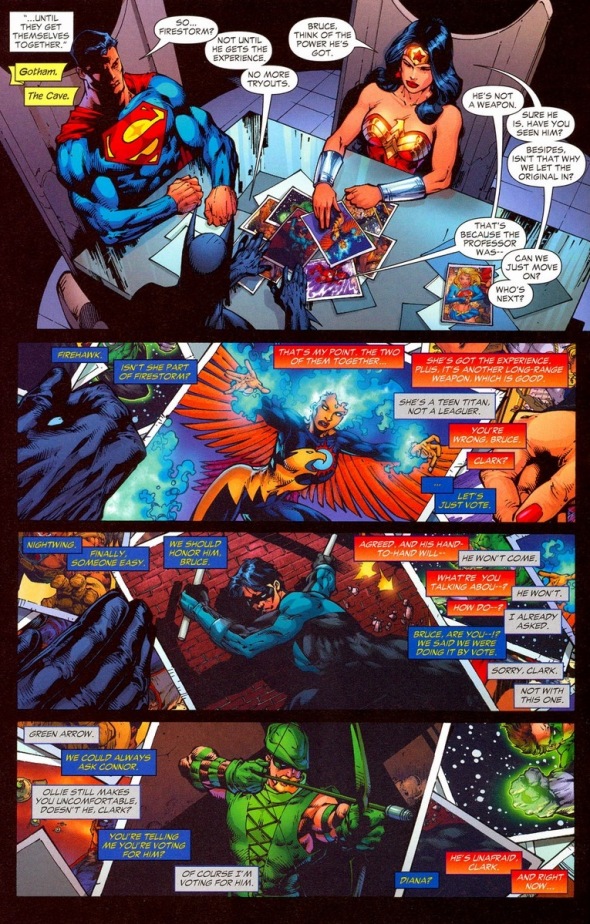 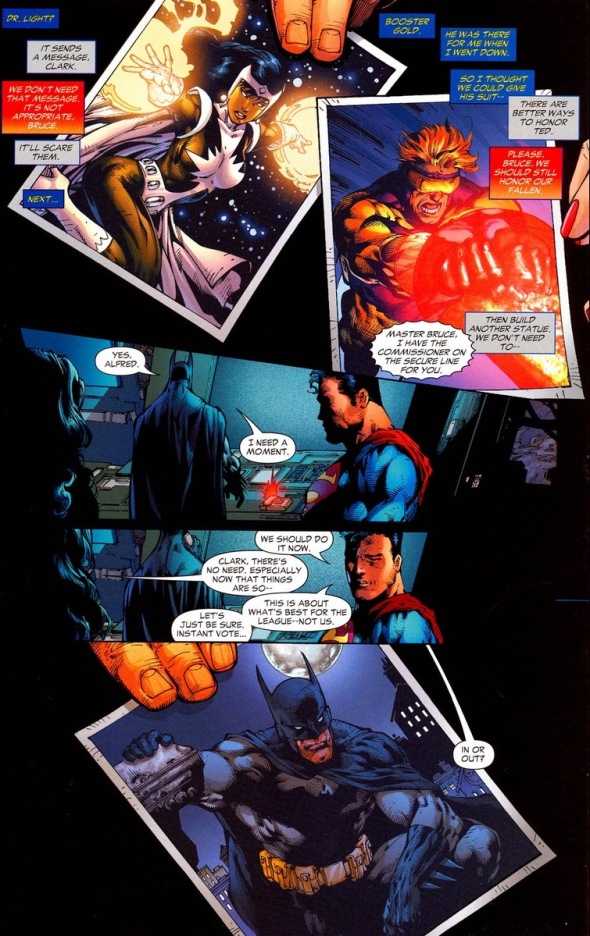 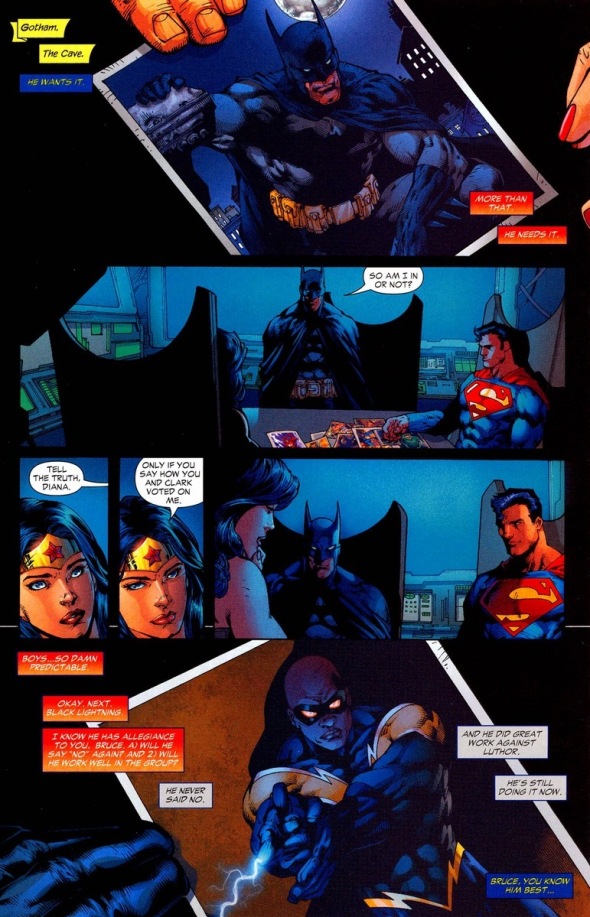 Look, I’m no psychic, but were Wonder Woman and Superman really going to say no to Batman? They’re in his house, for goodness’ sake.  And who would veto Superman or Wonder Woman?  They can play catch with the moon whenever they’re not being tickled by nuclear blasts.  Sadly, any future voting gets sidelined as an emergency springs up. 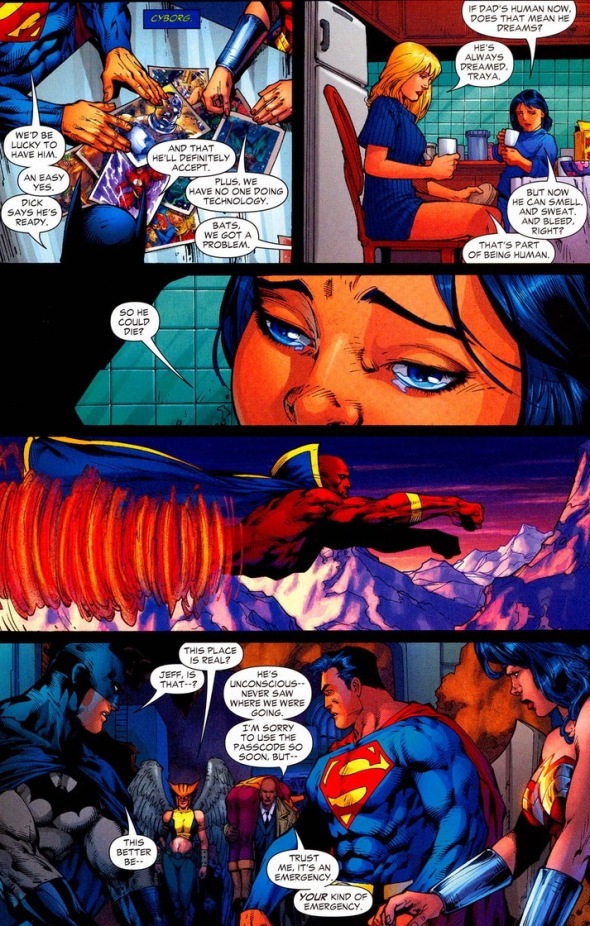 Amazo, Red Tornado, and a bunch of other superheroes suspend the Justice League election.  And like all good superhero teams, this new Justice League isn’t chosen based on who’s useful or ready, but instead on the classic gathering technique: convenience.  All that discussion and nothing to come from it. So while no Power Girl or Cyborg, when a team needs assembling, why not choose those that stumbled onto your doorstep?  Saves times, I guess.  And Vixen, though she’s not pictured. 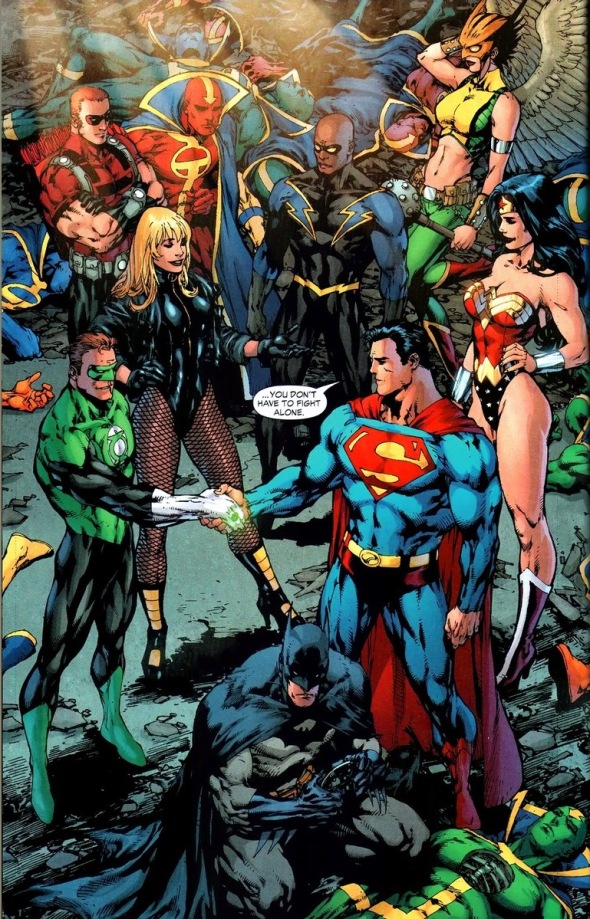 Meet the new Justice League, chosen from who just happened to be in the area: 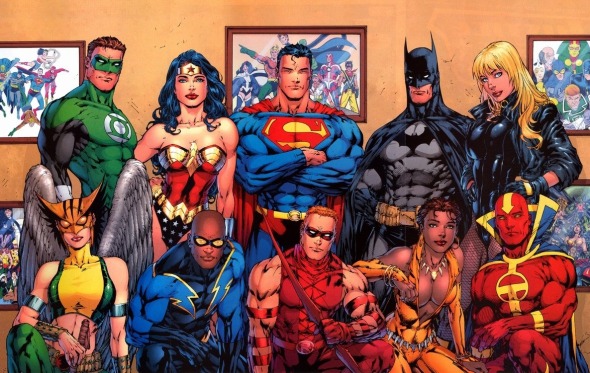 They only save the world nine or ten times.

2 Comments on “Picking the Justice League”