As a teenager, Robin’s going to come across the normal teenage dramas as well as occasionally batarang-ing Two Face or Penguin or whoever.  Even Tim’s mentor can’t help with high school issues as unfortunately, Batman spent his own youth training as a ninja in the Himalayans.  Vengeance takes decades of prep, y’know.  So poor Robin has to get thrown into the inferno of improvised problem solving today in Robin #25-26, written by Chuck Dixon and drawn by Mike Wieringo, and Robin #46, written by Dixon and drawn by Cully Hammer.

Get ready for another after-school special with bo staff beatings, because hopefully nerdy ’90s teenagers would pay attention to stuff Robin does.  Though it seems a bit patronizing in 2014, I’m okay with this type of story.  While kids can’t totally relate to school shootings (well, maybe now but not so much in 1996), they do understand impossible choices and it’s nice to have their fictional hero attempt to tackle that type of problem.  I might just be overly simplistic, but I think we can all agree that in summary, being a teenager totally sucks.

Tim enlists his dad to go talk to Karl’s dad.  The conversation goes exactly as you expect.

Have you noticed how perfectly comic book characters’ hair grays?  It only reaches the temple and never expands into the precious moneymaker at the top (see Hal Jordan, Mr. Fantastic, Alan Scott, etc.).  Just a touch of distinguish-ness to show old age and a full, beautiful heap of hair above.  Do comic book characters only ever have a thick, gorgeous head of hair or none at all?  What about the balding superheroes and villains?

Oh yeah, and Karl’s rebuttal to Tim the next day also goes exactly as you expect.

You don’t have to be Martian Manhunter to figure out what’s coming next.  That and the title of today’s article gives it away.  Robin has no problem snitching on his classmate — it’s to save his life, after all. Did Karl really think Tim wasn’t going to say anything?  The dude spends his nights handing over tied up bad guys to the police by the dozens.  He has battled every psychopath, monster, and criminal mastermind that Gotham City can throw at him — and won every time.  Robin ain’t scared of bullies. Though like all dramatic and sad superhero moments, our hero’s just a moment too late. 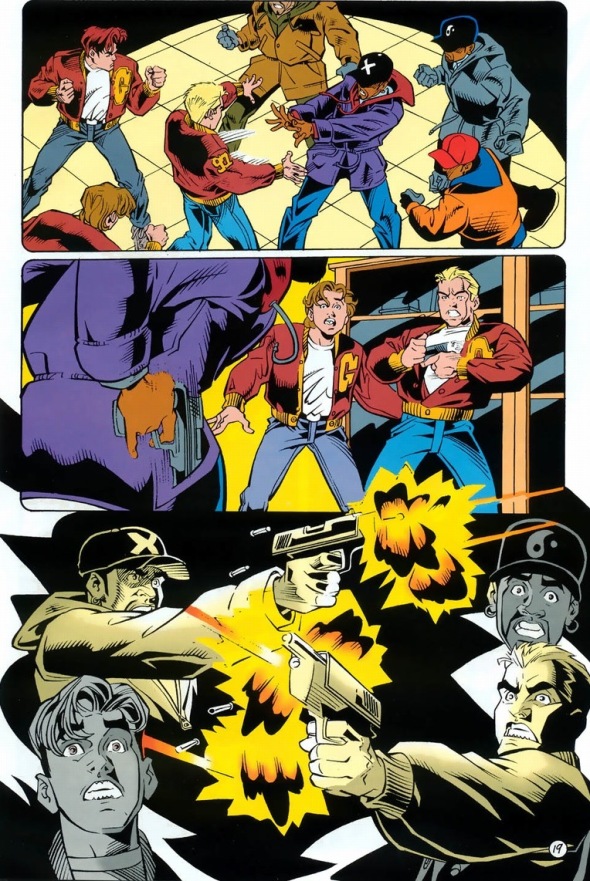 Why is this moment so upsetting compared to the rest of Robin’s career?  Batman’s partner has seen hordes of dudes gunned down, women and children horribly killed, and the absolute core of Gotham’s evil.  So why one dumb bully from his school?  Simple:

Robin and Tim Drake are separate entities, and they have to be for a teenage boy to handle the stress and sights of being a vigilante crime fighter.  Kids worry themselves sick over algebra tests, much less dodging machine gun fire.  Robin keeps all that potential PTSD locked away behind that mask — something Batman doesn’t do.  For a superhero who we all claim as a non-powered human, there’s very few human characteristics about Batman.  Now Nightwing, he’s more of the perfect balance.  I know it’s a little brief today but it’s a good stopping point for the second half on Wednesday (mainly because 30 images in one article gets draining) and Robin’s attempted revenge.  Spoiler alert: it’s sad.