The Impulse and Batman team-up

No two superheroes have less in common than Impulse and Batman, except maybe a mutual respect for Batman.  The child speedster arrives in Gotham to play a prank on Robin — that’s his entire motivation for coming to the city and almost a perfect summary of the character himself.  And you know Batman already, the scariest man in the DC universe.  Today, they team-up against the Joker and it’s absolutely delightful.  Let’s read together Impulse #50, written by Todd Dezago and drawn by Ethan Van Sciver.

Note the brilliant difference in art styles.  Impulse is drawn like a living cartoon with a larger noggin and softer features while Batman has his standard gritty lines and indulgence in shading.  Unfortunately, despite Impulse’s superpowers and Batman’s over-reliance on solo work, there’s one more solid reason for Impulse to run on home.  Y’know, it’s in his superhero name.  Also, you can really see the clear gorgeous difference in the art on these pages: 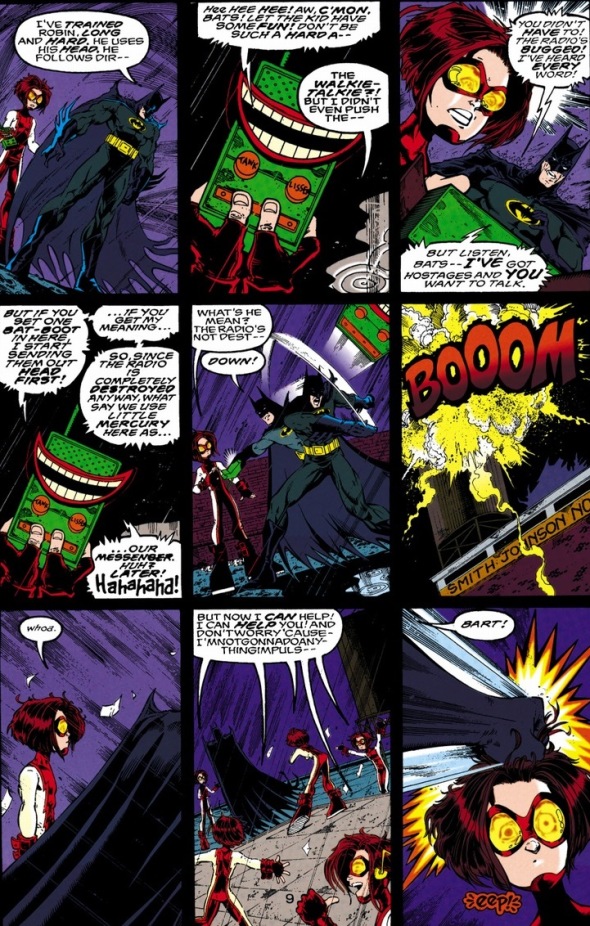 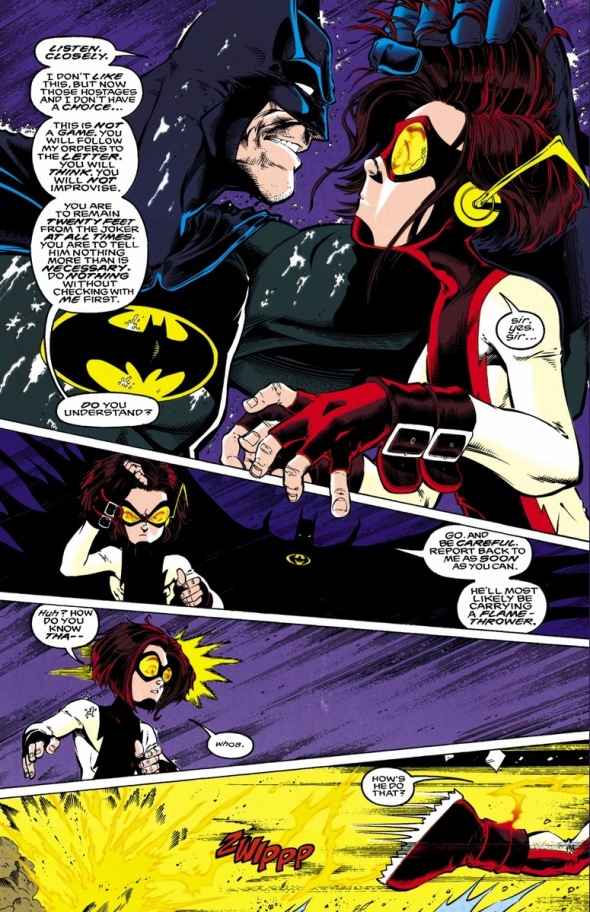 Witness Impulse’s first conversation with the Joker.  The poor kid has to keep Joker busy long enough for Batman to disable all the traps.  Luckily for all the Joker’s unpredictability, at least he’s always terribly verbose. 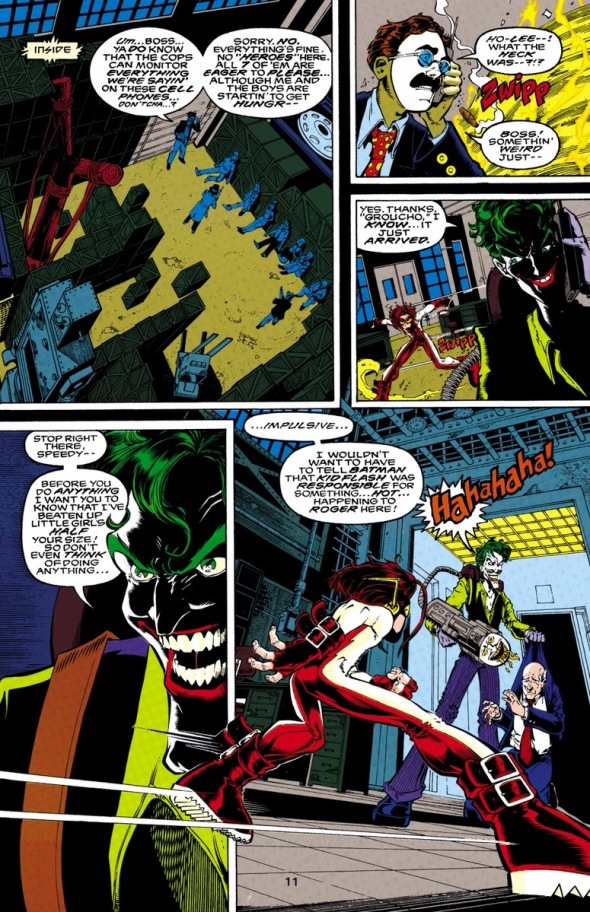 Joker’s bad grammar aside — it’s almost impressive for the Joker to bring about that level of fear in those he’s around.  The guy has no superpowers, no real alliances, an above average but not genius intelligence, and fairly middle-of-the-road martial arts skills.  Though I guess anyone would pick up a few fighting tricks getting bashed in the head monthly by Batman for the past decade or two.  So what would any good supervillain do with a speedster at his disposal? 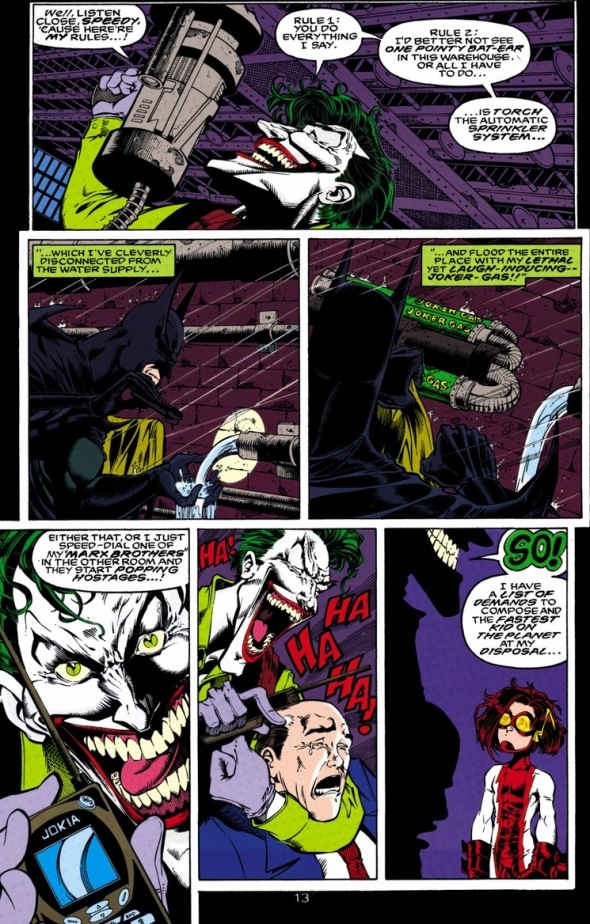 You can click the picture for a larger version of the montage.  And you should, because it’s fantastic. Note all the jokes: the two notes he starts to write his real name before crossing it out, that gleeful panel of Batman and Impulse cackling like mad scientists, Impulse’s poses as he takes pictures for Joker, etc.  For all the darkness and extreme-ness of comics in the ’90s, we can’t forget that glimmer of silliness and fun hidden beneath numerous pouches and leather jackets.

Also, three great jokes on the next few pages. 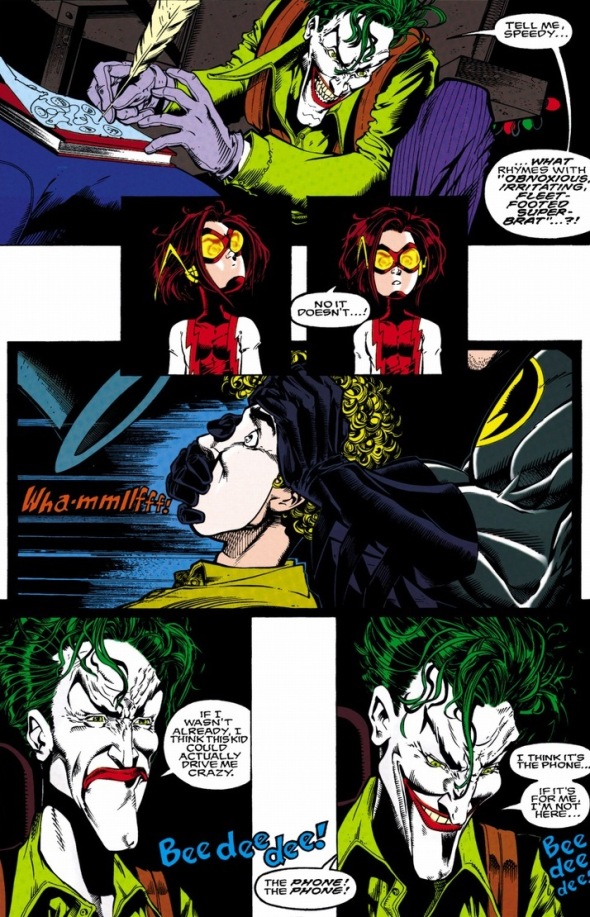 There’s a three page fight scene after this, but you can buy the issue for that.  The important life lesson comes at the story’s conclusion, where all young superheroes experience growth through the tribulations of working with their elders.  Most importantly, Batman does something that’s his own perfect character summation.  He manages to give a compliment and an insult at the same time, thus bringing Impulse’s feel-good status back down to neutral.  You wouldn’t want the kid to get a big head, right?  I mean, a bigger head than he already has.

We’re back to Robin on Wednesday because Tim Drake holds a special place in my heart.  He makes out with Jubilee.  How’s that for a tease?

4 Comments on “The Impulse and Batman team-up”