← Cammi and Drax in space, Pt. 2
Cammi and the rebirth of Drax →

Cammi and Drax in space, Pt. 1

As we last left off our galaxy’s most wanted man and his companion, a mean 10 year-old child, the two of them had jettisoned into space for more adventures or whatnot.  And by adventures in space I mean caught up in the largest galaxy-wide war in recent history.  Luckily, Drax serves a perfect place in this ongoing conflict.  The brute who has murdered away across every solar system gets to act as a mentor-ish for the main character of the Annihilation event: Nova.  Also, a bunch of stabbing.  But we’re getting ahead of ourselves.  We’ll be taking a look today and Monday at the following:
Annihilation: Prologue one-shot, written by Keith Giffen and drawn by Scott Kolins & Ariel Olvetti
Annihilation: Nova #1-4, written by Dan Abnett & Andy Lanning and drawn by Kev Walker
Annihilation #1-6, written by Keith Giffen and drawn by Andrea DiVito

To start, let’s pick up exactly where we ended.  Like the very next scene in Cammi and Drax’s space arrest from the end of last time’s article. 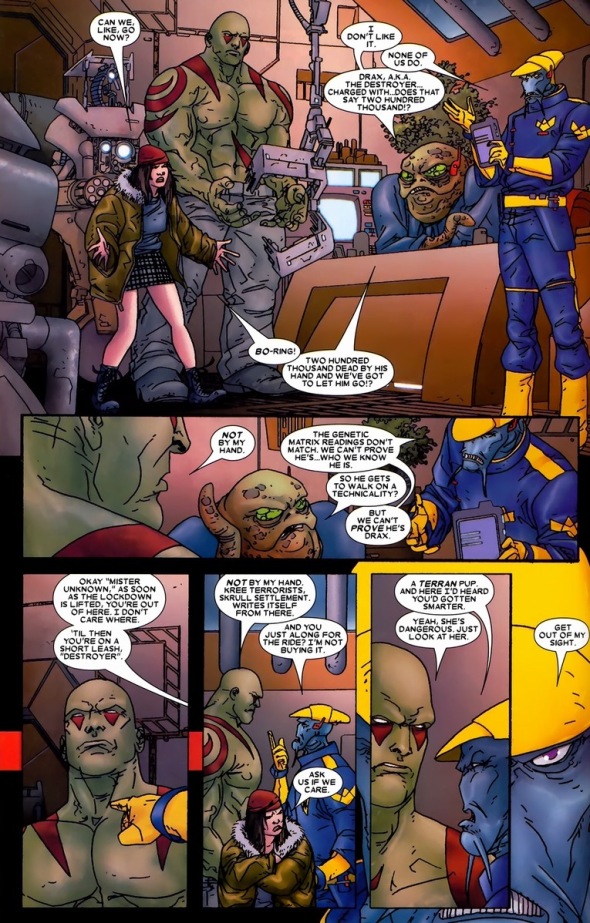 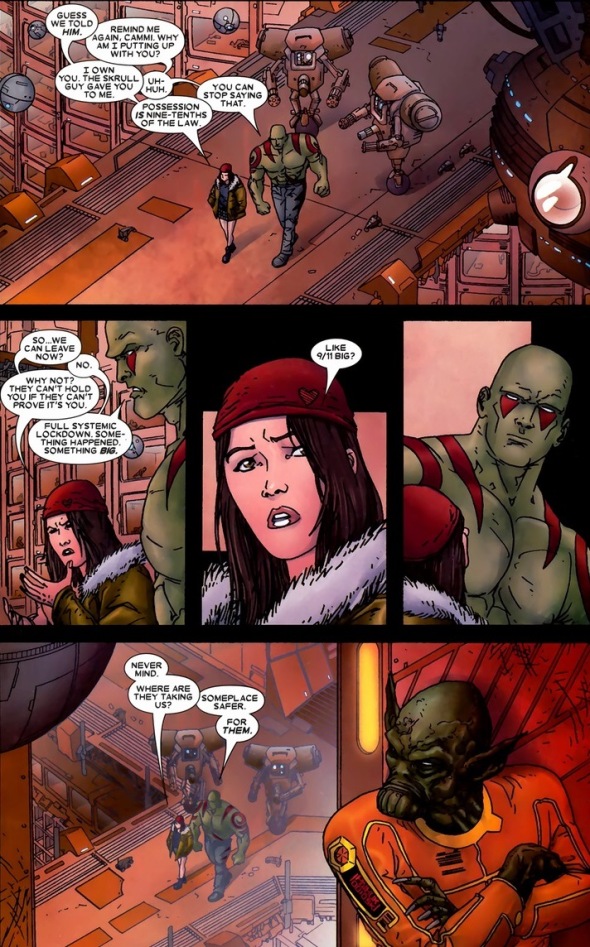 A couple of things to take note.  Drax’s personality begins to really shine during this series.  Last time, we witnessed his triumphant return to the Marvel universe after an elongated absence.  Now we’ll see his essence being molded into the grumpy, violent Drax we adore.  Oh, and did I mention that a war’s about to start?  Annihilus (leader of the Negative Zone) and Thanos (former wielder of the Infinity Gauntlet) team up to wipe out the galaxy.  The Nova Corps — Marvel’s Green Lantern Corps — get to fight in the initial battle.  And by initial battle I mean genocidal ambush. 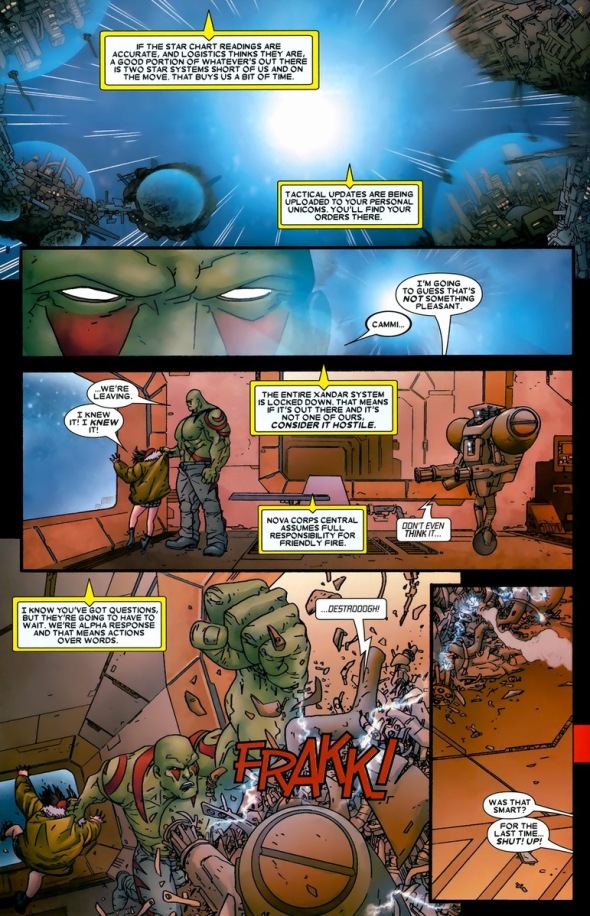 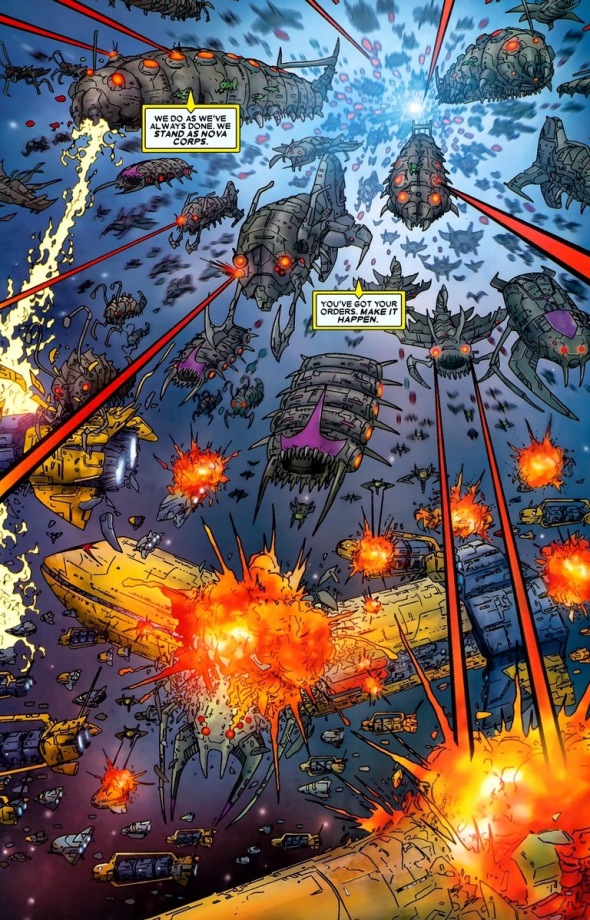 Drax and Cammi, though vital to the story, take a backseat role to the sole surviving Nova, Richard Rider. It’s understandable, considering the Annihilation: Nova series has his name in the title.  The planet Xandar, the Nova Corps headquarters, houses the supercomputer Worldmind which contains all the Nova Corps superpower energy.  It’s Marvel’s Green Lantern Central Power Battery.  With the Nova Corps all dead, Richard Rider gets all the Nova power for himself.  Every bit of it.  Also, the annoyingly sentient Worldmind.

Before all that, prepare yourself for some angst: 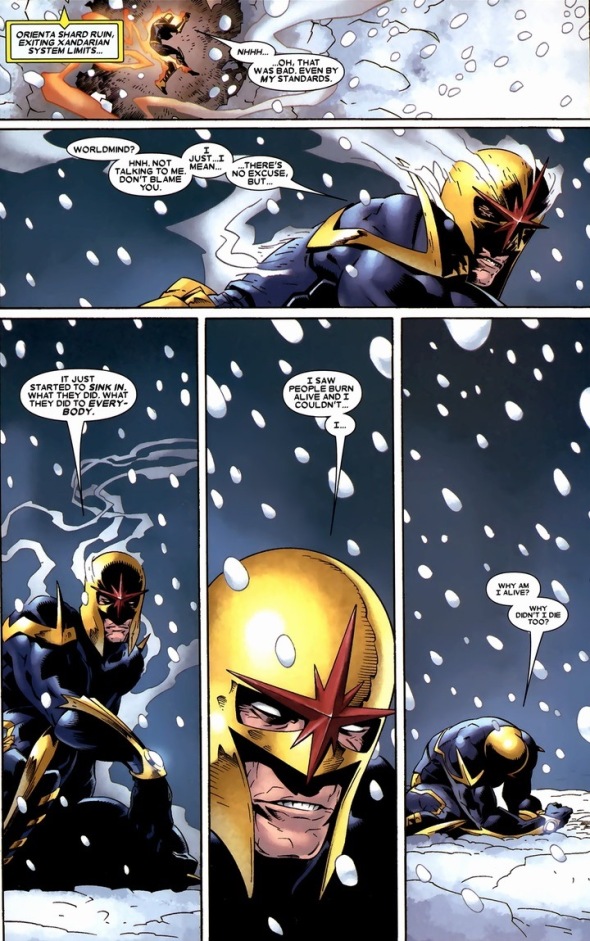 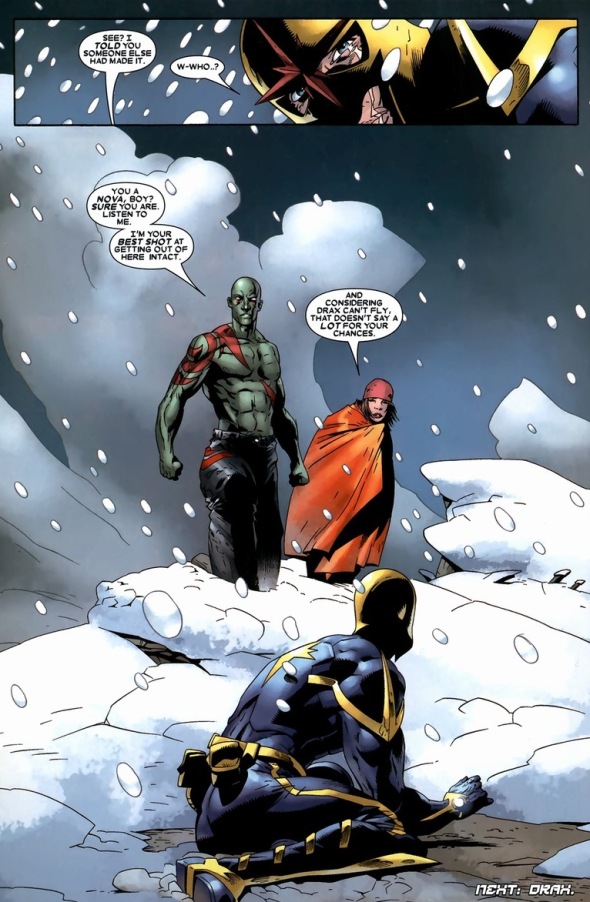 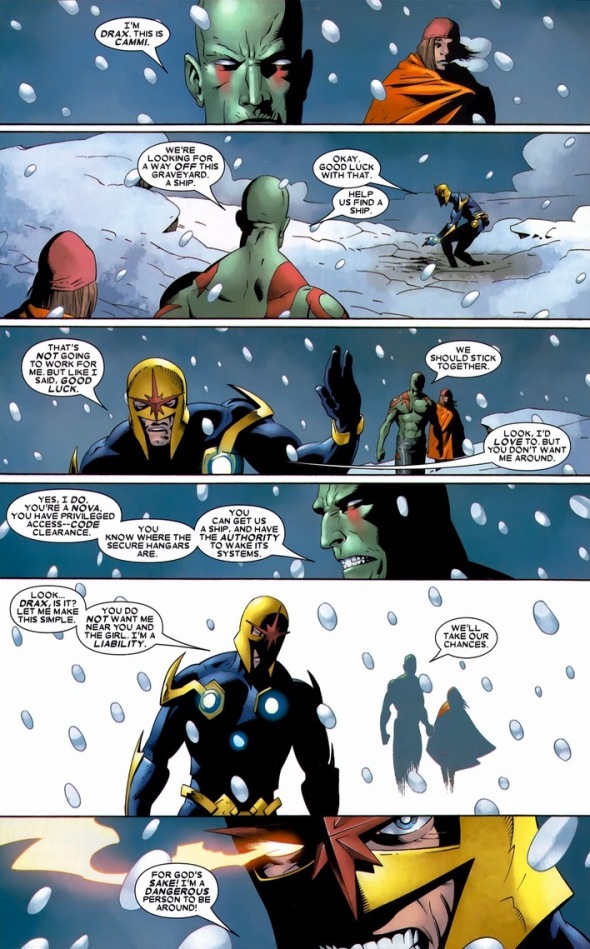 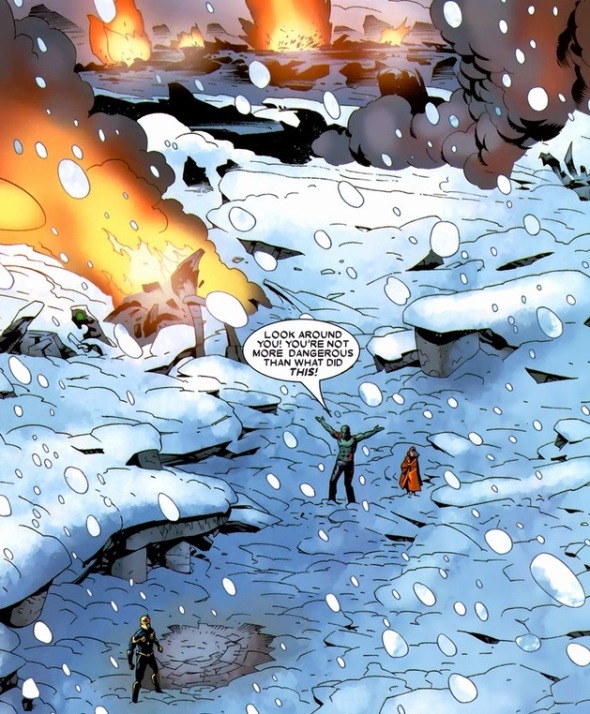 Note that not even sub-zero temperatures are enough for Drax to put on a shirt.  We’ll touch upon one of the most common and important of comic book clichés: the “I can’t do this, I don’t have enough power to save the world!” thing.  Allow Drax and Worldmind to enlighten Nova on his potential.  More Worldmind though, as Nova’s helmet contains the sole remaining computer data needed to run the hard drive or RAM or Solitaire or whatever.  I’m not very technical. 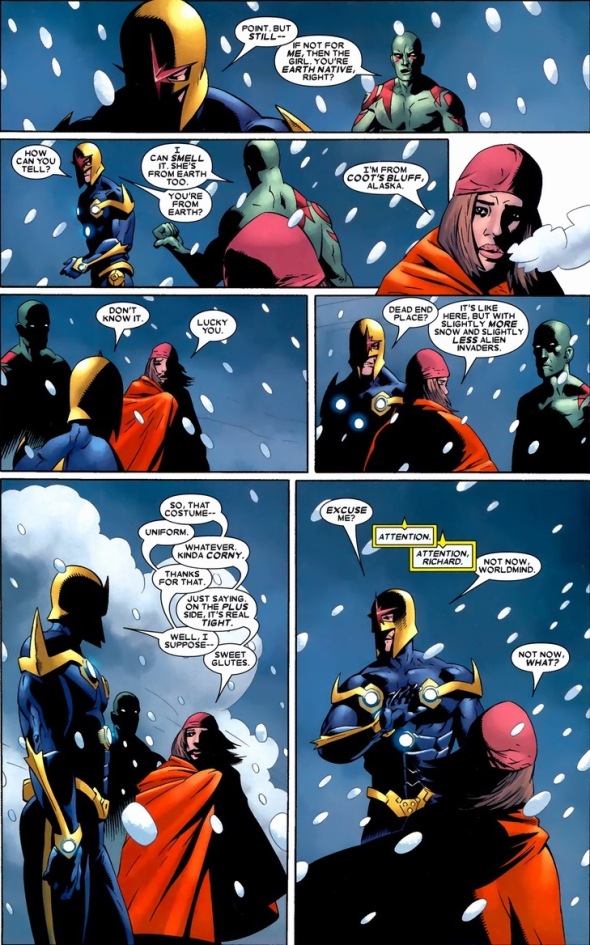 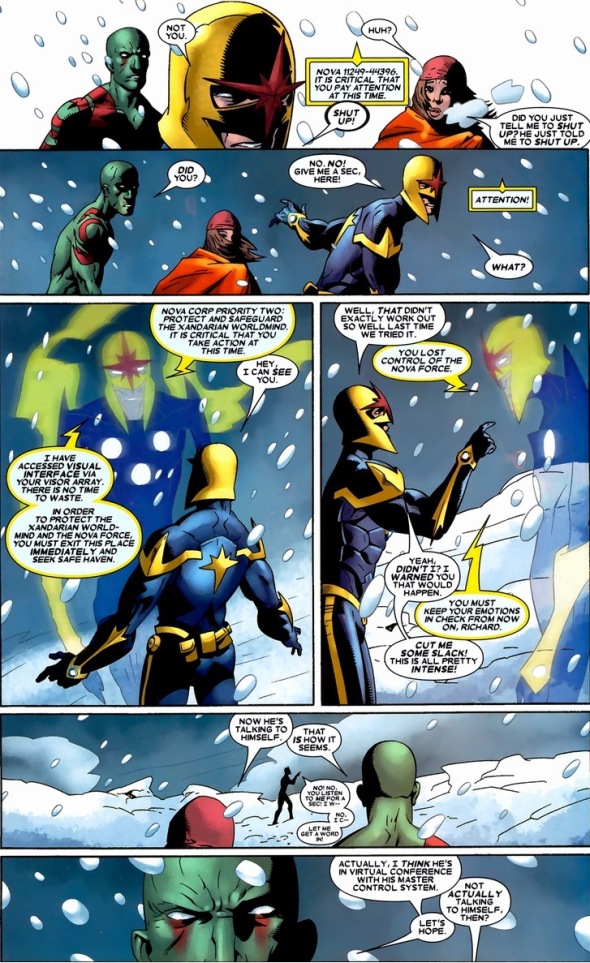 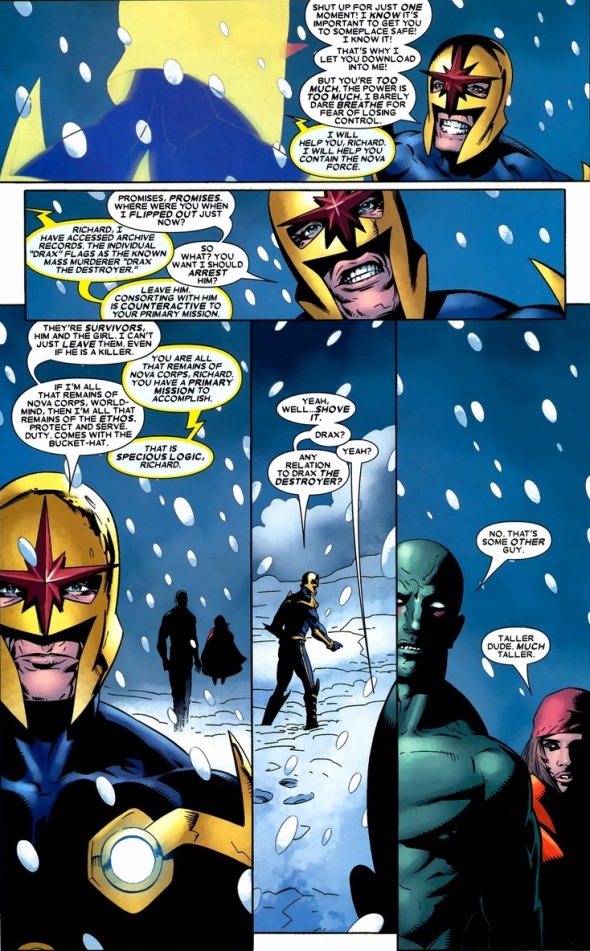 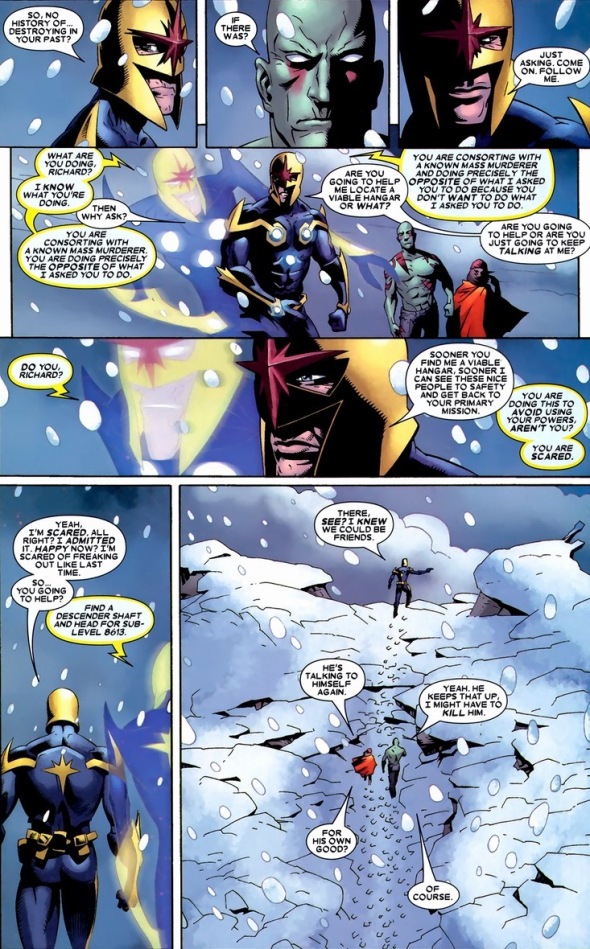 I hope you didn’t miss Cammi complimenting Nova’s butt.  I’m more impressed that a 10 year-old knows the word “glute.”   So Drax doesn’t know Rider’s the only survivor of the Nova Corps.  From all of their interactions so far, Rider’s just a weirdo yelling at a computer.  Y’see, normal Nova Corps members can’t do much, but not this Nova.  If he grows some cajones, it’ll be like Green Lantern not just having a lot of willpower but unlimited willpower.  Character growth takes time though, so we’ll have to witness some cowardice beforehand from Rider. 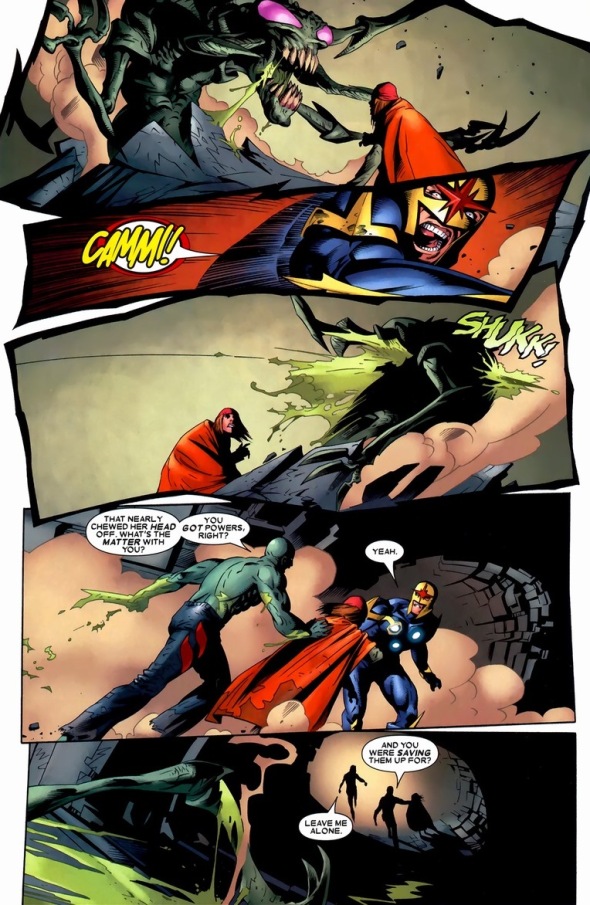 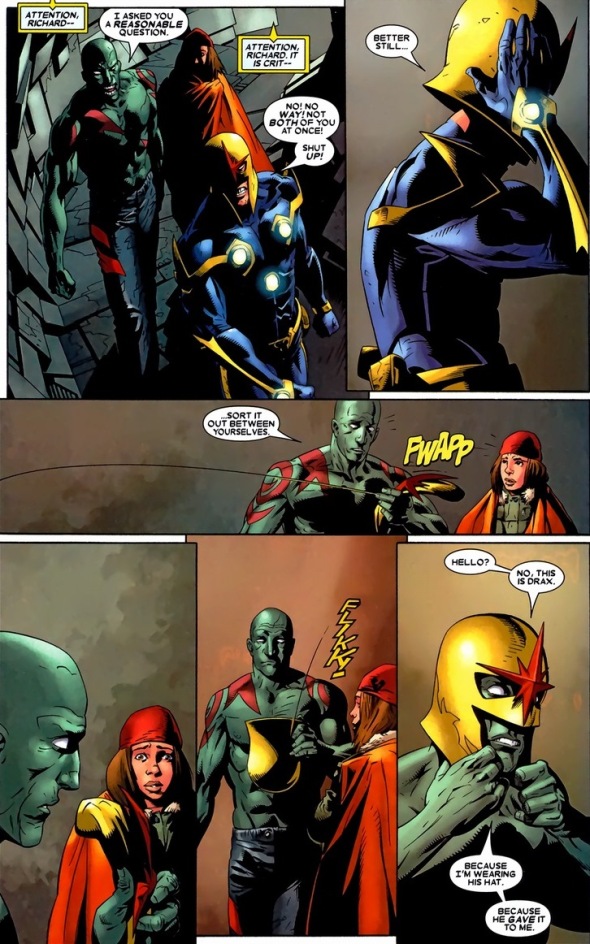 Let’s not be too harsh for poor Nova.  He did just witness an entire planet and all his co-workers spectacularly die moments before stumbling into this bug cave.  Hold out hope: Rider held the rank of Centurion before the Annihilus Wave attack — they’re the elite squad.  The dude just needs some confidence in wielding a power that could destroy planets, and who better to help than a Destroyer? Y’know, and our two protagonists need Nova to escape this planet. 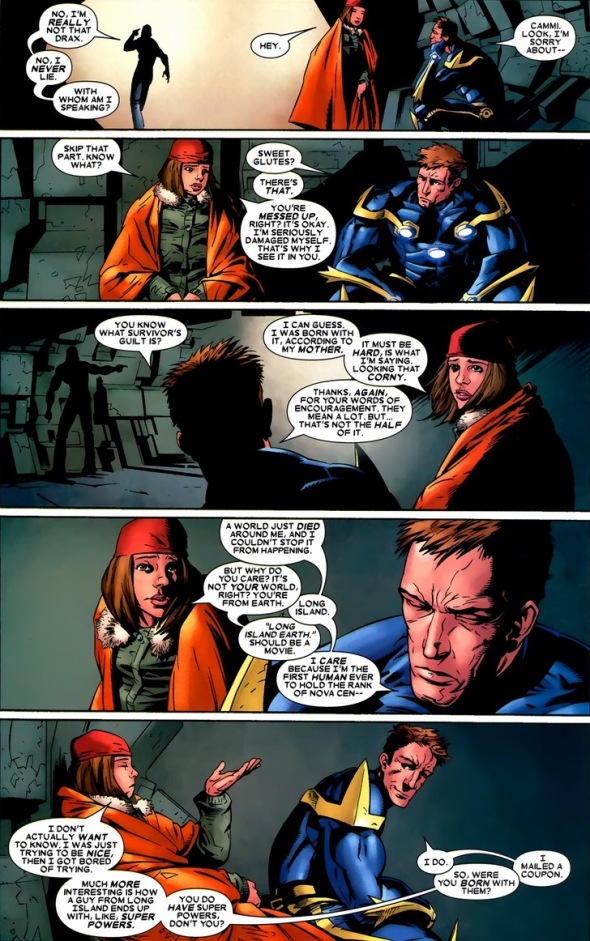 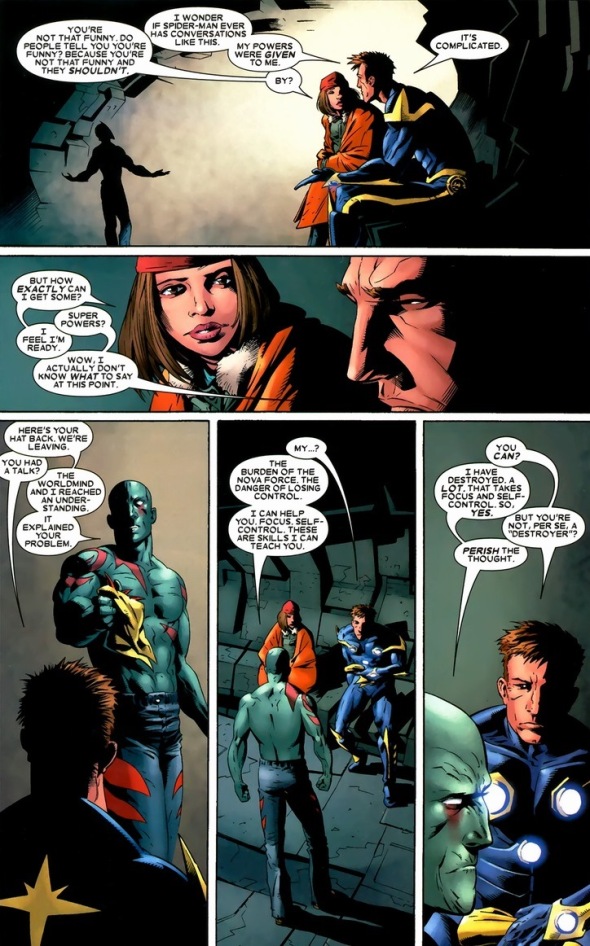 With Nova’s abilities reaching the peak they should be (and I’m skipping all the pep talks and warp portals), Drax and Cammi decide to stick around with Nova for a bit.  Drax will explain in the next page.  Mainly the best place to stand during a battle is behind the biggest gun. 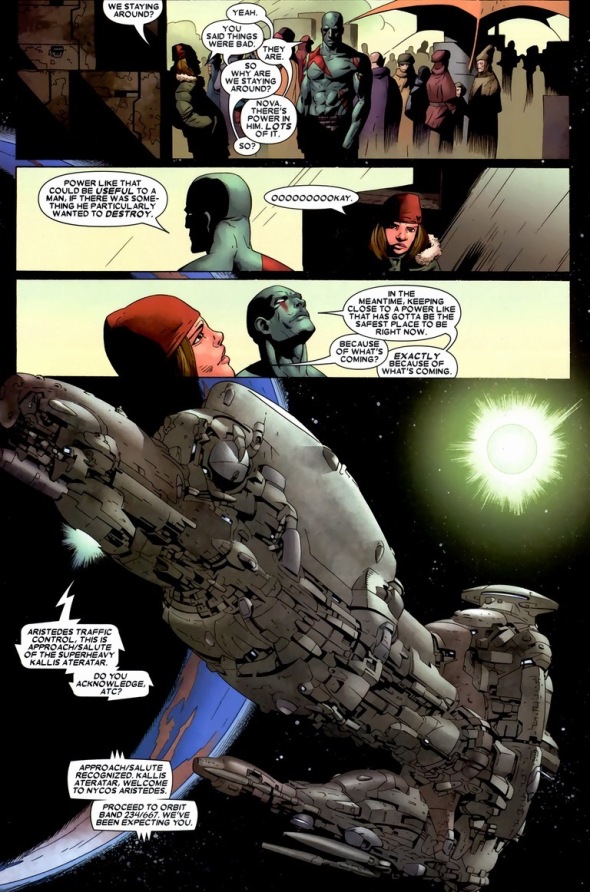 On Monday, war!  Bugs will be sliced, friendships will be tested, and the aftermath sets the stage for the beginning of that wonderful Guardians of the Galaxy team we’ll all see in the theaters today.  I’m super excited too!