← The Super-Skrull saves the galaxy, Pt. 2
Nova, Cosmo, and the monster on Knowhere →

The Super-Skrull saves the galaxy, Pt. 1

Thanks to the Marvel event Annihilation, Cosmic Marvel characters gained a much needed shot in the arm of popularity space juice or whatever they inject.  Obscure characters got resurrected and more well-known characters embraced the added screen time.  This bodes well for our protagonist during the next two weeks: Kl’rt, the Super-Skrull.  You know, like a normal Skrull but super.  Over the next three articles, we’ll cover his solo miniseries in Annihilation: Super-Skrull, written by Javier Grillo-Marxuach and drawn by Gregory Titus.  Because it’s great and I love it.

Before all that, how about Super-Skrull’s origin?  If we have to classify him, he belongs to the Fantastic Four’s rogue gallery.  They have a reputation of beating up aliens whenever try to conquer Earth, including the Skrulls in their first comic appearance.  While Skrulls can shapeshift into whatever they want, they don’t have any special abilities beyond that — so the Skrull empire created one who did.  From the classic pages of Fantastic Four #18, written by Stan Lee and drawn by Jack Kirby, meet the soldier Kl’rt, who becomes the Captain America of the Skrulls:

The Super-Skrull premiered in September 1963, the same month as the very first X-Men comic. And to be fair to the Thing, he can totally lift over 100 tons now, but because you can’t really give stats to fictional characters in an ever-evolving comic book universe, the strength-limit of superheroes is a useless stat.  Some are strong and some are really strong.  But there you go: the Super-Skrull is a normal Skrull with the combined power of the Fantastic Four.  How does he do in his first fight?  Of course he wins the initial bout, as all supervillains tend to do, but then Mr. Fantastic does that silly thing where he defeats his enemies by being way, way smarter than everyone else.  Oh, and if the art isn’t key to how old this comic is, notice Thing’s Vincent Price reference:

Y’see, here’s the conundrum of the supervillain.  Practically every bad guy overpowers their respective superhero, but comic book characters live in a world where good will always if not eventually triumph over evil (as it should be).  So despite the Super-Skrull being the toughest, meanest, and most powerful Skrull in the Marvel universe, his track sheet only marks down loss after loss after loss.  It’ll come back to haunt him, but for now, time to jump into the middle of the Annihilation war.

The dude’s a middle-aged man now.  If we assume the Marvel universe is on a sliding scale of ten to fifteen years, that’s a decade and a half of the Super-Skrull fighting in every skirmish, conflict, and war in modern Marvel history.  He has a reputation, y’know.  And that’s kind of where the problem lies.  I mean, the Fantastic Four defeated Galactus — the Super-Skrull is all four of them rolled in one, but when he announces above that he “[doesn’t] care much for anyone’s opinion but [his] own,” well, that’s a lie.  A big fat lie. 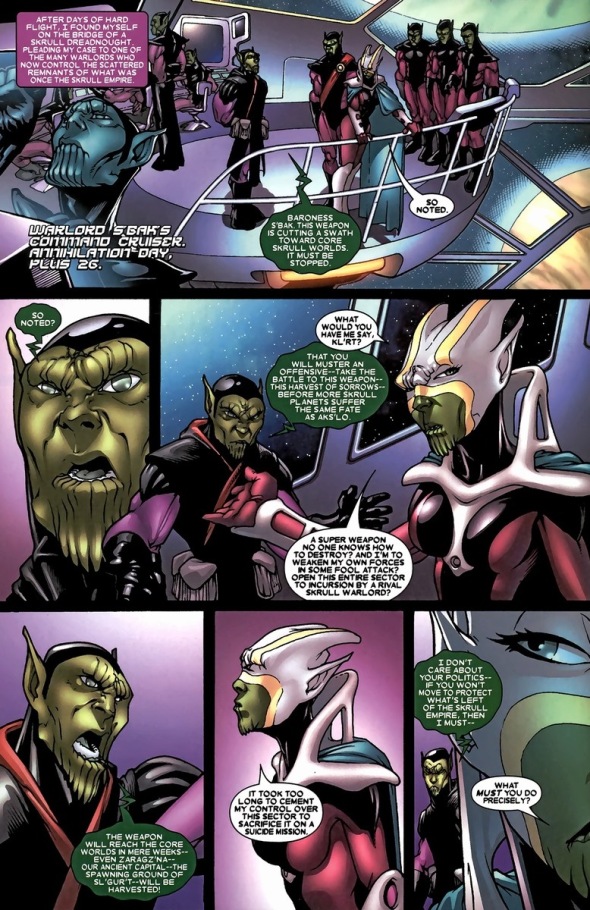 Temper aside, the Super-Skrull makes a legitimate point.  The Harvest of Sorrows (called Harvester of Sorrow later), one of the Annihilation Wave’s superweapons, destroys whatever planet it comes across — think of it as a bug version of the Death Star.  It needs to be stopped, especially for Skrull history to remain intact and kickin’.  But that’s the thing about the Super-Skrull because like most supervillains, his loyalties lie mainly with whatever goal he’s attempting to achieve, not to any specific group of faction.  So in an ironic twist, Kl’rt must kill a whole bunch of Skrulls to save a whole bunch of Skrulls.  Plus he gains a sidekick, the indicator of any successful miniseries.

I’m going to skip his violent escape from the warlord’s ship, but I do want you to start picking up on a constant theme: the Super-Skrull’s obsessed with this idea of a “hero’s death.”  A martyr isn’t remembered for their previous misgivings if their death means something more.  What better way for the Super-Skrull to redeem his years of failure than by saving the Skrull empire with his sacrifice? That’s a bedtime story Skrulls’ll tell their grandkids for centuries. 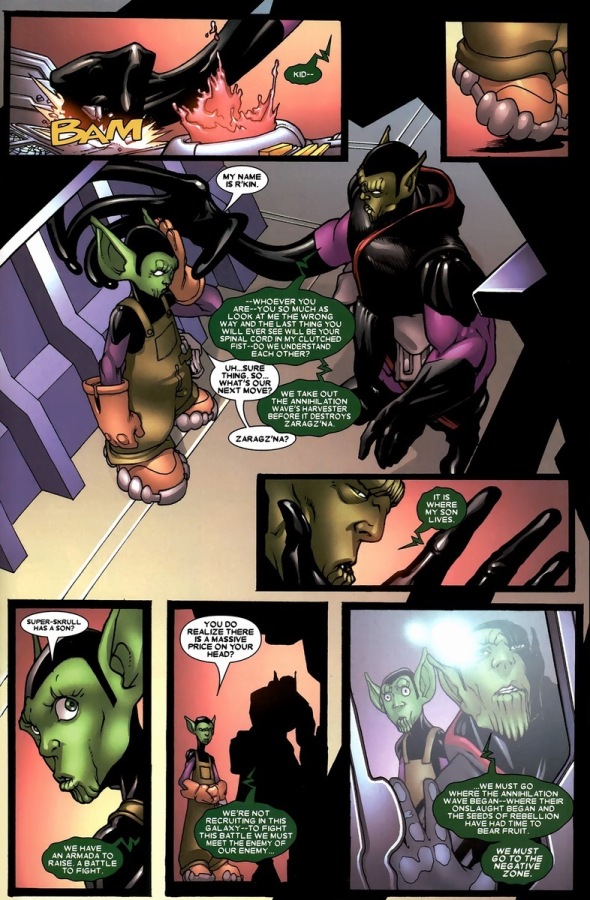 A higher stake gets added.  If Super-Skrull fails to destroy the invincible Harvester of Sorrow, his son dies.  His legacy perishes in a bug explosion.  Because he punched a Skrull warlord, Kl’rt can’t recruit a Skrull army of his own.  He’ll have to settle for the second toughest, meanest, and most powerful aliens in the Marvel universe — the Negative Zone prisoners.  After all, the Annihilation Wave all came from the Negative Zone and they’re kicking the galaxy’s butt.

Oh, and know who has the only bug-free portal into the Negative Zone?

On Friday, the fight against the Harvest(er) of Sorrow(s) begins!