Hulk and Thing: a monster conversation

And a monster fight.  I wouldn’t post an article between these two behemoths without some punching involved.  Today, they get some extra therapy in a philosophical conversation between the only two people on Earth who understand what the other is going through.  Mainly being hideous monsters who just want do some good, be left in peace, and not let the self-loathing become overwhelming.  As happy as these two superheroes can eventually be, everything’s always covered in a thin layer of sadness over their unwanted transformation.  Sure, super strength’s nice, but being a Frankenstein-esque/rock creature isn’t.  In Fantastic Four #533-535, written by J. Michael Straczynski and drawn by Mike McKone, our two protagonists bond just a little bit more — in between the fistfight anyway.

Oh, also the government is trying to take away the Fantastic Four’s kids, but I’m ignoring that part.

Rampaging, out-of-control Hulk lists among the top five worst possible disasters in the Marvel universe (number one is Norman Osborn’s hair — cue rimshot).  Bullets bounce off Hulk, he only gets stronger the longer he fights, and the Hulk could level entire military bases with one good jump.  So time to knock some orange rocky sense into the green monster.

I don’t know why this Hulk’s grey.  He can talk too.  The color and intelligence level of the Hulk varies practically every other issue.  For now, the gamma bomb explosion made him grey and smart.  I do apologize, because the fight lasts a good issue and a half, but I’m going to skip most of that too.  I’m not a total jerk: here’s a small taste. 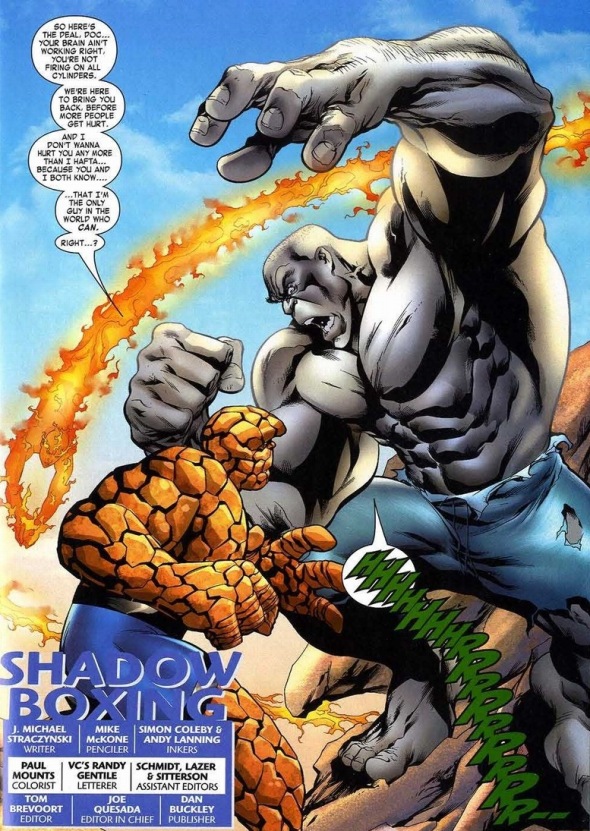 Ben Grimm brings up our theme today: monsters.  No matter how good the intentions, no matter how noble the actions, the Thing and Hulk will always leave some sort of destructive mess in their path. That’s just part of the price of being super strong brawlers.  But as the gamma bomb makes the Hulk hallucinate green thoughts, we get a deep look at the inner pain our poor Hulk goes through. 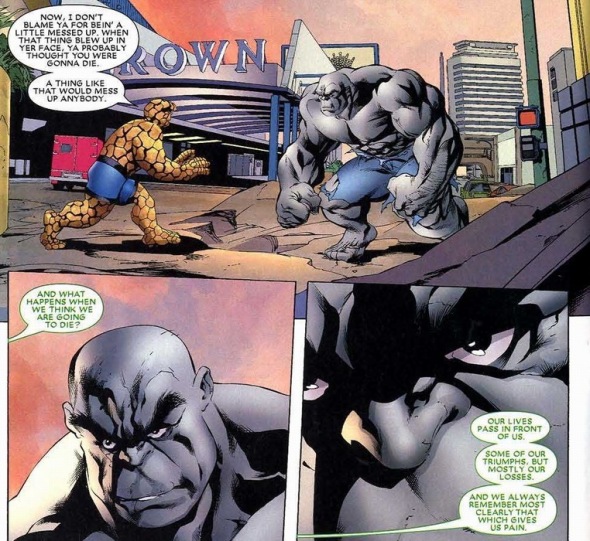 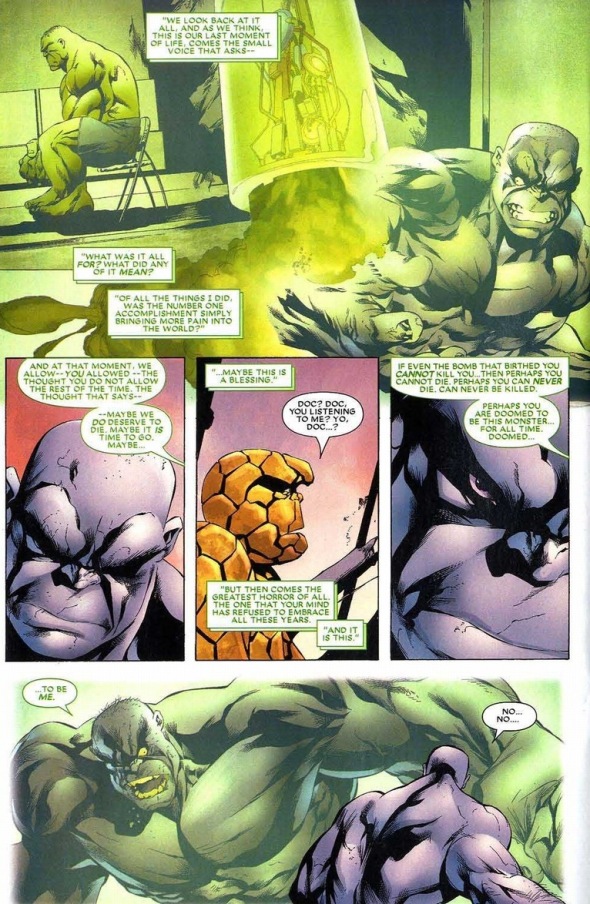 Brilliant writing.  Of all the people in the universe that the Hulk hates, of course he hates himself the most.  Can any superhero compete with the Hulk in sheer number of accidental civilian deaths?  With the Thing, we all agree that he’s making the best of a terrible situation, but with the Hulk, a genuine question needs to be asked: has the Hulk been a force of more good or bad in his life?  Not the genius scientist Bruce Banner, I’m talking about the Hulk.  That green rage monster that wipes out towns whenever someone bullies meek Banner in a diner.  The Avengers nowadays mostly just point Hulk in the right direction, using him as a weapon to toss at tough opponents rather than a valued ally and component of the team.  I mean, I’m generalizing here, but it’s an interesting question to ponder.

One question we do know the answer to though?  Nothing can kill the Hulk.  Part of the Hulk’s pain and major appeal is the doomed-to-walk-the-Earth-forever thingie because of his almost-invulnerability. Yet I admire those who try anyway. 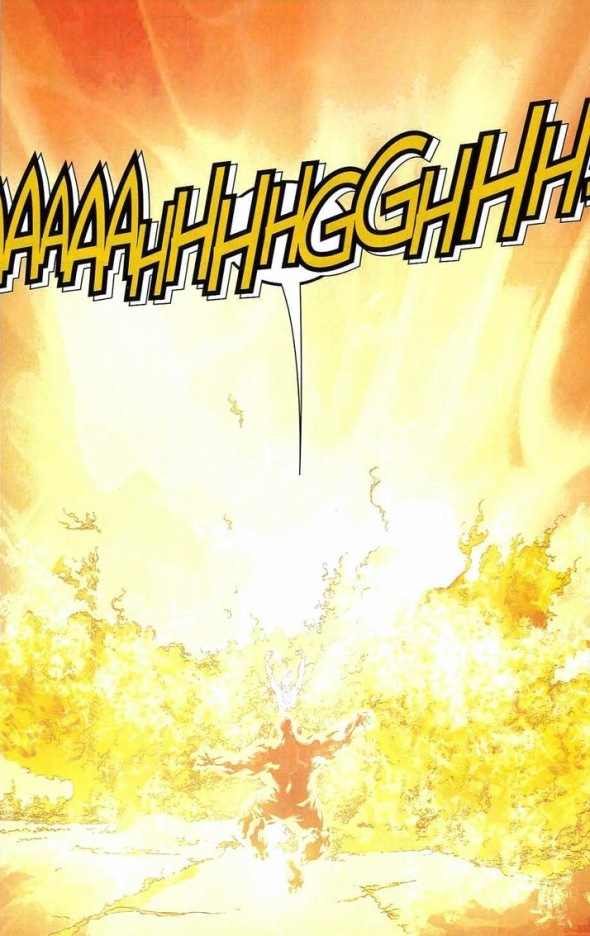 The day I stop reading comics is the day I’m no longer delighted by a giant full-page fire blast.  Spoiler alert: never.  Y’see, today the Hulk learns acceptance.  And that’s something the Thing learned a long time ago.  One can’t walk around for a decade as the Thing without understanding how to live daily life as an ugly, dangerous, clumsy, frightening, frustrated rock monster.  The Hulk can’t die and the Thing can’t be cured.  They simply learn how to adapt.  When they’re not saving the world.

I guess the article title’s misleading, as their conversation only takes place in the last three pages of the arc.  It’s still important, so read it twice.  I had trouble getting the nuances of it the first time around. 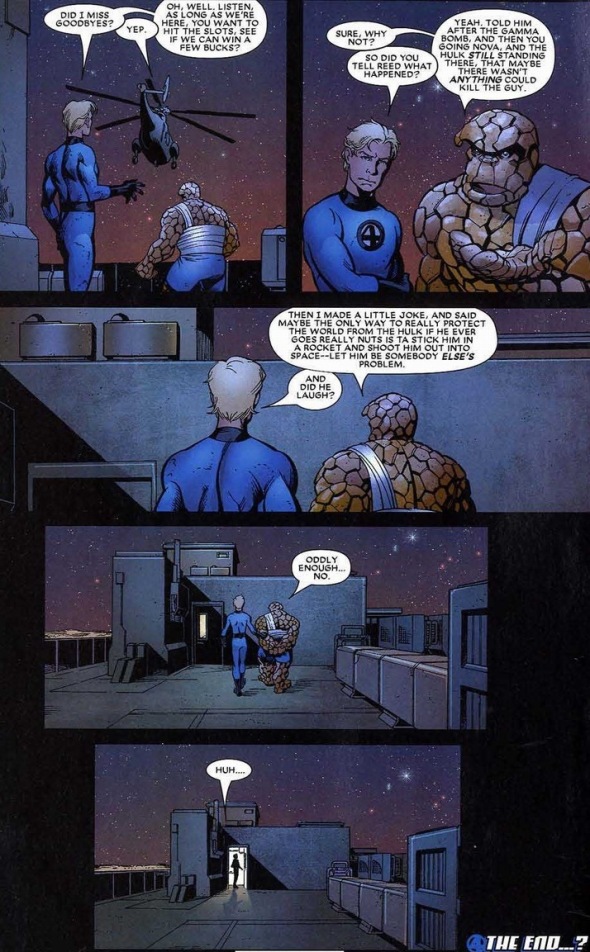 On an interesting note, this issue was published the exact same month Planet Hulk started (the whole shoot Hulk into space to be someone else’s problem solution).  It’s a fun little meta joke.  On Friday, we return to Cosmic Marvel once more for a Nova versus Nova fight!

5 Comments on “Hulk and Thing: a monster conversation”