So after Azrael goes mad with power, almost strangles Robin, and assaults Batman while Azrael’s dressed like a robot, he gets put on a probation by Batman.  As in, the Dark Knight doesn’t trust him, like him, or want to be around him.  And after Azrael screws up an undercover police job, it’s time for Bruce Wayne to let Azrael know the bitter truth — he’s a sucky vigilante.  In Azrael #36-40, written by Dennis O’Neil and drawn by Roger Robinson, our dear Jean-Paul Valley has one last chance to prove himself by taking down the biggest, scariest, most powerful supervillain in Batman’s rogue gallery. 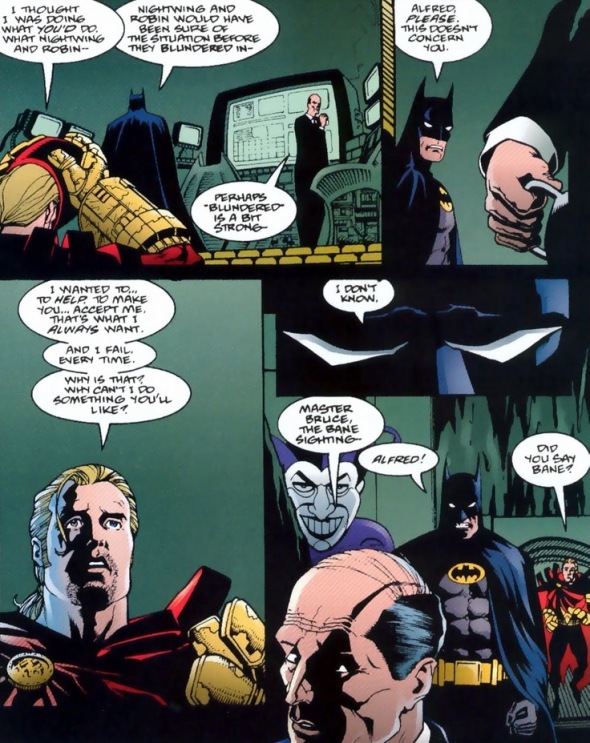 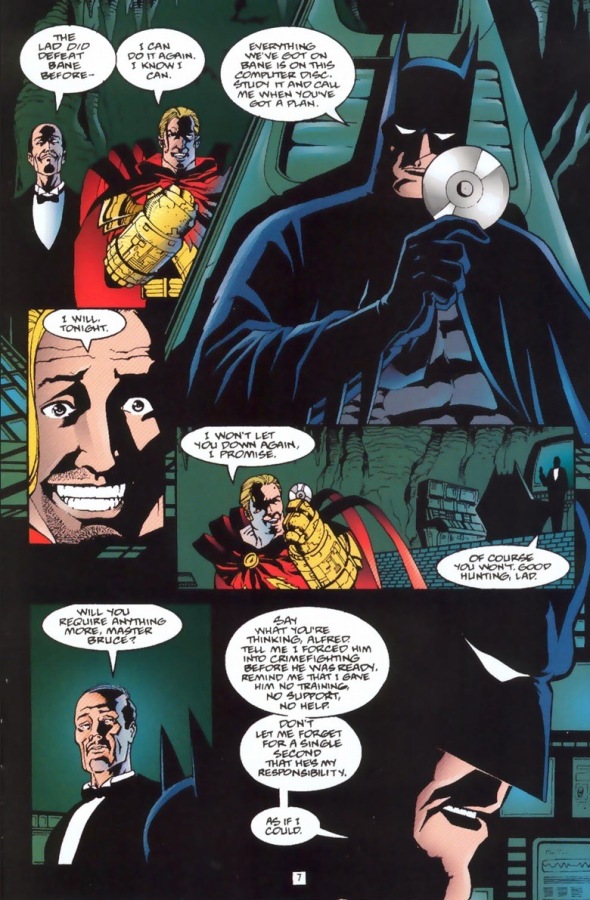 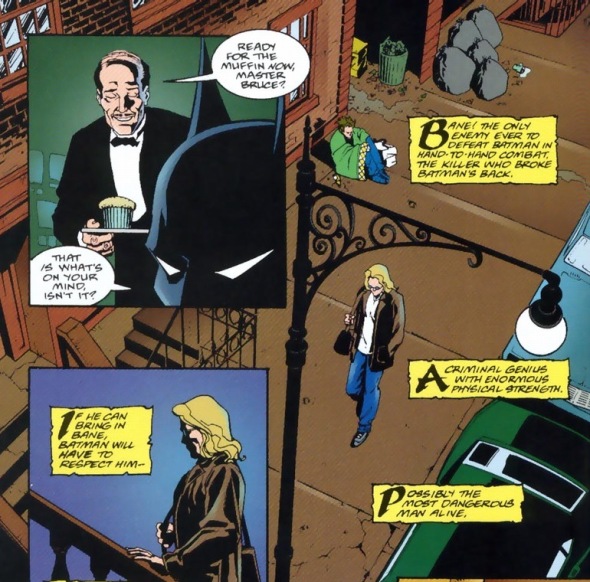 Seriously, conversing with Batman is like talking to your dad when he’s not angry, just disappointed. As usual in a crimefighter’s life, everything goes bonkers at once and Azrael misses his deadline. Also, love interests and stuff, but that’s off topic.  And let’s be fair to Azrael, he’s mentally ill trying desperately to impress another mentally ill man who may be legitimately impossible to impress. Batman can’t even meet his own standards — what chance does the Batfamily have?  But the stakes remain the same: Jean-Paul brings in Bane or Batman’ll punch Azrael out of crimefighting forever. 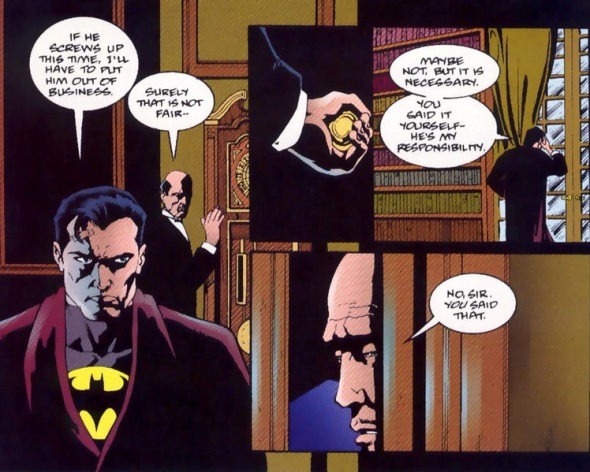 Here’s how you know Azrael’s on Batman’s bad side: he makes Azrael fly coach.  Even Robin has his own plane.  For those not in the know (including me about two weeks ago), Nomoz helped train Jean-Paul into Azrael way back in his origin comic.  He’s the sidekick for this arc so Azrael doesn’t have to talk to himself the whole time.

There is a greater theme here spread throughout the pages.  Jean-Paul’s constantly conflicted between his identity as Azrael and himself.  He can’t fight crime without becoming Azrael, but he hates Azrael’s cruelty and violence.  It’s a schizophrenia shaped by his dead father.  Oh, and check out that the dude’s back in his “default” costume.  Of the six Azrael articles I’ve done so far, he’s had three different outfits. 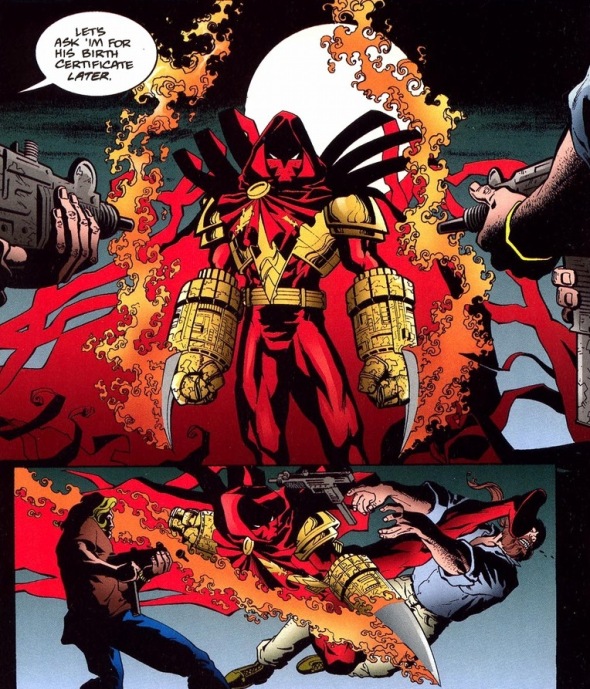 Need further proof that Azrael’s the most ’90s superhero that ever existed?  He has fire coming out of claws. And the claws are attached to giant golem hands.  You can’t get more extreme ‘tude than that.  And the cape’s not even practical — it’s looks like it’s made out of ribbons pieced together from a Hobby Lobby shopping spree.

I’m no historian, but after the super gritty, dark, realistic comics of the late 1980s, the medium compensated with brighter, supernatural, “extreme” adventures.  The 2000s reacted to that by making comics dark again.  Nowadays, we’re in a resurgence of comics written with a lighter touch.  In five or six years, we’ll repeat the infinite cycle — after all, the 1980s came as a response to the trippy, magical LSD-fueled journeys of 1970s superheroes.  For reference, you’re currently watching Azrael kick henchmen butt in 1997.

Remember how Azrael beat Bane the first time?  He took out Bane’s venom supply causing the supervillain to freak out enough for the lucid Azrael to knock him out.  Bane’s off venom now.  Our poor protagonist has to fight Bane in his purest, non-addicted state.  That’s pretty much why he gets his butt handed to him.  Plus, we have three issues left in our arc.  Sadly, Bane only spares Azrael’s life to give him a greater pain: prison justice. 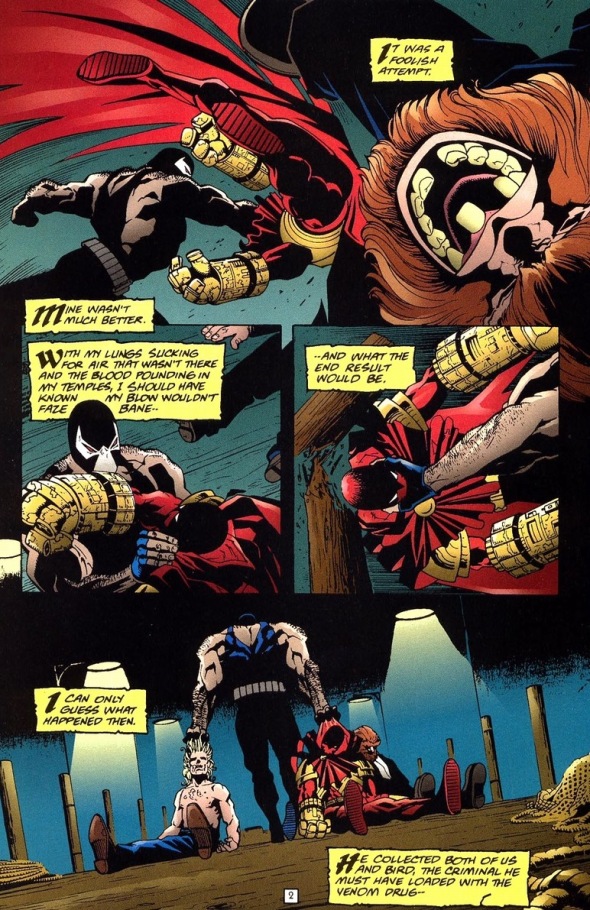 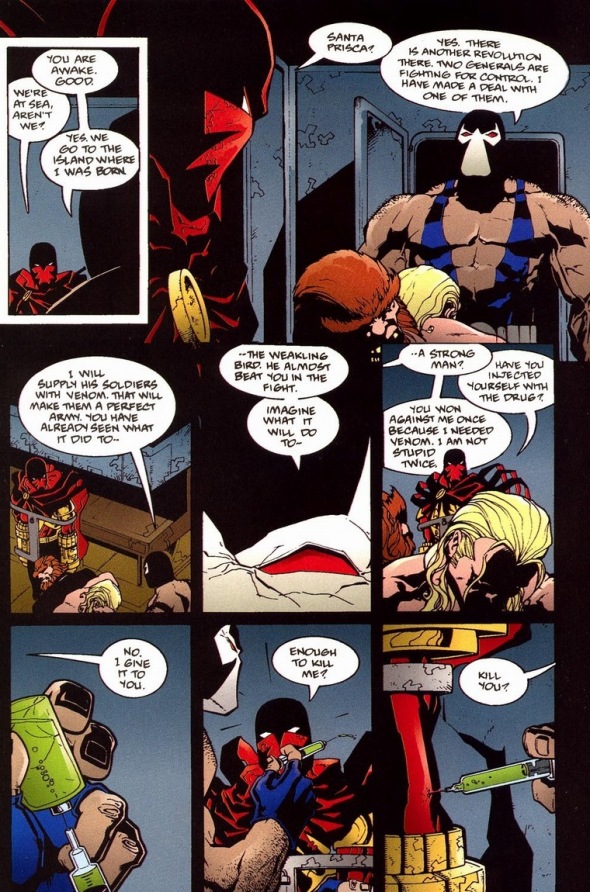 Venom’s beyond addictive and no rehab center exists for this sort of ailment.  See what it’s doing to Bird?  If you need more evidence, Batman once succumbed so horribly to venom addiction that it took him a month locked in the batcave of sheer willpower and crazy hallucinations to break it.  Actually, we’ll cover that story next because it’s really good and serves as a prelude to Knightfall.  And Azrael’s withdrawal?  That comes soon, but first, they have to inevitably escape from being tied up and make a terrible situation much worse.

On Friday, we get our exciting conclusion, and by that I mean several pages of Azrael sweating and crying.