Some venom addicts don’t get the luxury of being locked in the Batcave for a month with a lush supply of food and the eternal worry of a dutiful butler.  Nope, some have to sweat out the toxin the ol’ fashioned way: prison.  Maybe.  I’ve only seen a few episodes of Lock Up.  But today in Batman: Vengeance of Bane II, written by Chuck Dixon and drawn by Graham Nolan, Bane beats his most dangerous foe yet: himself.  Well, his third most dangerous foe.  Batman’s number one.  Azrael’s number two.  Then himself.

Look, he’s in prison and has no access to venom.  So he’ll break the habit like he broke Batman. 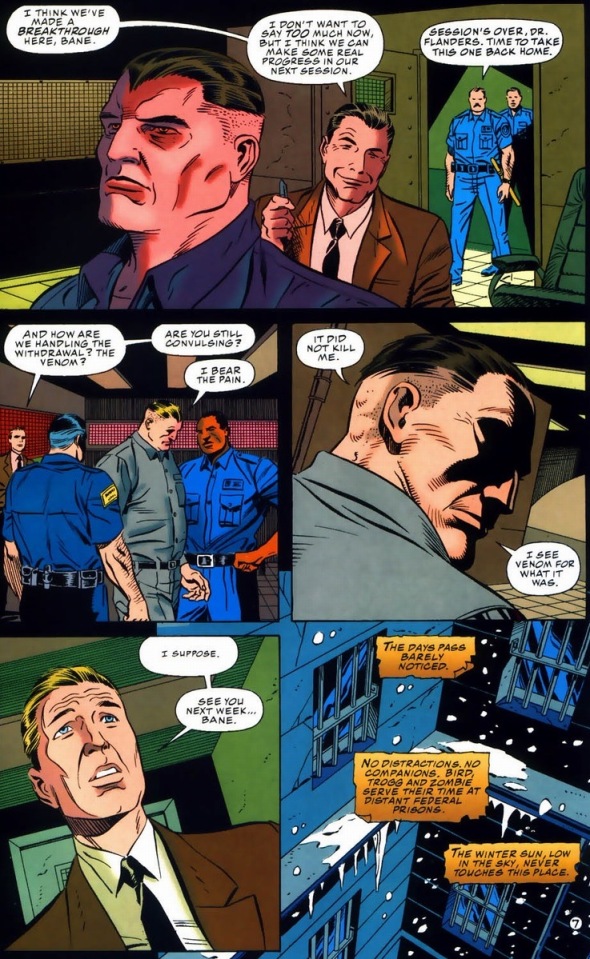 KGBeast beats him up after this.  Don’t worry, Bane shows the commie who’s the real boss later in the issue, both scenes I’m skipping.  But our theme persists: Bane struggles with his own identity — y’know, the whole being born and raised in a Santa Prisca prison because of a crime his father committed.  It’s a brilliant example of nurture over nature, and during his whole Rule Gotham phase, venom made sense.  No more.  No medicine, no help, no shortcuts.  Because he’s Bane.  Physical, mental, emotional torture?  That dude’s ready. 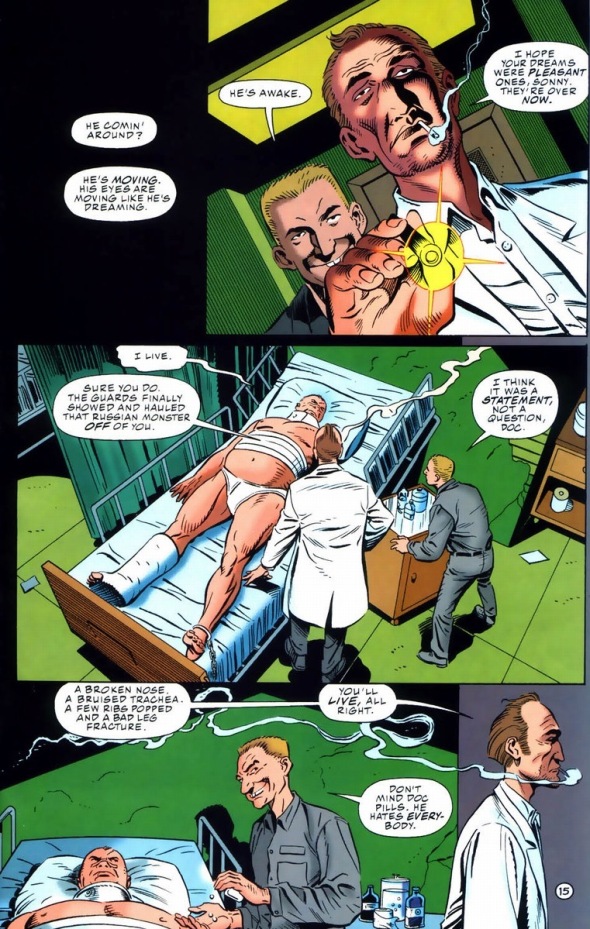 He won’t be able to beat his addiction with other people nearby, especially KGBeast running around and punching him through railings.  Note that Bane’s not in Arkham Asylum; they stashed the brute in Blackgate Prison instead.  There’s nothing insane about Bane, even when stuff like this happens: 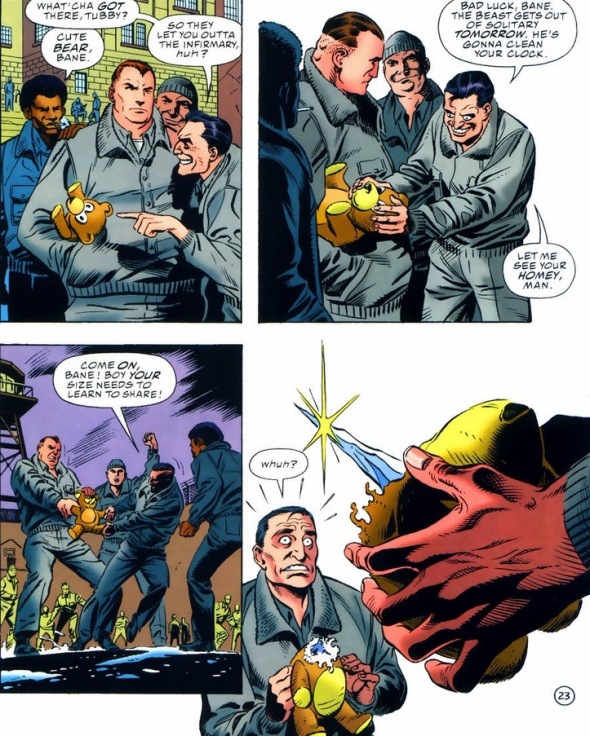 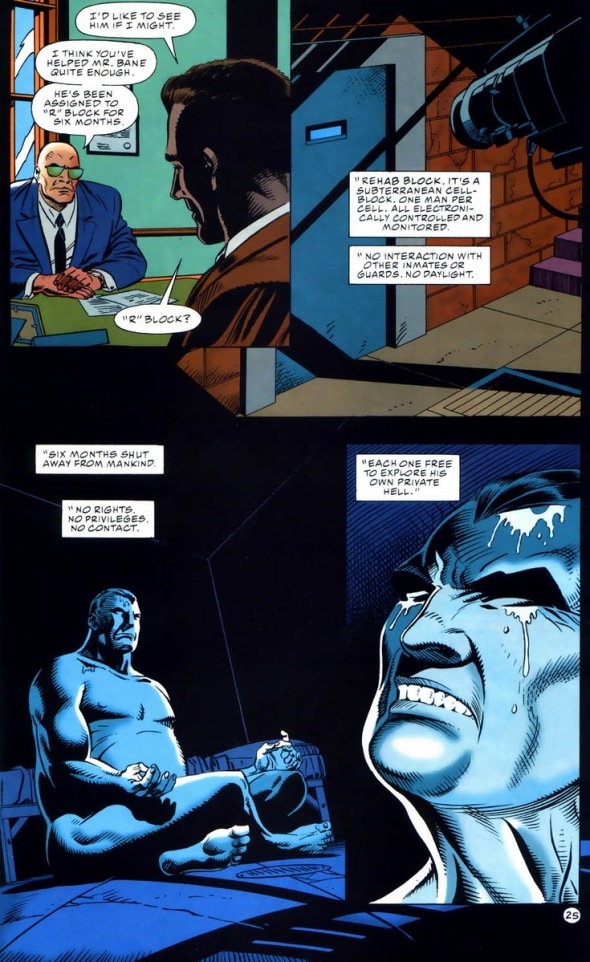 I don’t think that kind of prison cell is allowed to exist in our real world, but bad guys who put on luchador outfits and fight other grown men in bat costumes don’t exist in our real world either.  And Bane’s real motivation for beating venom?  Not vengeance, despite the title of the one-shot we’re reading.  No, y’see, Bane’s been wronged by the world.  By society.  By his father.  What sins did he commit besides being born in a third-world hell to a fugitive parent?  Nothing, of course.  Y’know, if we ignore all the assaults, murders, arson, mayhem, property damage, etc.  Seriously, it’s a long list.  But to Bane?  Well, venom serves a distinct purpose in his past life.  More on that later. 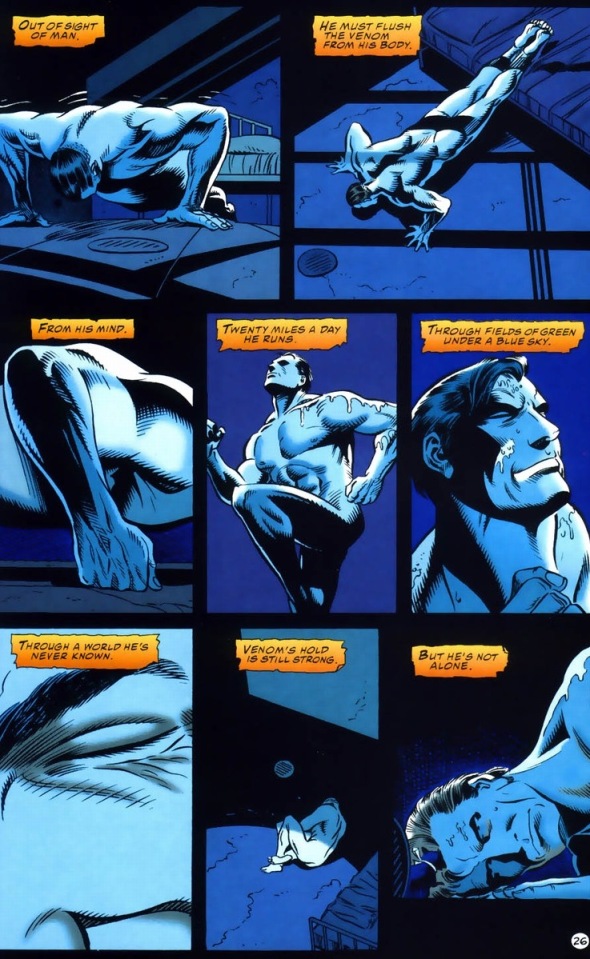 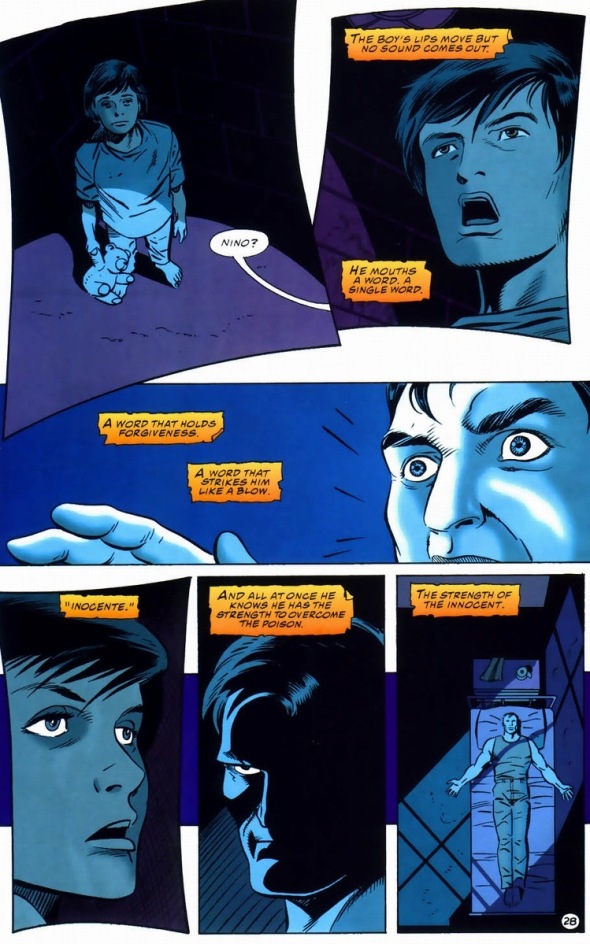 You saw chubby Bane earlier in the story, and the six months of darkness and exercise does wonders for his physique.  Bane’s mission now demands he breaks out of Blackgate (like how he broke Batman), and a real prison doesn’t have the revolving door that Arkham Asylum gets.  I’m also skipping that part.  It’s a sixty-four page issue, so there’ll be a lot I can’t cover.  Oh, and on an unrelated note, do you know Bane’s real name?  You shouldn’t.  It’s never been revealed.

He escapes Blackgate.  For those confused about his claim of innocence earlier (like I was when I read it), Bane’ll attempt to explain his theory to Batman.  His thought process still borders on a psychopathic delusion due to his supervillain nature, but if we all pretend we’re enormous luchadors, maybe we can grasp his idea. 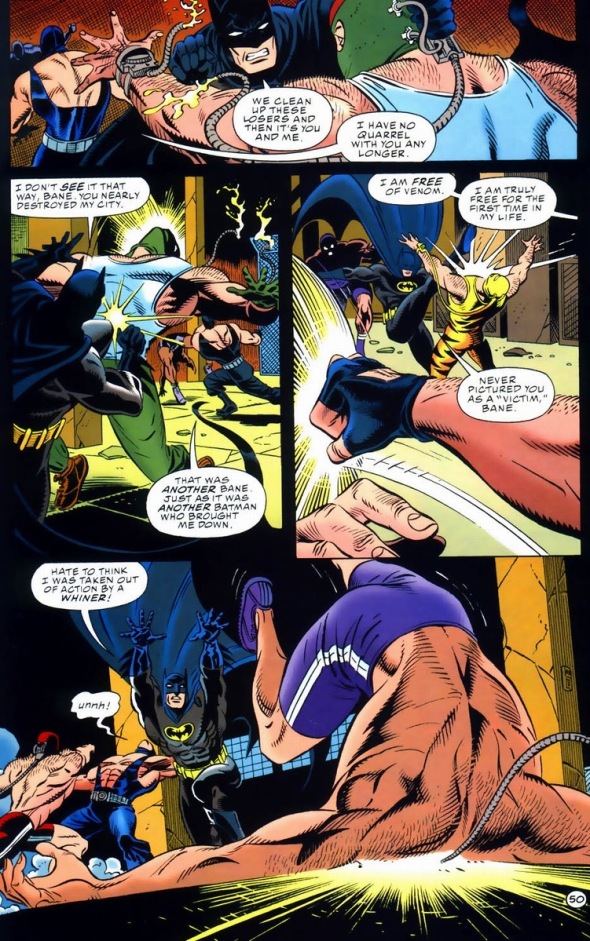 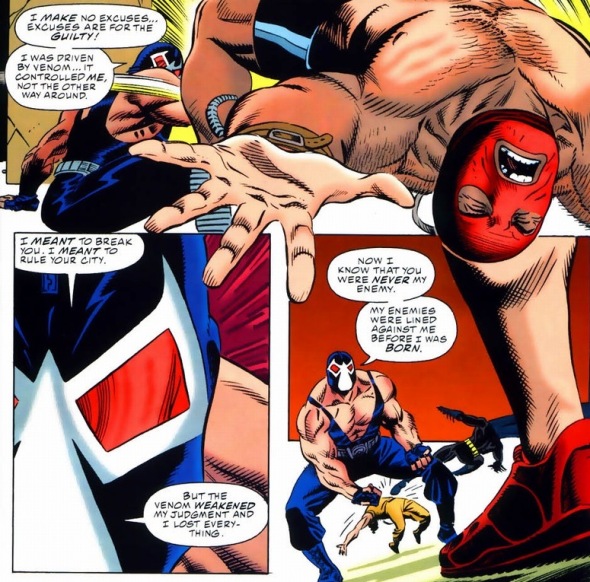 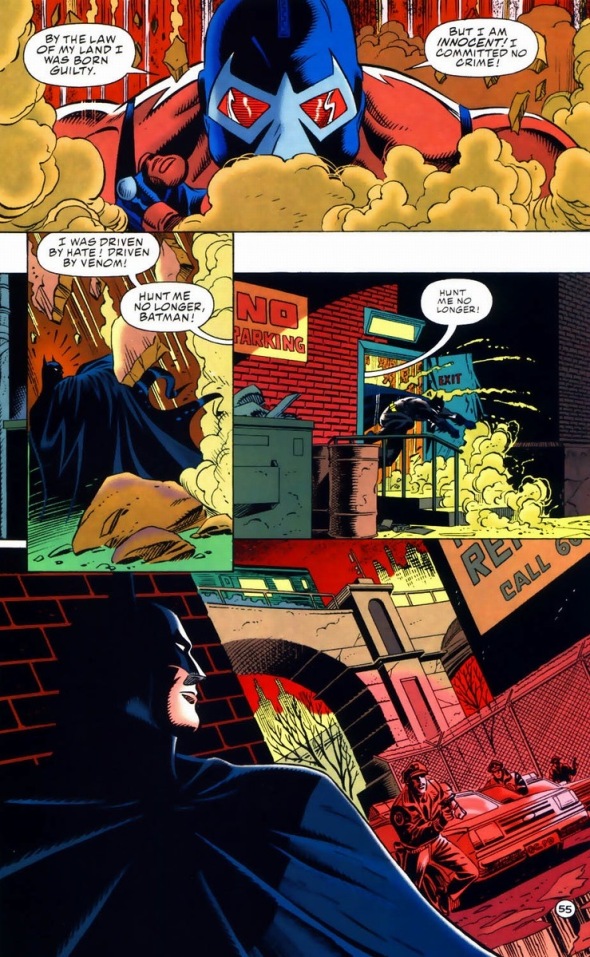 So there you go.  My best guess?  Bane blames the venom for causing him to lose against Azrael and his empire to topple.  The addiction controlled him, and you know who controls Bane?  Darn tootin’ — no one.  But most importantly, venom debilitated him — he fought Azrael at a level below his very best (the dude lost his confidence when Azrael cut his supply) and that sure as hell won’t happen anymore. Oh, have you read Secret Six?  Bane’s amazing in that series.