Before we begin, here’s for my fellow Jews:

Today a single stoic tear rolls down my cheek as we’re ending our eleven part, month-long series of articles about everyone”s favorite (and the wettest) superhero.  I’m serious this time.  On Friday, it’s Batman.  Y’see, as I was putting together the images for last time’s article about the whole piranhas eating Aquaman’s hand, I perused a bit of the next issue.  And it’s awesome.  And because it’s awesome, I’m going to beat this dead horse until it’s mushy and unrecognizable.  To hush any naysayers who believe Superman would destroy Aquaman (and let’s be fair — 99 times out of a 100, he would), I present to you proof that Aquaman at least can hold his own.  Spoiler alert: it involves water.  Let’s take a look at a scene from Aquaman #3, written by Peter David and drawn by Gene Gonzales & Martin Egeland.

Remember how Aquaman just lost his hand like the final page of the issue before?  Surprisingly, he’s taking the maiming pretty well considering.

So Aquaman spends the whole issue attempting to visit this Admiral Strom mentioned above.  It turns out one of the Navy’s nuclear subs disappeared.  And that makes Aquaman the best superhero for the job.  Like the Air Force would call Hawkman or whatever.  But since this is a comic book, nothing’s ever so easy as a simple meeting with a simple admiral.  Also, it’d be a really short issue. Nope, you know the drill — there’s a misunderstanding that results in unnecessary punching.  We’d expect nothing less. 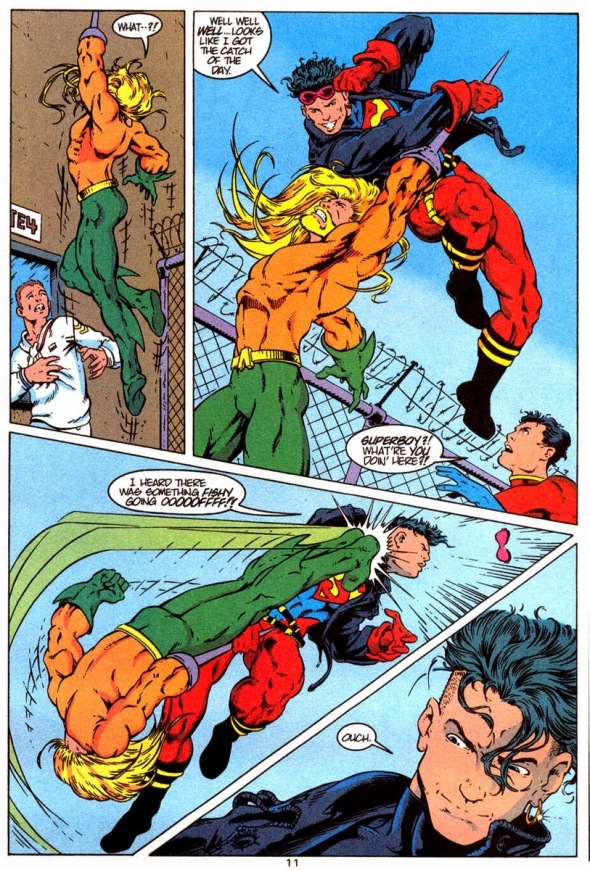 Oh, Superboy is ’90s comic book perfection.  So much ‘tude.  Earring, leather jacket, sunglasses, horrific haircut.   Originally premiering in 1993 as the Metropolis Kid (one of the four Superman replacements after Superman’s death), he now gets the honor of almost being hurt by Aquaman. Sure, the former Atlantean king has oodles of super strength, it’s just not enough to do stuff like injure a member of the Superman family.  Aquaman can punch sharks into goo, but Superboy can do that to moons.

You can click the picture below for a larger version.

Superboy’s “ass” joke is clever and you should have chuckled to yourself when you read it.  In summary, I greatly enjoy butt humor.  So yes, Aquaman doesn’t stand a minnow’s chance of victory in a fistfight against Superboy.  Of course he doesn’t.  No one stands a chance against the Superman family in a fistfight.  They punch moons into goo and all that.  Luckily, there’s a few weaknesses to exploit — and it’s awesome:

That’s right, Aquaman doesn’t control water.  But a whale army can.  Surely, Superboy can freeze the tsunami with his super breath and then flick Aquaman into unconsciousness, right?  Probably.  But not this time.  Ambush and whatnot.  Also, that’s a crapload of water.  Like this attack may actually change the ecosystem of the city.  I know why I love Aquaman now.  It’s because he can do stuff like this.  Dude’s a badass. 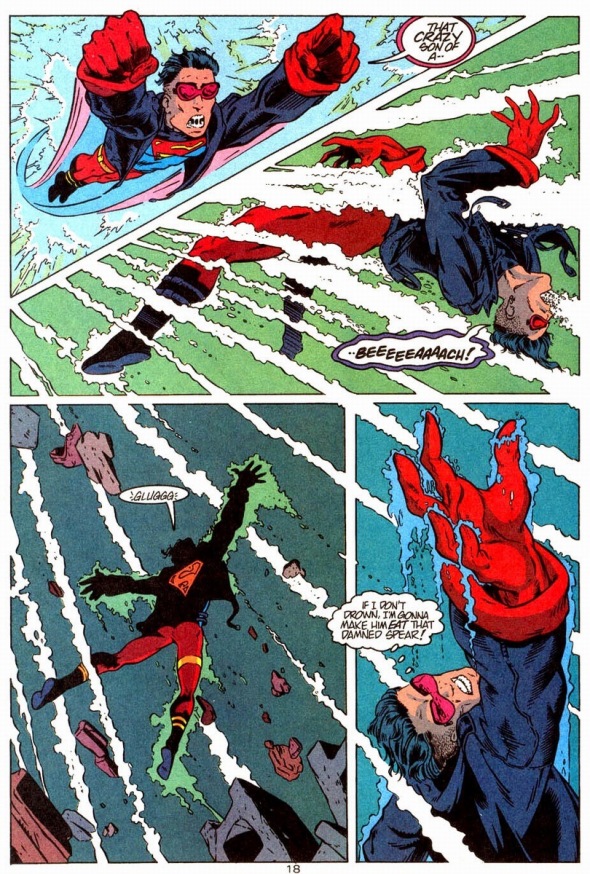 The beard really does make his threats scarier, doesn’t it?  Next time, Batman!

2 Comments on “Aquaman vs. Superboy”