You want a good ol’ fashioned vengeance brawl?  Of course you do.  Because after a former love interest/supporting cast member of the superhero gets killed, our next thought ventures immediately to something like, “This [superhero] is going to beat the crap out of [supervillain].”  But today, we jump to one of the most famous death scenes in Marvel comics – that sickening moment when Bullseye impaled Elektra with her own sai in all its full gory glory.  And with her death, I know what you’re really thinking.  You’re right: Daredevil is going to beat the crap out of Bullseye.  We jump to Daredevil #181, written by Frank Miller and drawn by Miller & Klaus Janson. 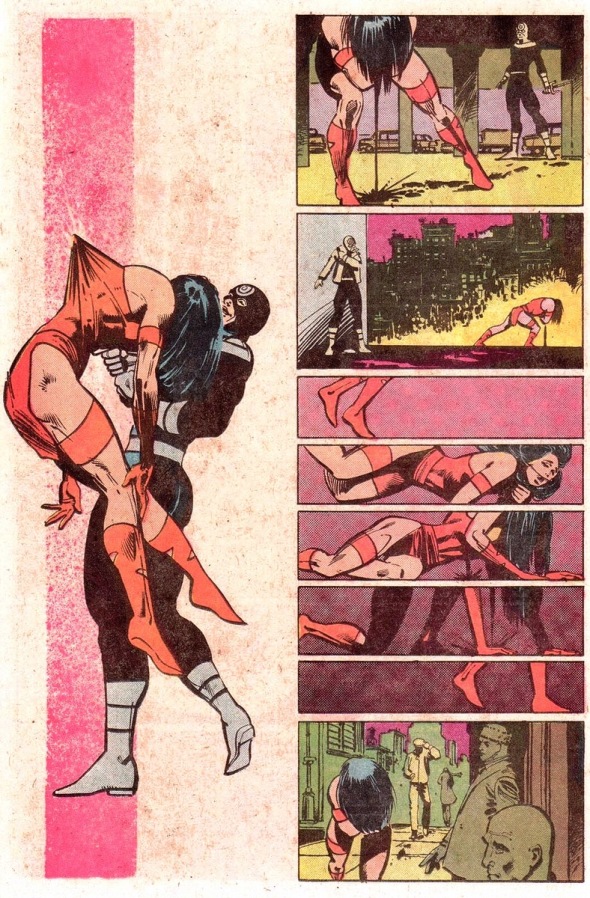 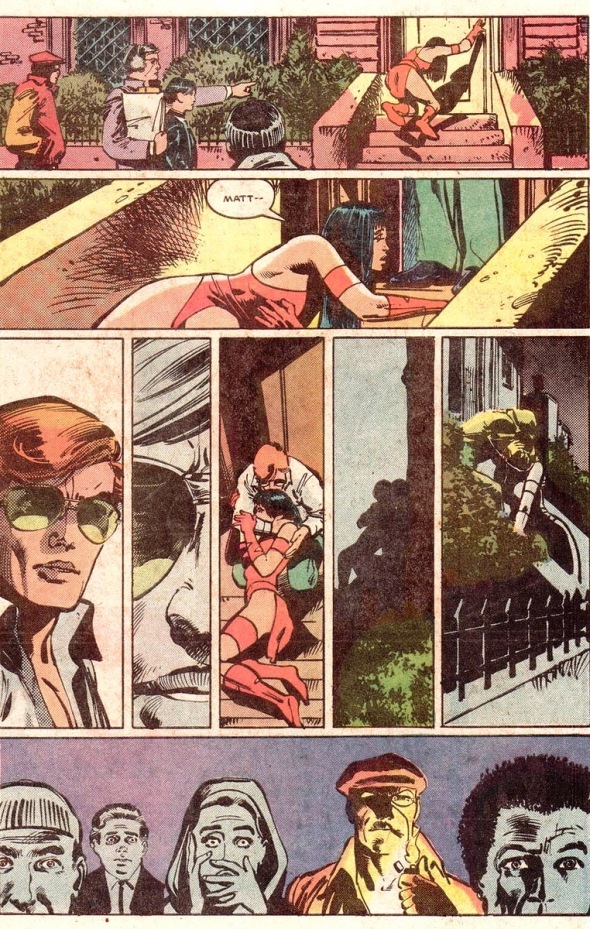 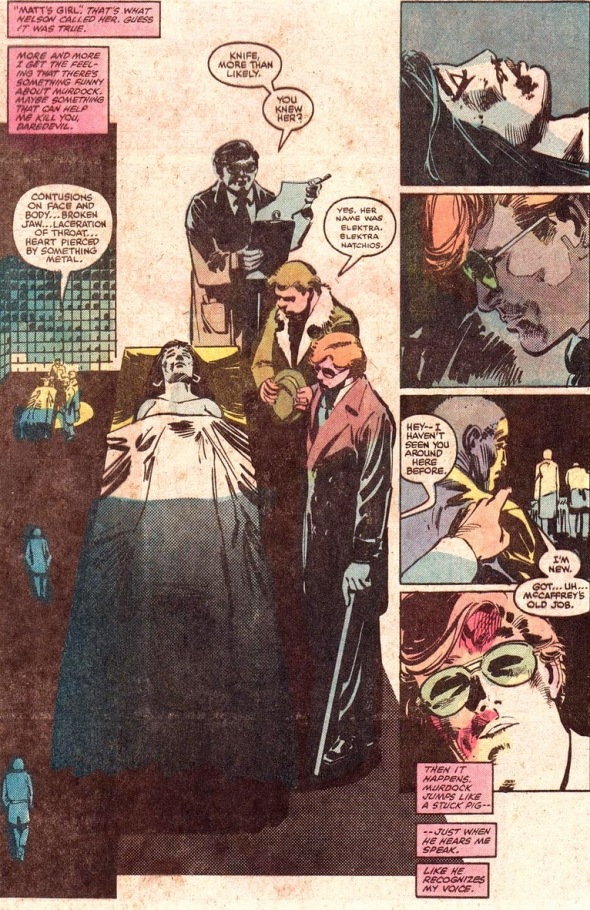 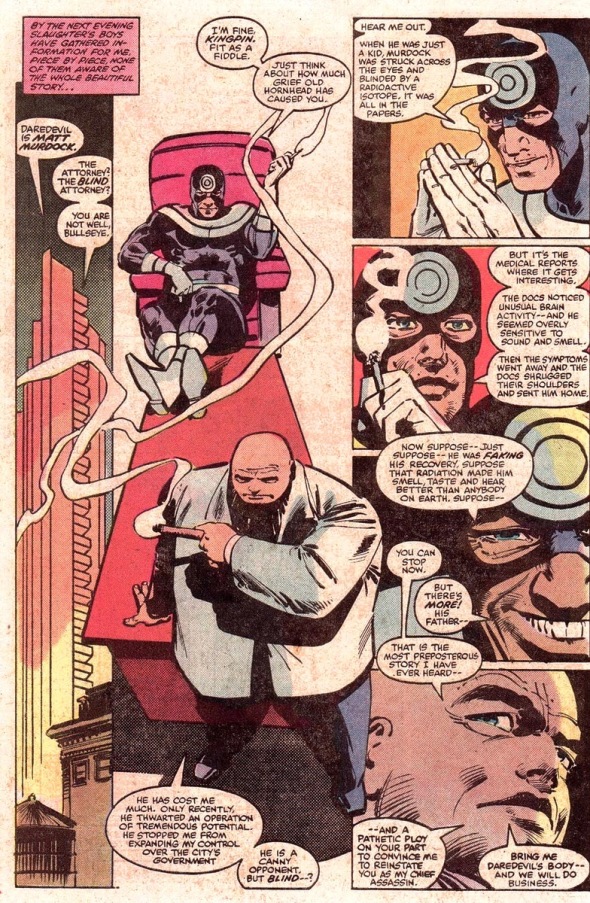 There’s a delightful irony in the Kingpin’s quick dismissal of Murdock as Daredevil in that Frank Miller’s most famous story involves the Kingpin discovering that Daredevil actually is Murdock.  But Bullseye doesn’t confirm any of that for another decade or two down the line.  So how does Daredevil throw him off the Murdock trail?  Y’know how: the simplest superhero trick in whatever disguise/feint book every superhero’s required to read before they go off and billy club bad guys.  Also, Bullseye’s a moron. 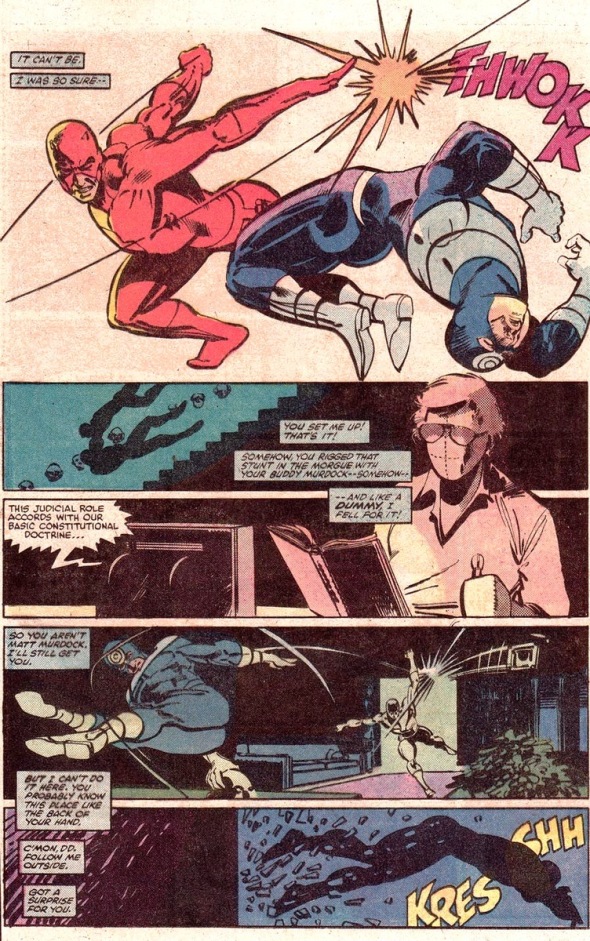 Notice how Murdock’s not quipping?  Not ranting or taunting?  Not doing anything but ramming his fist into Bulleye’s jaw?  That’s some cold ninja shih tzu right there.  It’s the moments when superheroes don’t speak that should freeze the bad guys’ blood.  When they’re taking the fight seriously enough not to multitask with silly dialogue or angry monologues – instead just a combination of punches, concentration, and the total decimation of whoever managed to push them to this point.  To bring in some more symbolism to their fight, on the pages below they run afoul of a passing train.  The last time the two fought, Daredevil saved the unconscious Bullseye’s life from being run over a similar train.  Moral responsibility totally sucks sometimes. 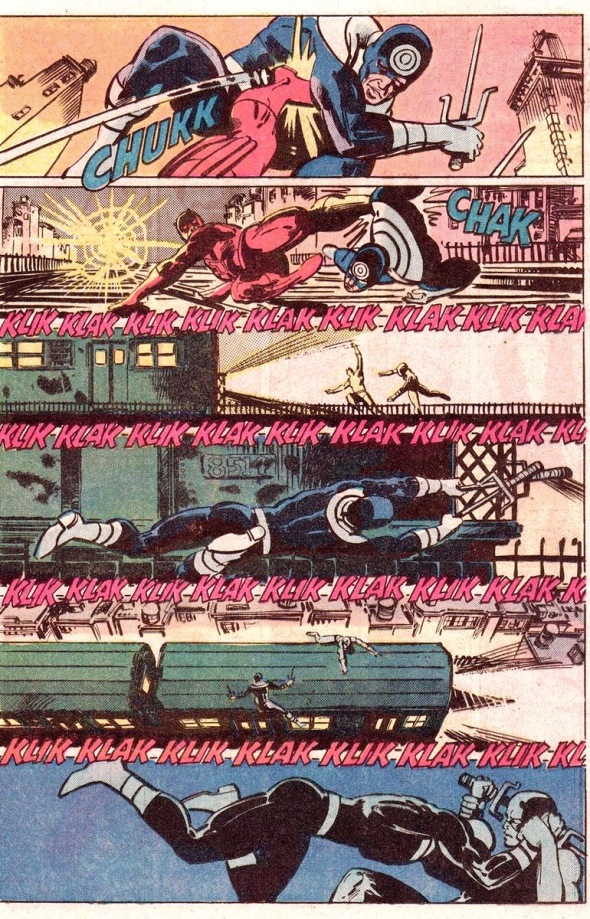 Okay, so I lied.  Daredevil says six words.  And when I previously mentioned moral responsibility? That was before Bullseye killed Daredevil’s first lover.  Some lessons take more than one try for even the smartest superheroes to understand.  And just like how we rely on the Joker’s bat-guano crazy rants of why he’s obsessed with Batman to cement his arch-nemesis status (though every arch-nemesis for every superhero seems to go on at least one obsessive monologue about their chosen enemy at least once per arc they appear in), Bullseye shines the same way here.  Finally, if you can learn one important lesson from this fight, bad guys shouldn’t kill Daredevil’s love interests.  He isn’t great at dealing with that kind of trauma in a healthy way. 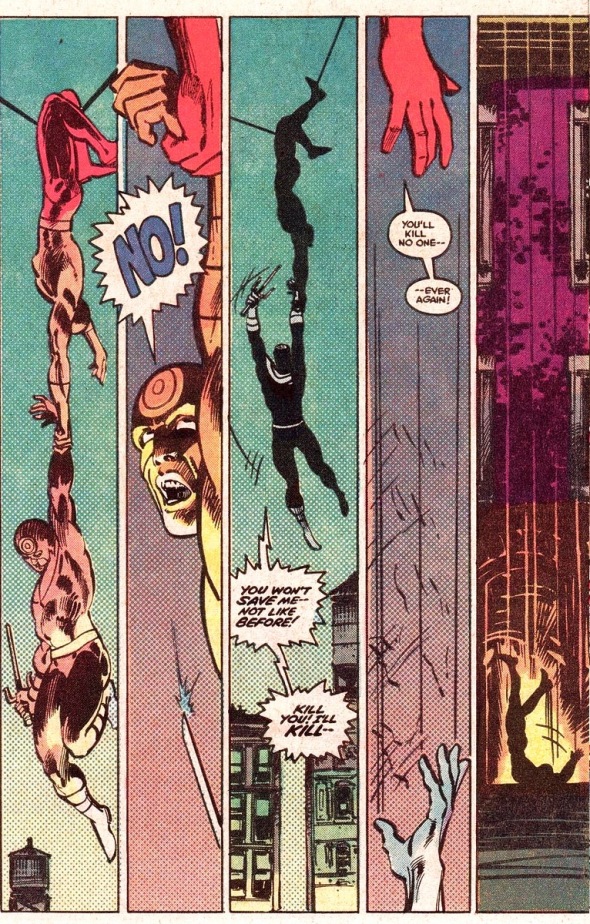 We advance to modern Daredevil for our next fight on Friday!  Get excited!