The man has some feelings to work out.  James Rhodes, the owner of the War Machine armor (think of Iron Man with more bullets), gets his second real shot at being the superhero the same comic Tony Stark “dies.”  Mainly, it’s out of necessary, as criminals still need to be stopped and Iron Man comics still need to be sold.  But unlike you or me or practically anyone else in the Marvel universe, Rhodes isn’t happy about his new exciting title.  No, actually he’s quite angry (as you guessed from the title). Here’s some scenes of Rhodes/War Machine raging around from Iron Man #284-291, written by Len Kaminski and drawn by Kevin Hopgood & Tom Morgan.

So I’m sure in the cynical depths of your comic-loving soul, you balk at my statement.  Please, you say, all superheroes get outraged occasionally.  How bad can he be?  Well, you know: 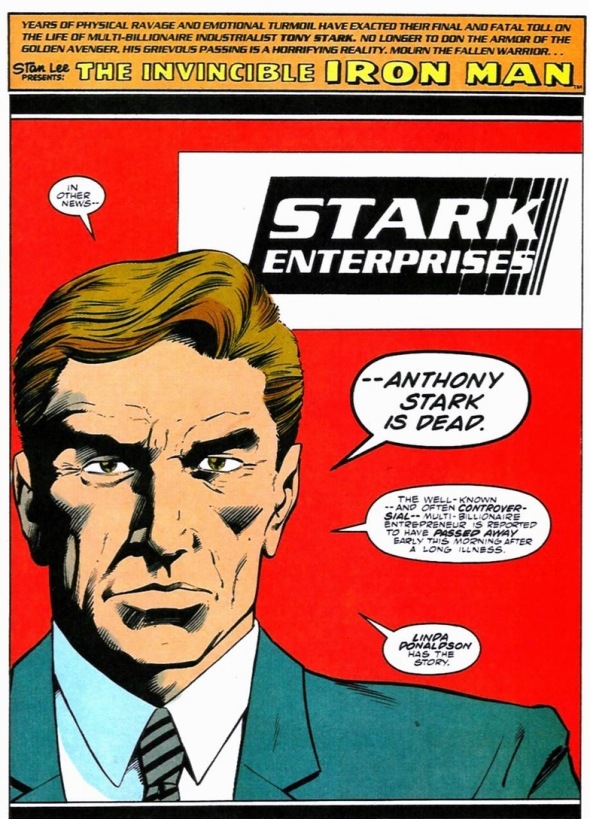 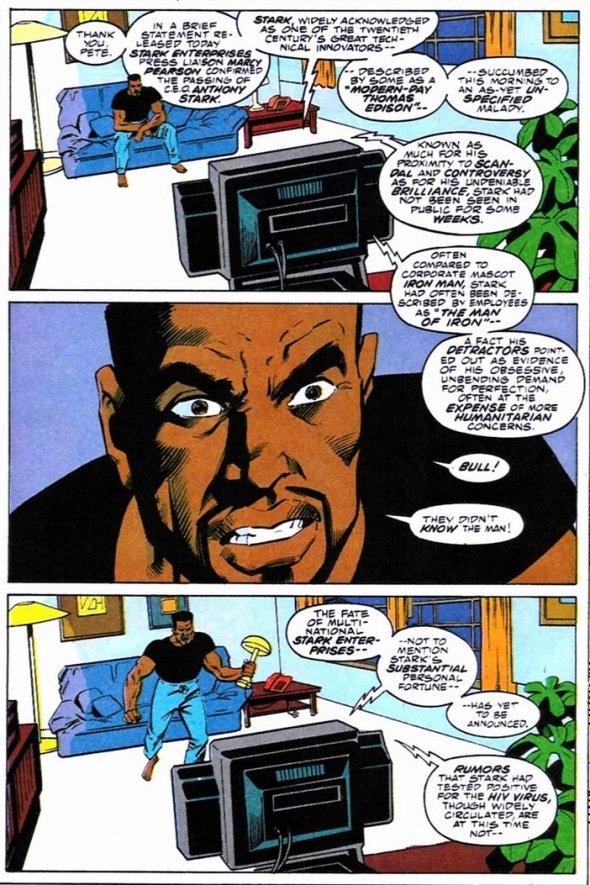 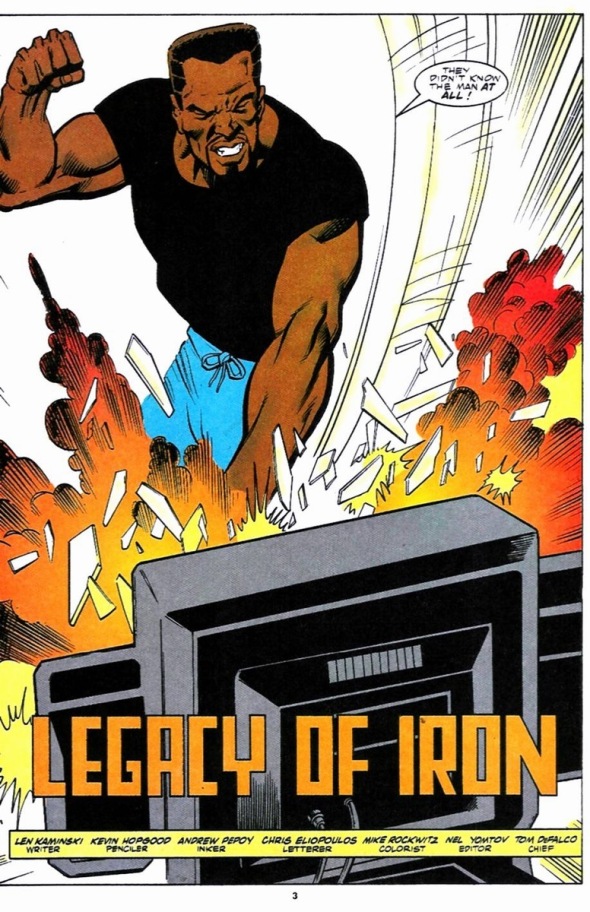 Rhodes has no super powers.  You just witnessed a normal man put a lamp through the television for something that Fox News makes an entire network about.  So now with no Tony Stark to hang out with and no Iron Man to lie to people about, Rhodes will have to spend his time productively.  And for someone who loves and admires Stark so much, he’s certainly not happy about following his final wishes.  As the imaginary Tony Stark rattles off all the qualifications that make Rhodes the superhero we all know he should be (mainly being a good person), understand the lunacy of Rhodes’ misplaced anger.  If I came to you announcing that I’m going to give you the physique of an Olympic-level athlete and the ability to shoot lasers out of your eyes, would you just shout, “Eff you!” before shoving me away? No, because we’re not crazy people.  His rage continues unabated for the next eight issues. 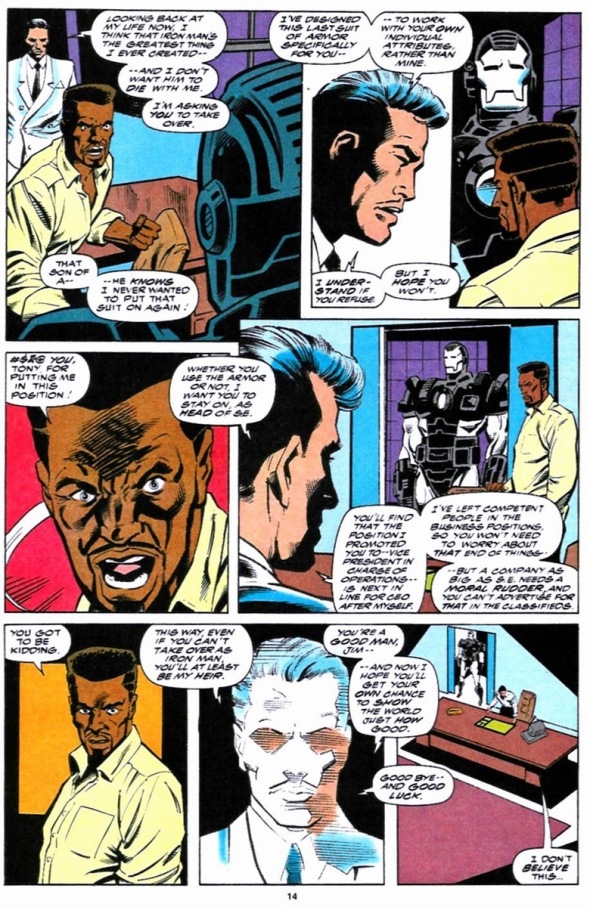 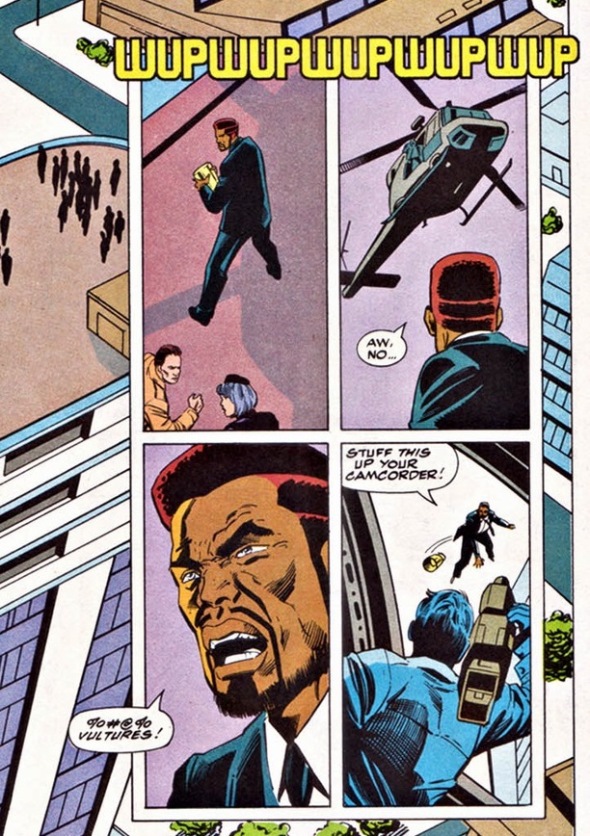 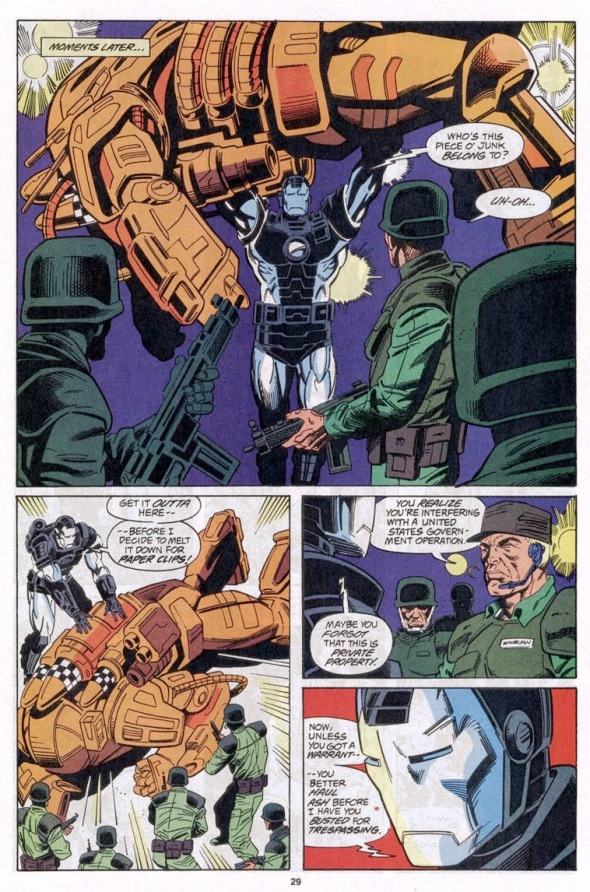 I’m not going to spend 600 words to announce over and over again – look how upset War Machine is! Don’t you worry, because War Machine possesses a superpower that delights me far more than yelling at the ghost of Iron Man.  Witness the unparalleled majesty of Rhodes’ combat banter.  His references are horribly outdated.  His references are pretty much nonsense.  It builds absolutely zero suspense.  And you’re welcome in advance. 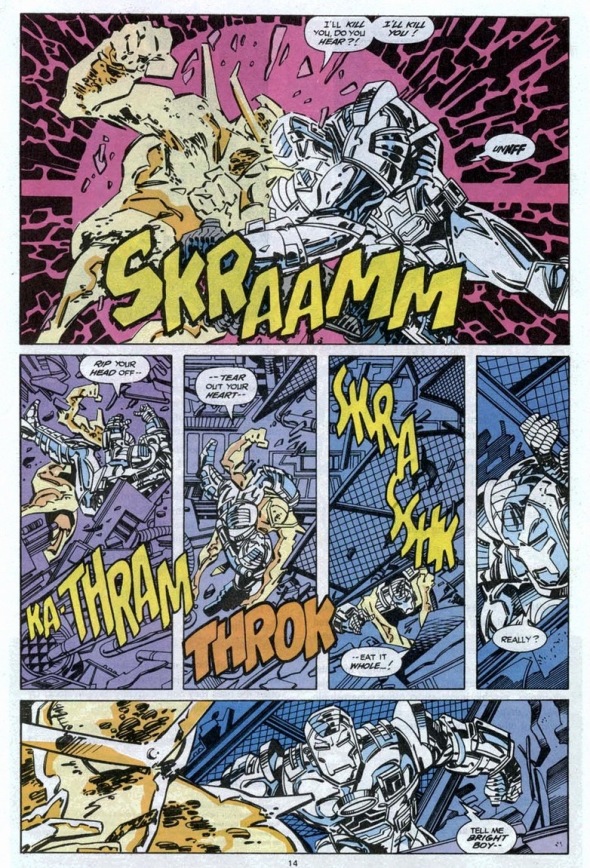 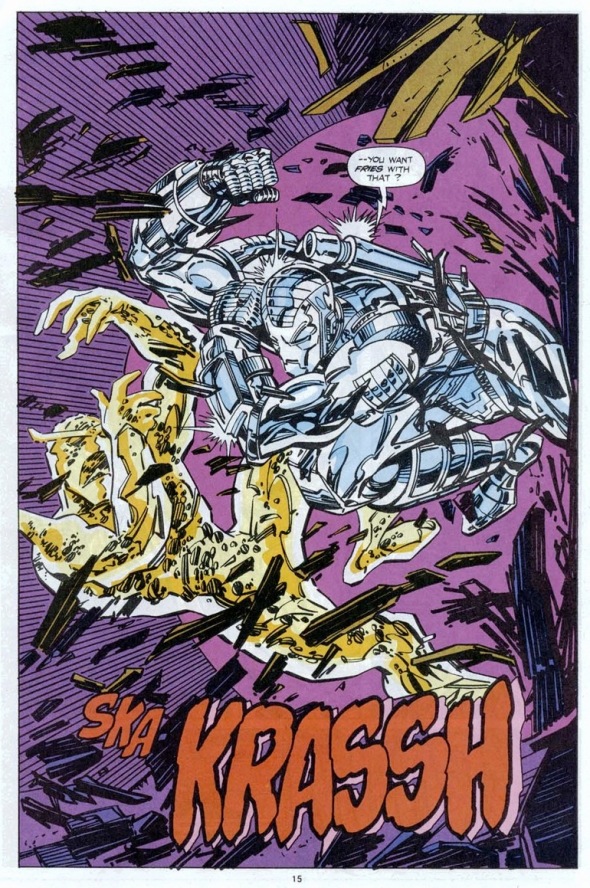 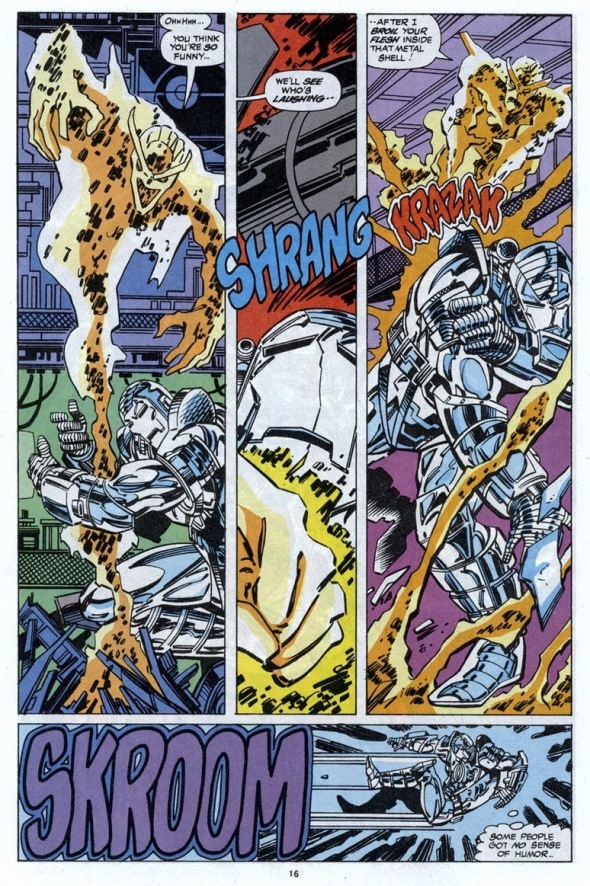 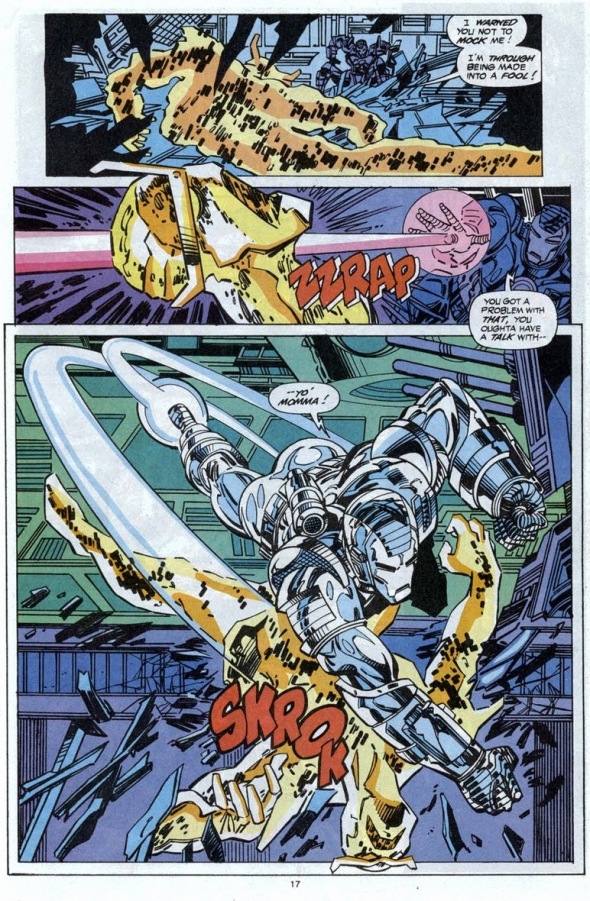 So as you’ve figured, Tony Stark isn’t dead.  Actually, you know for a fact he isn’t because I did a previous article about his coma dreams and whatnot that takes place during this arc.  War Machine finally gets put back into the truth loop about halfway through this – not to Tony Stark’s fault as he spent most of the first half being unconscious.  And because I’m about to show you the pages of Rhodes discovering the truth, you should know that Rhodes reacts poorly.  What’s the proper mood when you find out your best friend isn’t actually dead?  Elation?  Surprise?  Happiness? 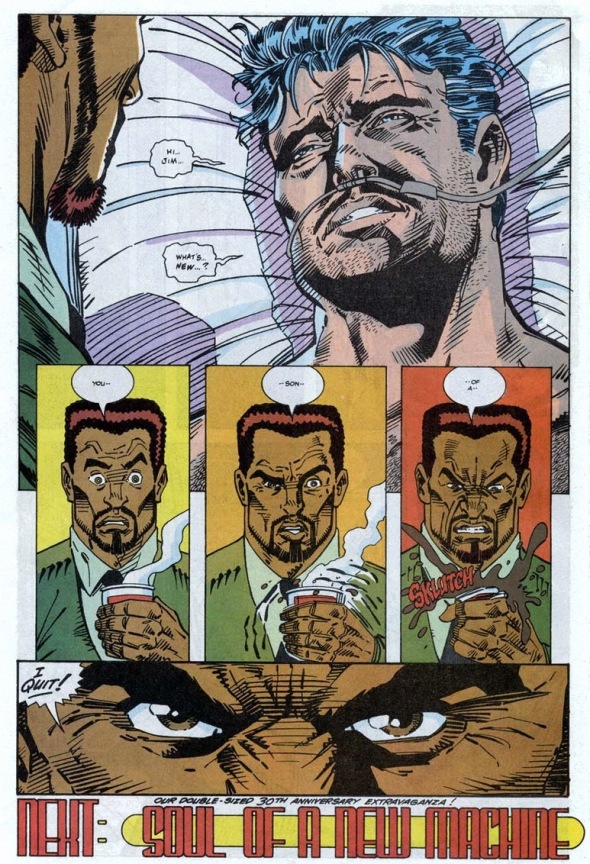 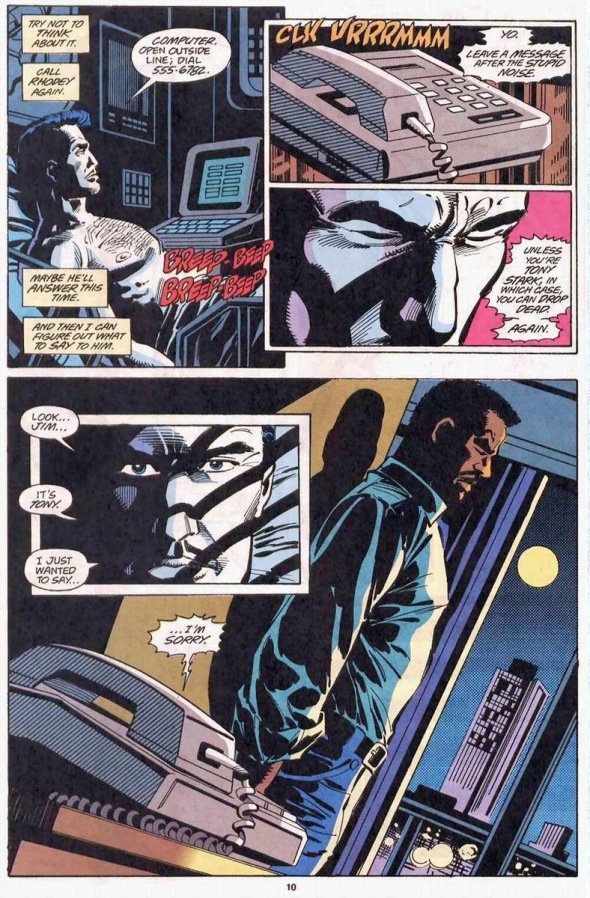 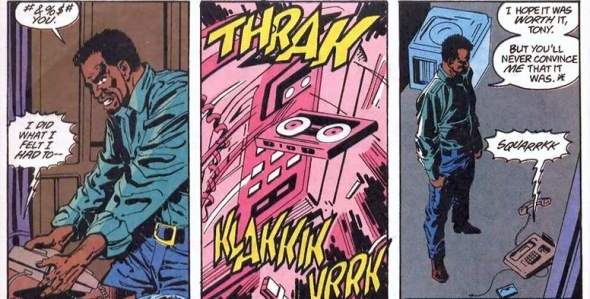 For a man who’s entire superhero identity is constructed using technology, Rhodes really hates electronics.  In the past decades, Rhodes has slowly morphed into the stoic demeanor and good-natured humor of an ex-military/superhero making his way as a normal man in an insane comic book world.   But not for a while.  If War Machine isn’t complaining that he has to fight crime even though he doesn’t want to, mom, I just got home from school so let me go to my room please, then he’s spending his time having shirtless bedside conversations with his string of lovers.  He leads an enviable life, even if he doesn’t notice.  And here’s some more combat banter: 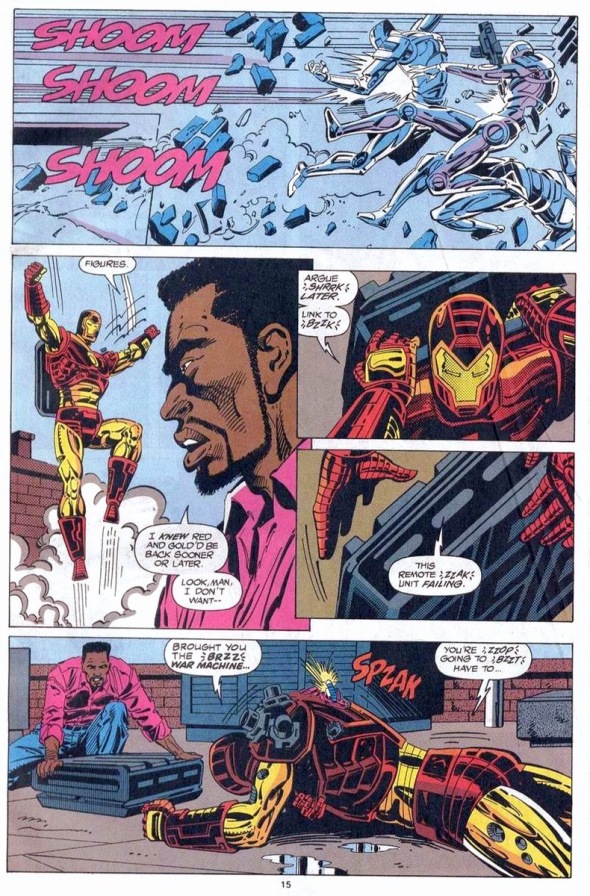 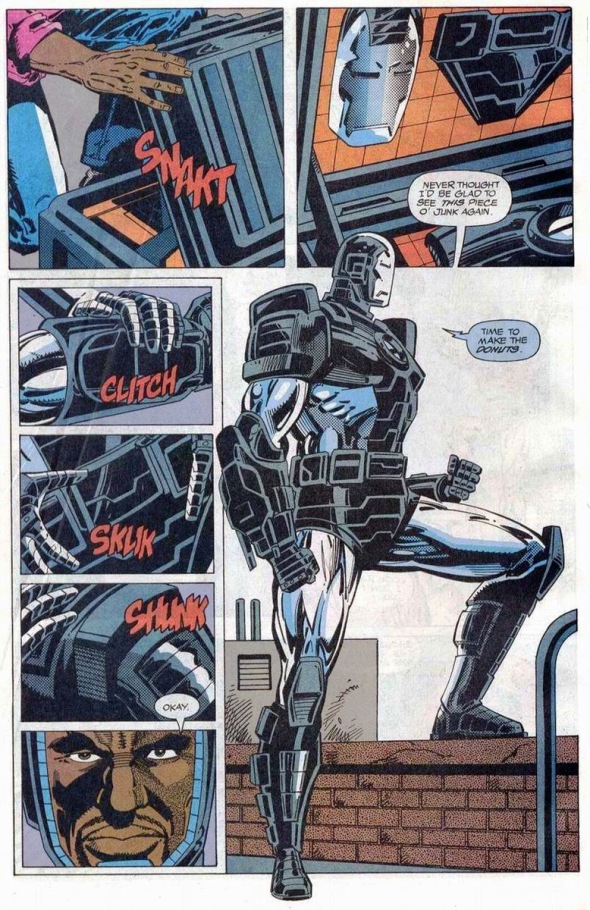 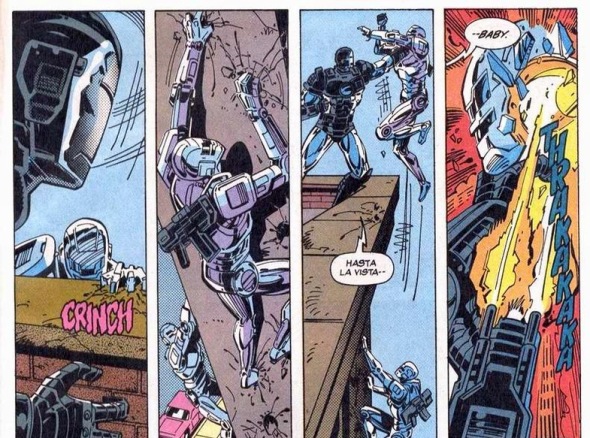 Look, Rhodes and Stark end this arc as friends again.  The status quo must remain strong. Iron Man, in all his bed-ridden glory, must convince War Machine not to be a little b-word and accept that the world needs a gun-toting making-dad-jokes Iron Man-spinoff flying around the Marvel universe to blow away robots with shoulder-mounted miniguns.  I don’t want you to surprise you, but Rhodes isn’t happy about this arrangement.  Spoiler alert: he’s angry. 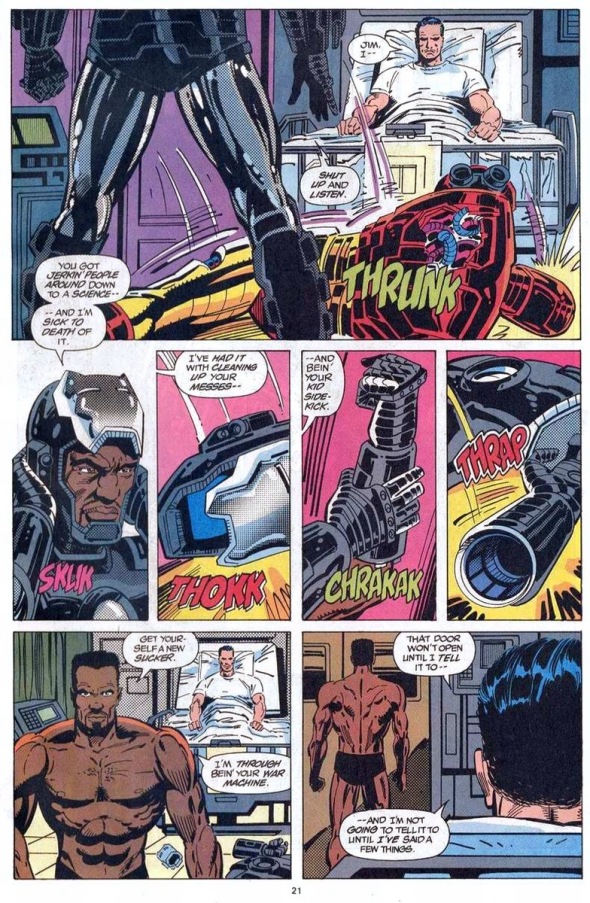 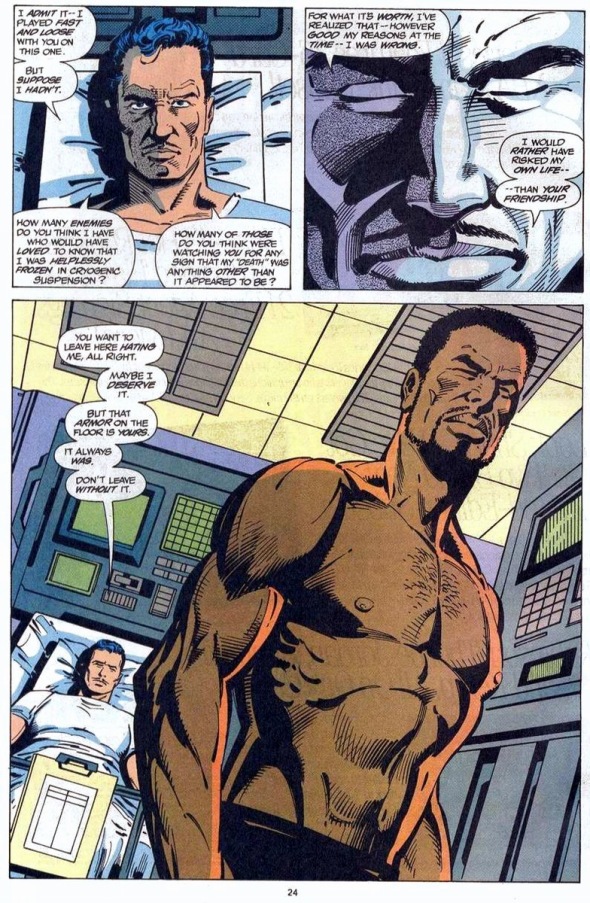 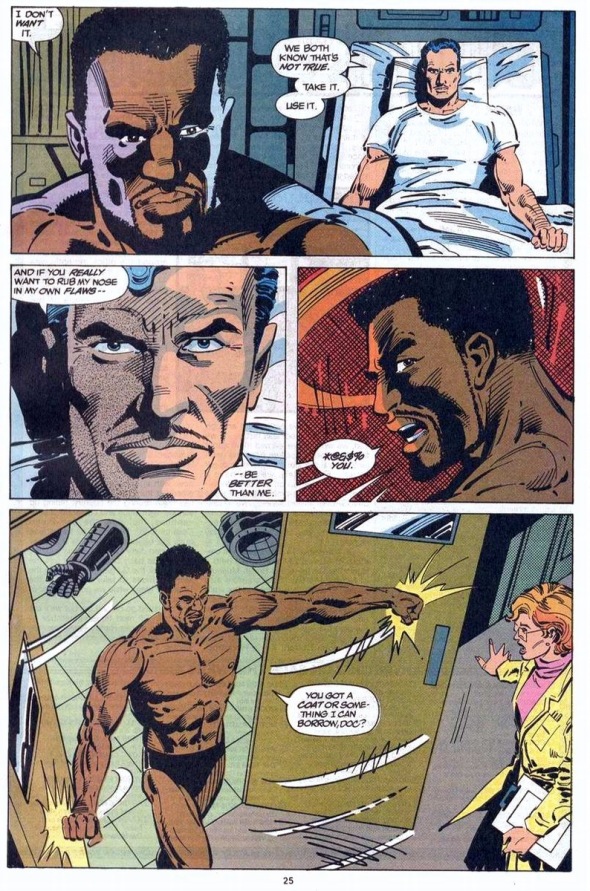 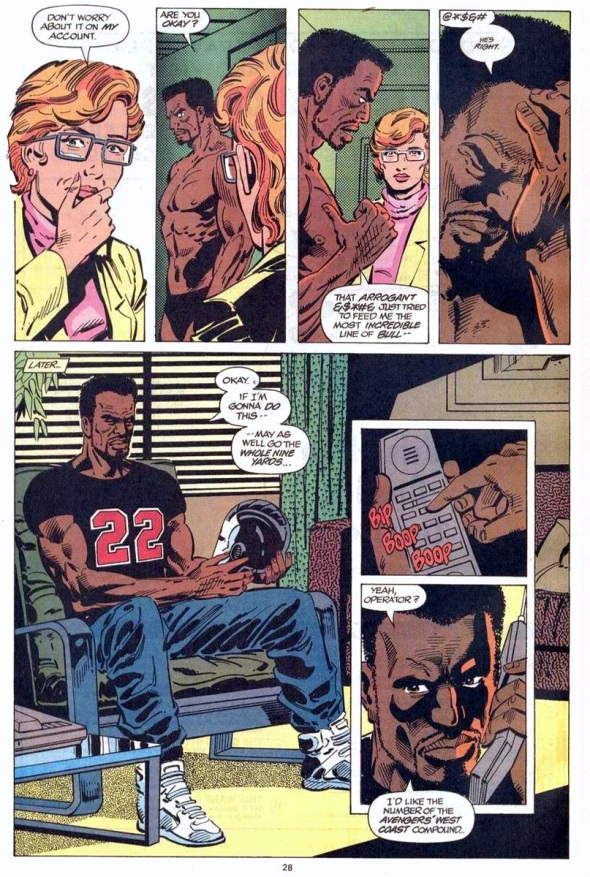 And that’s the story of how War Machine joined the West Coast Avengers.  Next time, Batman and Superman!